I’ve come across a fair share of vintage clothing stores in Singapore. In fact, I’ve spoken to the guys behind Death Threads, and have visited other stores such as Retro Gate.

Yet, one thing I always found lacking in the second-hand clothing market here was its feminine clothes. My shopping options at these places were often limited to pullovers, tees, and windbreakers.

I was thus pleasantly surprised to find out about The Kint Story, an up and coming second-hand store that aims to change people’s minds about fast fashion.

The term “Kint” comes from the Japanese word Kintsugi, which represents the art of repairing broken pottery with gold lacquer. The veins of golden alloy celebrate these imperfections rather than to disguise them, which is what Elisa and Yushu, the two co-founders of The Kint Story, believe in as well.

Elisa and Yushu both met through NUS’ Overseas College programme in 2016 while they were in New York. They stayed together for a year, and returned afterwards to finish their final semester.

By coincidence, the both of them entered a Google training programme called Digitize, which included a 6.5-month stint at an e-commerce company. Towards the end of their contract, an incident sparked the change that came to be The Kint Story.

Given that she doesn’t shop often, Yushu repeats her outfits at work. “One day a colleague came up to me and said, “Eh, you don’t have clothes ah, every time wear the same thing.””

Naturally, Yushu was taken aback by the unsolicited comment. However, she came to realise that this was not a rare incident.

“A lot of women in the workplace face the pressure to look different everyday. For some reason, if you look the same, they might even think you’re unprofessional.”

Both Elisa and Yushu then realised that their friends at work were browsing through Shopee, Taobao, Lazada, during their lunch breaks to shop for outfits, which led them to do more research in that area. 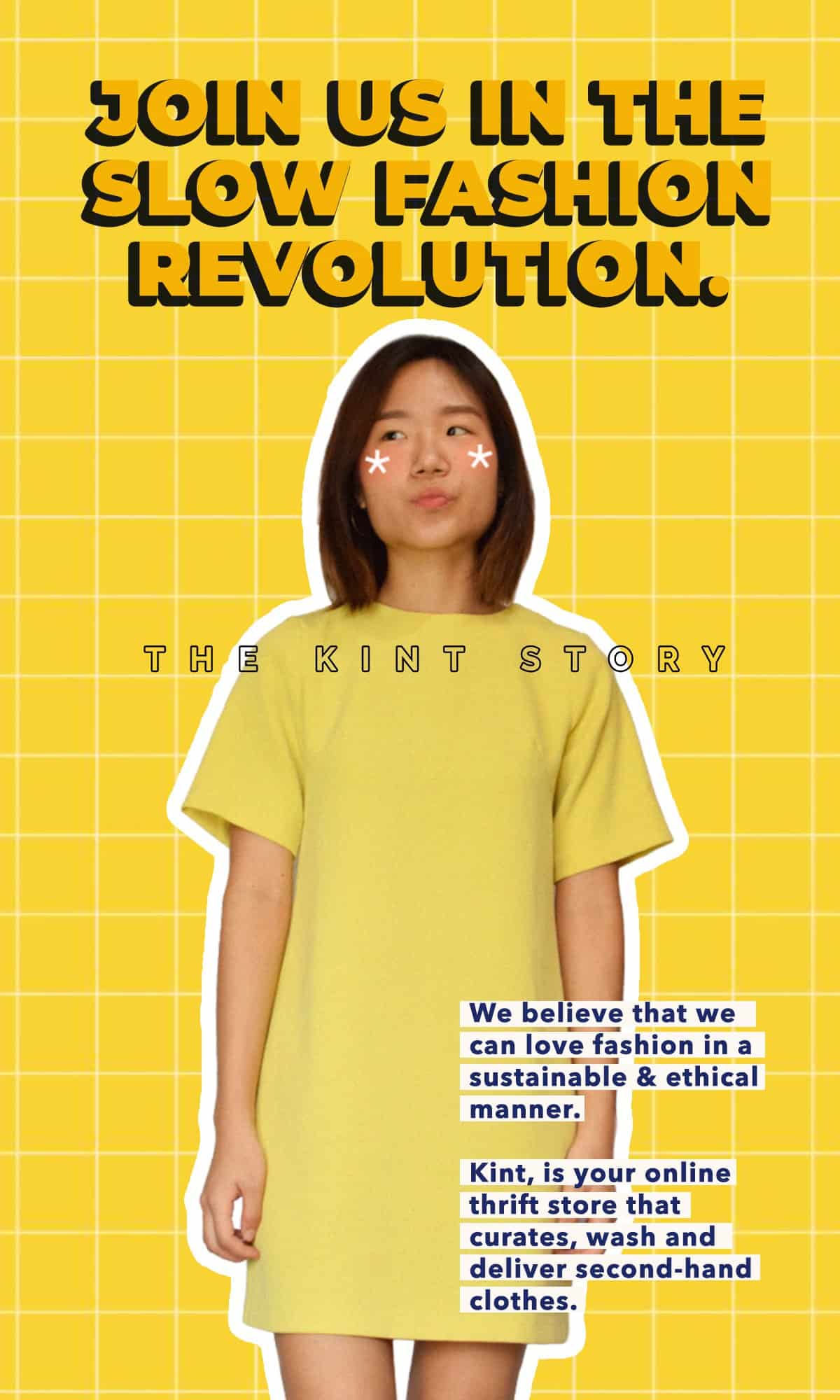 At the same time, Yushu’s younger sister discovered Loop Garms and bought an item from the store.

“She’s only 21 years old, so we realised the younger generation is interested in second-hand clothing. We explored the possibility that there was a market for this, and that’s where we got the idea for The Kint Story.”

Nearing the end of their stint last October, both of them were offered to move to other departments, becoming full-time employees. However, the pair were now aware that their values didn’t align with the brand’s.

At the e-commerce company, their roles were to encourage consumer spending – now that they wanted to promote fashion in a sustainable and ethical manner, they decided to leave their jobs and started The Kint Story. Given that the local market for vintage and second-hand clothing caters mainly to a male audience, I’m curious if that’s the reason The Kint Story team chose to focus on feminine clothing.

“Actually it’s quite the opposite; I think Loop Garms somewhat sparked the realisation that people are into second-hand clothes, but not so much for women. It felt that way to us.”

Yushu mentions that the closest options available for women are often Carousell or physical thrift stores like salvation army.

As with anyone that has had experience shopping from either platform, you’ll understand that the shopping experience may be far from ideal – a far cry from the same experience you get when you go to the US thrift stores.

“The gap is very big – there has to be something in the middle that gives you a good shopping experience online, but at the same time also provides you a good collection of second hand clothes.” One other notable brand in the second-hand industry is Refash, which caters mainly to working adults and those who love blogshop brands. Recognising a gap in the market, The Kint Story hoped to provide a platform to cater to younger girls with unique styles.

Following the recent KonMari trend, it’s no surprise that many offered to donate their clothing as well. While The Kint Story accepts donated items, one thing that they hold a very high standard to is the quality – they do not accept any clothes with large stains or items that cannot be re-worn.

“We also do not accept camp or old CCA tees; the items we rescue have to be items that others would want to wear.”

Not A Bed Of Roses As with every entrepreneurial journey, all bosses face their own set of challenges. For Elisa and Yushu, their main challenge lies in dealing with operations.

“Not a lot of investment is being made into the second-hand clothing industry – it’s not a very sexy industry; not tech-based but I feel like if we could be a lucrative industry it can attract a lot more investments in.”

Yushu then mentions Thredup in the US where they have their own tech and systems in place, but apart from that everything else remains manual.

As such, everything you see on The Kint Story’s website, starting from assessing the clothes that they get, all the way to the modelling, and measuring of clothes – they are all done by hand.

“This takes up a lot of time, and it holds us back because it takes time for us to scale the business too.”

Even so, Yushu has witnessed fruits of her labour. Amongst her most rewarding moments are when they successfully manage to reach out to people who never thought they’d wear second hand-clothing to change their minds – these people begin to see it as an alternative to fast fashion.

A personal moment for Yushu occured a few months after The Kint Story formed.

“My mum was never into the second-hand clothing industry, and while she was supportive of me starting my own business, she wasn’t too keen on the idea of it being a secondhand clothing store.”

“She would always throw away her clothing, but one day she was clearing her wardrobe when she came to me and said, “Can you help me to find a second home for these clothes?” Needless to say, I was very touched.”

Bringing Together A Community On top of these achievements, The Kint Story also attained funding through a pre-accelerator programme, where they were one of the top 3 teams selected by Temasek Holdings to receive a grant.

Even so, both co-founders have not been receiving any salary till now, with the grant money and any profits earned thus far being reinvested into the business. The pair is currently relying on their own savings to tide them through this period.

The other members of the team are all university students that commit their time on a voluntary basis, which helps Yushu and Elisa to focus more on the strategic aspects of the business. 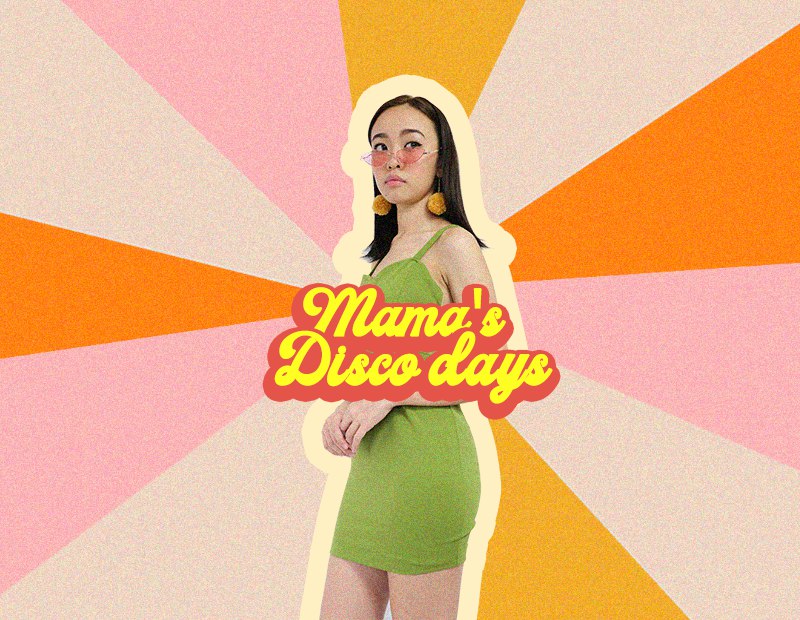 “Our team members each have their own passion and are big on sustainability. One example is the photographer for one of our featured sellers, @nocarrierpls – she is very big on photography and sustainability.”

When it comes to their plan for the future, Yushu mentions that they hope to be a brand every one recognises in the near future. “So that when you say The Kint Story people go, “oh I’ve heard about them”.”

In the future, The Kint Story also hopes to reach out to the Southeast Asian market especially those in neighbouring regions such Vietnam, Thailand or Malaysia and bring them into Singapore.

“Since Singapore doesn’t have a distinct thrifting culture yet, working on something in that area would be something that we want to do.”

To find out more about The Kint Story, click here.