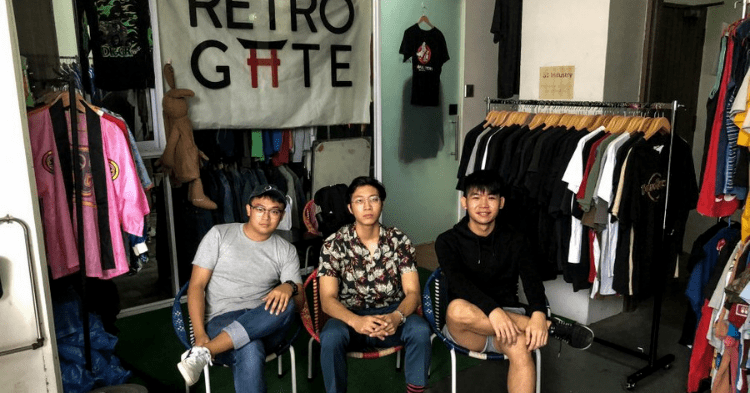 My love for vintage apparel started when I first chanced upon t-shirts that brought back a nostalgic feeling, reminding me of my childhood days. Since then, I’ve always been on the hunt for good vintage deals. There’s nothing quite like the experience of chatting with store owners about a common passion and picking up a piece I fancy at a good bargain.

It’s also undeniable that there is a rise in the vintage trend here in Singapore.

While mindlessly scrolling through my social media feeds, I chanced upon a brand called Retro Gate. I was immediately blown away by their inventory – they have tons of vintage apparel.

It turns out that the brains behind Retro Gate are no other than Ryo (25), Paul (23) and Tao Kwong (25), who met in university as part of their school’s minor program. I got to speak to Paul and Ryo to find out more about their journey.

A Fusion Of Two Styles 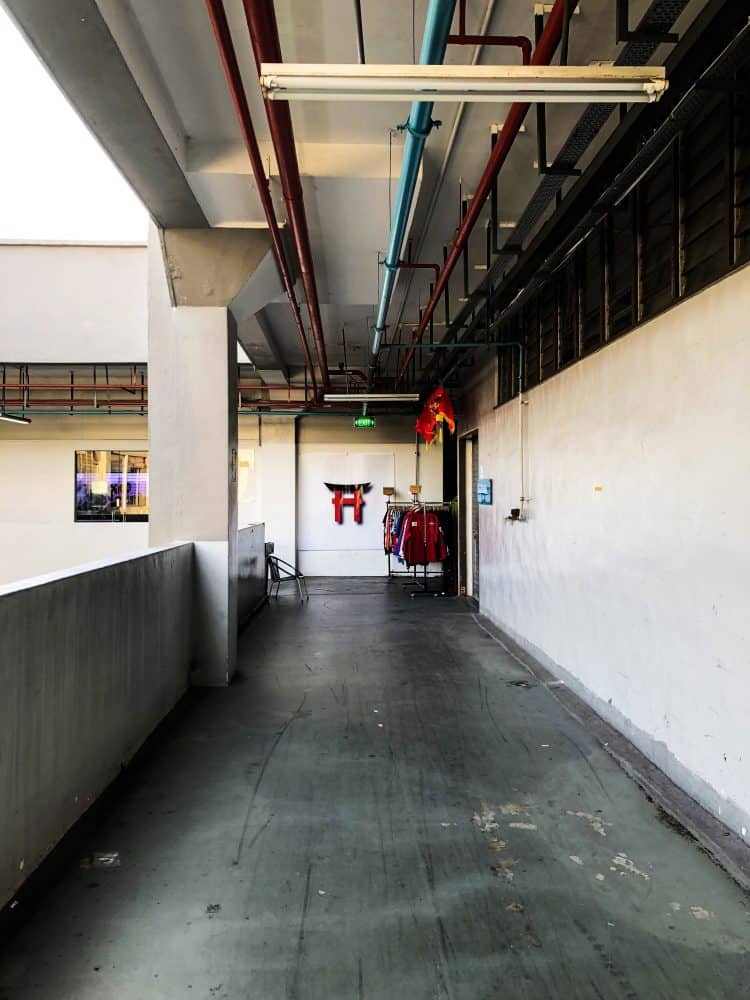 Paul was a dancer in secondary school, which led to his interest in American streetwear brands such as Supreme. He was also a fan of Round Two – a store which buys, sells, and trades apparel and items in USA.

On the other hand, Ryo’s influences stems from his mother.

Being Japanese, she is largely influenced by her hometown’s street culture. Both mother and son would often head to Japan to visit their relatives, dropping by Japanese thrift stores as well.

Ryo adds, “these are called “Furugiya”, which directly translates to ‘old clothes shop’.” Even so, the apparels found in these stores are often relatively pricier.

Having enjoyed old Japanese cartoons and pop culture references since he was a child, witnessing these cultures in the Japanese stores makes Ryo’s experience even more enjoyable.

The two eventually came together, deciding to bring both aspects of American streetwear and Japanese streetwear that they love to Singaporeans.

Coming Up With A Name 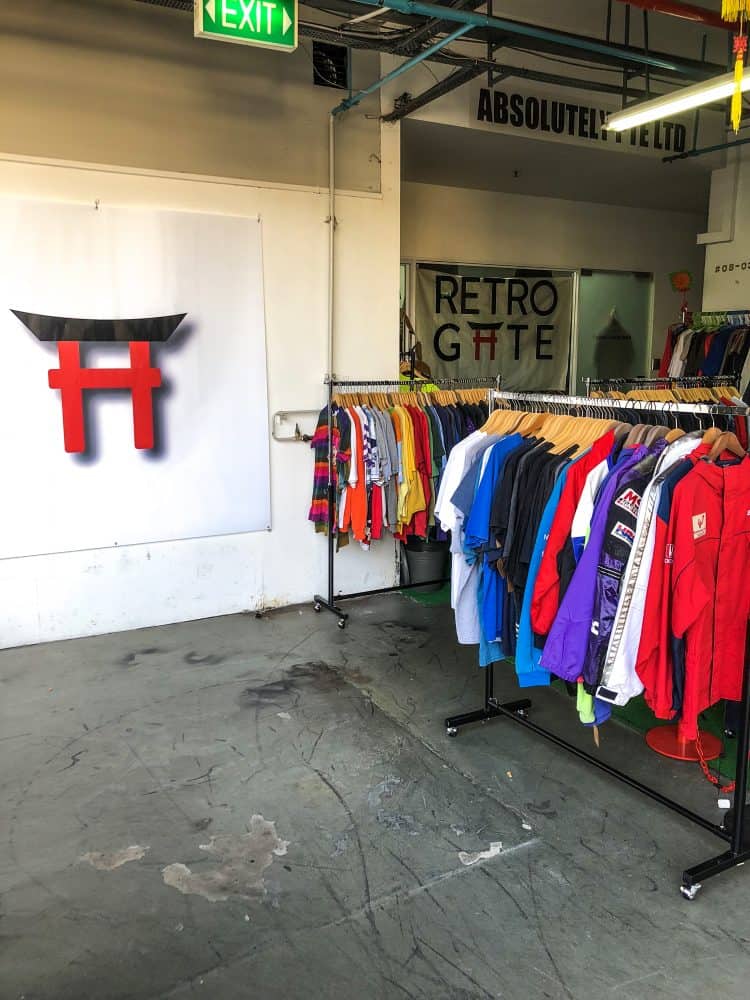 One specific part of the brand that caught my attention was Retro Gate’s logo, where the letter “A” is represented by a Torii gate.

Paul explains that the term ‘retro’ often refers to items from the ’80s and ’90s, and the trio initially wanted to focus only on vintage apparel. However, they later decided that they wanted to provide a gateway for consumers to experience other subcultures of streetwear too.

“The gate symbolizes transcending mediocrity, which I felt was apt.”

As for the moniker itself, they were initially toying around with ideas inspired by other American names such as Flightclub and Footlocker before the name Retro Gate popped up. The Torii gate added an element of Japanese into the picture, representing the mix between the two styles.

A Style That’s Yours

Although Retro Gate has held a number of pop-up stores earlier in the year, what made them decide to open a physical store was enhancing the customer’s experience. After all, it’s only in a physical shop that you’re allowed to experiment with different outfits to find out what you like best. 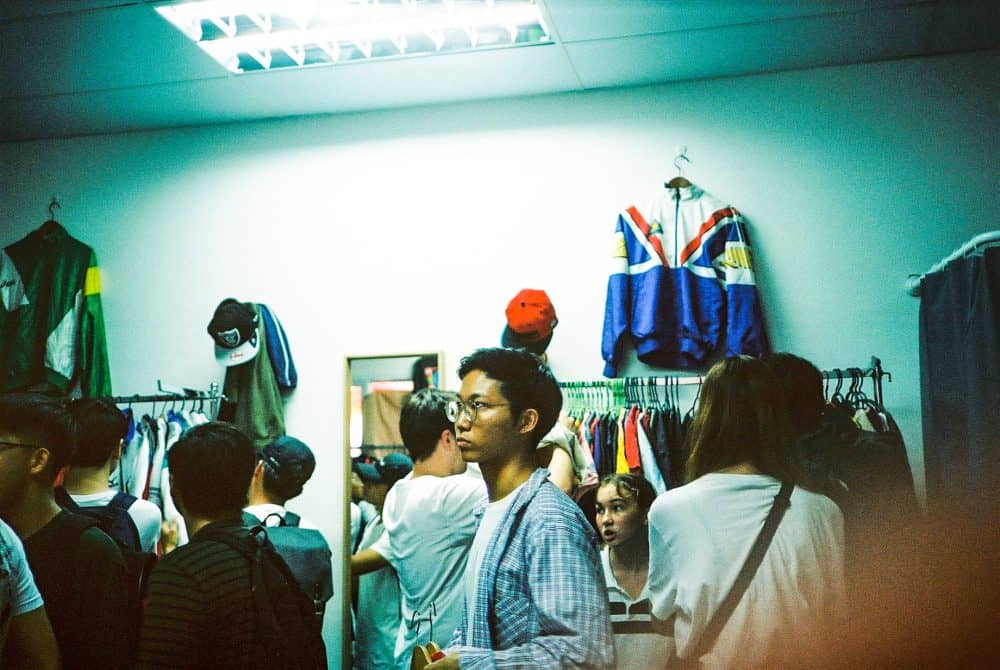 It’s also this particular belief that guides Retro Gate to pride itself in upholding three ‘A’s: affordable, abundant and accessible. Located a short three minute walk away from Tai Seng MRT, with over 1200 products in store at affordable prices, it’s safe to say that the trio has succeeded thus far.

When it comes to memorable experiences in their own vintage journeys, both of them are unable to pick a specific one. Instead, Ryo shares that in Japan – specifically Tokyo – no one judges or questions what you wear. “I really appreciates that as you can be just yourself and have fun too.”

For Paul, it would be the moment where certain customers may not understand a thrifted piece in the store or the history behind it, but it somehow “clicks” with them. Given the variety of pieces they have and stories to be told, being able to share with people these stories is what keeps him going. 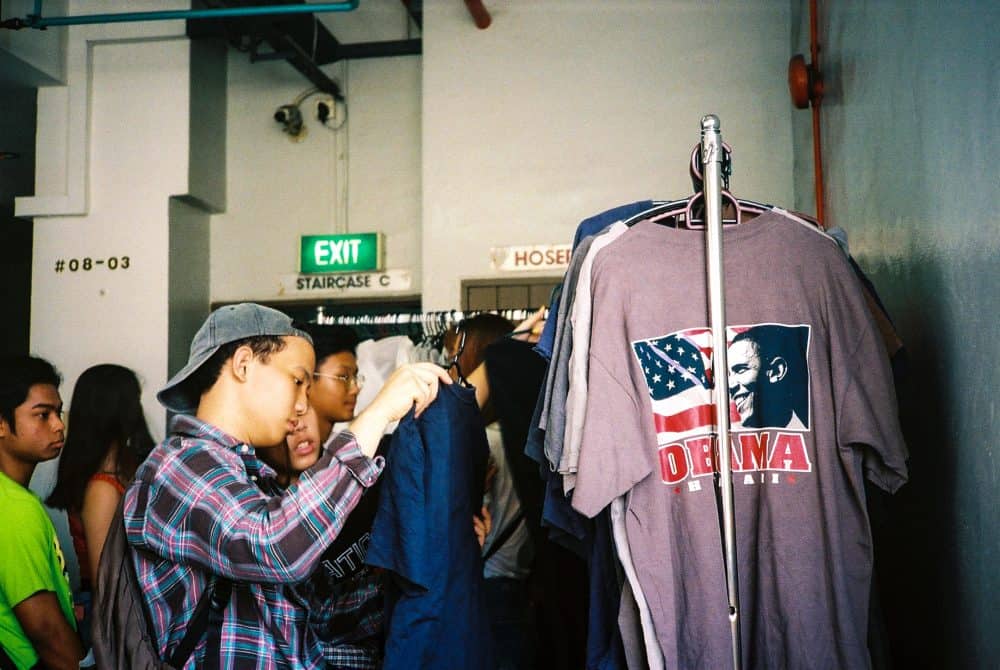 Through our conversation, I come to realise that both Ryo and I have something in common – we’re both Disney fans. This explains why most of Retro Gate’s cartoon section consists of Disney apparel. In fact, Ryo’s dream is to work in Disney – he appreciates that they bring forward a positive message, and since a bulk of his childhood consisted of Disney, it is something that he holds close to his heart.

“A specific piece I like is a collaboration tee with Michael Jackson (the first collaboration Disney did with a celebrity), called Captain EO, which was a 3D film starring Jackson. This tee is something that I hold dear and is not for sale.” 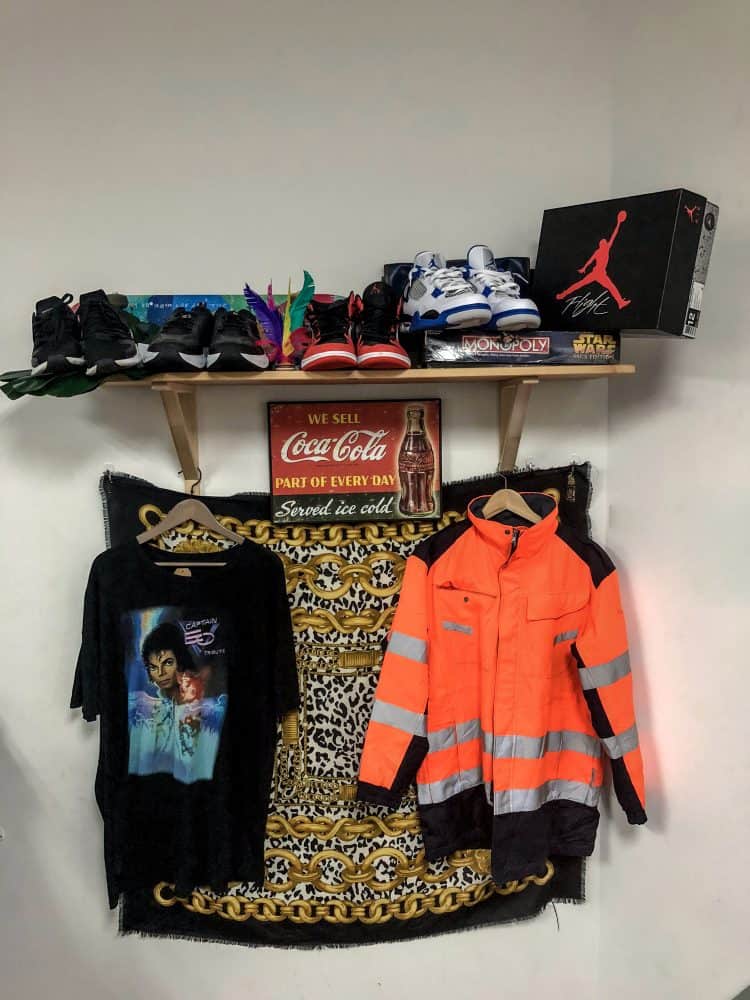 On the other hand, Paul used to like vintage rock tees, but now enjoys pieces that are quirky. He names a security guard vest bought in Japan, and other random things like a cap with a propeller that he owns. Rather than its value, he chooses these pieces for the experience itself.

“Since such objects are foreign, many customers never considered it as an apparel, so I think that that could transcend the kind of style that we want to push in the Singapore streetwear scene. In the sense that you can wear what you wear, and just be you.” 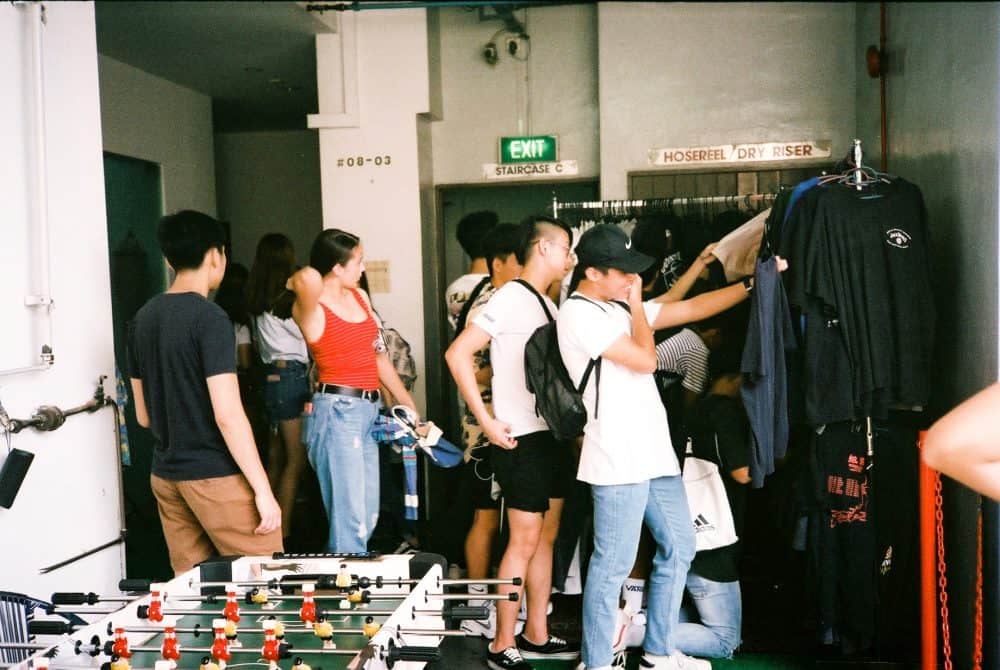 As with any new brand, it’s tough to be running a store.

Paul shares that they are currently striving to meet demands, and in the midst of expanding their inventory. The team is also striving to not just sell clothes, but rather an experience.

“One common misconception about vintage is that because they are used clothes. Certain fades, tears and holes, may look like garbage to one customer – but to another, this is the reason why he’s buying it.”

Despite a growing vintage apparel scene in Singapore, they don’t see the other stores as competition – each store has their own niche. 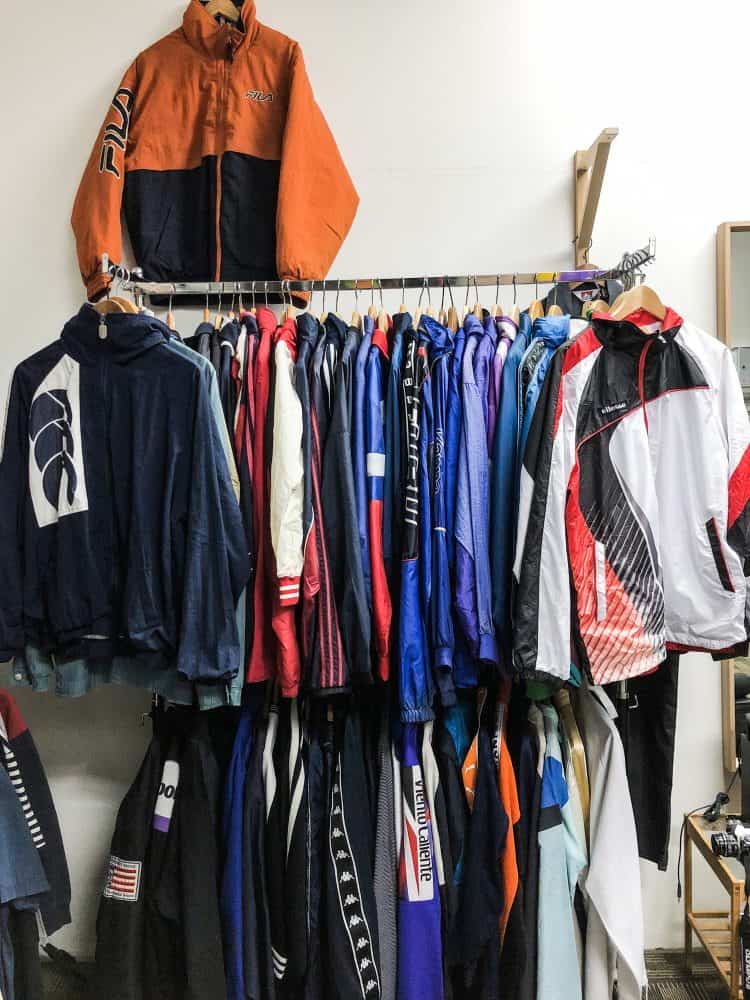 Instead, the team hopes to make vintage community more inclusive.

Ryo explains: “Singapore is quite exclusive as everyone has a status quo that they stick to. For me, it’s about breaking that – it doesn’t mean that if you are a sportsperson, you cannot wear streetwear.”

They do so by taking the effort to get to know each and every person that visits the store, which Ryo says is similar if one goes to a Japanese thrift store. “It makes the experience more personal, and it makes you feel like you are included in something.” 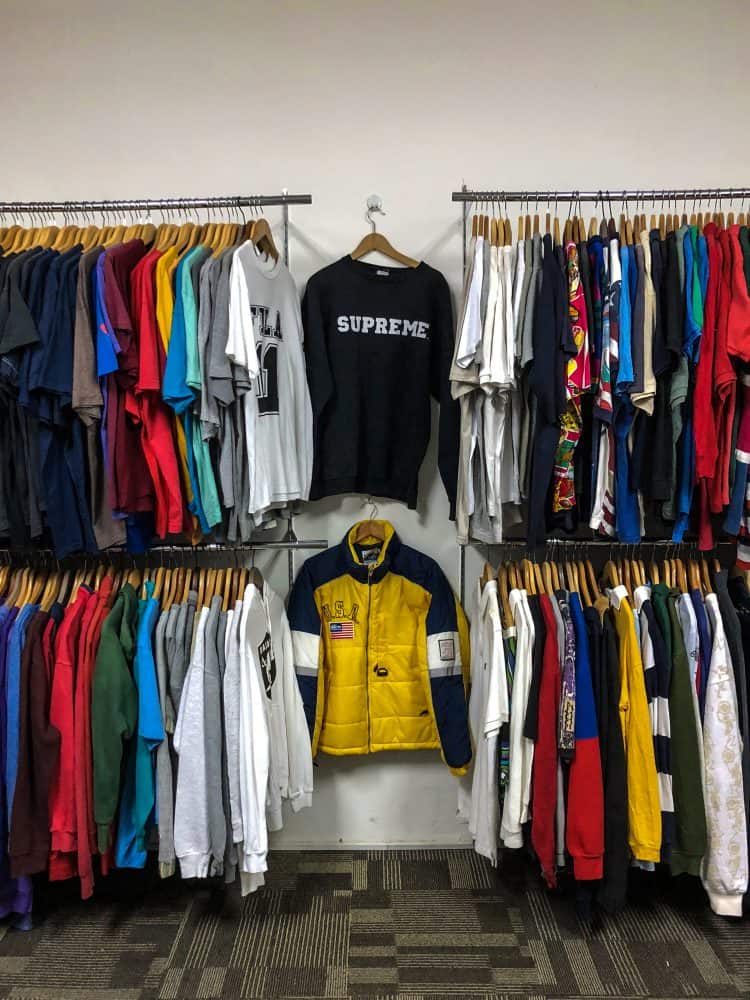 In the future, the trio aims to push the brand even further, and hope to spread the joy of vintage shopping beyond youths. “If your parents want to buy a overcoat, and a typical retail one here costs $200, why not just get it from us at $40 – we can provide the same kind of quality.”

They also hope to house contemporary brands and independent designers. Ryo then chimes in, adding that they want to collaborate with others such as artists and dancers.

Even so, Ryo assures that Retro Gate will always fall back to being affordable, abundant and accessible. In closing, he provides a hint at what’s in store for Retro Gate’s near future – they won’t only be selling clothes.

She Is A Mom Of Two, Scientist By Training And Writer By Choice — Meet Ranjani Rao

The Ultimate Mattress Shopping Hack: How To Buy Branded Mattress From US And Ship To Singapore