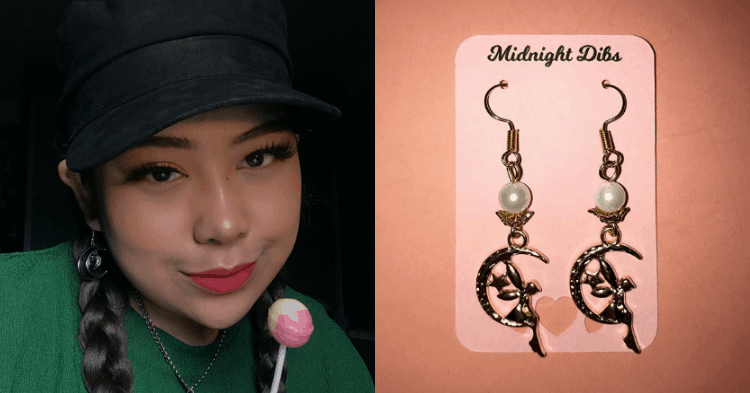 Before I discovered Midnight Dibs, I was never truly interested in wearing earrings. I felt that most designs were rather plain or repetitive, and wearing them just didn’t feel fun to me at all. There was nothing special to most earrings – until I saw Saraphina’s “The Last Knight”.

I had just been lazily scrolling through Instagram when, lo and behold, I saw these two silver swords dangling from fishhook earrings. Not only were they gorgeous, but never had I seen any earring design so simple yet so bold!

My interest piqued, I clicked on the profile of the account – and that was how I was led to Midnight Dibs, the brand that believes in the gender-neutrality of accessories.

The Beginning of Midnight Dibs

I asked the lovely owner Saraphina how she managed to get the idea for her brand and what made her name it “Midnight Dibs”. She shares with me that a friend of hers had been scrolling through Tumblr and had shown her a picture of sword earrings from Valentino’s Spring 2017 collection.

Inspired by it, Saraphina decided to make her own version of sword earrings, one that was more affordable. 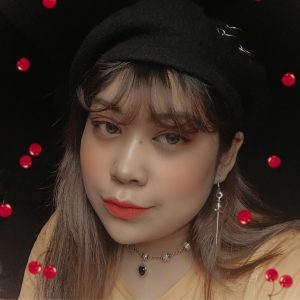 The name of her shop came after she decided on how she wanted to sell her products. She admits, “I noticed that a lot of businesses on Instagram made their customers either leave a comment on the products they wanted to be or direct message them directly with their orders.”

She had wanted to make the purchasing process fun so she decided to enforce the “dibs” rule instead of her customers needing to comment “me” or anything else.

She had also originally wanted to drop products at midnight (hence the “midnight” in Midnight Dibs) but as most of her customers had messaged her saying that they either had work or school the next day. As a result, she decided to drop products a little bit earlier.

Not Her First Venture

I wondered if it was hard for her to start her own business right off the bat, but she shared with me that Midnight Dibs isn’t actually her first business.

“I actually had another startup before Midnight Dibs – I was selling clothes, but I didn’t really like it. I don’t really enjoy designing clothes, and I didn’t feel like it was the right thing for me to do. I was more interested in accessories since I had a collection of necklaces and earrings, and so I ceased operations for my first business last year.

“Midnight Dibs wouldn’t have started without the encouragement of my parents and my friends,” she tells me, “so I’m really thankful for them.”

She’s a one-woman show: even the logo is designed by her, since she does a lot of graphic design work. She is also the one behind the design and layout of her website.

She reveals that sourcing for materials for the accessories were initially tough. Her suppliers now are mostly from different countries, which she finds interesting as new designs are made with materials from different parts of the world. For example, for her evil eye choker, the evil eyes and lobster clasp are from Turkey, the extension chain is from Indonesia and the jump rings are from China.

Now this was something I was always immensely curious about – where did she take inspiration from for her designs?

I then questioned if she had a favourite design of hers.

“Definitely ‘The Last Knight.’ That design is the reason why my shop started, so it’s really important to me.”

Not Everything Is As Simple As It Seems

Still a student herself, Saraphina reveals to me how hard it is to juggle between schoolwork and business. When’s she’s not studying or attending lectures at school, she’s usually at home making earrings.

It’s an incredibly time-consuming process as each earring is self-assembled, and so she usually struggles when she drops various new designs at once. There are even times when she’s unable to meet the mailing dates she has promised her customers, and hence had to pull an all-nighter in order to meet them.

“Although it’s all time-consuming, it’s really worth it – especially when I see my customers happy!”

Her Belief In Accessories As Being Gender Neutral

When I asked Saraphina how Midnight Dibs could contribute to the community of local brands, her response really stood out to me.

“I think that accessories are genderless, and I want Midnight Dibs to be a brand that’s gender-neutral. I really want it to be a catalyst for youths in Singapore, and hopefully to the rest of the world if we expand in the future, to feel powerful – regardless of their gender.”

“For example, most people have this misconception that only girls can wear earrings, and I don’t really agree with that, so I want to change that mindset!”

Saraphina tells me that she would love to have her own store in the future, but in the meantime, she’s planning to participate in more pop-ups in order to spread her creations.

Midnight Dibs will continue to grow and evolve, and I believe that Saraphina will be able to change the idea that certain accessories belong only to a certain gender when that isn’t the case.

Anyone should be able to don on a pair of earrings and feel good about themselves – a sentiment that Midnight Dibs proudly stands for.