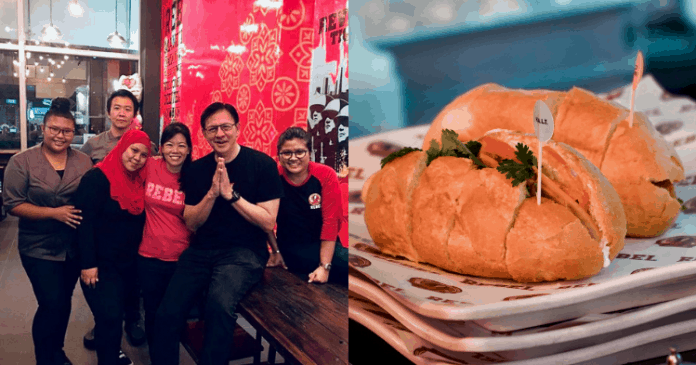 When I first got to know about newly opened sandwich shop REBEL, I was curious at first. Why would they name a sandwich store REBEL?

The curiosity then turn into a tinge of doubt when I read their claims that “a sandwich is more than just a sandwich.”

I head down to find out for myself.

A single bite into their H.A.L.T sandwich and I can see why REBEL has attained all their positive reviews thus far, even being named as one of the best sandwich shops in Singapore despite having opened its doors only recently.

For someone who usually picks out corianders in her food, the combination in this sandwich was delectable. On top of that, their bread is crispy on the outside and soft on the inside. I got to try the vegan sister to my H.A.L.T, which did not disappoint either.

Yet, through my conversation with Sandy Monteiro, founder of REBEL, I come to find out that REBEL is not about sandwiches. The sandwiches are just one of the platforms for engagement, and REBEL is about being in a place where everybody feels that they can be who they are.

Getting To Know Sandy

Sandy used to be President of Universal Music Group in South East Asia. For those wondering why he left such a seemingly valuable position to start REBEL, you’re not alone.

Sandy shares that the music industry is “going through a very weird process at the moment” whereby large sums of money that used to be transacted in a single payment are now being broken up into micro-payments (think purchasing a CD versus Spotify).

Inevitably, it has changed the whole economic modelling for the industry, making it difficult to show long term prospectives.

“We couldn’t tell [those starting out] that you’ll have a great future because – you can’t tell.”

For Sandy, his role meant that he had the ability to sign and develop new artists.

“When you’re no longer confident that the model actually supports that, then it’s time to do something else,” he says. 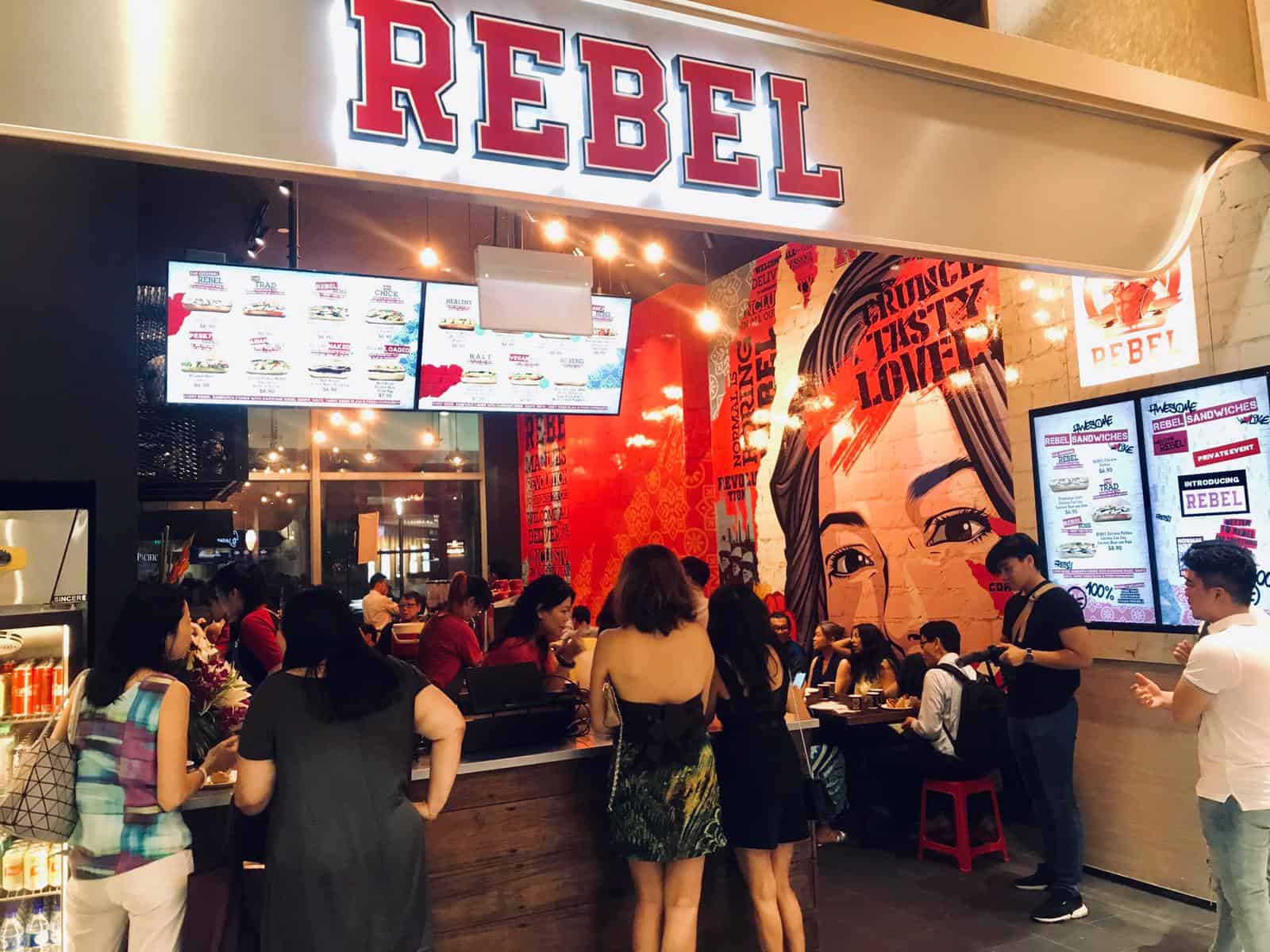 At the same time, Sandy is also passionate about food.

However, he wanted to create something that was of a different structure from the other F&B franchises, where the rich get richer and the employees are often stuck with a meagre salary.

The term ‘rebel’ may carry a negative connotation to some. However, Sandy chooses to look at it from another perspective.

“The difference between the word ‘rebel’ and the word ‘change’ is just the number of people [involved]. If there’s only one person doing it, he or she is a rebel, but when many people start to do it, it no longer becomes rebel, it starts to become change.”

“Everything in the world has thrived because of change, but it takes a certain movement of people to make change happen.”

“We believe there’s a better way to do things, and we want to find ourselves in a positive way to bring change, so that’s where the word ‘rebel’ comes from.” The key part of REBEL and why the brand’s called REBEL is that staff are treated as the potential owners of the brand. This means that on top of a fair industry wage, the staff here also get a percentage of profit-share of the business, which Sandy then wants them to roll into equity. This means that the staff get to own the business.

“All these things – we don’t want to make a big deal about it, but from the get go, we’re on this mindset where “there must be a better way to do it” – this is what Rebel is all about.”

Of all the choices available in the market, why did Sandy choose to sell sandwiches?

The second part then was developing a product that one could easily learn and be confident about, yet is hard to master.

He then recalls his time in Vietnam, where he had the accidental opportunity to try banh mi. He was so impressed by the Vietnamese sandwich he decided to sell it.

“In order to make a good sandwich, you need people to make it with passion, with pride. That’s the kind of spirit we instil in all the staff working with us. It’s easy to teach people how to do it, but they need to do it with passion in order to do it well.” Going further, the REBEL team wanted to create something that was memorable, of great quality and at a price that everybody could reach. REBEL’s manifesto also states “to welcome all to our table” – and this has been translated to the diversity in their menu as well.

A quarter of their menu is vegetarian, inspired by one of the REBEL team members. “He’s my old friend, a long time vegetarian, and he used to work with me at Universal Music,” Sandy shares.

“I wanted to make sure that whatever we have here, it treated everybody the same way.”

In fact, this is true even for the pricing of their sandwiches. All their vegan and vegetarian sandwiches are powered by Quorn, which specialises in making meat-free products.

This inevitably brings to mind the Impossible burger, currently priced higher than a regular burger.

Sandy made sure that their Quorn-powered vegan and vegetarian sandwiches are priced the same as their regular meat sandwiches.

It is these details – such as their eco-friendly efforts and price points for their sandwiches – that most customers would not notice at first, which I come to realise is exactly what Sandy meant when he said “we don’t want to make a big deal about it.”

In fact, their eco-friendly efforts extend beyond the use of plastic-free paper wraps and paper cutlery – the floor of a former house has been turned into tables that customers now dine on.

Not Fitting An Idea Into A Box Through this entire process, the toughest bit for Sandy has been to explain REBEL to others. Regardless of who he spoke to – potential staff, investors or suppliers – most of them had a preconceived notion of an F&B business and “wanted to fit everything into a box”.

I have to admit that before my conversation with Sandy, I was no different – just how different could a sandwich shop be?

In fact, this happened with many potential applicants who wanted to be part of REBEL’s staff – most of them were concerned about wages and other administrative issues – a far cry from Sandy’s ideal candidates.

“I’m trying to find young people who want to be entrepreneurs,” he explains. Many of them do not have the money or the know-how, and are likely to take a loan or fork out a huge sum of their own money.

“Chances are – they’re going to fail. When they fail, either they never want to be an entrepreneur again, or they get set back so far behind in debt that it becomes difficult to try again.”

In this way, REBEL acts as a platform that gives young people a safe haven – they are given a regular salary, but also taught the lessons on entrepreneurship, as well as the ability to gain equity into the business through their efforts.

“I was in my car, after a meeting, taking a bite of a sandwich about 5 years ago when I had the idea for REBEL. So yes, a sandwich can be more than a journey,” Sandy says. He hopes that through REBEL, others can have their own journey as well – in his words, “the food is just the string that ties everything together.”

It’s apparent to me at this point that Sandy has a genuine passion for developing those with passion and the drive – his role at Universal Music South East Asia and the business model for REBEL can attest to this.

Sandy shares that this is due to his own experiences. “How did a son of a headmaster in Malaysia go on to become President of Universal Music South East Asia? It’s because people gave me a chance in life.”

“I want to replicate that on an industrial scale. I can make money anywhere, but can we make a difference in people’s lives in the meantime?”

He adds that watching how his employees’ life, their outlook on life and attitude have changed – knowing that he played a role in that –  is very fulfilling for him. 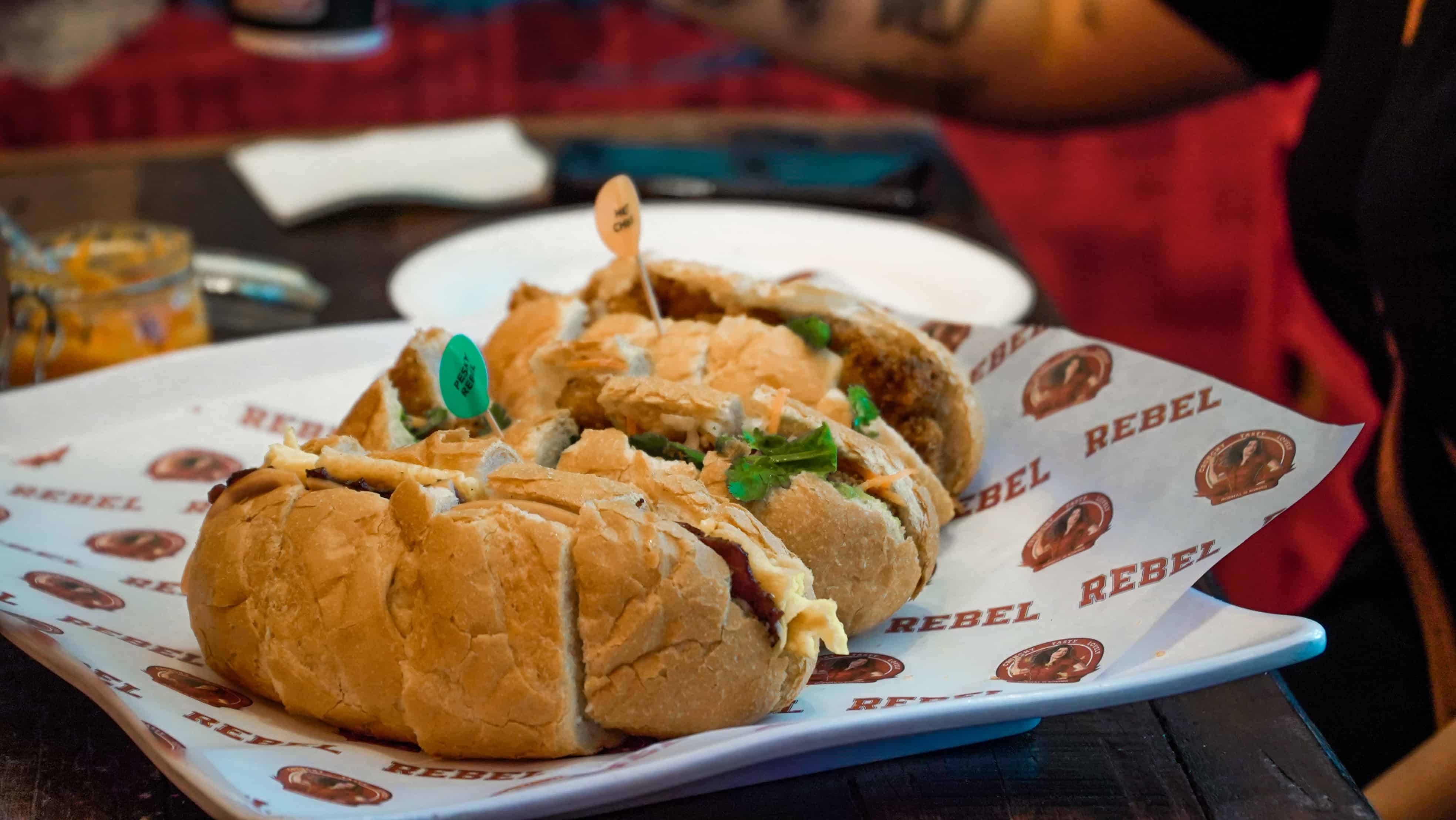 I see the excitement in his eyes as he talks about the positive reviews he’s gotten from different publications.

“Everything that I’ve been thinking about for the last few years – it’s no longer a dream. It is reality and all those people that we’re trying to touch and we’re trying to have an impact on – it’s having an impact on. That’s one of the best things that has ever happened.”

In the future, there are plans to open a few more outlets in Singapore, with plans to expand into Malaysia as well.

As I leave REBEL, I realise that through a sandwich, I’ve had my own journey as well – I now look at REBEL in a different light, and see different possibilities not only for the F&B industry, but for other sectors as well.

Perhaps, what stuck with me most was what seemed to be Sandy (and the REBEL team’s mantra): How do we do it differently and better? We try, we try.