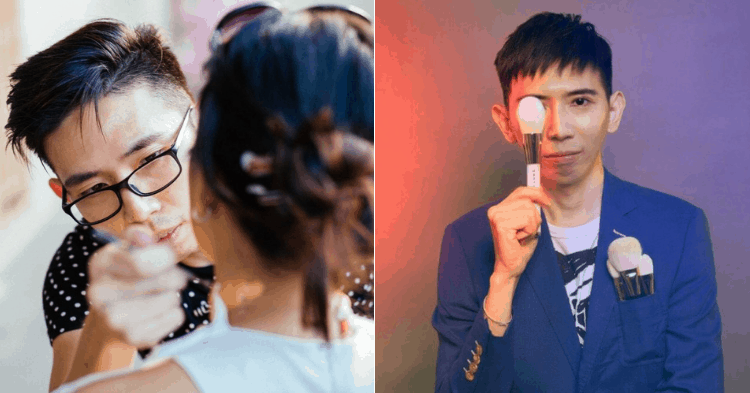 Make-up has remained an art form since the largely forgotten time of ancient Egyptians who applied kohl to their eyelids for a patented smoky effect. What was once regarded the luxury of royalty, has now become the toolkit of everyday heroes.

With the influx of homemade YouTube tutorials, viral Facebook videos and armies of self-declared beauty influencers, it is easy to forget the true professionals out there who continue to hold dear the time-honoured practices and skills of their trade.

Mr Jeffrey Linus Lee is one masterful individual who has braved his fair share of critics and pretentious experts over a decade of experience in the world of make-up.

Usually of an amiable and sprightly mannerism, Jeffrey pulls no punches when it comes down to the seriousness of his craft.

He sharply states, “graduating from make-up school doesn’t make you a professional with immediate effect. This goes the same for people out there who spawn tutorials and claim to be experts, ask yourselves, how many years of expertise do you possess and are you ready to deal with all kinds of face shapes, because you can expect those real world challenges when you throw yourself out there.”

Before his foray into the sphere of make-up, Jeffrey had been a law student and shortly thereafter, a hairdresser who formed a partnership in establishing a salon.

He began mastering the skill of hair styling and considered an additional skill that would improve his client prospects. Deciding between fashion design and make-up, Jeffrey eventually opted for the latter, preferring to offer a full package for the customers at the salon.

Eventually, the partnership was dissolved as Jeffrey turned his attention towards his new pursuit in makeup. “It was the colours that called out to me. One can do wonderful things with colours, plus, great makeup would complement my hairdos, it was pretty much decided.”

Jeffrey signed up for a make-up course and set off on a whirlwind trail.

The talented hairstylist has gone on to oversee large-scale makeup projects ranging from theatre to fashion runways. Both onscreen and off, Jeffrey manages to channel his masterpieces in accordance with his artistic vision.

“The biggest satisfaction I get comes from the audiences who attend the events where my masterpieces are showcased. By hearing the pops and compliments from others as the models own the runway or when someone sees my work on television and offers praises, just makes everything worthwhile.”

Bumps On The Road

In 2010, there was a massive challenge: the search for an expert who would oversee the makeup and hair-styling for 3500 performers for a theatrical performance prepared by the Su Chi Foundation, a Buddhist organisation known for its humanitarian outreach. At the time, Jeffrey had sought the interest of a more experienced professional for the position, who turned down the offer since it was a volunteering effort.

Sometimes hard work pays off in the least expected fashion.

“I went ahead, leading a team of hairstylists and make-up artists in making this theatrical piece work. It turned out well and I never thought about receiving anything back in return. I was surprised to receive an outpouring of coverage from the Taiwanese media, including interviews, which led to a wave of clients and opportunities from a new market.”

It is difficult to displace Jeffrey from his cheerful disposition but there have been exceptional instances.

“I once worked with on the set of a period drama and there were some disagreements with the director over looks. We were both all out to defend our versions of what fit and there were some clashes. I understand everyone wanted the best result for the drama, I am glad it ended up well.”

Jeffrey has worked with intentional brands such as the Estee Lauder Companies, Nivea and Vivienne Westwood, a British fashion house known for its provocatively outlandish style.

The make-up veteran thoroughly enjoyed his experience with Vivienne Westwood, where one could most certainly expect the unexpected since norms were often stretched beyond recognition to suit a look.

Reflections On The Local Scene

We were curious on what Jeffrey thought about the local makeup scene and how we measured up to the rest of the world.

According to the expert, Singaporeans and Asians in general are at an advantage due to less pronounced facial features. Once makeup artists are well trained in the Asian market, handling the hair and makeup of caucasians might seem like a breeze.

On the downside, Singaporeans tend to favour safe and natural looks, reject experimentation, and in doing so, stifle themselves in the creativity department. The conservative behaviour of Singaporeans might prove a disadvantage to makeup artists who wish to express themselves and show the extent of their artistic prowess.

Becoming a standout makeup artists transcends raw passion alone. The philosophy behind practice is perhaps as indispensable as the execution.

According to Jeffrey, one should possess the package, which includes humility and patience. Oftentimes, there will be stressful challenges on the road, such as sudden look changes and touch-ups, which require the artist to think swiftly and calmly for a resolution.

Additionally, one should have a mentor figure. Jeffrey believes that it is preferable that the ”battles” in his industry are not be fought alone.

“Start off with a mentor figure to guide you along or be an apprentice before claiming  that you are a professional makeup artist.”