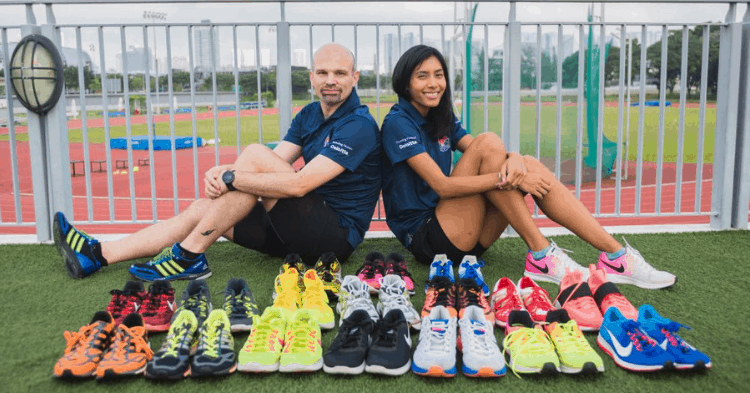 For many of us, purchasing a pair of shoes for sports is not an impossible feat.

It may burn a small hole in the pocket, especially when buying from a well established brand, but we’re usually able to afford it. After all, we get them in exchange for safety and comfort. Similarly, a lot of parents and guardians are able to provide appropriate footwear for the sporting needs of their children.

However, not everyone is able to afford items like these. They might turn to alternatives or just not engage in competitive sports as much. While using canvas school shoes as running shoes may be alright during a weekly physical education class, it’s not the best for long term active running.

Someone who understands this well is Dipna Lim-Prasad. In March 2017, the Team Singapore runner, who recently retired from competitive running, co-founded and launched the organisation, In My Shoes, a non-profit that collects sports shoes and redistributes them to those in need.

Since its inception, In My Shoes has been able to redistribute thousands of shoes through the support of multiple athletes, sports brands, companies and organisations around Singapore. They’ve even been able to provide the occasional sportswear care package for some of their recipients.

THANK YOU for your generosity! All these shoes just from today. Looking forward to seeing you all at the Singapore Kindness Run next Sunday, 14 May. 🏃🏻

Dipna’s motivations for starting In My Shoes came about when she started coaching at a girls home and noticed that many of the girls who attended training sessions wore sandals or school shoes. It was then that she realised that it was because they didn’t have any appropriate footwear.

In fact, the problem was widespread despite track and field being one of the cheaper sports to engage in. “That upset me. We always say sports is for all, and yet there was still a financial barrier that stopped our youth from being able to practice it safely,” she says.

She then donated some of her shoes. “I’m a Nike athlete. So I’m really lucky to get more shoes than I can wear,” she says. Athletes, especially ones with sponsorship, occasionally need to sport a certain pair of shoes or change shoes once they notice that they are not meeting their competition needs.

PSS: Do you need help with that? Me: Nope. Me: Actually, could you help me take a picture? 😬

“Some athletes are very particular about shoes. We can tell once the cushioning is just a little bit off and we’re going to change because we don’t want to risk any injuries.”

This meant that she was left with many unused pairs of shoes that were still in great condition and could repurpose them as training shoes for the kids she was coaching. “Obviously that’s limited to my size, so I asked fellow athletes who I knew were sponsored if they could donate their shoes.”

Mobilising Groups To Action Through A New Organisation

Only managed to clear out half our box at the SportSG Athlete Services Centre because I’m a one man show today. 😅 Thank you for your continued support and contributions! Stay tuned for the behind the scenes of another cleaning sesh happening later in the week! 🙂 #solemates

Team Singapore athletes were incredibly supportive of her efforts, with Dipna noting that a collection box at the athlete services centre at SportSG is still filled to the brim to this day. However, given that the pool of sponsored athletes in Team Singapore is limited, having multiple shoes sizes available would continue to pose a challenge.

“We realised that in order to have a broader range of shoe sizes in our inventory we would need to expand our donor pool,” she explains. This realisation would eventually lead to her officially setting up In My Shoes with co-founder James Walton of Deloitte in March 2017, and working with the public.

“We also felt that we wanted this to be a full community effort. We have a lot of active citizens who are not Team Singapore athletes but care a lot for sports too!”

The launch saw them invite 70 children from various organisations to be some of the first recipients of running shoes from In My Shoes. Together with various founding partner organisations, they were able to provide a mix of brand new shoes and incredibly well maintained second-hand shoes to each of them.

Since then, In My Shoes has worked with SportCares and other educational institutions to identify people in need and gift them with running shoes. 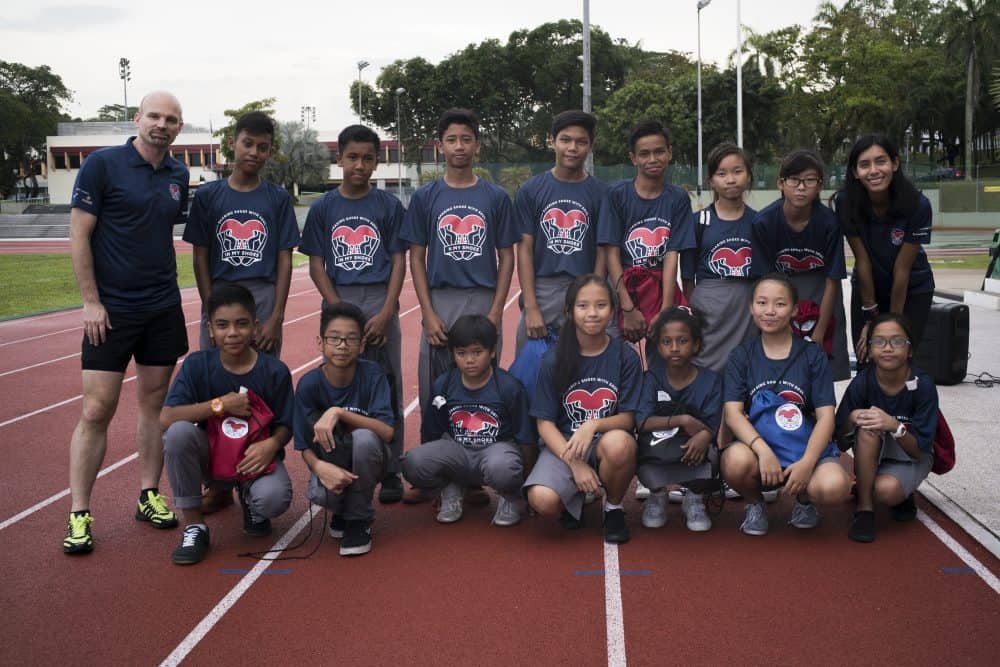 Not every shoe that is donated makes the cut though. To ensure that every recipient is given the best, certain standards and protocols are maintained.

In My Shoes is strict about quality control. In fact, the redistributed shoes are often in such good condition that you wouldn’t guess they were second hand.

Dipna proudly recalls how some of her founding partners weren’t able to differentiate between new and used shoes at their launch. “We go over to a kid and I borrow one of their shoes for a while. I flip it to the back and the white sole has just a tinge of dirt on it which meant that it was second hand, but you would not be able to tell,” she explains.

“So we are really maintaining that strict standard. There’s always no holes anywhere when we collect the shoes.”

The quality control includes filtering out non-sports shoes that are donated, shoes that are damaged, and shoes that have less than 6 to 8 months of life left in them. The filtered shoes are then hand washed thoroughly and disinfected before being distributed.

While the team receives their share of shoes that are clearly not up to mark from the public, she is quick to point out that this can be overcome through maintaining the streams of communication.

She explains, “I think there’s also a misconception. People think we can do wonders to the shoes and somehow revamp the whole thing. Or they think their shoes are in okay condition but don’t fully realise that these kids are really going to play proper sports with it and things like that.”

With any organisation, there are bound to be a few challenges along the way. However, In My Shoes was able to tap into a community and become more effective. Cleaning shoes for example, was made possible through a partnership with Dunman High and its students.

Beyond the CIP hours that they earn, students are also able to give back and help out the sports community, many of them being sports leaders themselves.

Storing shoes was made possible by the co-founders of LushProtein, a Singapore based company. Filling the gap for smaller sized shoes for growing youth is solved through their partnerships with sporting brands such as Nike and Asics.

No Monday blues over here! Thanks to @asicssg for their generosity in sharing with us their (new) sample shoes! 5 pairs have already been matched to our youths. 🙂 #solemates

The ideas of a community effort and collaborations are something she sees value in and hopes to expand on in the future.

Dreams and Looking Ahead

When asked what was her ultimate goal for In My Shoes, Dipna shares her hopes of having like-minded groups come together to provide help to individual recipients more holistically rather than setting up similar organisations and working separately.

“In an ideal situation we would be able to reach out to and help everyone within our demographic and means; collaborate and connect with other likeminded individuals so that our recipients can be supported through other means too,” she explains.

“There’s a lot of people who need help and it’s always a similar demographic. I wish we had a full database to link us up with everyone who needed help. I think too many people fall through the cracks, are too embarrassed to ask for something, or we just simply miss each other.”

Looking through a more short term lens, In My Shoes hopes to expand into other types of sport shoes next. Specifically, football boots due to the popularity of the sport. Even so, their goal remains consistent – to ensure that no child is prevented from engaging in sports because of their backgrounds.

You can learn more about In My Shoes here.