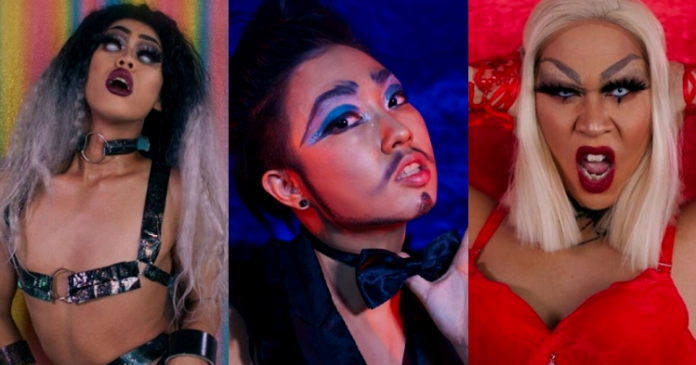 You’ve probably heard of drag queens and drag kings, but did you know that Singapore has our own community of drag performers?

We reached out to 3 of them from Queer The Year, Singapore’s first experimental queer cabaret — Femme Fatale, Aloysius D, and Fizzy Soda — to get an insight on the lesser known performance art.

Getting To Know Them

When it comes to her character, Femme Fatale (FF) is a strong independent woman who doesn’t need a man. In fact, she hates men, and would “kill all of them if she could.”

Explaining the reason behind his choice, FF shares that “a lot of this persona comes from my trauma from dating men because I’m attracted to them (unfortunately).”

On the other hand, drag king Aloysius D was first created as a rich douchebag who had just returned home after topping his class at MIT, but is now getting more in touch with his softer side and is trying to be a nice guy.

For Fizzy Soda, his drag character is heavily inspired by himself.

“My drag is very edgy and this doesn’t cater to the Singapore audience. It’s about not being appreciated enough and how people sometimes don’t understand what’s going on in my head.”

For the uninitiated who may be wondering what is a drag performer, our three performers provide their perspectives.

To FF, a drag queen is usually a male dressing up as an exaggerated form of a female for entertainment purposes. FF adds that now anyone can be a drag queen, whatever your gender and sexual orientation may be.

Aloysius D (AD) shares that a drag king is a performance artist of any gender (often but not always female) who wears masculine clothing, hair and makeup and adopts exaggerated an masculine demeanour/movements/dance moves in their performance to play as their own male persona/character onstage.

Fizzy Soda (FS) feels that “a drag queen can be literally anything. You can put just a wig, lashes and heels, and you can be a drag queen.”

You may then be wondering — how’s it different from being transgender?

FF provides a clearer idea: “A drag queen/king isn’t a gender identity. Not all drag performers identify themselves as the opposite sex like transgender people do. We simply like to dress up like the opposite sex for a few hours and do silly things on stage.”

AD shares the same thoughts, adding that being transgender is not an art form, but being a gender which is different from the gender assigned to you by a doctor/parents at birth.

“Many drag artists are not transgender and see their drag personas as characters they play on stage or in clubs and still identify with the gender they were assigned to at birth when they are out of drag. Having said this, there are also many drag kings and queens who also happen to be transgender and many great drag artists throughout history have also been transgender people.”

Candidly, FF shares that it happened because he was bored. Having done theatrical performances for about 8 years before NS, he found himself unable to commit to anything related to theatre due to time constraints in NS and needed a creative outlet. He then turned to drag as he found Rupaul’s Drag Race interesting.

This was some time in 2017, where his friend tried doing drag makeup on him as she was learning makeup from Cosmoprof Academy.

“Then slowly my ex taught me makeup; I kept going out in drag and finally joined a drag competition in Singapore and won. That’s how I got my foot in the scene.”

AD had always been fascinated by and attracted to masculinity in people of all genders.

“I first saw a very sexy drag king at a lesbian party in 2008 lip syncing as a modern day version of Elvis Presley and knew that was what I wanted to do one day. I love how many of history’s male pop culture heroes are. I like the idea of parodying male stereotypes and playing with how people expect men to act.”

The very first time AD got onstage as a drag king was in 2012. She was acting as a hipster poet called Post-Ironic Phil in a fedora hat and velvet jacket and read some bad poetry.

Her first “proper” performance as a drag king was when she was a part of a burlesque group called Skin in Sin and did a burlesque number to the famous Dick Lee song, Home.

FS’ story is a little more personal — he never expected to continue pursuing a drag queen career after his first performance on 18 June 2018, but the attention he was getting from people led him to continue his journey. For FS, drag has also helped him to become a more confident person out of drag.

How Has Drag Changed You?

Their drag journey has also seeped into their personal lives.

For FF, his sleeping schedule takes a hit, along with spending quite a lot on drag to build up his wardrobe this his room now “looks like a storage unit.”

“But other than that, my life is still the same. My friends still treat me the same.”

AD’s perspectives on makeup has changed since she started doing drag.

She used to think it was a tool to keep women down and make them insecure about their looks, admitting that she used to judge women who wore lots of makeup.

She first went to a Sephora on her own in 2016 at the age of 29 to get a contour kit to do drag king makeup.

“The more I experimented with drag makeup the more my world opened up and I realised that makeup is really difficult to master and is a truly an art form and a craft like any other. When I see people with makeup on around me now, I admire them for their artistry, skill and talent, and the sheer amount of time and effort they have spent in perfecting something.”

“It’s a small weird thing but there is something nice about being complimented on your makeup, and being able to compliment other people on their makeup, even if you are just strangers passing one another in a toilet queue and seeing their faces light up.”

For FS, he feels that he became more confident and approachable to people, being able to talk to people more easily compared to then.

“And also I like how I feel very confident when I can strut openly in public.”

Not A Bed Of Roses

Doing drag also comes with its own set of challenges.

For FF it would be removing body hair as he want to be as feminine as he can when he does drag. Learning how to walk, balance and dance in heels was also a big challenge for him.

AD faces the challenge of having a lack of awareness about drag kings. As such, she feels that she needs to work even harder to prove that she can be just as entertaining as drag queens.

“My other challenge is that I am not very good at dancing or memorising dance moves so I need to either work on improving that or come up with more ways to distract people from this fact.”

For FS, his challenge is a rather personal one — hiding the fact that he’s a drag queen from his strict and religious parents.

When it comes to becoming a progressive society, it’s undeniable that we are lacking in more ways than one. The three drag performers share their views on how they feel Singapore can be a more drag-accepting society.

FS acknowledges that the older generation may have their own difficulties in accepting drag, but is more optimistic about the future.

“If we’re talking about the youngsters and young adults, i think they are very much accepting of us.”

FF says: “The government first needs to remove censorship on LGBT material first so that Singapore can be more exposed to LGBT art like drag. I think it’ll be cool if more venues hired drag queens as entertainers and with that it will expose more people to the art of drag and get an understanding of what drag is all about. But of course I do hope those venues and organisers pay Drag Performers well. Makeup, costumes and cab fare aren’t cheap!”

AD agrees, adding that she thinks Singapore needs to work on being more accepting of people with all kinds of differences, including LGBTQ people, especially gender non-conforming people and transgender people.

“Singapore also needs to work on being a less misogynistic society which values the safety of women in public spaces.”

To find out more about Queer The Year, you can head to their Instagram page.