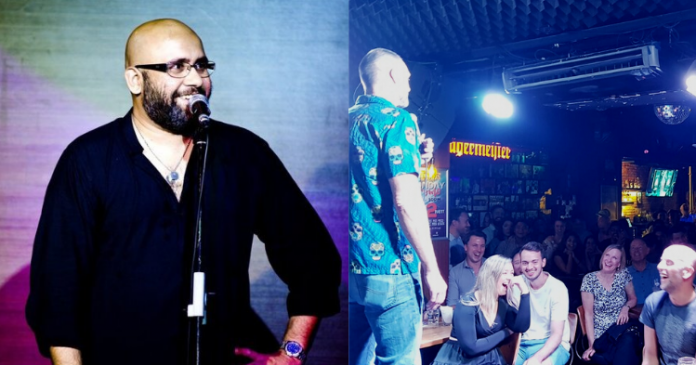 Laughter is the best medicine – cliché yes, but still true as ever.

Comedians are intimately-acquainted with the power of laughter and are some of the most inspirational people.

Think of it this way: comedians filter out the funniest parts in life and share them with their audience. They make us feel better about life and ourselves when reality seems harsh.

It is comforting to know that if we were to strip away all the labels and differences among us, we’re all fellow humans who can come together to appreciate some quality humour.

We had the wonderful opportunity to interview funny man, Umar Rana, who founded Comedy Masala, a popular stand up comedy haunt in Clarke Quay. He enlightened us on his craft and shared some of his astute observations since Masala opened its doors back in 2010.

Umar is a natural showman and always loved the stage.

He shared, “as a child I was always up to something or the other, and loved entertaining people, whether it be wearing my mom’s heels and dancing for family members or just doing funny stuff in front of people!”

Perhaps, one defining quality that any budding comedian should possess is the ability to laugh at himself.

Uma added, “I’ve always been loud and loved seeking attention. I was never afraid of public speaking or just making a fool of myself in public.”

Umar has stayed true to his spontaneous personality. He opens each Comedy Masala session with his trademark baritone voice, addressing the audience and teasing some of them as part of his routine.

Umar sounds like the friendly bartender who everyone wants to befriend. He is also armed to the teeth with acerbic wit and an arsenal of jokes.

Comedy Masala began in 2010, when Singapore’s comedy scene was still in its infancy. The audience was less receptive towards the stand up art form.

Umar recounted some resistance received from the earlier days.

“ ‘Dying’ on stage is something that’s part and parcel of this industry. No matter what, a comedian will struggle on stage. In the earlier days of Comedy Masala, about 7 or 8 years ago, there were times when the audience started hooting/booing during some performances. It was horrible to watch that.”

Yet, the comedian soldiered on, staying true to himself and his art. To date, Umar has had over 600 shows (and counting).

Comedy Masala International was launched in 2017 during a visit to Pakistan.

Comedy Masala was named from its open mic days, back when aspiring global performers with diverse backgrounds would showcase their skills on stage. Masala means a blend of different spices and flavors in Hindi. It was aptly chosen as an allusion to its eclectic comedians.

Umar believes that the best performers are the inclusive ones who connect with any audience, regardless of where they’re performing.

“A good comedian will get laughs in any country that he/she performs in. The best humour is the global kind – which means jokes that transcend boundaries and culture. Good comedians will also study the city they’re performing in and will typically note down some good local references, which always goes down well with the audience.”

Think you’re funny and wish to express yourself on the Masala stage?

Umar shared that he extends special invites to comedians with stage experience and who can hold their own.

“I obviously keep a very close eye on the local comedy scene, and whenever someone starts getting more recommendations and mentions, I’ll just approach them directly and ask them if they’d like to do a spot at Comedy Masala.”

Umar revealed some of his observations on the current local comedy scene.

“I think the easiest jokes here, which everyone can relate to, are the nuances and stereotypes of the different races and of course the differences between locals & expats.”

There is one pet peeve that crawls under the skin of the comedic genius.

He states, “I’m not a big fan of the overly political correctness that’s taking over. There are some topics which are just funny and meant for jokes and to make people laugh. Trying to find something negative in topics really restricts the freedom of comedians to be able to just crack some jokes which are generally not offensive at all!”

A Bright Future for Masala

Umar plans to expand the Comedy Masala brand to include Wednesday night specials with selected comedians. Comedy Masala may also be coming your way in smaller theatre-style shows in 2020.