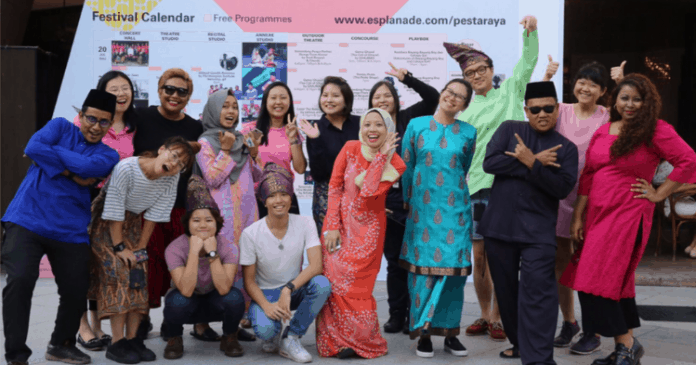 In our new series, Working In The Shadows, we peel back the curtains and put a spotlight on the people who play these unseen but important roles in the arts.

Today we take a further look at what Hanie Nadia Hamzah, a programmer at Esplanade – Theatres on the Bay, does.

The Esplanade is teeming with activity. On any given day, you’ll find performances, workshops, exhibitions and tours at its centre. The artists who perform in these spaces present a diverse array of artistic practices and genres.

Keeping up this level of programming takes effort, and that’s where programmers come in. At the Esplanade, they not only work with artists and groups to curate programmes for the public – they also work with aspiring artists in their development.

Hanie is one such programmer. She spent 14 years in the broadcasting industry working on televisions shows and media projects before making the switch.

“I felt that I had covered what I wanted to achieve in the entertainment side, so it was more about what else could I do with my experience and skillset,” Hanie explains. As someone who was interested in the arts, going into arts programming felt like a natural next step.

It has been five years since she joined the Esplanade but her early years took some adjustment. Coming from a small production house that required independent work, Hanie’s first days in a large organisation were a bit of a culture shock.

“To learn to let go and understand that there are other people to help was a learning point for me,” she explains.

What Does a Programmer Do?

As a programmer, her job is to ensure that the Esplanade offers a wide variety of programmes throughout the year. She works with other programmers to curate these programmes and take turns to present shows at the concourse and outdoor stages.

“For me I like soul and R&B so one of the programmes I work on is the free programme series, Soul Jam” she says.

These free performances give audience something they can enjoy and appreciate. “We programme things that are for everybody, so understanding your audience is very important. We then find the right performances to suit them,” she elaborates.

This process of finding artists for performances is an interesting one, with aspiring artists coming in from different avenues. Social media has also become an important platform to gauge the tastes of their audience. “You can see what people share and what they like,” she explains. She then attends these events and discovers something new for the centre.

Programmers often work with aspiring artists and offer opportunities for them to grow and develop. On a larger scale, programmers also travel to other countries to look out for potential collaborators who can present at the Esplanade.

This also fosters relationships with other performing arts centres around the region, potentially opening up opportunities for Singapore artists to perform in those spaces.

Hanie is also the programmer for the Esplande’s annual Pesta Raya – Malay Festival of Arts. With preparations for it in full swing, she’s busy overseeing rehearsals, monitoring ticket sales, and ensuring that everything is moving along smoothly – on top of her daily duties.

The programmer’s role in an arts centre is to provide audience with things they enjoy, yet also challenge their tastes and appetite through shows that they may not always watch.

This also holds true for many of the artists they work with.

They often work towards larger goals with the aspiring artists, and many go on to have their own ticketed performances at the Esplanade.

“It’s actually developing the skills and the abilities of the artists to reach that particular platform eventually,” she explains. “There are artists who want to achieve a lot more. So for my part, I identify these artists and then work with them to help them achieve that particular ambition. And if it’s possible, even take them beyond the shores of Singapore.”

Some examples of artists like this who have come through Esplanade’s door include NADI Singapura, Sufi Rashid and Joanna Dong.

Finding a balance between the artists and audience can be a challenge. It takes a lot of communication on the part of the programmer to balance things out. If there is an issue, Hanie has the task of flagging it to the artists, providing her own solutions without taking away the artist voice.

Hanie believes that the mindsets are changing about arts related careers in Singapore.

“I think parents today are a little bit more understanding and encouraging when their children want to go to an arts school now,” she elaborates. Many of her friends even encourage their children to develop their own skillset.

However, some misconceptions remain. She recounts conversations she’s had where taxi drivers would tell her that one has to be formally dressed to enter a space like the Esplanade.

“It’s something that, as an arts centre, we have to try and let people know that that’s not true. Art is accessible. It is for everyone,” she says.

People are sometimes stumped by the building itself and automatically assume that they have to pay to enjoy the art and might not be able to afford it. “It’s one of the reasons why we have all these free programmes. It’s also encourage people and show that there’s not just the ticketed programmes. There’s a lot of free events,” she says.

Working in the Arts

Working in the arts has allowed her to see that the people who are in it are incredibly passionate.

Yet, it is also not as glamorous as it is portrayed. It takes a lot of work and sacrifice. As Hanie puts it, “you must really love it to actually be able to do it.”

So what has Hanie learnt from her five years in the arts?

“The most important lesson is that you’re not doing it for yourself. Whatever you do will impact society or the community,” she explains.

She always works with that in mind and reminds herself that her work will always have an impact on someone else.

Pesta Raya – Malay Festival of Arts happens from 27 to 30 June at the Esplanade. You can find more details here.