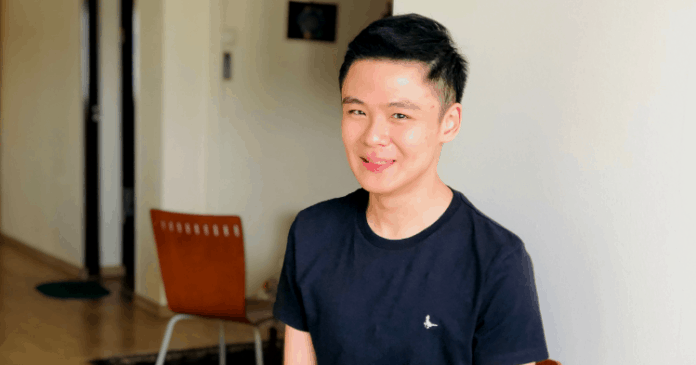 Professional success and personal solace don’t come easy these days – what with the cutthroat competition and ever-growing rat race. Imagine achieving all this when you have a rare neurological disorder called Tourette’s Syndrome.

Hao Feng graduated with a Bachelors degree in Computer Engineering from National University Singapore in the year 2014. Currently, he works as a Solutions Architect.

Before this, he was working as a Microservices Engineer at DBS. At that time, he and my husband were colleagues and I met Hao Feng for the first time at a 7-11.

My husband always spoke very highly of Hao Feng – about what a great man he was, how amazing he was at work and how he had a witty sense of humour.

When I met Hao Feng I could see those traits that my husband spoke of. His personality shone beyond the frequent vocal and motor tics. I knew there was something special about him, something more than what we could see.

How do you ask someone if they are willing to talk about a sensitive medical condition that they have? What is their story? Would they be comfortable in sharing their story with the whole world?

These are some of the million questions that came to my mind when I decided to interview Hao Feng. To be honest, my initial intention was to stray away from the topic of Tourette’s, focusing on education and job-finding instead.

To my pleasant surprise, Hao Feng not only said yes to the interview but he proposed that we talk about Tourette’s Syndrome. 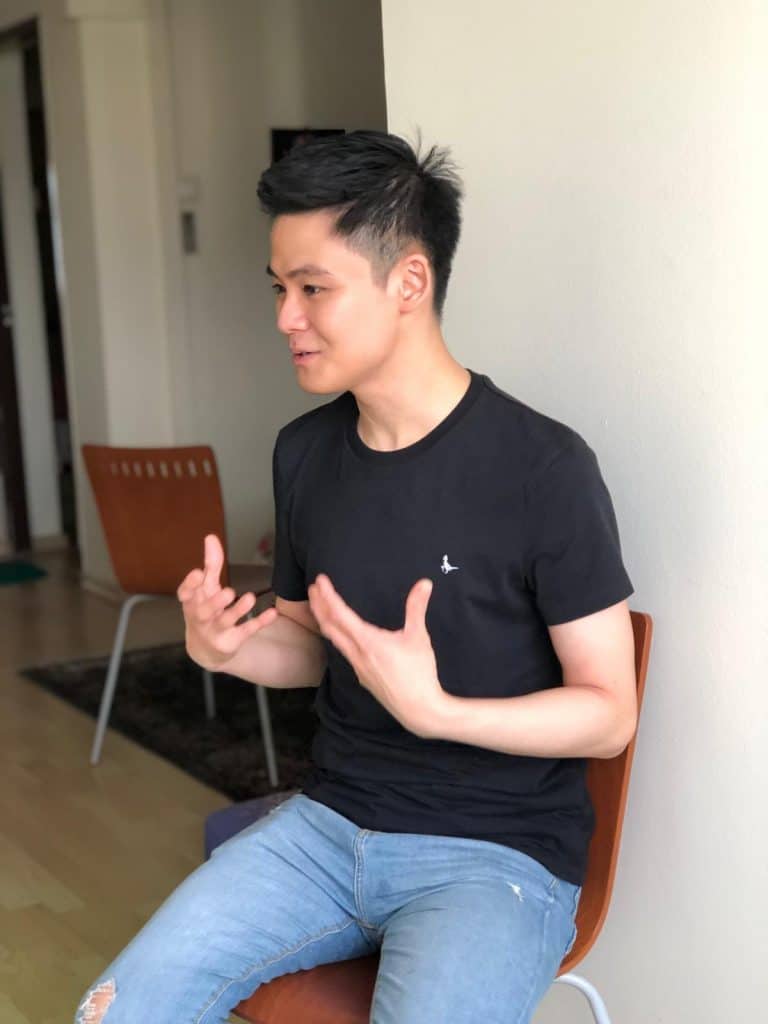 “There is very little conversation about this disease in our country and if I can help create some awareness, I would really like to talk about it”, he said.

I was moved and inspired by Hao Feng’s courage and will to open up. I believe that while talking about inclusivity and mental health generally is great, stories like Hao Feng’s coming out in the mainstream is even more significant.

The more we talk about an issue, the less of a stigma or taboo it becomes.

In fact, Hao Feng shared that it sometimes gets weird when people around don’t understand what is going on due to a lack of awareness.

To address this issue and share some insight into what Tourette’s is all about, Hao Feng made a card that he hands out to people so they can learn about his condition and understand what’s going on. 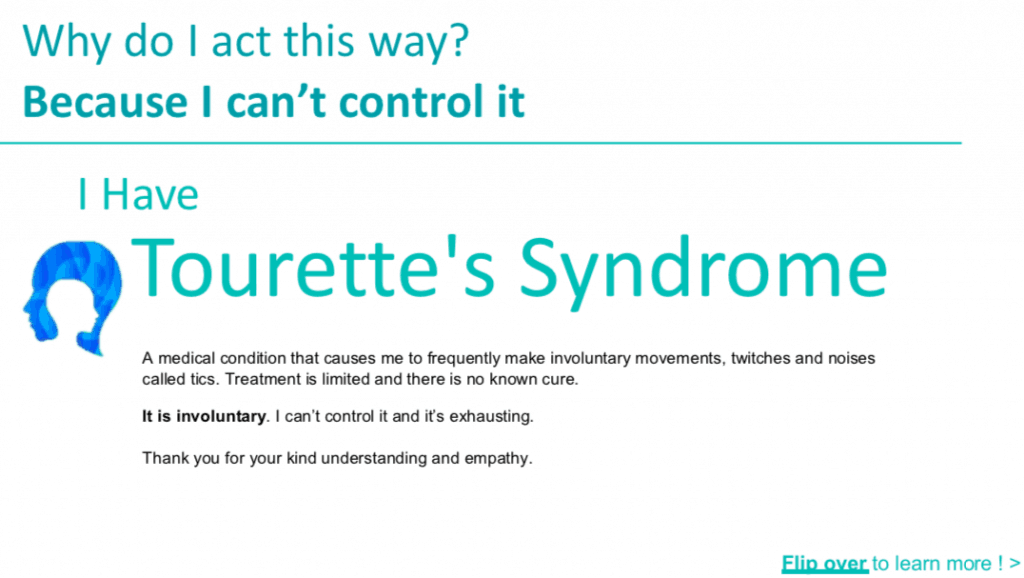 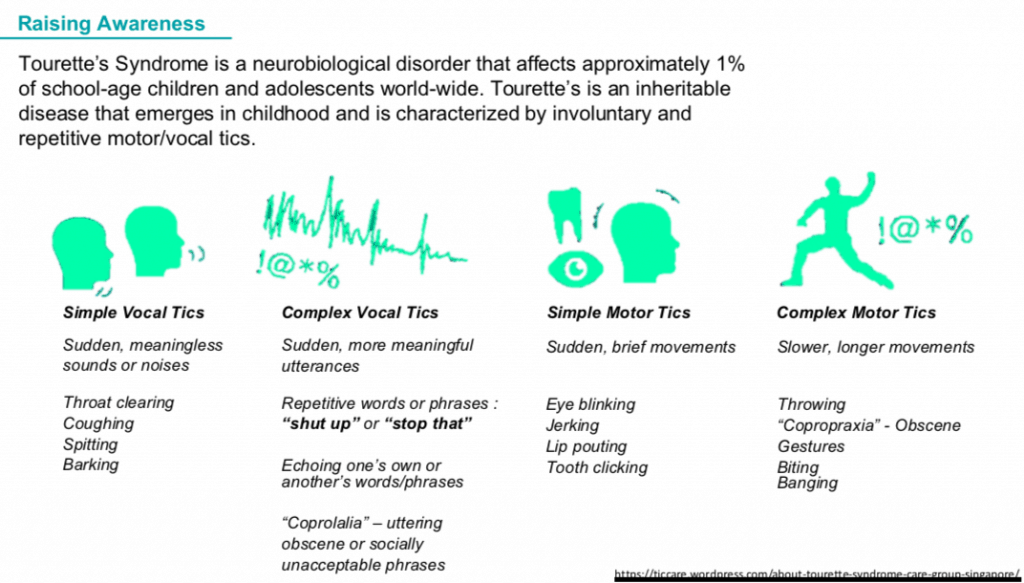 Growing up with Tourette’s Syndrome

Hao Feng was an introvert kid and being diagnosed with a condition that affected his vocal skills didn’t help much.

He was only in primary school when the symptoms first started showing. Neither Hao Feng nor his family understood what was going on. In fact, people thought that he was going through some sort of rebellious phase and was “acting out” due to familial issues.

One day things got extremely uncomfortable. “I remember my mom was late from work and she didn’t tell my helper that she would be late. I had a slight fever and my neck kept twitching.”

Gradually, Hao Feng started having other symptoms like knee jerks and shuddering. At the age of 8 or 9, Hao Feng was medically diagnosed with Tourette’s Syndrome.

Growing up is hard, adulting is harder but imagine all that with an added neurological disorder, which is characterized by repetitive, involuntary movements and vocalizations.

“I was bullied and I felt so helpless so many times.”

“I did not have many friends and as I grew older, Tourette’s grew with me. People started leaving. I could not express myself clearly and it was frustrating,” Hao Feng shares.

“I was awkward and scared. It was horrifying,” he adds. As I listen to Hao Feng’s story, I am in awe of his courage and tenacity.

He had no safety blanket while growing up. “My childhood was pretty dark – even my father was not around during my teen years and I was mostly by myself,” he shares.

One thing that Hao Feng secretly takes pride is in the fact that although he was seated separately, he never asked for extra time in any examination.

“While writing exams when I got nervous, which any normal kid can get, my paper would sometimes get torn due to the aggravated motor tics. I remember once the entire second half of my paper was torn.”

This is just one example of an everyday struggle of someone suffering from Tourette’s Syndrome. Owing to the lack of an emotional support system and these everyday issues along with bullying, Hao Feng slipped was constantly sad and agitated. 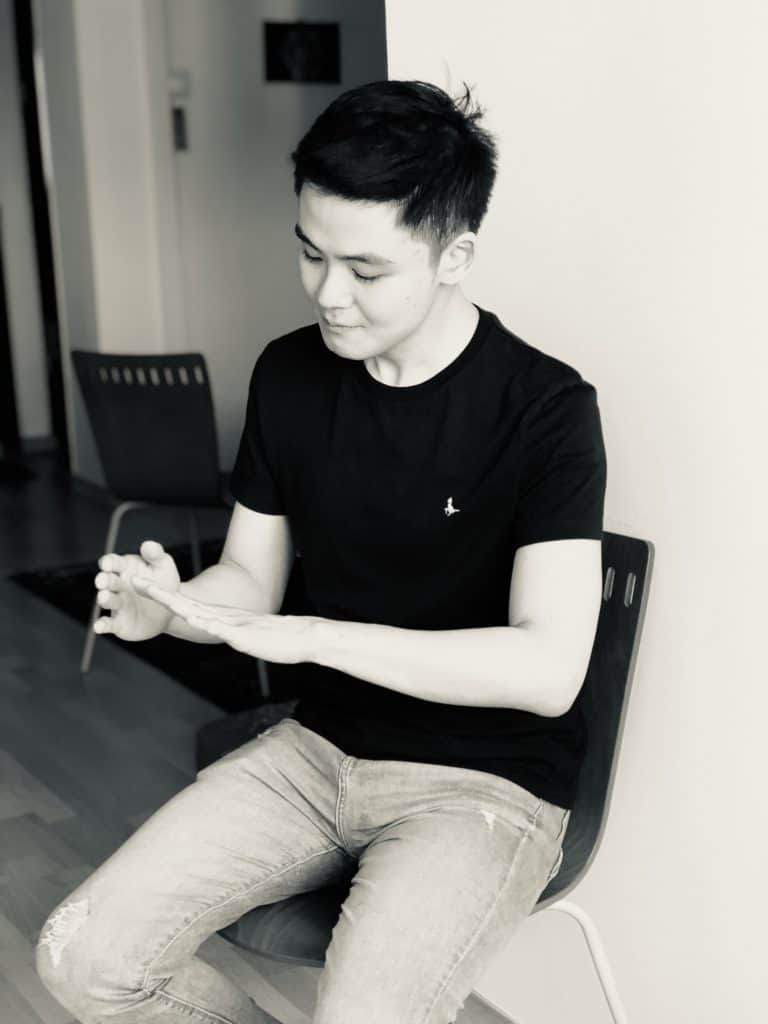 He also developed a habit of pushing people away because of his experiences.

“I started making excuses to bail out of parties and get-togethers. I went to the extreme extents of lying around to push people away. I would even say things like ‘Oh! I am married’ or ‘I am going out’ so people won’t bother me.”

However, Hao Feng realized soon that he needed help. He started going for counselling and taught himself how to trust people without the fear of being judged or abandoned.

At that time, Hao Feng tried to find support groups or communities for Tourette’s patients but failed. 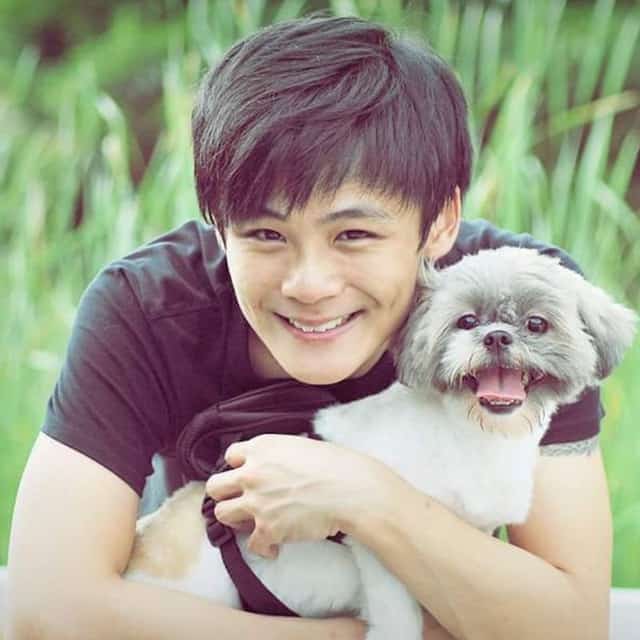 “I feel like the support could be much better. There is a lack of community in Singapore for Tourette’s patients. Even after the medicines, a patient needs therapy and underlying support.”

“The thing is – people give more priority to fatal diseases or issues that are trending but what about the rest of us?” Hao Feng raises an important question.

Finding love in the women of his life

One of Hao Feng’s biggest strength and inspiration growing up has been his mother Mrs Soh-Tan Bee Eng.

In addition to being a homemaker, she has served for almost fifty years in various government departments in the Ministry of Community Development, Youth and Sports.

She has worked tirelessly towards turning the lives of many, returning destitute persons to their families and communities. While at home, she had to live with the bare minimum, struggle over her husband’s financial woes, and suffer familial challenges.

“Despite all odds being against us, my mom put my sisters and myself through medical school, Columbia and NUS. She is the strongest woman in my life who inspires me to keep going,” Hao Feng shares.

Another woman that inspires Hao Feng, bringing a smile to his face is his girlfriend Jen. “Though Jen is younger than me, she still inspires me. She has shown me that I am loved and we have been together for over a year now. She taught me to trust again,” he smiles looking at her. 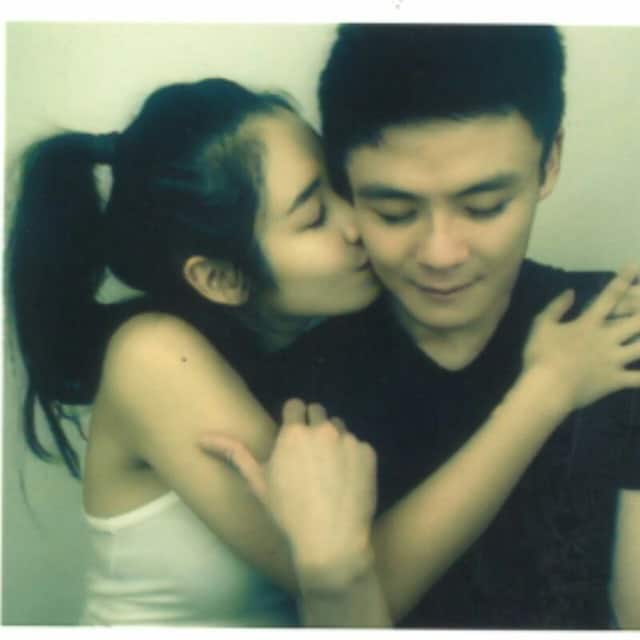 Message to a younger self

The first thing Hao Feng did when he started making money was to get himself contact lenses and focus on his mental health. He also started working out so he could fight back against physical abuse.

Eventually, he started believing in himself and in the people around him who were there for him. The only message he would like to give his younger self and to all others out there who feel excluded is that “you are not alone”.

“The world doesn’t have to be a dark place. It can be beautiful for you too. Just don’t give up and keep trying. Seek help.”

As we spoke, cried, and laughed, I’m thankful to Hao Feng for opening up and coming forward with his story, as I am to Jen for being the silent yet strong pillar beside him during our interview.

Needless to say, this interview will always remain close to my heart.