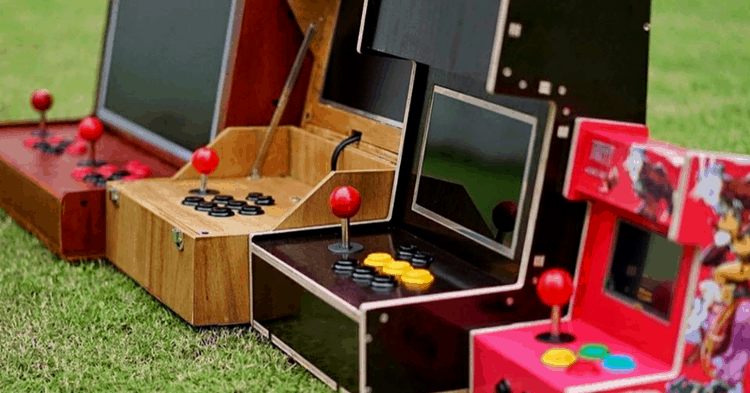 Technology has made spectacular leaps forward for the gaming experience. A couple of months ago, my brother got his hands on Legend of Zelda: Breath of the Wild and raved about its intricate, dreamy landscapes and how Link can interact with just about everything.

Many like him eagerly await new immersive experiences on the latest consoles. However, some hold a special place in their hearts for the simple classics they grew up playing with.

If you’re a believer that ‘old is gold’, KJ’s homemade arcade machines are bound to make you feel 8-bits of nostalgia.

Meeting The Man And His Machines

I visited KJ’s office to learn about his unique hobby, RetroCade. As he led me courteously upstairs into a second-floor HDB unit, he told me his full-time business was multimedia and game design. Inside, game posters and character studies hung on every wall and door.

KJ says working on RetroCade depends on his free time. Even so, completed machines and parts waiting to be put together share residence with his workspace daily.

He built his first machine about two years ago – it was a personal project he wanted to try when he’d heard that a Raspberry Pi could run it.

“I wasn’t actively trying to sell them,” he says, “But when you start showing off on Facebook, friends say it’s cool and that they would buy it.”

I’m curious how many he has built so far, and he has to consider this awhile before saying, “about 50?”

KJ brings out a book in which he has compiled RetroCade’s best pictures. As we flip through, I see that he’s been exploring with a range of shapes and sizes.

Many machines look inventive and beautifully finished, but not every piece was a success at the start. It took a number of prototypes before the maker was satisfied.

With early attempts, he encountered difficulties learning where to buy parts and how to repair them after they were fixed into place. He also had to learn how to install operating systems and of course, the games.

“I didn’t know how to do the wiring, so I bought a controller and took it apart. That made my first machine really expensive.”

Then, KJ recalled the moment when things started to add up.

“By the third or fourth prototype, I started to get things right.”

He found a solution by cutting holes and notches into panels that help them fit together, so he no longer needed to measure as he built.

With a touch of bashful humility, KJ tells me he wouldn’t say his current kits are perfected, but that the process is more streamlined to make building quicker.

I was impressed to find out he can build a machine in two hours. However, each time he develops a new design it takes two to three weeks of his time in between working.

With all the dedication put into his creations, I was sure there must be a few he’s exceptionally fond of. While he likes them all, KJ gives special mention to three unique designs.

The first is a sleek cabinet that lays flat on the table. I see the attention to comfort as the screen is tilted at the perfect angle for our eyes. The glossy shine of its rich rosy wood shows off a labour of love.

The second is a dual-screen machine. KJ says this one is unusual because players sit opposite each other instead of side by side, making it great for a head to head battle between friends.

KJ leads the way into another room to show me the third piece. “This one is purely my own design,” he says.

A blockish wooden briefcase sits on the table — handle, latches, and all. You probably wouldn’t think it was something to play with.

He flips open the latches and boots the machine up. Soon, I’m looking at all the versions of Street Fighter (which by now I’ve learnt is his favourite childhood game) on the menu screen.

As he asks which games I would like to see, I consider my embarrassingly limited video game knowledge and decide against saying “I like Pac-man!”

In these two years, KJ hasn’t kept this hobby all to himself. He enjoys meeting new people and sharing the fun and nostalgia with them.

“For some time we toyed with the idea of doing workshops, but space was always an issue,” he tells me. By a stroke of luck and great timing, opportunities came his way.

“Chye Seng Huat Hardware had bought some of our machines before. Then they noticed we make DIY kits and asked if we would like to do a workshop there.”

The second workshop was held this February at Funan Showsuite, which had similarly noticed RetroCade at CSHH and got in touch.

KJ has even taken arcade machines across the world to conventions in Germany and Japan.

“When I bring them overseas, I can just take them apart, flat pack them, and assemble again there,” he says.

Everyone Is A Builder

As mentioned earlier, KJ can manage an incredible feat of building an arcade machine in two hours. This made me wonder if it was tough for others to keep up.

He tells me the machines they built at workshops were not too challenging as they were small single player pieces.

“By the second workshop I factored in two to three hours, and most of them were able to finish it by three and a half.”

He also says he receives a wider audience of workshop-goers compared to buyers. Buyers are typically people around 30 to 40 who grew up loving retro games.

“At a workshop, someone asked if the controller stick should go on the right side for right-handers, so I could tell he didn’t play a lot of games”, KJ says.

“That was the moment I knew the workshops attract not only gamers, but people who are looking for new experiences too.”

Some attendees have even brought their kids along and made it a bonding session.

KJ remembers a particular mother and son duo. They made an impression in his heart as the boy left saying, “This is the best day of my life!”

Although kids now are most familiar with iPads and 3DS, they had no problem connecting with the arcade machines. After all, games are games.

For adults, though, the nostalgia is sweet. In comparing new and old, KJ cheers for simplicity and timelessness.

“Retro games are much easier to get into,” he says. “You can just turn it on and play for ten minutes, whereas when you play on a PS4 you will tell everyone not to disturb you for the next two hours.”

Speaking of ten-minute games, he mentions that mobile games just aren’t as fun. I suggest another advantage is that arcade games never bother you with ads, and he chuckles in agreement.

He also thinks nothing beats interaction between friends playing side by side, helping and shouting at each other.

As our chat is coming to an end, I ask if he has considered making RetroCade a full-time business, but KJ says he’ll stick to doing it just for fun.

“Perhaps in the future, the parts will get harder to find or become more expensive, and I don’t know if I’ll be able to sustain this.”

While the computer components are the most costly parts, KJ considers his time to be the most expensive investment. However, at the end of the day, he’s glad to see people get excited and enjoy the fun of building machines together.

Get a taste of nostalgia in his mini arcade creations here.