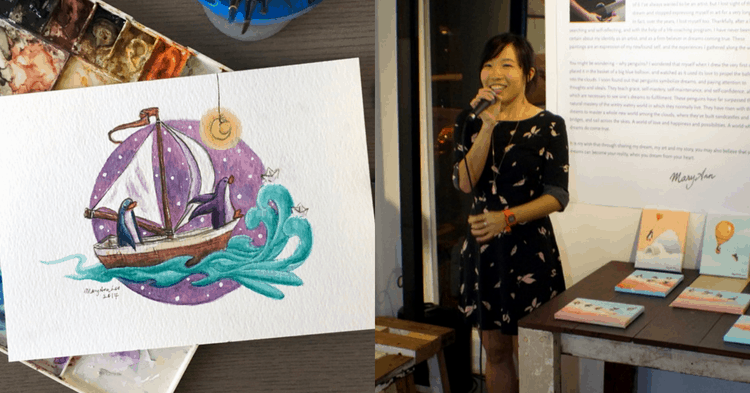 As a young child, MaryAnn Loo loved drawing and wanted to be an artist, but was discouraged from doing so. With time, she forgot about her dream and stopped drawing for two decades, apart from mandatory art lessons in school, and doodling in her textbooks when she was bored in class.

At the age of 28, in her final semester of her Bachelor of Arts in Songwriting and Music Business, she enrolled in an “Introduction to Drawing” class.

Eventually, she made “a very unproductive attempt” – a year spent trying to become an artist in New York City.  Although she felt that art was her “true passion and (her) direction in life,” she was also worried that this attempt at pursuing art might not pan out well, and regretted not having gone to art school.

Holding A Solo Exhibition With No Prior Experience

Upon returning to Singapore, MaryAnn enrolled in a life-coaching programme. With her life coach, she embarked on a 5-week project – to organize her first solo exhibition. This included painting 30 new paintings and raising $2,000 USD for the exhibition costs. All this was done without any formal training in art, nor prior experience in events management.

“It was one of the most difficult things I’ve ever done, but I learnt a lot from the process, and it has pretty much defined what my art and my life has been about – love, joy, and the adventure of living out your dreams.”

From this encounter, MaryAnn received many opportunities – including media interviews, and a request to illustrate a series of three books.

“All of a sudden, my dream was becoming real – it was so unreal because just less than two months earlier, I had thought it was totally impossible.”

On the opening day of MaryAnn’s exhibition, she “was amazed to see more than 80 people attend and engage with the paintings.” During the week-long exhibition, MaryAnn sold 17 paintings, earning about $6,000 SGD.

Afterwards, those who had been inspired by Maryann’s story – ranging from strangers to her own friends – reached out to her.

One of them quit his job in architecture to pursue his dream of being an artist; another formed a band, and started writing, recording and performing songs.

On reflection, MaryAnn muses, “I never expected that my project of making my dream come true could inspire others to also make their dreams come true.”

For this reason, MaryAnn also considers her first solo exhibition as one of the achievements she is proud of in her artist career – since she had initially believed it was too late but made this “impossible” dream happen in two months.

“I had the support from a life coach (and) from friends and family, but ultimately, I was the person who spearheaded my project and made the solo exhibition happen,” she explains.

How did MaryAnn become the PenguinGirl?

She shares that the penguins “appeared” during the creative process when she was painting, and “haven’t left since.”

When MaryAnn painted for her first solo exhibition, she set her paintings in the sky and in a land of clouds. To her, the character that lived in the clouds would have had to be one that was unable to fly.

Though MaryAnn is unfamiliar with general knowledge about penguins, she chose the penguin as the basis of her art because of the symbolism of the penguin animal totem, which has parallels to her stories about chasing her dreams, and living the life she’s always dreamt of.

Shortly after her first solo, she was doodling in her sketchbook when she started drawing a girl with penguins – MaryAnn considers this PenguinGirl’s first “appearance”.

PenguinGirl represents MaryAnn’s artistic side – which she describes to be a dreamer yearning for adventure and for that something more in life.

A while ago, MaryAnn received her first negative comment posted in response to a blog entry. While the comment poster requested her to delete the comment after reading, on the contrary, MaryAnn decided to publish it regardless. She also replied to it and wrote her next post in relation to the comment – but why?

MaryAnn explains that she was initially affected by what the “critic” said because she does tell herself that she’s not good enough – having it come from someone else “has an initial sting because it sort of reinforces what (she) already believe(s) about (her)self.”

“(We’re also) surrounded by other artists who are way more talented (and) popular, so it’s easy to question our own validity as an artist.”

Nonetheless, upon re-reading the comment, MaryAnn recognised that her critic’s comments stemmed as a reflection of himself and his own situation – which he was projecting onto her.

Having encountered this, how would she advise other creatives in the same situation?

“Don’t run away from negative comments or criticism. Read it for what it is. Deal with any emotions that come up, and acknowledge them for what they are,” she says.

Following this, MaryAnn advises the recipient of such comments to re-read the message again to see if there is any truth in what the critic is saying.

“Usually the reason we’re triggered is because there’s something in there that resonates with (our) current situation or state of mind,” she explains.

Hence, she recommends that it is important to identify the sentiment that resonates and has triggered the reaction. This will allow the recipient of the comment to differentiate between truths that are hard to hear, in contrast to the parts that are the other person’s baggage being projected through his or her comment.

“Recognize that this other person is also a human being with flaws, struggles and issues … (but) you’re no better or worse off than anyone else,” she advises.

As someone who has always been cynical that “everyone can draw”, I ask MaryAnn – who also conducts art workshops – what she thinks about the statement.

This is a sentiment she addresses at the beginning of all her workshops – she begins by asking if anyone thinks they are not creative, or that they can’t draw. Upon further probing, those who profess that they “can’t draw” often hold the sentiment in response to feedback they had received from a parent or teacher. Other times, it stems from friends who have received better grades in art examinations than they have.

To MaryAnn, her students’ experiences are “just an opinion that somebody else had” that the students have allowed to “become a defining factor of their lives.”

Hence, MaryAnn asks her students to put aside this mindset for the duration of the class, in order to be open to exploring “something more”.

MaryAnn explains that “drawing” is a technical skill – this means that like all other skills, it takes time, energy, effort, and a lot of practice to become good at it, which has nothing to do with talent.

“It is simply about knowing the right steps, having a good teacher, and practice, practice, (and more) practice!” she says.

On the other hand, MaryAnn views art expression as something anyone can do, where there is no set standard for “good” or “bad” art, and even a 3-year-old can express himself through art.

Life As An Artist

MaryAnn shares that those who are acquainted with her work almost always think of it as children’s art – though she has never created her art with those intentions in mind.

Other times, she gets unsolicited advice on how she should use her artistic skills, or get questioned about how she manages to make a living through her work.

“They give me this sad knowing look, almost like they pity me for choosing this path.”

MaryAnn appreciates the well-intentioned advice – but also explains that she chose this career path as it is her dream.

An understanding of MaryAnn’s past experiences gives clarity for her perspective: “I’ve once had jobs just to earn money to survive, but it can’t fulfill me the way being a creative does, even if it comes with financial struggles,” she explained.

What has MaryAnn planned for the near future?

With years of experience up her sleeve, she’s currently writing a book about making creative dreams come true, and is based on her own experiences. MaryAnn plans to put it up for sale online by early June 2018.

To enable herself to live out her dream of being a travelling artist, MaryAnn is keeping a lookout for artist residencies and projects abroad. For now, she also aims to create and firm up the structures that enable her to earn an income online, in order that she can travel the world as an artist.