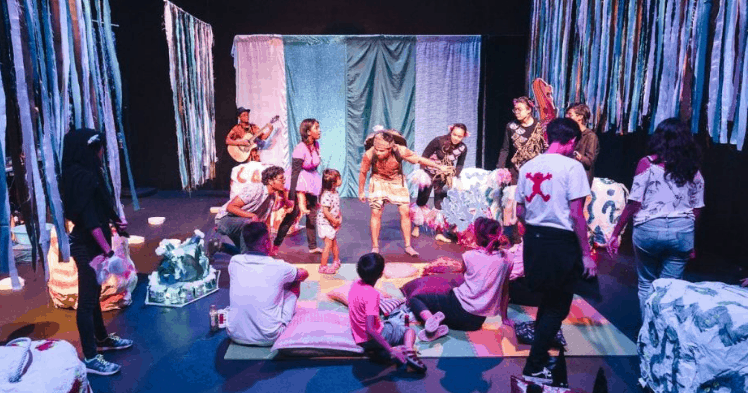 Theatre is an important art form to me. I’d jump at the chance to immerse myself in a show but little did I know that the opportunity to enjoy one doesn’t come easily for a group of children: children with autism spectrum disorders (ASD).

Children with ASD tend to their emotions differently from neurotypical children; sometimes they laugh and cry during theatre shows, and they get asked to leave. But a form of theatre on the rise, known as sensory theatre, gives these children the same chance to experience that which we can take for granted.

What Is Sensory Theatre?

To find my answer, I asked Samantha, a lecturer at Republic Polytechnic’s School of Technology For The Arts. She’s also the acting assistant programme chair for the Diploma in Arts and Theatre Management (DATM). She explained to me that sensory theatre pieces created in RP are devised and designed with a sensorial experience in mind.

Sensory theatre can be for anyone! But the shows specifically tailored for audiences with special needs look into the sensory considerations such as light, sound, touch and even smell. For example, there is no pitch darkness and startling sounds to be considerate to the sensitivities of the children.

Sensory shows are fully immersive and interactive. Audience are taken on a story told through sensory props like bubbles during an underwater scene, light water sprinkles on the audience to depict rain, and anything that the production team can conjure.

In Singapore, we do not have companies that specialise in sensory theatre.  However, there is an increasing number of theatre companies and venues that stage sensory-friendly performances.

With companies who take part in sensory theatre relatively few and far between, it’s heartening to know that final year students in Republic Polytechnic can choose to craft a sensory theatre show for children with ASD.

This year, a team of RP DATM students embarked on their final year project devising a show titled Toby’s Journey, a sensory theatre show designed for children with ASD. It follows a sea turtle who’s lost its way— a story of friendship between borders and keeping the ocean clean.

Not As Easy As You Think

Sensory theatre isn’t easy to execute because It allows audiences with diverse needs to explore the theatre space.

When you allow, say, children to utilise the whole area for their sensorial experience, concerns regarding safety arise. For example, you need to make sure they don’t run backstage or trip over curtains.

For Toby’s Journey, the actors recall how they had to stay in character while coaxing the children to stay away from the backstage area.

Samantha talked to me about the importance of having the freedom to move in and out of the theatre space. This is called a  “safe zone”, an area outside of the performance space for children should they feel overwhelmed or uncomfortable being in the venue.

There can also be a Transition Zone situated between the Safe Zone and the performance space. This is an alternative area where audiences can watch the show from, without missing out. For Toby’s Journey, the production crew place fidget toys like water beads in the Transition Zone for the children the ease up.

Sensory theatre is also a form of interactive theatre! The audience can contribute to the way the story progresses. This means extra preparation and leaving ample space for improvisation.

Experiencing the arts can be something we take for granted.

Sensory theatre gives children with ASD an equal chance for their lives to be enriched; to simply create an inclusive environment where they are able to experience theatre — to see, hear, and feel. Just like other forms of art, theatre should be accessible to everyone without leaving anyone behind.

Elspeth from RP reflected that in the process of crafting the show, she saw how “the show isn’t for us but for the children. As designers, you want to create your own show. But here, we have to put the audience members first.”

When asked about her fondest memory, she recalls a girl who would squeal and clap at anything that elated her during the show. “When I saw that, I felt like tearing up.”

It is most rewarding when the children are able to enjoy and express themselves fully in their own unique ways. Be it laughing, sprawling care-free on the floor or following the characters around, these children have an avenue of theatre where they can freely express themselves as they are.