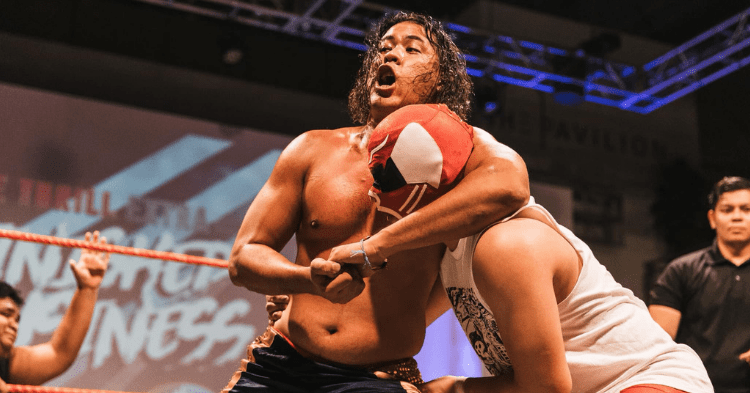 Many of us held onto great aspirations when we were impressionable children: to become astronauts, war generals or explorers in the furthest reaches of the world. Yet, for most of us, these adventurous ideas remained as childhood ambitions, as we ”grew up” to become mundane adults.

Not for Kenneth Thexeira, AKA The Eurasian Dragon, a meek optimist who also happens to be a Singaporean professional wrestler with numerous in-ring achievements.

At the age of 11, Kenneth tuned in to an episode of WWF Raw is War (formerly World Wrestling Federation) and witnessed an onscreen feud between wrestling personalities The Rock and Mankind, and decided for himself that he was destined to become a professional wrestler.

He was influenced by charismatic performer Dwayne “The Rock” Johnson, who went on to become a huge Hollywood megastar.

While it has been a common misconception by both mainstream audiences and critics alike that professional wrestling is nothing more than a fraudulent show, Kenneth strongly disagrees on the notion. He considers his profession a precision performance art, very much like theatre with action-packed manoeuvres.

The arduous preparation and training speak of nothing easy or slighting about the art.

Taking The Rock as a role model, Kenneth believes that one must stay true to himself/herself regardless of fame and to never be afraid of challenging obstacles and stereotypes thrown in their direction.

Hailing from a non-athletic background, Kenneth achieved unprecedented success as the most celebrated Southeast Asian Professional Wrestler, clinching multiple awards, honours and championships around the world.

Having enrolled in Singapore Pro Wrestling (SPW) , the first modern pro wrestling promotion in Southeast Asia, Kenneth invested his efforts towards training his star persona, in-ring abilities and ultimately building a rapport with the local audiences, which can be a taxing feat.

For the most part, Kenneth is what fans consider a baby face or good guy. This involves performers in benevolent deeds such as feuding against notorious characters, hugging babies, posing happily for crowds and clapping to stir up the fans.

The role has been well-received by the Eurasian Dragon,  who acquired the fearsome in-ring moniker through combining his ethnicity (Eurasian) and the zodiac sign of his birth year.

It is also a plus factor that Kenneth is known for his unmatched patriotism for Singapore in the roster, with him being often seen waving the national banner of white and red in his promotions,  representing the island nation where his combative journey takes him. He has gone on to become a veritable national figure within the independent scene, being touted as the ”Real Singapore Hero’.

Being a professional Wrestler tends to take one constantly on the road; they can never foresee their next fight venue. Kenneth is no exception, having traveled to Nepal, from the ancient city of Kathmandu to the remote regions of Itahari and the Pokhara Jungle.

The veteran performer has also squared off against opponents from as far as Russia to those from neighbouring countries such as the Philippines and Malaysia. Each country occupies a special place in his heart.

There are many fond travel memories for Kenneth, mostly stemming from precious time spent with his treasured companions and fellow wrestlers, most notably Wam Bam Bellows from Wrestle Rampage, a promotion in Australia.

Kenneth recounts flavourful stories like the time when both heavyweights were taking rickshaws in India and Nepal while the unfortunate pullers lugged their net weight of nearly five hundred pounds, their conversations on a 16-hour bus ride between the Indian states of Indore to Delhi, or being one with nature through taking a dip in the sea.

The Dragon stays true to his roots as a national hero.

For 2019, the seasoned traveler plans to spend more time grooming upcoming local talents and improving his standing within the home front. This idea is inline with forging a legacy through inspiring others to lace up their wrestling boots and becoming a part of the wrestling movement.

He values the opportunities offered by SPW during his earlier days and wishes to extend that privilege to future generations of performers who are tough enough to take on the challenge.

Kenneth suggests that interested parties devote themselves to their training via a wrestling school. Just like the Olympians of long-forgotten times, the students of the ”wrestling gymnasium” are provided a buffet of knowledge for grappling techniques, discipline, culture and various skills required in succeeding as a performer.

On making wrestling a vital part of the local culture, the Eurasian Dragon feels there has been only a scratch on the surface, but believes that the lofty goal can be realised in time.