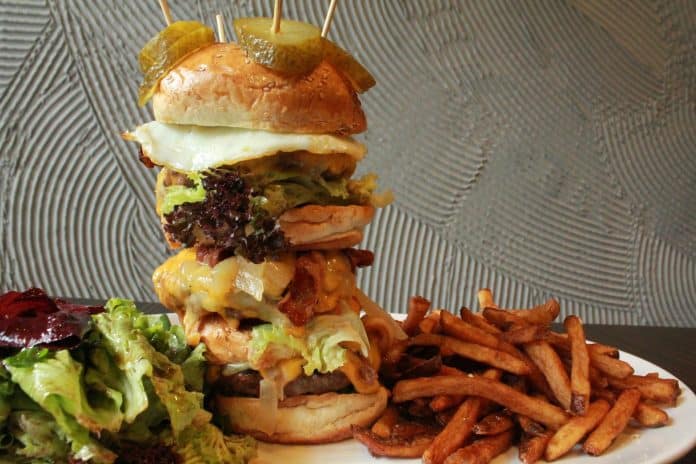 It looks much larger in real life: a towering creature— complete with three beef patties, bacon slices, a fried egg, onions, lettuce and tomato— perched atop a daunting bed of crispy fries with salad on the side.

The rules are simple. Finish it within 20 minutes and it’ll be on the house. If not? A whopping $55, plus tax and service charge, and a free dessert to torture you with mockery. 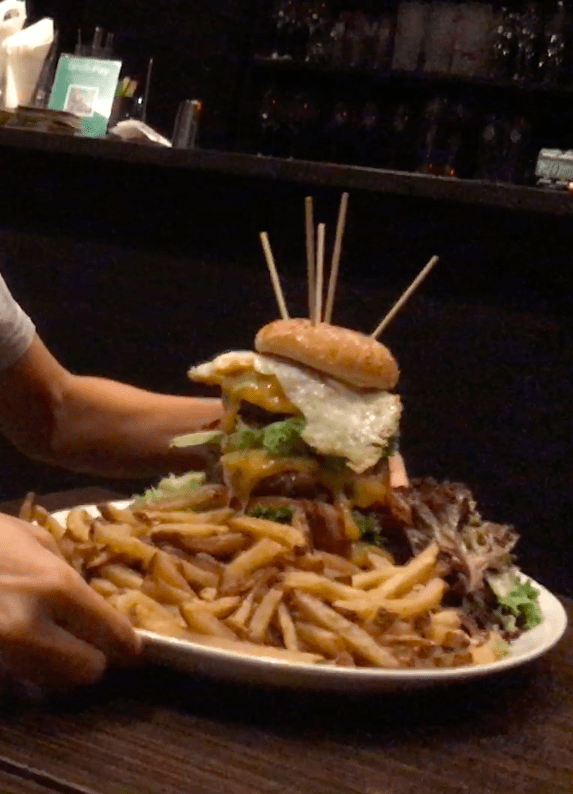 I don’t feel quite as confident now, but my two friends N and YJ has come to support me and the waitress, a no-nonsense lady, has already gotten the timer out. There is no backing down now.

“So twenty minutes, finish everything, including swallowing too,”  no-nonsense Waitress says.

The idea of a food challenge had always fascinated me. It was a rare feat that did not require any athletic skill or natural talent to accomplish, just dogged tenacity and a willingness to look like a fool— or at least, so I thought.

It was one of those things that you plan to eventually get to doing one day, except that the day is always somewhere in the vague, distant future.

But that day finally arrived as I was trying to think of a pitch for my next article. It was the perfect excuse. If anyone asked why I would voluntarily attempt to shove a gigantic burger down my throat, I could simply reply that “it’s for the readers”. 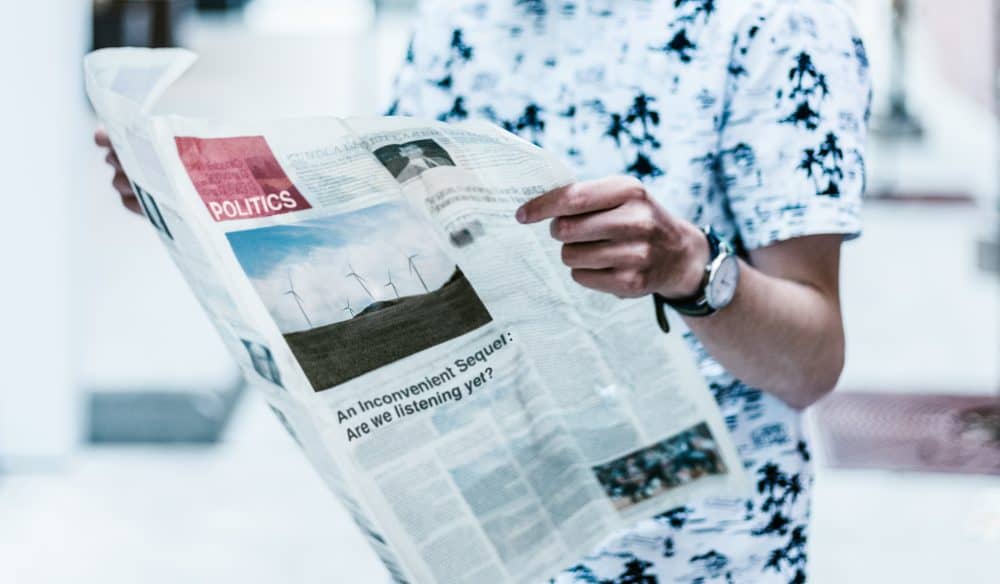 Having settled on my article’s topic, I set about to do the research. It soon became obvious that food challenges are more than a silly stunt that someone at a party pulls off to impress his friends.

According to a 2016 article on The Straits Times, competitive eating is emerging in Singapore as a sport and, true to Singaporeans’ reputation as food lovers, there is no lack of star eaters.

Take Mr Zermatt Neo for example. He made waves on social media in 2016 for devouring a plate of chicken rice weighing over three kilograms in under 30 minutes. More recently, he has taken on food discount app Eatigo’s food trail challenge, where he travelled to eight different restaurants in four hours to eat their mains.

For females, there is flight attendant Ms Sarah Ow, whose slender figure belies her stunning ability to wolf down 10 plates of nasi lemak in less than an hour.

Just a year ago, variety show Chili Hunter host Tyson Mayr required medical attention after attempting the “Spaghetti from Hell” dish from Southwest Tavern in Jurong West. He is not the sole victim.

The cowboy-themed restaurant’s infamously spicy dish has already sent eight people to the hospital. Overseas, a college student in Connecticut, USA died in a college pancake-eating contest two years ago that was held as part of a fund-raising event.

Still, I called to make a reservation for Thursday night. The venue is The Little Diner and it is called The Empire Burger Challenge. Rated two stars in difficulty on foodchallenges.com, it should be fairly safe.

In the week leading up to the challenge, I diligently trained my stomach’s capacity by eating one or two large meals daily. This involved exercising prudence in maximising the dollar in terms of cost versus volume.

When I ate out, it would be mainly porridge, followed by copious gulps of water from my bottle. At home, it was watermelon and cabbage for breakfast. It certainly wasn’t a pleasant experience shoving squishy pieces of cabbage into your mouth before morning classes! 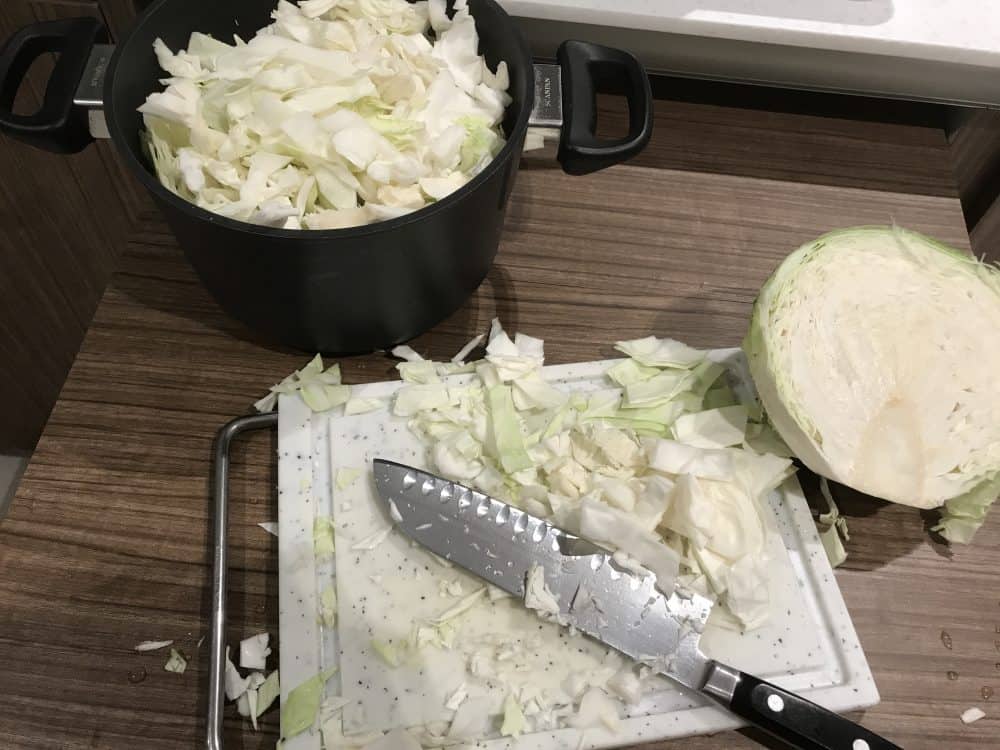 When I turn up on the day at a quarter to eight, I am not hungry despite having eaten nothing the entire day. Instead, I have butterflies in my stomach that I did not even get before my final exams last semester.

It all feels like a hazy dream; the dimly lit restaurant, the blurred voices of the weekday dinner crowd, No-nonsense Waitress placing before me a mammoth burger on its throne of fries.

And then the tiny but piercing beep of the timer.

I go straight for a beef patty and shove it into my mouth. The juice fills my mouth and I chew rapidly. Across the table, N and YJ offer their thoughts generously.

“Eat fast in the beginning and finish strong.”

The first few minutes are going well. I am on a roll, whittling down the massive burger. My friends are relentless.

“Honestly, I think that your parents will be quite proud of you.”

Around the five-minute mark, an ominous feeling of arises in my stomach. The initial burst of energy is fizzling out but I press on. 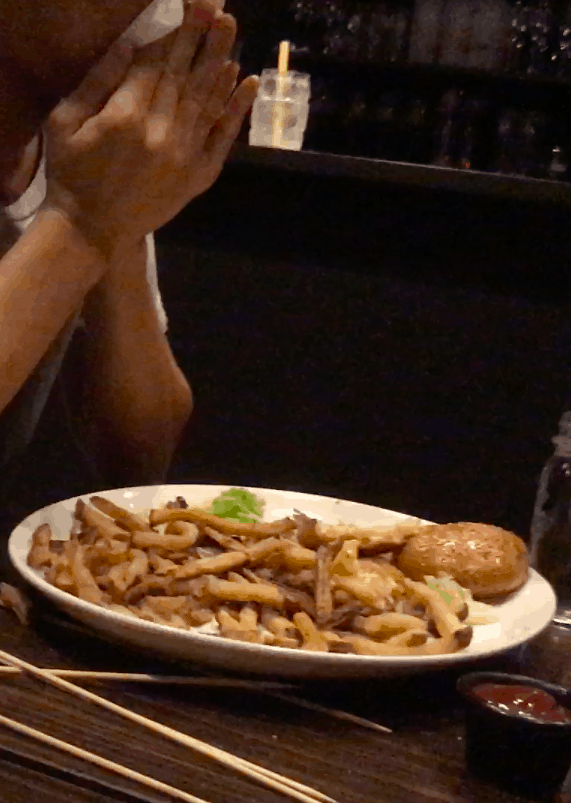 My eyes are watering and I wipe the tears with the back of my greasy hand. My stomach is sending alarm signals to the brain to stop but there is still the fries to go. My friends are oblivious to my pain.

“He’s going through a trance, he’s in his element, he’s in zen mode.”

It is somewhere around the halfway mark that I know I am not going to make it. My stomach is filled to the brim and I am only able to take in little morsels at a time. On the plate remains a forbidding mountain of fries.

“This is just like one extra large fries. Don’t let it go down the drain just because you’re too weak.”

No-nonsense Waitress comes to my aid. “Don’t talk to him,” she chides.

Snatches of conversation float over from the table beside us. From what I can make out in my foggy state, it is a couple on their first date. I hope the sight of a grubby fellow stuffing food into his mouth has not ruined their appetites.

The final minutes are miserable. It is now painful and impossible and I am merely nibbling on the fries in a show of perseverance. My friends, seeing no hope of a comeback, begin bantering with No-nonsense Waitress and chatting between themselves.

The beep of the timer seals the stinging defeat. Ashamed, I reach for a paper napkin to wipe the grease and tears. That was it. All the training, all the excitement has come to nothing.

Yet No-nonsense Waitress will not let it be. As she clears my plate, I could not help but wince at her parting remark:

“You want to dapao?” 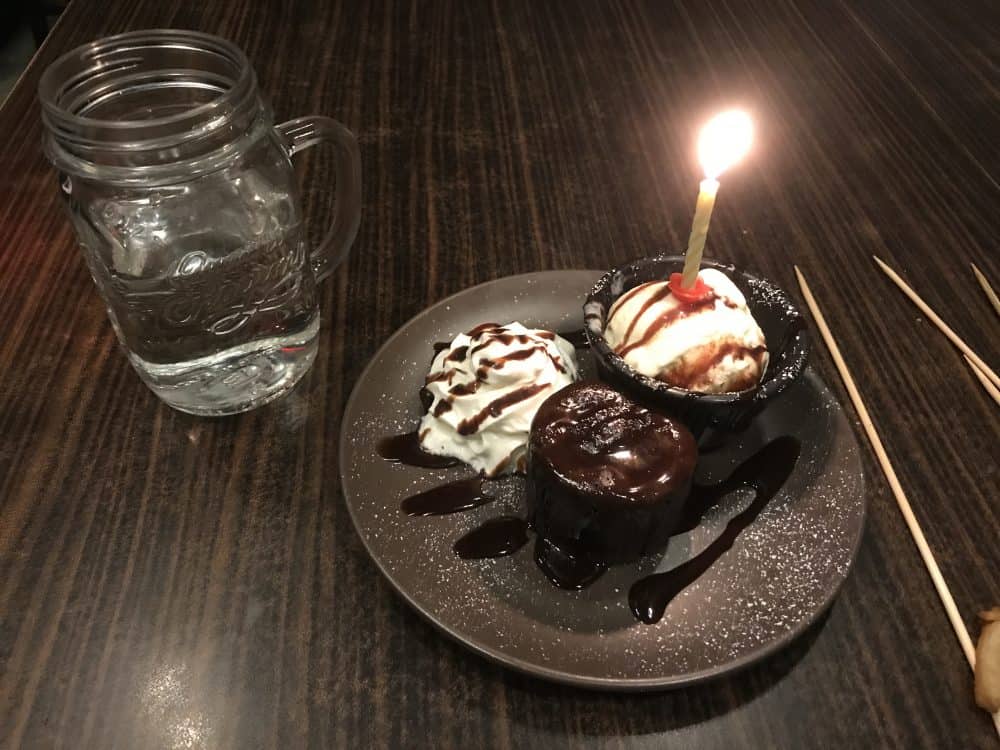