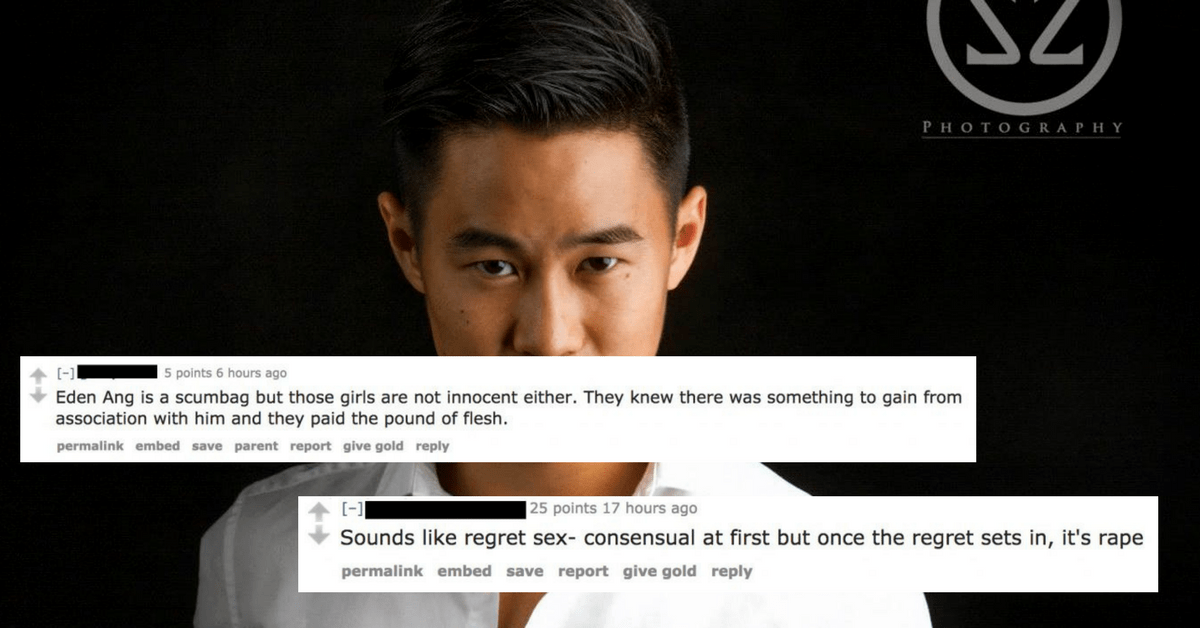 In Singapore’s own rendition of  the Harvey Weinstein scandal, though involving a far less relevant and powerful man, a series of alleged sexual indiscretions by the God-worshipping good boy YouTuber Eden Ang have come to light in a recent exposé by Rice Media.

While the strength and multiplicity of testimonies against him are compelling, I will – for now – withhold my judgment on his innocence or guilt.

For one, a D-list YouTuber producing clickbait content certainly doesn’t need any more time of day.

Secondly, it seems like any snap judgment made on his “upstanding” character will invite knee-jerk reactions that are likely detract from the main message of this article.

As much as I love to indulge in salacious drama like the next Singaporean, the discussion (or lack thereof) following the Eden scandal has brought to light just how ignorant Singaporeans are with regard to sexual harassment and assault.

If reading through the screenshots of Eden’s conversations aren’t enough of an ordeal in itself, I invite you to take a gander through the Facebook comments section or Reddit thread in response to the subject matter.

The veracity of the allegations aside, the common sentiment shared by those vilifying the alleged victims was that they had equal parts to blame. While the victim-blaming culture is still very much present across the world, at the very least the Harvey Weinstein scandal in Hollywood successfully ignited a discussion about sexual assault and harassment against women.

It also brought about the #MeToo movement, an awareness campaign seeking to illustrate the ubiquity of cases of sexual harassment against women. However, while my social feeds were briefly replete with #MeToo accounts from friends, there has been nary a murmur over the last two months.

But why aren’t we having the conversation?

Much like the bystanders who film MRT fights and post the videos online for the public opinion police to mete out punishment, I too might’ve been guilty of holding out for someone else to engage in actual discussion.

But as we wait with bated breath to find out how the Eden drama pans out, we should instead make use of the public attention on the issue, albeit temporary, to reignite the conversation and seek to educate Singaporeans on sexual assault and the notion of consent.

We Are Still Blaming The Victim

Whether or not we intend to, whenever we call into question the actions of the victim, we are shifting the blame away from the perpetrator and onto the victim.

“It’s this idea that people deserve what happens to them. There’s just a really strong need to believe that we all deserve our outcomes and consequences.”

says Sherry Hamby, the founding editor of the APA’s Psychology of Violence journal.

In our Asian culture where we’re so concerned about losing “face”, we’ve been brought up to judge others by the way they carry themselves, and likewise be judged by how we present ourselves to others.

I’m sure we’ve all had our fair share of “orbi quek”, “you see lah” and “I told you so” moments from our parents. 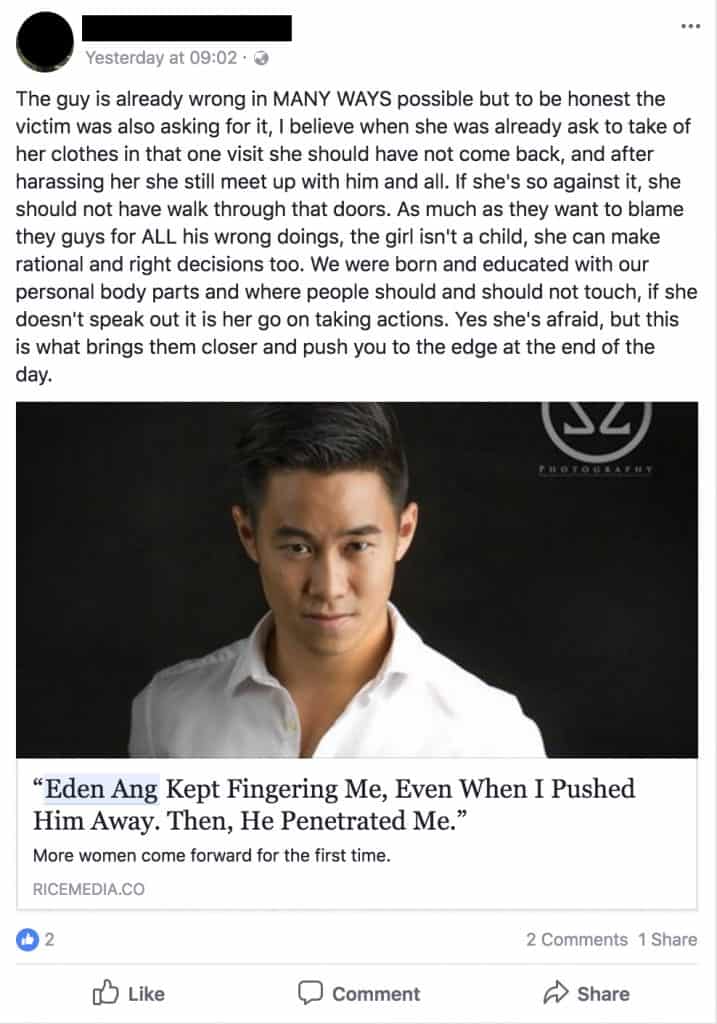 As a consequence of that, victim-blaming has become our instinctive response to crime, something that is extremely problematic in a situation involving sexual assault.

Victims of sexual harassment and assault often experience feelings of shame which can manifest as denial and minimisation. As if victims have not been humiliated and dehumanised enough, victim-blaming compounds the self-stigmatisation and blame that victims attach on themselves.

Why then would victims want to step forward or report assaults if they are forced to recount their ordeal many times over, only to have their actions gone over by a fine-tooth comb and with no conviction guaranteed.

Perhaps we blame victims because we refuse to acknowledge that something as heinous as sexual assault could happen to us, had we acted in the “proper” manner. However, sexual harassment and assault is far more ubiquitous than we’d imagine and victim-blaming behaviour is more likely to be a result of gross ignorance surrounding the complexities and intricacies of the matter.

Absence of Evidence Is Not Evidence of Absence

Quite literally the case of he said she said, most comments shaming the victims called into question the lack of evidence and the time elapsed between the crime and coming forward.

However, with most cases of sexual harassment and assault, it is nearly impossible to produce any evidence of the crime. How does one obtain evidence of sexual violence in the perpetrator’s own home, behind closed doors?

Armed with pitchforks, these public calls for evidence is yet another barrier that deters victims from coming forward, simply because there is little to none.

Even in the court of law, when the word of one is pit against another, a lack of hard evidence means that the witness testimony must be “unusually convincing”, another impediment that dissuades victims from making a report.

Whether or not the victim came forward three years ago or three days ago, to immediately dismiss a lack of evidence as a false accusation is onerous to say the least.

Firstly, we’re giving far too much credit to the relevance of Eden Ang for there to be a conspiracy of collusion amongst that many women.

Secondly, false accusations are equally as damaging to the accuser as it is to the accused. Other than social suicide, back in 2000, a 40-year-old housewife was sentenced to four weeks’ in prison back for falsely accusing her Chinese physician of rape.

In cases of sexual harassment and assault, the determinative element is often the presence of consent. However, again, with crimes beyond the watchful eye of the public, it is difficult to ascertain and provide evidence for whether or not consent had been given.

After all, it’s not like parties are signing “coitus consent forms” before engaging in sexual intercourse.

However, the line drawn between what parties perceive to be as consent and what does not, might be a little muddier in our parts of the waters. While our counterparts in the West tend to be more upfront about their intent to engage in sexual activities with another person, the same cannot be said for Asians in Singapore.

When it comes to relationships, Singaporeans are hardly the most forthright and expressive with their emotions and intentions.

Where “let’s grab a coffee” means “let’s date”, holding hands means you’re “going stead” and “let’s hang at my place” means “let’s have sex” – the concept of clear communication of consent may be a little more challenging for Singaporeans to grasp.

However, this gives sexual predators the excuse to say that they had misconstrued the situation, much like Aziz Ansari and his non-apology, and for us to default to questioning the behaviour of the victim.

Anyone Can Fall Prey To A Predator

Sexual perpetrators are called predators for a reason.

Much like how a predator hunts down its prey, many sexual predators exploit their power to “hunt” for their next victim – oftentimes young, impressionable and insecure girls.

“And in a way every social action is a negotiation, a compromise between ‘his’, ‘her’ or ‘their’ wish and yours”,

While we are inclined to find fault in the victim’s account for repeatedly putting herself in a compromising situation, it’s not that farfetched an idea to think that someone could be emotionally manipulated and gaslighted into repeatedly going back to their abuser.

After all, the mind has a clever way of tricking itself into turning a blind eye to things it doesn’t want to acknowledge.

It’s easy for us to judge victims for not just “getting up and leaving” but haven’t we all been in social situations where we weren’t just able to say no and leave?

It is why partners stay in toxic relationships. It is why there’s something called Stockholm syndrome. It is why victims continually go back to their abusers, even after repeated abuse.

Truly predatory and abusive actions can allow even the brightest and most powerful of individuals to fall prey to. We saw it with Weinstein and we will continue to see it if we do not turn the conversation on its head.

Instead of feeding the media’s sensationalisation of the Eden Ang scandal, we need to stop trivialising sexual assault and instead, start admonishing reprehensible behaviour.

Instead of asking the victims why, why and why, it might be more helpful for us to look into how we can create a supportive and safe community for victims to come forward and for actual change to be enacted.

Without this change in mindset, we will only continue to make excuses for a sexual predator’s behaviour, further emboldening and enabling them to exploit the public and self-internalised shame imposed on the victim.