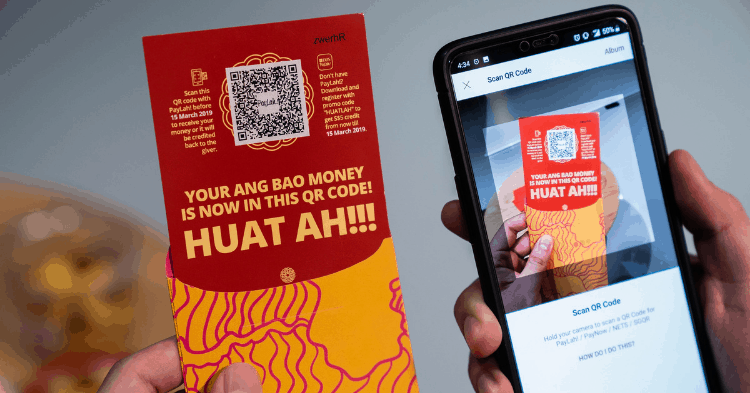 Singapore is well on its way to becoming cashless – with increasingly common card payments and other cashless apps accepted at many retail outlets, it’s safe to say that many of us can now survive an entire day without cash.

While there are some who find a sense of assurance in having cash around, there is no denying that our lives have been made more convenient due to cashless apps. Instead of spending time counting cash that has been pooled together, splitting a bill amongst friends now becomes quick and simple with a few taps on our mobile phones.

Hoping to spark a new change is DBS’ pilot launch of the world’s first loadable QR red packets – which aims to provide users with a new way to celebrate Chinese New Year (CNY) this year.

The DBS QR Ang Bao offers a fun, digital twist on the age-old tradition of red packet exchange, allowing DBS PayLah! users to preserve the traditional act of giving and receiving physical red packets, while eliminating the use of cash.

To those unfamiliar with how it works, here is a short introductory video:

Using DBS PayLah!, those who wish to give the DBS QR Ang Bao need to scan a unique QR code found on a DBS QR Ang Bao to ‘load’ a cash value of up to SGD 999.

They may then gift the DBS QR Ang Bao to their family and friends, who can scan the QR code with their own DBS PayLah! app to receive the loaded amount.

Each DBS QR Ang Bao contains a unique QR code and serial number for added security, and users can easily cancel a particular DBS QR Ang Bao’s loaded funds via the DBS PayLah! app in the event that it gets lost or stolen.

How Popular Is It?

We went down to Toa Payoh on 25 February – the launch date of the QR Ang Bao – to find out if this new way of giving would be popular with the masses.

Interestingly, there were mixed responses from different ages.

Amongst the older generation who gives ang baos, some felt that giving cash was a tradition that had to be stuck to, while others felt that the convenience of DBS’ QR Ang Baos meant that last minute ang baos for unexpected guests could be prepared without worrying about having sufficient cash.

Meanwhile, the younger generation had opposing views as well.

One of the interviewees welcomed the initiative, stating that the QR Ang Bao would mean a lot less fuss as there is lesser cash to carry on hand. Yet another preferred the traditional way, joking that “nothing beats the smell of cash”.

However, he also agreed that QR Ang Baos could become more common in the future as Singapore transits towards becoming a cashless society.

Watch the full interview below: