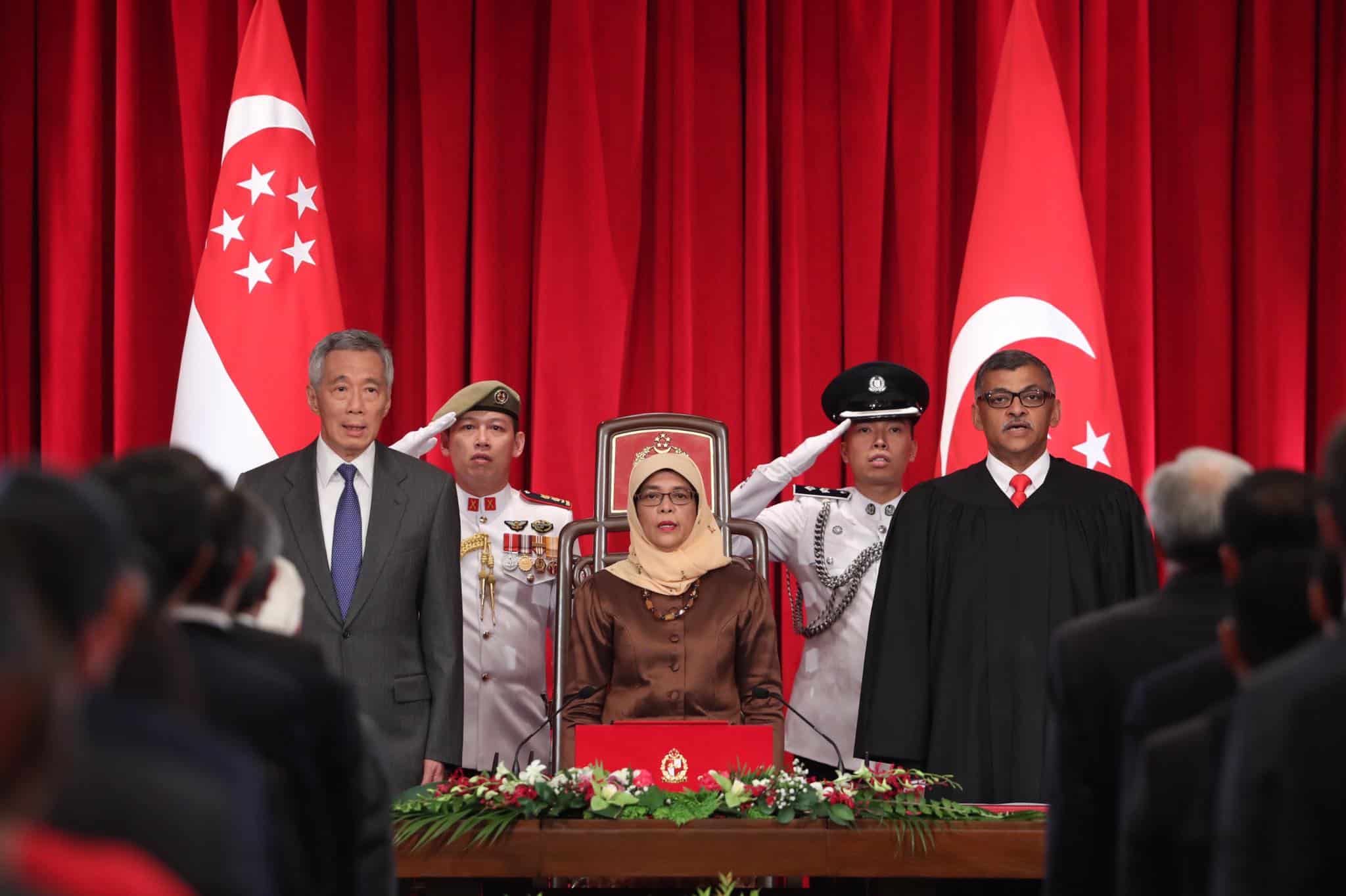 The 23rd of December marks the first 100 days of President Halimah’s presidency. Given her walkover victory at the recent elections, many have been curious about the changes that she will bring.

But what exactly has she done?

After all, that’s all a president in Singapore does right?

For a political leader that some would say holds little real political responsibility, I was prepared to stretch myself thin to scour the internet for good source material.

To my surprise – Mdm Halimah, well, surprised me.

What started out to be a quick Google search turned out to be a pretty long one, as I found myself at page 12 of my Google results reading about news of Halimah’s exploits.

After page 15, I came to a pretty confident conclusion: Mdm Halimah has actually been a pretty busy president.

To be fair,  Singapore’s former speaker of parliament hasn’t made the front page headlines ever since the buzz from her very controversial reserved presidency saga died down.

However, if you actually open up the pile of newspapers sitting at the corner of your house or do a quick search outside of Facebook, you’d be actually be surprised to find out that Mdm Halimah hasn’t been shaking her leg inside the Istana office as conventionally thought.

In fact, I actually found out that #ourpresident Mdm Halimah has been busier than some MRT Stations during peak hour,  having participated and fulfilled a long list of diplomatic missions, state visits, and presidential duties.

What The President Does

Like all reviews, we have to actually understand what  we are reviewing about.

To see how Mdm Halimah has been doing her job as the President of Singapore, I will analyse at her actions based on two broad categories – her responsibilities and her promises.

As with all presidents, its important to look at how well they carried out their election promises.

After all, an election promise is what gets them into public office in the first place, and that contributes to their legitimacy.

I mean, look at President Donald Trump and his famous promise to build a wall. American voters would freak out if he didn’t build that wall right? (Which he hasn’t yet, by the way, last time i checked).

So, we will look at her election campaign, and see whether Mdm Halimah has carried out her promise to “do good, do together”. It’s grammatically awkward I know – but hey, its “catchy“.

Other than reviewing what she did to get into the job, we will next look at how she has fared inside the job via her roles and responsibilities.

So, in case you weren’t paying attention during your social studies class, this is what broadly constitutes the role of the president in Singapore, as explained by gov.sg:

Now that we have the criteria out of the way, let’s get down to it.

To begin, what exactly did Mdm Halimah promise in her electoral campaign?

Even if you did follow the news you would be pretty clueless nonetheless because there were no intense debates or rallies unlike our previous iterations. Lets just say it was a pretty short campaign due to…reserved reasons.

Still, we were still able to see a glimpse of her campaign platform early on.

With a slightly awkward but benign slogan of “Do Good, Do Together”, Mdm Halimah hoped to “unify the nation”.

By that, she hopes to bringing across a message of inclusiveness by reinforcing the values of meritocracy, multiracialism and social cohesion (Merlion screeches).

How has she fared on this end?

To be fair, I’d say she has done a pretty decent job of playing the role of the “People’s President”.

Reinforcing the whole multiracialism message, she hosted a dinner for members of the Inter Religious Organization at the Istana just two weeks after her election in September, where she lauded their efforts in maintaining racial and religious harmony.

Two months later in November, she also presented the National Youth Achievement Award to a couple of promising young Singaporeans for their enthusiastic efforts in contributing to society.

Later that month, she also took some time out to meet with community volunteers at the President’s Volunteerism and Philanthropy Awards.

Finally, just two weeks ago, Mdm Halimah also recognized several outstanding social workers – who have worked with the mentally disabled and disenfranchised – at the Istana.

On that front, Mdm Halimah gets a thumbs up.

However, if there’s one incident where Mdm Halimah would probably lose some marks, it would have to come from her HDB housing saga.

In the lead up to her election, Mdm Halimah had actually stated that she would continue living in her jumbo HDB Flat in Yishun, a residence she had owned for over two decades.

While she got her wish for approximately two weeks, she eventually had to move out into the Istana due to security and logistical reasons.

It is a pretty valid reason to be honest – I mean imagine the trouble her neighbours had to go through – but no one likes political u-turns.

For that, we have to reluctantly give a disapproving nod. It was a blessing in disguise though, seeing as to how her flat was situated in – gulp – Yishun.

That aside, I think Mdm Halimah has managed to do a pretty decent job of delivering her slogan and its related promises. With her support for multiracialism and the socially disenfranchised, I’d say she has certainly done some good things  and done them together.

I am aware that our president is not the typical all action head of state that we’re used to. Politically, the president’s influence is pretty limited.

That’s not to say that they’re there to simply collect a salary though – they have a couple of constitutional responsibilities, which include holding a key to our national reserves, and possessing the authority to veto key public appointments.

For good reason – tapping on our national reserves is rarely a good sign – Mdm Halimah has remained inactive on being our guardian of the reserves.

That said, another of the President’s lesser publicised powers is their authority to pardon criminals.

Just a couple of weeks ago, the killer in the infamous murder of Anthony Ler’s wife had actually just pleaded for clemency with President Halimah, and it remains to be seen what her decision will be.

Until then, we can’t really comment on her constitutional responsibilities.

Moving on to Mdm Halimah’s ceremonial duties, she has actually been quite the diplomat in the first 100 days of her job.

Singapore is everybody’s friend, and Mdm Halimah has been hard at work maintaining those friendships.

Mdm Halimah first displayed her diplomatic clout two weeks into the job when she wrote a letter to Mexican President Enrique Pena Nieto, as she expressed her condolences over the 217 deaths caused by the 7.1 magnitude earthquake in the country on September 19.

She was also especially busy in the month of October where she hosted two separate state banquets for the emir of Qatar Sheikh Tamim Bin Hamad al-Thani and Prince Charles (with his wife Camilla, the Duchess of Cornwall), and even attended the funeral of the late Thai King Bhumibol Adulyadej.

To top it all off, she wrote another letter of condolences to Egypt’s President and acting prime minister over the terrorist attack on the Al-Rawdah Mosque in November.

Quite literally, she’s been a good host and a steady pen-pal. I think it’s safe to say that Halimah has been carrying out her ceremonial duties rather faithfully.

In the area of community work, Mdm Halimah is no pushover either.

I mean, she did after all run on a platform of social cohesion. Kudos to her, however, as she has championed a variety of causes in the first 100 days of her presidency.

Apart from her expected appearance at the President’s Star Charity Show this month, Mdm Halimah has gone on to support The Agape Village – which provides assistance for at-risk youth, domestic helpers, and senior citizens with dementia.

She also turned up for a painting session at the Community For Successful Ageing at Whampoa Centre.

Mdm Halimah seems to be especially involved in working with special needs children, as she visited the Rainbow Centre and the Cerebal Paralsy Alliance Singapore in October and November respectively.

In October, she also pushed for a new programme that gave special needs persons internships at the Istana after being inspired from a visit to the Centre for Adults of the Association for Persons with Special Needs.

On an slightly unrelated note, Mdm Halimah also managed to get a couple of new appointments, as she became a patron of the Girl Guides Singapore this month, and was also made an NUS Chancellor in November.

So, while Mdm Halimah hasn’t had the chance to show her constitutional mettle, she has clearly done solid work ceremonially and within the local community.

Score: For that, Mdm Halimah gets an assuring thumbs up as we give her a solid 9/10.

Especially with the nature and circumstances surrounding her highly controversial election, moving into new political territory from the speaker of parliament to becoming the president of the country must be a pretty daunting task for Mdm Halimah.

Even the history of the presidency itself is surrounded by plenty of debate and criticism, and that would’ve done Mdm Halimah no favours at all.

Still, I think given the tasks and responsibilities placed upon her shoulders – however limited or ceremonial – it’s pretty safe to say that Mdm Halimah has been doing her job as Singapore’s 8th President.

In a time where high-profile presidents and political leaders are under constant public scrutiny, it was surprisingly difficult to scrutinise Mdm Halimah’s actions in her first 100 days.

She hasn’t done anything crazy like starting a Twitter account to let loose controversial political opinions. (In fact, she has a nicely curated Facebook page). She’s been respectful in meeting world leaders, genuine in her interactions, and aware of the social needs of Singaporeans.

Also, no, I’m not saying this because I fear reprisals from being critical of a political leader. From what we’ve seen and just read, Mdm Halimah seems to be a genuinely nice person who just also happens to be the president of our country.

To the average Singaporean, it may seem like all the president ever does is smile, look great for photo opportunities, and collect a handsome salary at the end of it.

To be honest, they can’t do much politically in the view of the public, but being a president in Singapore is perhaps more than just symbolism and smiles.

I’m not too sure about our previous presidents, but Halimah has been low key doing her job, and doing it well.

So, well done Mdm Halimah. We’ll meet again at the one year mark.