“I was supposed to be hospitalised today because my childhood asthma acted up.”

Full of energy and optimism, Ms Connie Tan’s cheerful countenance betrayed none of the anxiety she had been experiencing an hour ago. Connie shared that she had been busy with renovation works and inhaling the toxic fumes had triggered her childhood asthma.

Despite this, the upbeat museum owner assured me that she was going to be fine, and my worries faded away as soon as Connie started sharing about her love for turtles as a kid, her enthusiasm bubbling over.

“My parents didn’t allow me to have cats or dogs when I was young. So when I was 6, I got my first turtle and kept it a secret from them. Though they had to find out about it eventually, my dad grew to be supportive [of my choice of pet],” she smiled playfully.

“It was such an intelligent turtle which toilet-trained herself! Not all my pets have names, but this was one did.”

True to its namesake, her Live Turtle & Tortoise Museum features two main aspects: an area where the adorable creatures roam around in adequately sized contained spaces, as well as an artefact museum.

Connie has clearly designed the area to be an optimum habitat for these roving reptiles.

At an open grass patch where turtles are seen roaming about, visitors are welcome to feed these adorable cretins some of their favourite lettuce.

Some aquatic turtles can be seen swimming around lazily in their aquariums, and there’s even a pond where terrapins are baking lazily under the sun.

I wasn’t surprised to hear that it was a family business. Connie’s turtles are all her pets, and her father who is an avid traveller has bought a gamut of turtle artefacts from all over the world.

“My dad was actually the one who jokingly said that we could get all my turtles together, put them into a museum and charge 2 or 3 dollars for everyone who comes and give [all the proceeds] to charity… but in the end, we really did that.”

What other activities visitors can expect other than looking at these cute creatures? LTTM also features an art corner for kids, turtle races and educational workshops.

At the moment, they are attempting to sell their workbooks to primary schools.

“We want the primary school children to gain more awareness of how to take care of them.” 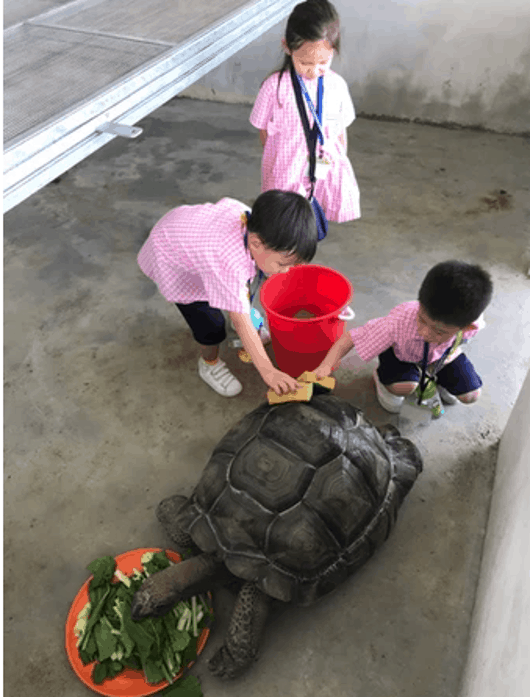 With a sheepish smile, I pluck up the courage to ask her perhaps one of the most dreaded questions turtle lovers always hear. “So… what’s the difference between turtles, tortoises and terrapins?”

Connie was more than happy to answer my supposedly eye-roll worthy question.

“Turtle is a generic term that encompasses all turtles and tortoises. They are typically water-based and have flippers. Tortoises live on land whereas terrapins thrive on both land and water and have sharper claws and are smaller.” 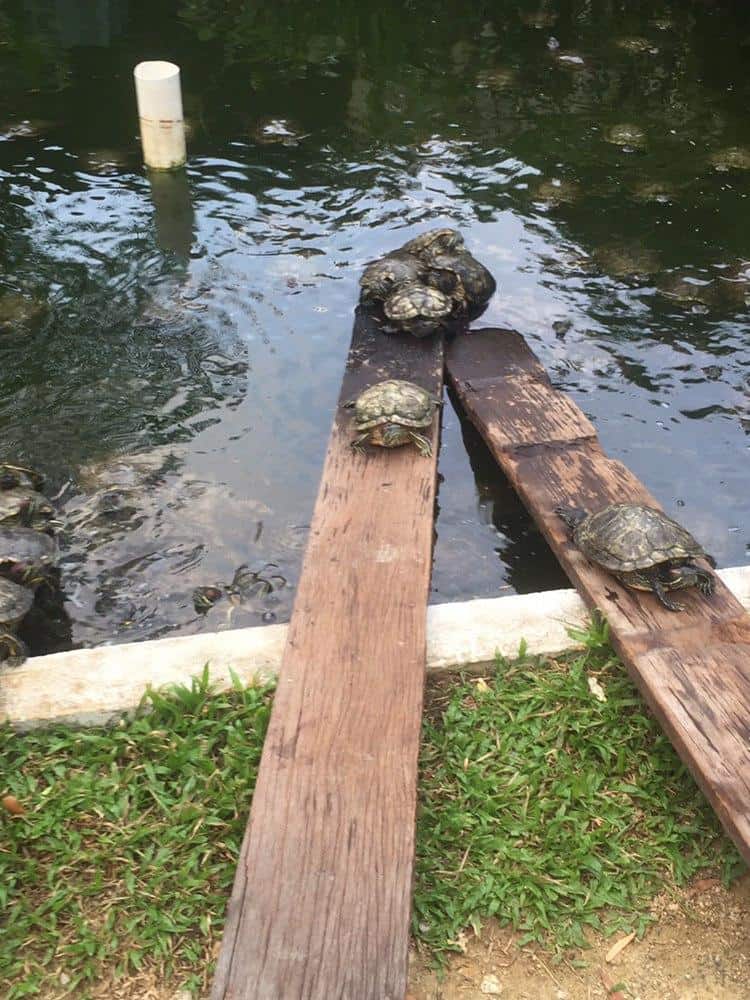 Different species actually do exhibit different behaviour. She shared that it was rather difficult to get close to certain more aggressive breeds like alligator snapping turtles.

Her experience totally belied my assumption that turtles were calm and slow-moving creatures. “When they run, they really run!” Connie says with a laugh.

“Sometimes, they may also attack their own species. For instance, we don’t put all the radiated star turtles together as they can pick fights with one another”. On the other hand, terrapins can live together in relative harmony.

What should aspiring turtle owners take note of?

Connie holds firm convictions about this. “I would discourage them from buying turtles as they are very high maintenance animals. They actually produce a lot of waste: up to 400% more than fish.”

She adds that turtles actually need ample space to grow and roam around in: the bigger the turtle, the larger the tank it is placed in must be. 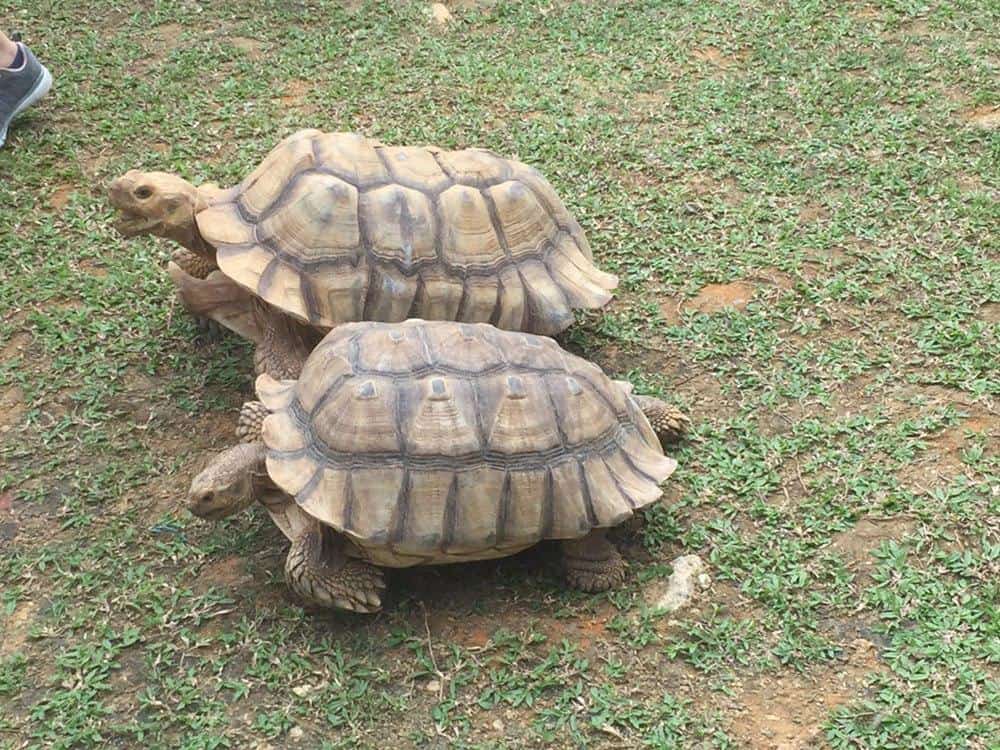 Instead, she promotes the purchasing of fish. “Since they’re both aquatic, people who like turtles usually also like fish. [For turtles], once they are big, people think that they’re ugly and don’t wish to have them anymore and want to donate them”.

She shakes her head in disapproval.

Connie admits that she gets mildly frustrated when people want to do so as it is evidence of their irresponsibility.

They might think they are doing her a favour, but the responsibility to take care of another turtle falls on her even as she is struggling to upkeep what she already has. She pointed out a giant river turtle to me, which to her horror had a hole drilled in its shell when it was first found. 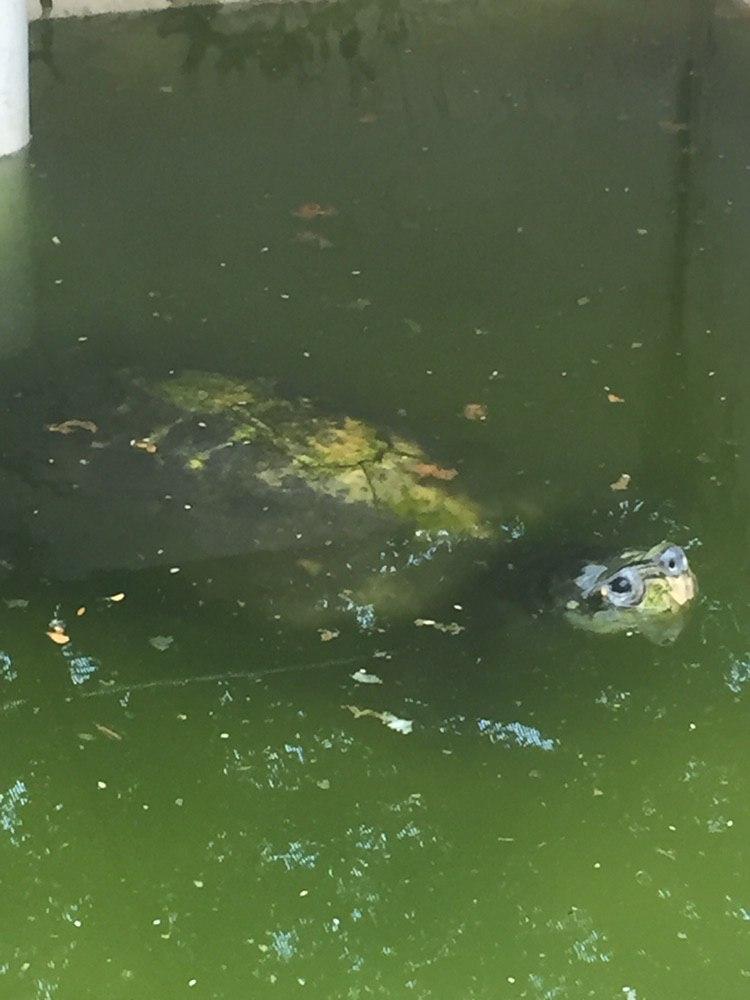 “He was so scared. We didn’t know if it would survive but a surgeon repaired his shell. In the first 6 months, it just stayed in one corner and refused to come out during the daytime.”

“So [this is why] I put up quite a high fee to deter this [sort of abandonment behaviour]. I know I’m a responsible pet owner. Are you?” she declares emphatically. 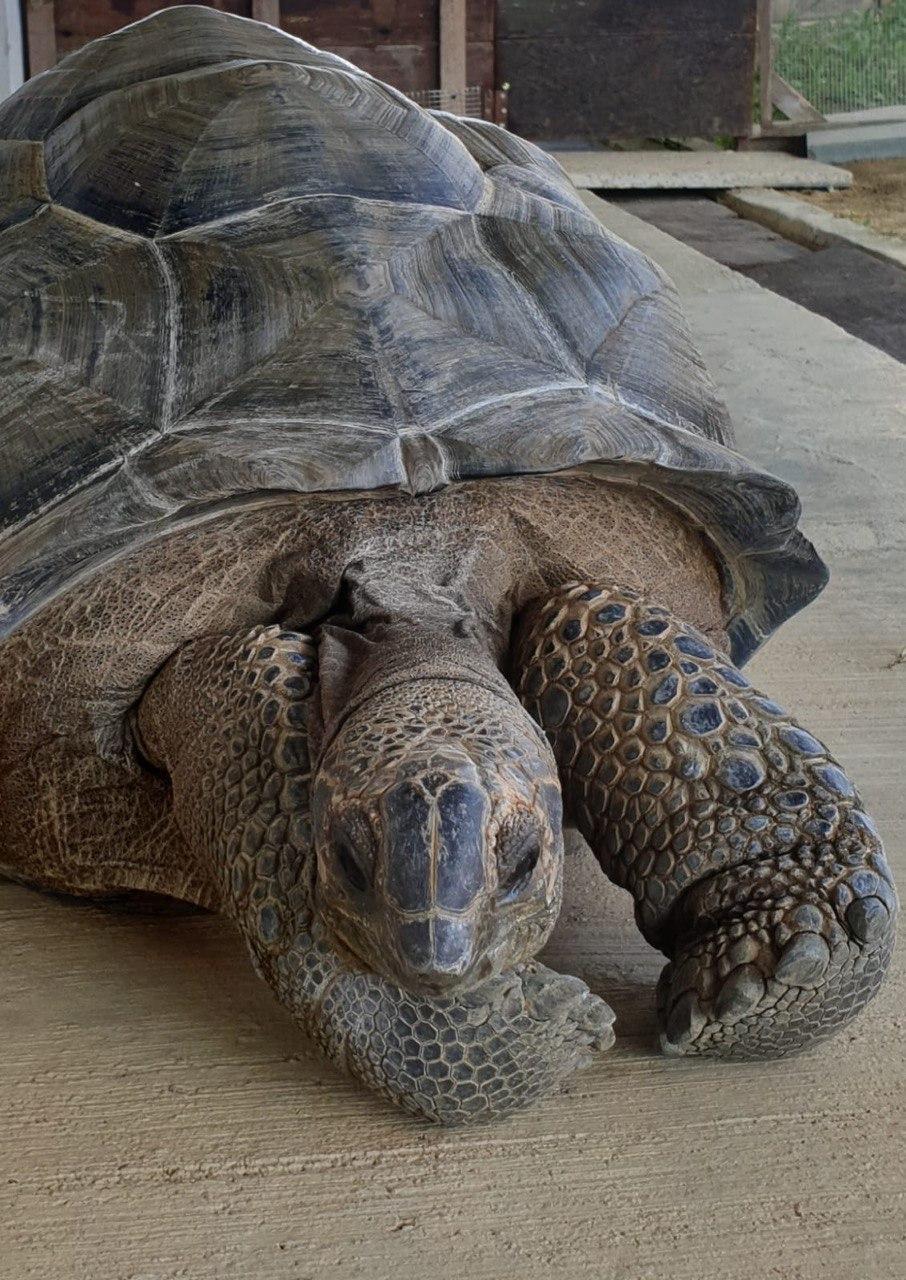 Only 3 out of the 40 over species in the museum are not endangered. Clearly, a lot more effort has to be put in to ensure the continual survival of many turtle species.

And so I asked — what can the average Singaporean do to ensure their continuity? Would volunteering be a plausible option?

Unfortunately, as the number of volunteers increases, there are also people who take advantage of this opportunity and brazenly request for free entry in exchange for 3 hours of volunteer work. “A few of them even got angry.” Connie sighs.

“I don’t want people to think that it’s too expensive to go out and enjoy a good day with their children. In the first place, my father and I started this museum for the sake of sharing our turtles. Our first pricing was at $5. We didn’t want to make money.” 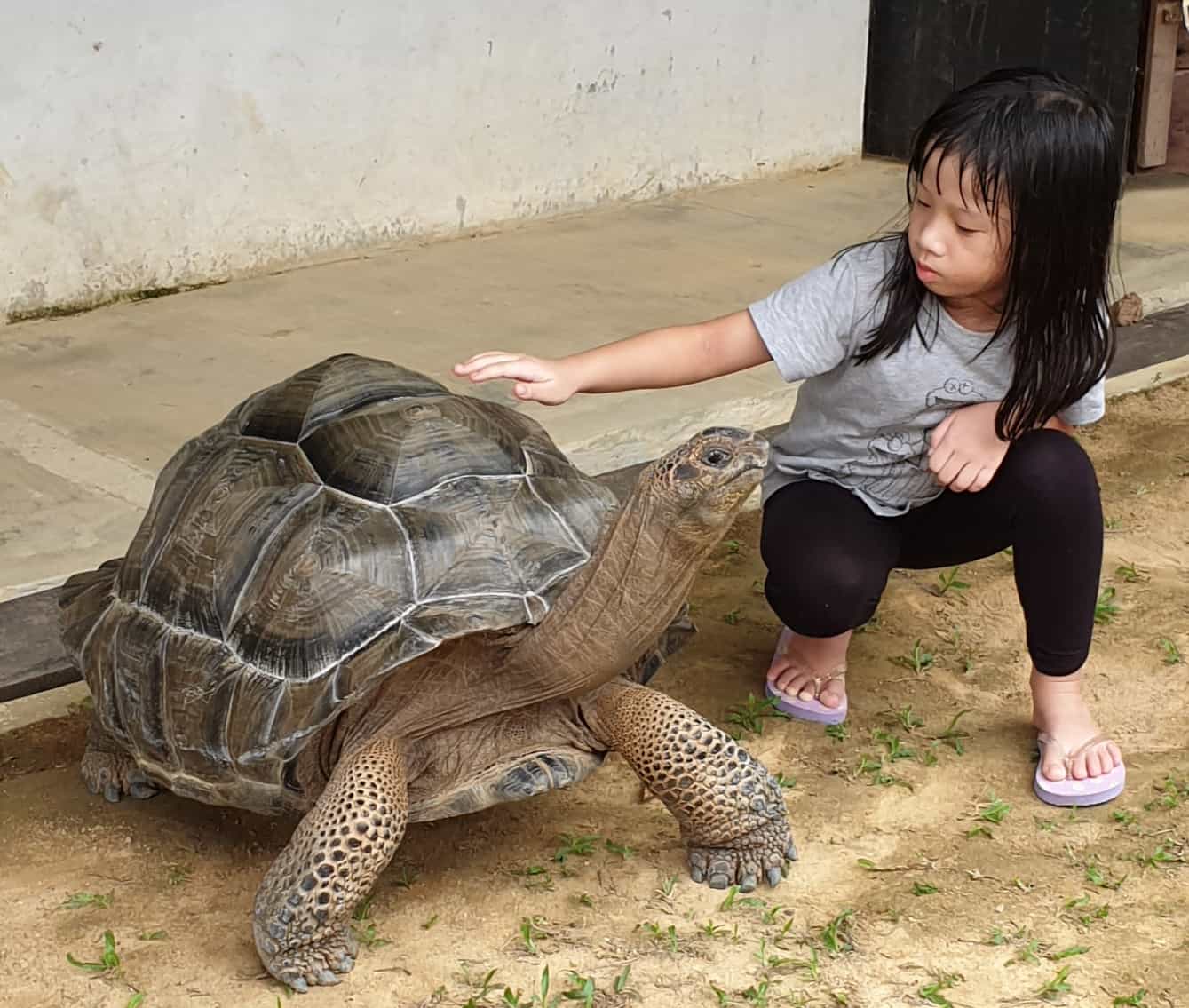 “Back then, we had to leave Chinese Gardens because the area had to be developed. But the moment we do, we don’t have a permit. So I wrote to PM Lee.”

Connie is a proud patriot of Singapore and strongly believes that the survival of LTTM can greatly contribute to a uniquely Singaporean identity.

Thankfully, Prime Minster Lee Hsien Loong was sympathetic to her situation and returned a personal response that The Ministry of National Development would look into it. At the same time, her petition gained traction and a great outpour of financial support came in.

Pet Project of an Accomplished Artist

What no other news outlet has picked up on is the fact that Connie is an artist. As a NAFA (Nanyang Academy of Fine Arts) graduate, Connie holds a diploma in graphic design and is in the midst of opening an art gallery.

Unsurprisingly, she has several art pieces of her beloved pets. Her art style has evolved over the years, from a realistic form to a more abstract yet detailed style. 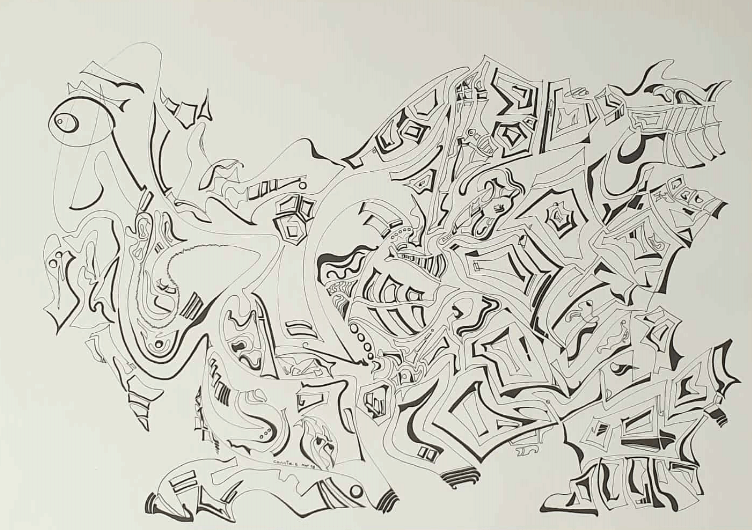 This fascinating piece is Connie’s depiction of Xiaohei, who has garnered public attention as the biggest land tortoise in Singapore. Try and see if you can spot the outline of her shell, head and legs! 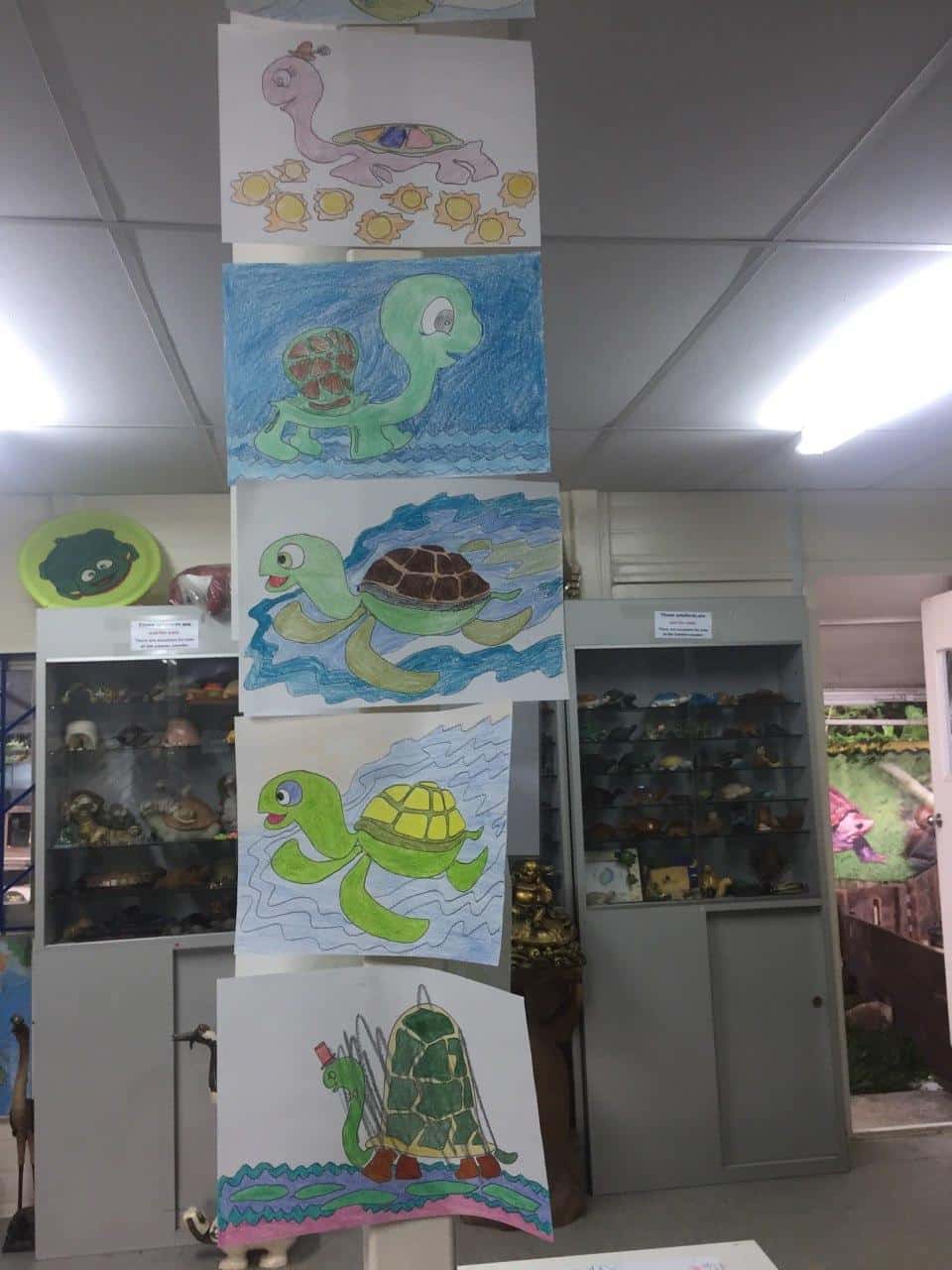 To ORTO And Beyond

“The environment here is not very optimal. I spent a lot on vets so that my turtles can stay healthy. Soon, this area will be developed into a HDB estate, so we would have to move again.”

She also shares that she has to invest in medicinal herbs for turtles who are prone to falling ill.

As I chatted on with Connie, people pass by and try to peer in inquisitively. “Need money [to enter]?” they ask boldly.

Against all odds and obstacles of financial woes, Connie’s awe-inspiring passion and love for turtles have certainly thrived.

Keep updated on their activities and workshops on their Facebook page and website, and find more pictures on their Instagram. If you haven’t been there, it’s definitely time to head down to LTTM for a fun-filled family day out!