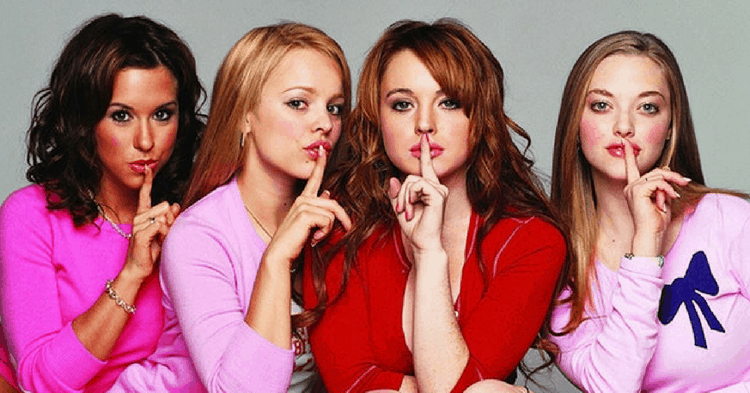 “Luckily you are wearing this dress because the weather is so hot… But if I were your mother, I’d tell you to put on a jacket”. An auntie I had only met twice in my life said this to me last week.

I immediately put on my jacket to avoid awkwardness. And in retrospect, I shouldn’t have.

As females, I’m sure we’ve often heard of such remarks.

So I’ll begin on a sombre note which will hopefully end up being a liberating reflection – you’ll have to be the judge of that:

Women do not support each other, which is why we will never be able to attain true gender equality.

Women Coming Out On Sexual Harassment

Women have been coming forward on social media about their sexual harassment encounters – being touched on  public transportation, having their upskirt photos taken, having to endure lewd remarks and being ogled by men.

Personally, I cannot emphasize enough about how much or how often I can relate to this.

As a woman I find myself being the object of male gaze every single day – cars slow down and honk at me when I’m alone at the bus stop, men leer at me on trains, as though mentally undressing me.

Which is why I have nothing but admiration and support for those who have come forward to address what we all see as an uncomfortable issue. Which is why I was also surprised that a significant proportion of the inevitable backlash actually had come from my own gender.

“Actually, you are not that pretty. Stop being so dramatic and full of yourself.”

“So scared people look at you, stay at home forever lah!”

These are actual, victim-shaming comments made by females on sexual harassment posts. See below. 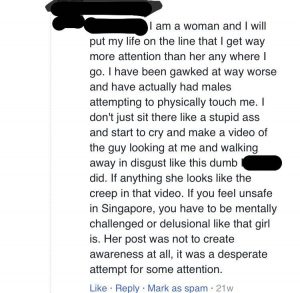 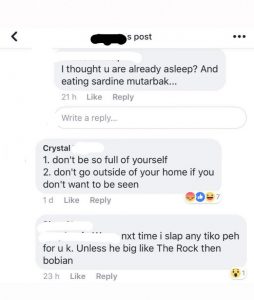 Male gaze aside, it’s time we talk about the women.

Are we actually more misogynistic than men- at least on social media?

The Sisterhood, Misogyny And Slut-Shaming

There is just something dysfunctional in the way the sisterhood works – we are put through this parallel struggle of first, pushing to be on a leveled-playing field with men and second, also having to fight equally, if not doubly hard, to gain the respect of other women. 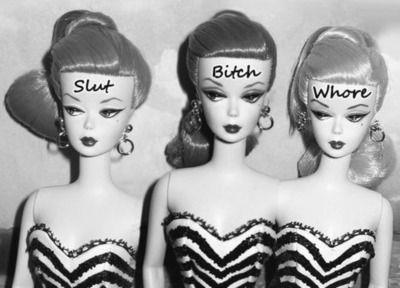 This is heart-breaking at best- we have so much to catch up on even without fighting amongst ourselves. And at worst… where is this ‘sisterhood’ solidarity we so triumphantly proclaim?

Women (and men), if you truly believe that you should just wear more clothes or stay home if you don’t want to fall victim to sexual harassment, then you have what is defined to be internalised misogyny. Your mindset stems from years of observing societal practices demean women to the point where you eventually and subconsciously internalise those misogynistic beliefs. 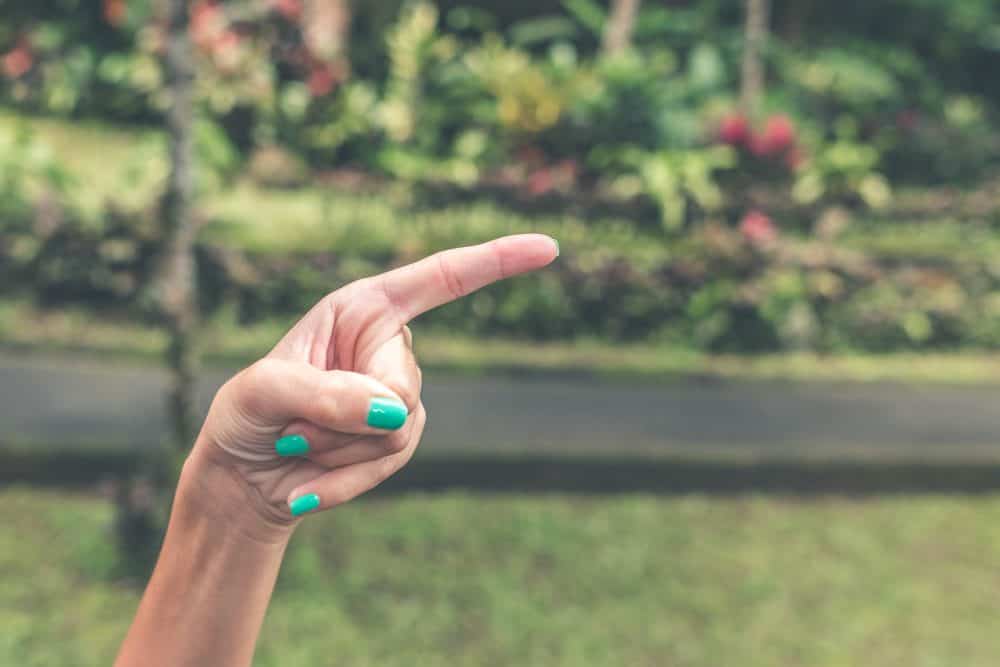 When you begin applying that mindset by validating sexual harassment through conforming to those beliefs, you start thinking that the fault lies with the victim.

Women (and men), when you point fingers at another female and make a passing comment about how her shorts are “too short”, or that her dress is “too revealing”, or that her top is “too low cut”, you are slut shaming her.

It doesn’t matter whether you commented out of genuine concern for her safety, or whether you were just being bitchy- as long as you criticize her attire, you are slut shaming her.

Generational Problem? We Are Catching On As Well 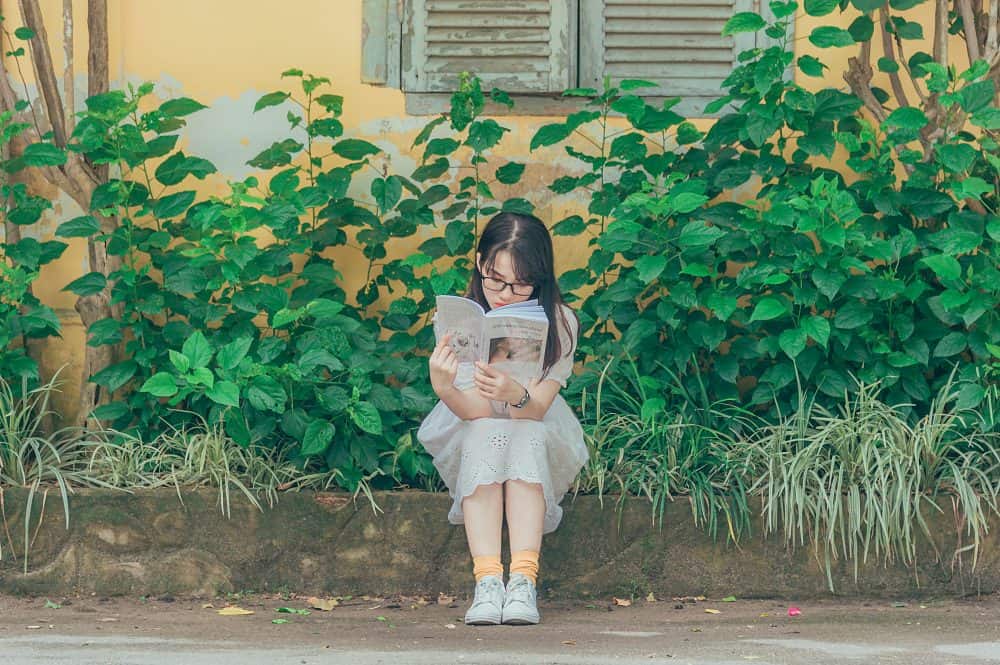 I concur. But it really is up to us to make a change and stop carrying this mindset forward.

And it definitely isn’t easy to stop these thoughts – misogyny is so prevalent today, it is the new normal. 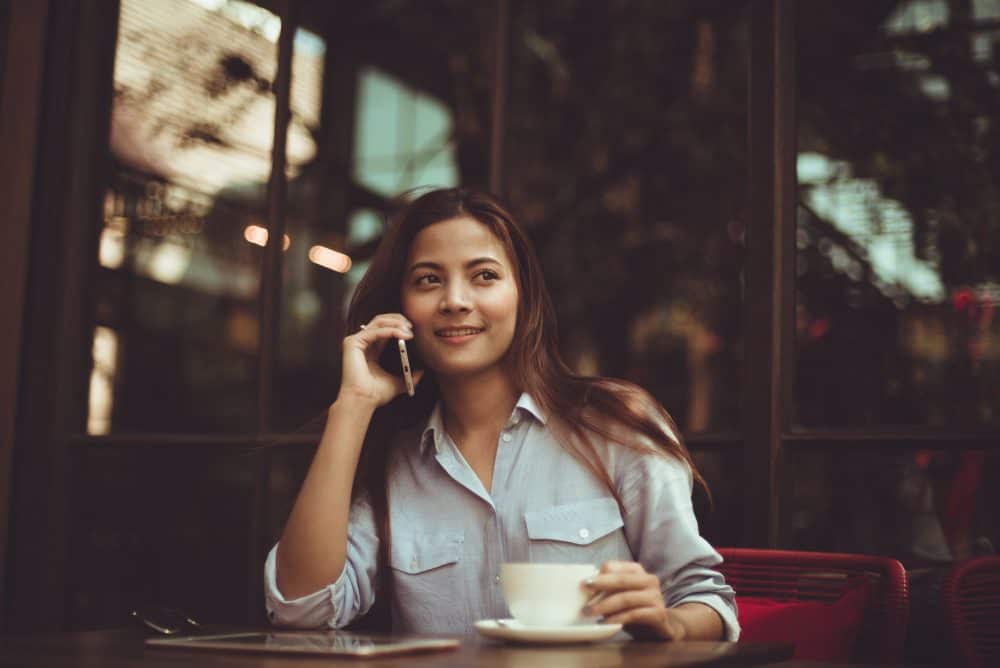 Many of us girls have even caught on, objectifying ourselves to get what we want- how easy and common is it to tell your girlfriends to “work your [their] charm on the waiter and maybe he’ll get us a table without having to queue”?

Personally, I know it’s pretty darn easy, because I’ve done it before.

Should We Only Blame Men For Gender Inequality? 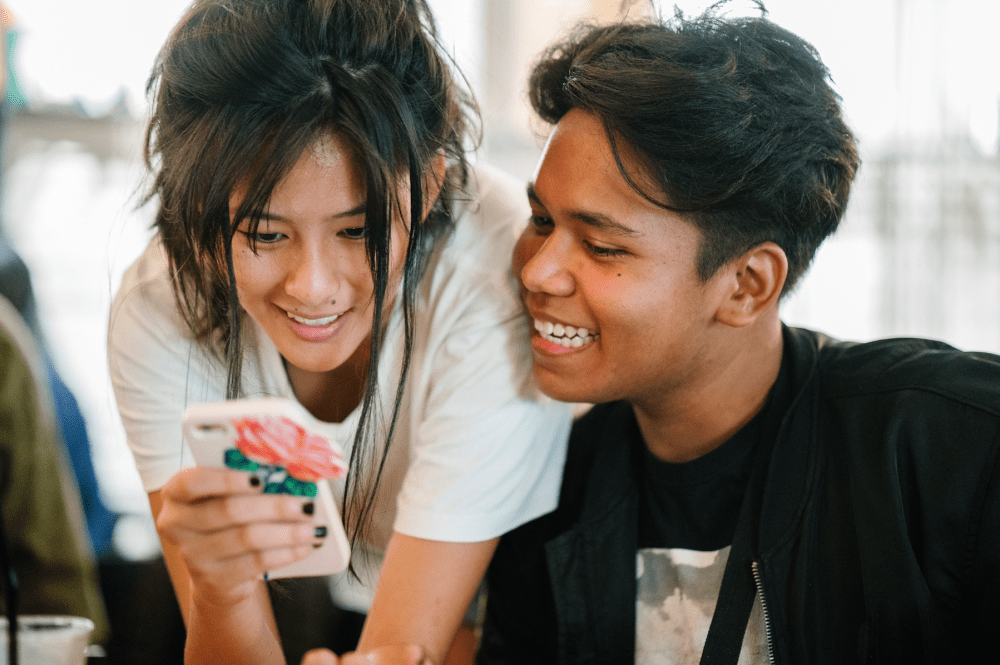 So what I’m saying is that it isn’t fair to push all the blame solely to the men and demand change wholly from men when we ourselves are incapable, or even unwilling, to get our act together.

I am inclined to believe that there is a little misogyny internalised in everyone – even us women. With just so much comparison, jealousy and contempt amongst ourselves, are we truly supporting each other in this movement for gender equality? How can we expect men to respect us if we don’t even seem to respect each other?

Let this serve as a reminder the next time a misogynistic, slut-shaming comment hangs precariously at the tip of your tongue.

Afterall, as Madeleine K. Albright once so famously said, there is a special place in hell for women who do not help other women.