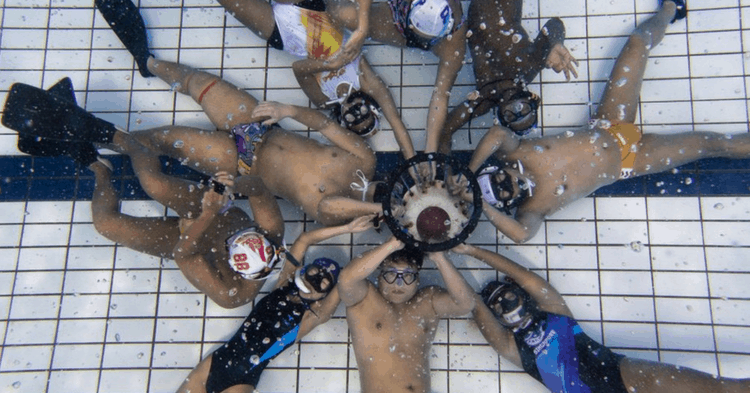 If you happen to spend your sleepy Sunday mornings at Queenstown Swimming Complex, you will be greeted by a rather peculiar sight; a merry bunch of guys and gals in swimming caps, snorkels and flippers breaking the water surface repeatedly before plunging back into the depths of the deep pool.

A closer look will let you in on the real action bubbling underneath.

With a history that dates back more than 50 years, underwater rugby originated from Germany in 1961 before becoming popular among mostly Scandinavian countries.

“During the winter time, rugby players wanted to stay active but also train safely. So they decided the next best thing was to play it in the pool, with more or less the same rules.” 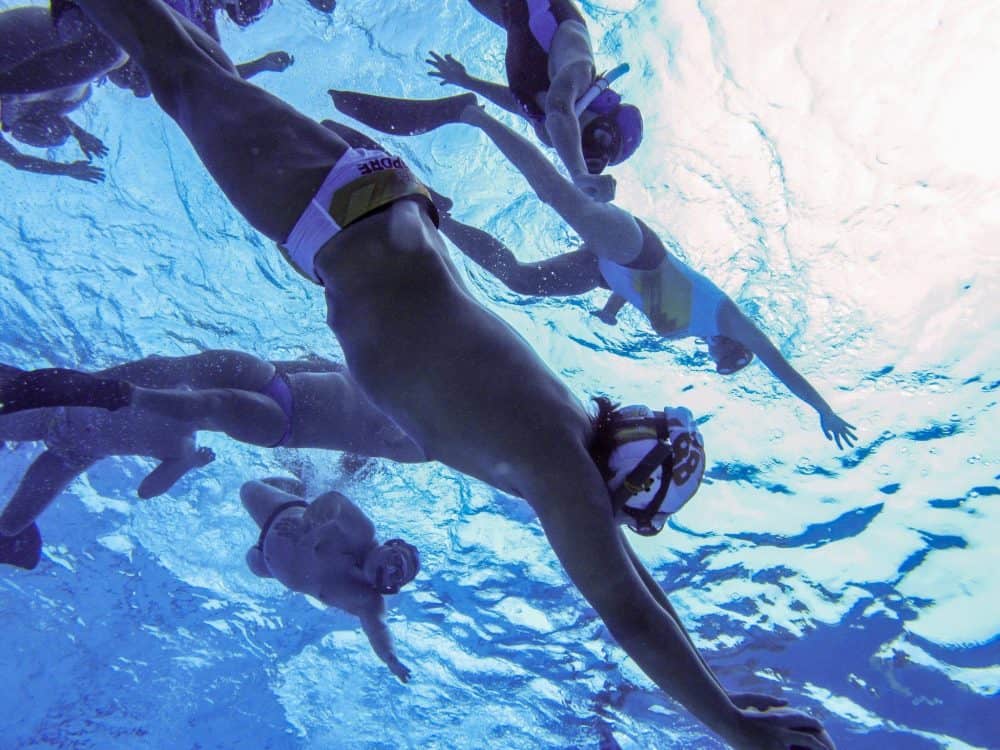 “It’s a six-a-side game where the objective of each team is to score a goal with a weighted plastic ball that is filled with salt water. Steel baskets located at the bottom of each side of the pool act as the targets. So you have to get the ball into the opposing basket to score a goal,” explained Genevieve, a club member who has played the game for almost a year.

Each player is equipped with snorkels and masks to aid with vision and breathing, while fins help to propel them underwater as they tussle for the ball.

“You can actually pass the ball forwards, upwards, downwards and score from any direction,” she enthused. Each team consists of forwards whose job is to intercept play, backs who patrol the defense while scoring goals and goalies who guard over the baskets.

Like rugby, it is a contact sport. However, players cannot attack the face, rip off masks or pull any of the opponent’s equipment as that constitutes a foul.

FATUWR is the brainchild of Khee Chia How, a business developer in the marine industry who has played the sport for about 10 years now.

“I started in Australia in 2008 when I was doing my undergrad at the University of New South Wales in Sydney. Afterwards, I had an opportunity to go to Norway where I played for different clubs in the local leagues there as well as in Sweden. That’s where my passion for the sport grew. When I came back to Singapore 7 years ago, there were no clubs in Singapore or this region of Asia.”

“No one had heard of Underwater Rugby. So I saw that as an opportunity to start something in Singapore.” 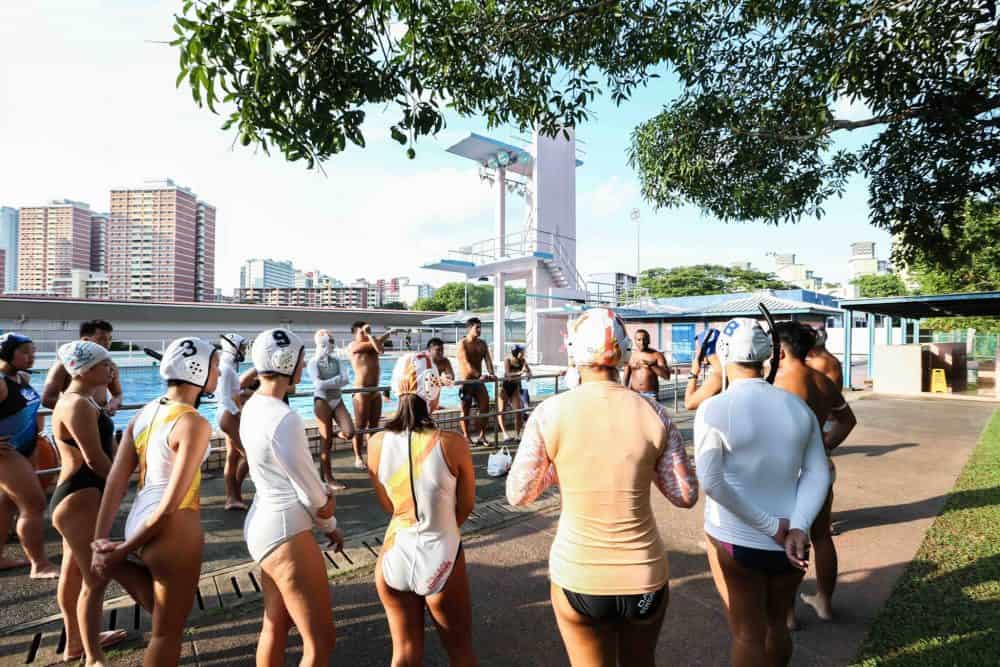 Initially, it was difficult for Khee as underwater rugby was such an alien concept and no one knew how to play it. In 2014, he held his first full booking session which drew in 20 people who were curious enough to try their hand at the game.

Within a year, FATUWR grew to around 80 people. They have continued to expand and diversify ever since.

“The aim was to formalise Underwater Rugby as a legitimate sport in Singapore. We want  people to know that we are serious, with proper procedures set up and proper management. These are the fundamental steps to starting a club.”

Despite being relatively new, FATUWR has attracted a lot of attention since the club’s inception, and they are now one of the clubs leading the spread across the region.

Khee credits the club success to an open and inclusive culture that they’ve adopted from his time in Scandinavia, along with the expertise that was gleaned from there.

“Every year, we will also pull in resources and try to invite international players to come to Singapore and run training camps, conducted by all these players. We’ve had top players from Colombia, Norway and even Sweden coming to us,” Khee said. 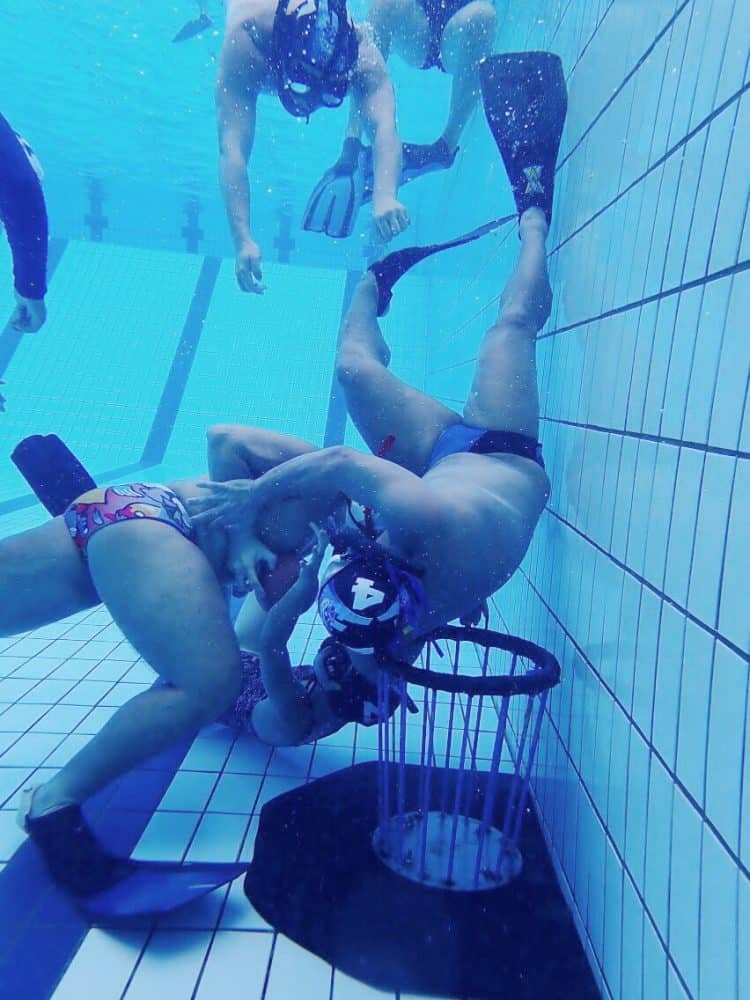 This exposure has allowed the club to send their group of players on overseas camps as well. This year, FATUWR is sending the girls team to Greece for a training camp there and another team to Sweden to give them the opportunity to learn more about the sport.

Khee concedes that FATUWR is still an amateur club. While underwater rugby is not yet recognised by the Singapore National Olympic Council, he finds that it is still important to run the club professionally in every way so that they are viewed seriously in the future by such organisations.

For Rei-En, what’s interesting about the sport is that you are not able to communicate with your teammates – at least verbally.

“It’s really different when you’re underwater. There’s definitely some chemistry that needs to be built. The game is multi-dimensional and can go in many directions so you really need to understand how your teammates play to communicate with them non-verbally.”

Often described as a 3D sport, an underwater rugby pool can go as deep as between 3 to 5 metres.

“Normal land sports are limited by a flat surface, but here you’re in such deep pool that you can pass up and down so you really need to focus and look where your teammates are; where to pass the ball to. You have to look everywhere,” Rei-En shares.

She likens the game to Quidditch, the wizarding game from Harry Potter. Similar to the fictional sport, underwater rugby is also not bounded by it’s physical environment.

“When you first start playing you would be caught trying to stay upright. But you can actually play upside down, swim backwards and in all directions so it’s mind-bending in a way,” she added, laughing. 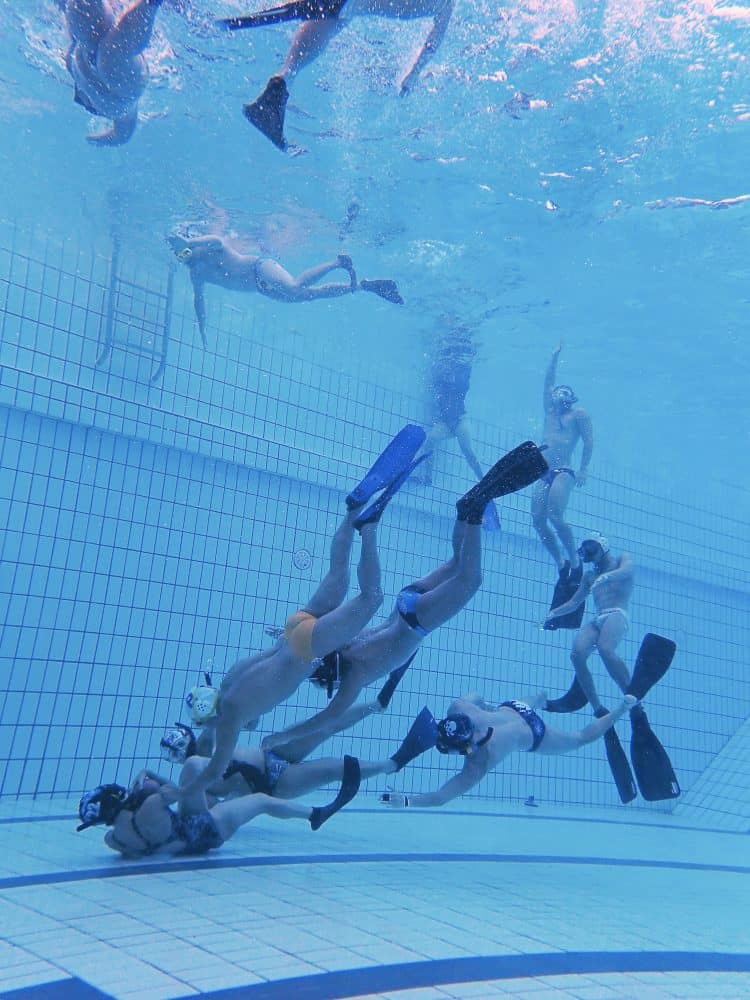 For Genevieve, it’s all about team chemistry and trusting the game plan beforehand. “Before we start the game we get together as a team to discuss strategy. But once you’re underwater, everything almost happens telepathically.”

Sher Jie, a relative newcomer and recent club member, recalls his first introduction to underwater rugby as a terrifying one.

“You see people scrambling and trying to wrestle for the ball but the senior players do take care of us, ensuring that we have the confidence and that it is safe for us to try it out. The most difficult part was the breathing and learning to purge out the water, to go down and assist your teammates.”

While most would think that it is important to be able to hold your breath, the sport actually promotes quick exchanges. You are not expected to hold your breath for a long time, but to do quick dives to take maximum advantage of your presence underwater.

Sher Jie has credited underwater rugby to improving his confidence as a swimmer. Among their club demographics, not everyone has a swimming background nor does everyone know how to swim. In fact, most learn it through playing the sport. 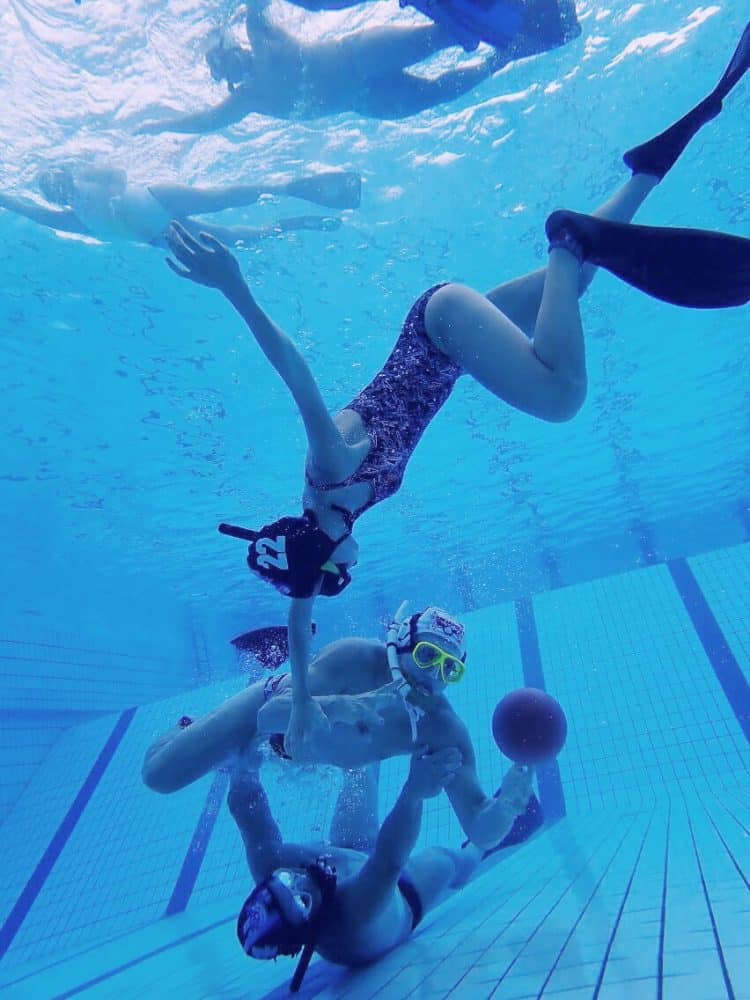 “With rugby people think of impact and danger, but we are totally opposite of that,” assured Khee.

“You will realise that it’s actually about relaxation, quick exchanges of air and a high amount of strategy involved in the game. It’s almost like a chess game. Before you start, you should know what moves you want to make.”

Another common misconception that Rei-En finds is the huge and hulking image required to play underwater rugby. In reality, it focuses more on technique and how you use your body.

This year, the FATUWR team is competing at the Champions Cup in November in Berlin, a prestigious event which is the second highest level of competition an underwater rugby club can play at. 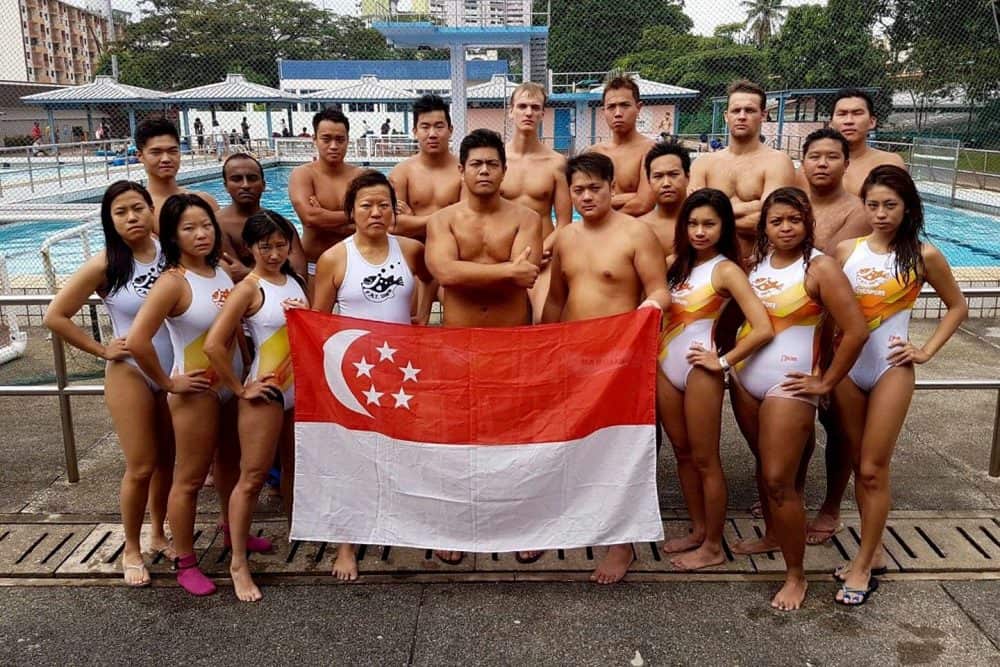 Rei-En is excited as it is her first time representing the club and Singapore on the world map. “That in itself is a victory for us, a huge honour. From starting out as just wanting to play underwater rugby to being able to represent the country, that is something irreplaceable and we’re so proud of!”

A Club That Lasts

As the club’s founder, Khee says that winning championships and taking part in tournaments is not the most crucial thing for them.

“We’re not so hungry for accolades or athletic excellence. What we want is to grow a community and create something special.”

Khee wants the club to last long after he is gone and for underwater rugby to continue to flourish. “We want the club and sport to still exist in the next 50 years and beyond. This is where people can come together as a family to enjoy the game.” 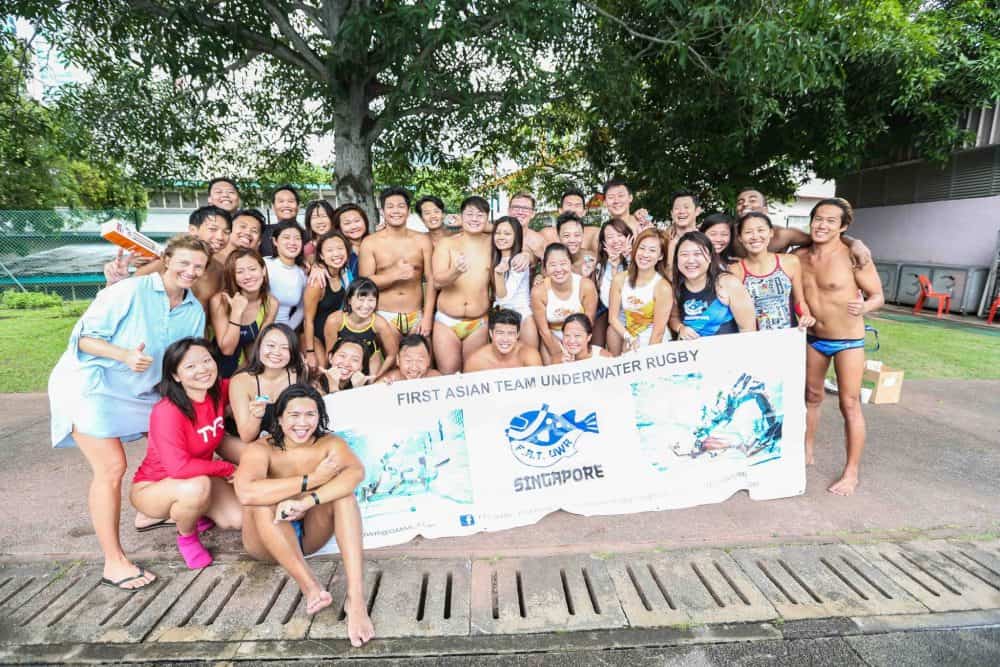 Rei-En believes the club embodies a culture that encourages and believes that anybody can play this sport. “We don’t have any criteria as to who can join us. We have an equal number of guys and girls,” Rei-En continued, “Our youngest player is only 16 years old while the eldest is 50 years old.”

Khee smiled, “We are a community and not just a sports club per se.”

Lessons & Love For The Sport

Rei-En believes that underwater rugby is a mental sport. “We learn to be positive and have mental fortitude.  That is something that I embrace and look forward to. I count the days to training, because there’s nothing like it elsewhere!”

For Genevieve, playing helps her take away the stress from her work. “Once you enter the pool you forget everything. I like that it’s a social club. You get to meet a lot of people of all races and nationalities.”

“A bad day at underwater rugby beats a good day at work,” she adds. 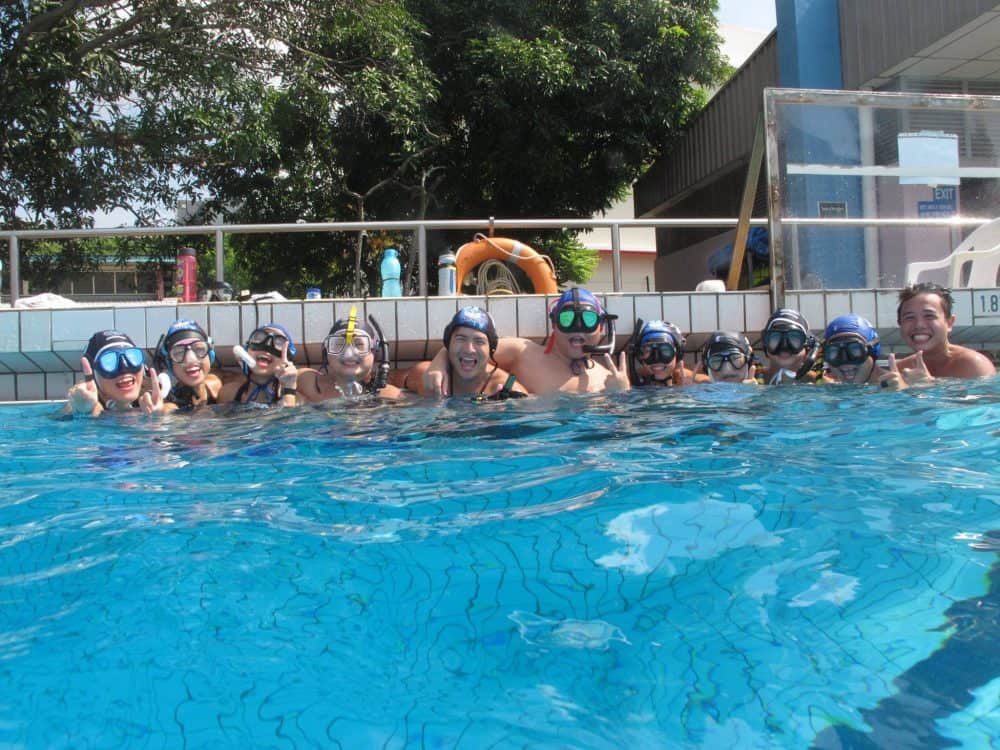 Sher Jie feels that everyone’s passion rubs off on him. “Most of my friends think it’s quite cool as they have not heard of this sport. But I always encourage them to just come and try, you’ll never know if you’d might enjoy it.”

Khee added, “At the end of the day, people come here to have fun. But you’ll never know how greatly you can be part of someone’s lives. For example, we have two players who just got engaged recently. Yes, they met through this club. We were there for their engagement and it was so amazing. I was moved.”

“We are not just a sports club but a family. We have this opportunity to touch people’s lives and unexpectedly, people are helping you grow. The things we do changes us as well so the impact is really humbling.”

Check them out here, here and here.