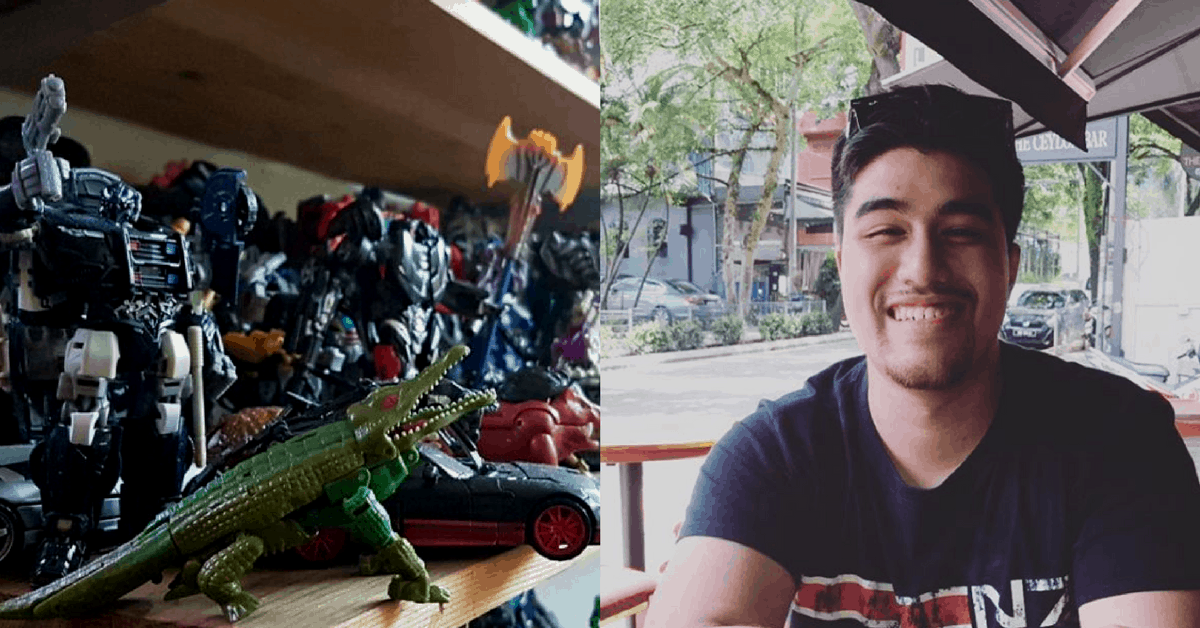 If ever there was a person who most resembled his hobby, it would be Kyle Ong – an individual who promises, like the subject of his passion, that there is more to him than meets the eye.

For a penchant that one would perceive as simple and delightful as toys, the forces that drive toy collectors today are both riveting and unhealthy alike.

The industry’s key players, Mattel, Takara Tommy, Bandai, Hasbro and Lego (to name a few) are well aware of these collector habits, responding with almost formulaic aesthetic decisions and price increments to feed – and milk a hungry consumer market dry.

The joy that collecting brings 22-year-old Kyle is true testament to the extents of his passion, if a toy collection worth at least $25,000 isn’t enough evidence for you.

Maintaining the desire for a collection amidst a social and university life is no mean feat, and you’ll soon see why.

Before we get down to business, it’s important to know that toy collecting is very different compared to casual toy buying.

Kyle, who’s an avid fan of the Transformers series, started collecting them since he was 12. He had developed a fondness for the Transformers: Robots In Disguise animated series.

Collectors collect for numerous reasons: some “try to predict the market”, collecting as a form of stock to sell once a toy’s value has appreciated – typically after the release of a movie featuring the character.

To other collectors like Kyle, the hobby is an emotional one, driven by memory association, nostalgia and a clear fascination for the endless possible variations in toy design.

“I believe every figure has a place in my room or in my house, and it’s really amazing how they come up with some stuff!”

He actually looks googly-eyed as he says this.

It’s understandable why Kyle’s taken to collecting Transformers – the toys exhibit mechanics that allow them to transform between the forms of a vehicle and a gargantuan robot – and sometimes even more.

In Singapore, collecting burns a far bigger hole in your pocket than it would elsewhere – say, in the United States.

“It depends on what you’re collecting, but we’re always paying a premium compared to what they’re paying.”

He points out an average of $10-$20 increment to purchase a toy here.

“It’s very seldom that I meet someone my age who collects toys,” Kyle says, and I don’t need to guess why.

The hobby demands at least a comfortable level of purchasing power, given that a single toy or figurine from a popular series can set you back anywhere between $30 to $150 – this is just for toys that are small enough to fit in one hand.

Some of the massive, knee-high Transformers toys that Kyle has stand at a range of the $250s, if you get a good bargain.

As with all forms of collection, this hobby materializes differently over a spectrum of people, though the mentality behind accumulating anything can always be considered healthy or unhealthy.

“For the first Transformers movie, I know I collected every single character that appeared on the screen,” Kyle says, explaining how he feels a need to complete a set.

I find the reality of his statement jolting, mainly because of how this just seems like a series of very expensive decisions that lack much emotional attachment.

I suppose it’s like wanting to own a complete DVD collection of The Office (or any other show of your preference) to just one season’s disk.

Kyle tells me he plays with all his toys, mainly because the Transformers toys offer more than the usual limb articulation.

So even though he takes trips to Japan “just to buy toys,” he considers himself a six (out of 10) on a scale of how dedicated collectors are to their art.

“For me, a 10 would be that guy who buys just every release by the crate, even if he doesn’t like it,” he says, though he admits that he used to question his ability to not be the same if he had a full-time job.

I started collecting transformers when I was 12 and until today people still keep asking me why I 'waste' so much money on them, the way I see it is that when I buy a transformer, I'm purchasing 2 different toys, sometimes 3 or 6 or even 10 occasionally cause of the many forms transformers have. I know many don't get the concept of collecting, but I believe that sometimes it's better to spend on something you can keep for a Long time rather than stuff that can be consumed in a few minutes. That's why I created this account to archive and just further enrich my joy of collecting 😁 Feat: @takaratomytoys Calibur Optimus Prime #optimusprime #takara #takaratomy #transformers #thelastknight #autobots

The furthest it has gone for Kyle is when he estimates how much he needs for toys at the start of the month and stiffens on other expenses to make way for his hobby.

He’s far from his official mark of debilitation, which he says is when “it becomes a chore.. you’re here already, and you just wanna finish the job”.

“I know people who just take it out of the box and put it back inside.”

Kyle describes the feeling of collecting as one that brings him immense joy. Every toy is memorabilia, something he believes deserves a place in his room because they each have their own emotional value, “like how I saved for it, or if it was my first one of the line.. everything to me has a story and I like to keep that kind of story.”

Compulsion or not, toy retailers and brands have had enough of a market to get away with slipping up on reasonable pricing and design.

Toys today are no match for their predecessors, which offered much higher levels of engagement, mainly through the use of electronics. 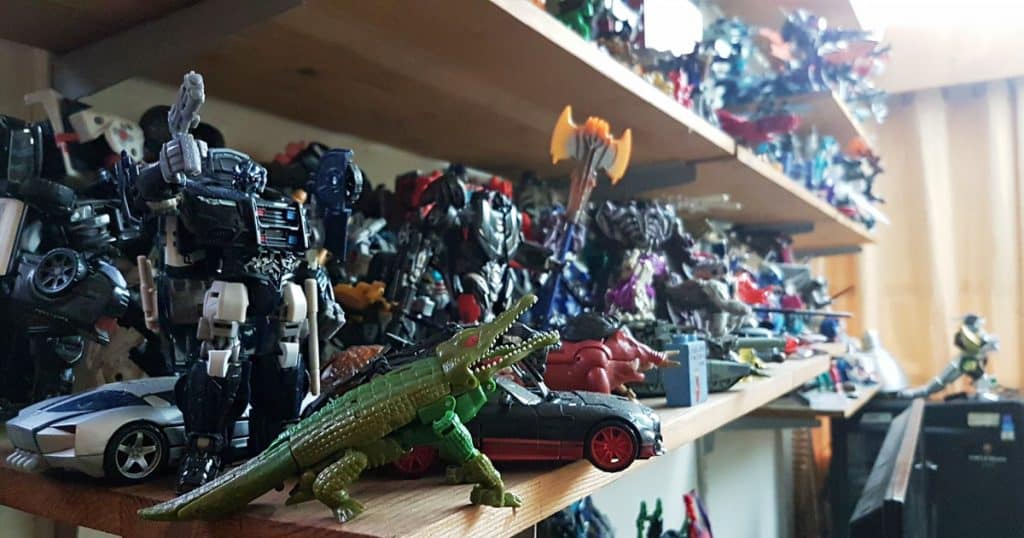 Kyle tells me that major toy releases happen almost monthly now, at much higher prices than when he was a child –  the good ol’ days when “you could only find toys from certain movies when the movie was hot.”

Today, you wouldn’t have to go rummaging for a popular DC or Marvel character’s toy or figurine.

It’s no doubt that manufacturers are exerting full steam on production to feed the collectors’ mentality, many of whom seek pose-ability over playability, likely a by-product of the desire to complete sets.

The price hikes have also required that collectors pay for the popularity of a toy, rather than quality.

Kyle believes the toy industry is just as ruthless and demanding as the fashion industry, quoting the example of a new “Anti-Social Social Club” cap. “That cap is about $200, sia.”

“My parents have always been kept in the dark about my spending,” he says with a guilty chuckle. At this point, I get queasy trying to laugh with him.

In a fashion brand collectors’ equivalent, I surmise Kyle’s colossal collection would equate to wardrobes of designer-wear.

For a 22-year old with an average spending power (he saves and works for all his toys), that’s both impressive and downright terrifying, especially from the perspective of a parent.

The Circle Of Inanimate Life

Given today’s superhero and giant robots-filled blockbuster climate, it’s hard to imagine that the culture of toys may be dying out. But the truth is, the fundamental purpose of this plastic passion has circled around the block a fair few times.

“When toys first started selling, all toys were a novelty,” Kyle clarifies regarding the origins of this seemingly mainstream product.

While playthings for children have already existed, toys—as we know them today—were the product of a far more sophisticated evolution route that has led to this current monolithic branding exercise.

Where it was once sufficient to simply place a big, red ’S’ on a doll and label the box “Superman,” the growing affluence of the audience now demands more.

These include increasing points of articulation, detailed similarities in features to actors/adaptations, and even accessories for collectors to display their favourite characters in iconic poses.

However, this demand may be backfiring.

“Quality of toys have declined,” laments Kyle, “Transformations are getting more simple, you lose out on aspects like articulation.”

With collectors’ demands becoming increasingly expensive to match, many mainstream manufacturers have decided on creating new lines featuring simpler products that appeal to the wider array of younger fans.

Some have even settled on reducing their catalogue to these simpler versions while outsourcing the more niche, novelty collectibles to third party developers.

However,  Kyle believes there may be a silver-lining in this cloud: “It might be a good thing for kids. I never really caught onto Transformers when I was younger because I found it too complicated.”

Before we part ways, I pose Kyle with the true test of self-judgment: would he advocate that his child embody his actions?

He agrees with a conviction that tells me he’s thought about this before, though he insists that his child must have a collection that is separate from his. “You’re probably gonna break most of my stuff!”

It’s clear the young collector has found joy and marvel in his hobby, clearly hoping to share his delirium with many to come.

“It would be great if collecting became more popular. Whenever I see a kid pick up a Transformer, I think about how I don’t want this lifestyle to ever die.”

Kyle feels that collectors play a significant role in any fandom. With near encyclopedic knowledge of the subject matter they are fans of, they hold the potential to help newer or more casual fans navigate the often complex world of collecting.

“The collector’s psychology is just about knowing your stuff, not showing off,” he affirms.

Kyle doesn’t even mind the increasing “ridiculous” lack of complexity in his toys if a younger, pioneering generation gets to enjoy them the way he does.

“I never want it to be small scale. Without kids collecting, there are never going to be more collectors, he says.

It is quite the sacrifice, and i’m hard-pressed thinking about another form of material accumulation that demands such selfless passion.

To children, toys are magic at its simplest form, and what more could every adult want than to remain young?

The next time you’re in a store, don’t resist the urge to push a button or two… maybe your visits to the toy store will become habitual – though Kyle recommends always price-checking on Carousell first.