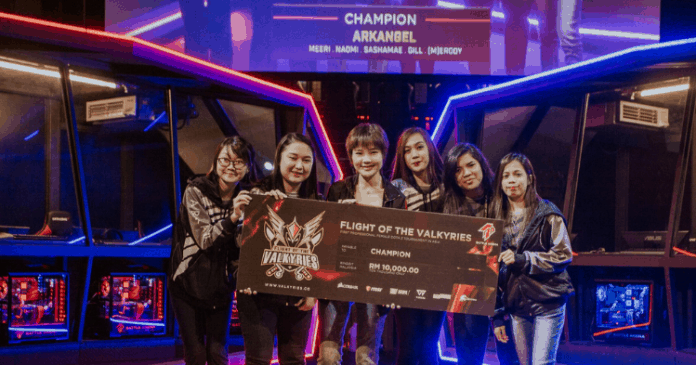 Mention that you like esports, and you will probably get a disapproving look or two. It seems like for esports, there’s really no in-between: you either follow religiously or barely know enough to string three sentences with esports buzzwords and jargon.

Mention that you want to pursue a career in esports, and people will probably scoff, or stare in blank-faced Pikachu surprise when you show them the multi-million dollar prize pools or the stadiums filled with people as they watch the best of the best duke it out on a computer screen.

No aspiring professional player will find it easy to start a professional gaming career. However, is it possible to stack the odds against oneself even higher? Well, try being a woman.

Tay Hui Chun, 22, also known as [M]erody, is an aspiring DOTA 2 professional player, and currently a scholar at the National University of Singapore. I met her on a sunny weekday afternoon and we exchanged a lax handshake as she struggled to hold back her cough.

Hui Chun was feeling under the weather, but once we got started, it was crystal clear that she possessed a fiery passion for the game and a professional career.

Our conversation began with Hui Chun’s latest accomplishment – a triumph in a Southeast Asian and Chinese offline tournament, the female-only Flight of the Valkyries held in Malaysia.

A total of eight teams from across the region participated, and Hui Chun attended as the only Singaporean in her team, ArkAngel. They battled against all-Singaporean squad Asterisk* in the finals as she prevailed against her former teammates.

Hui Chun quipped: “They had marshals there to guide us at the airport! It made us feel like world-class professional players!”

However, the situation is not all roses. Hui Chun took me right to the beginning, back to where her competitive interest sparked – right at home, at SCOGA’s Lion City Esports Cup.

Ever since her boyfriend introduced Defense of the Ancients (DotA) to her, Hui Chun had been playing it casually. However, she took part in the Cup with her friends on a whim which ignited the blaze of competition within her.

“Lubby [a former professional Singaporean player] trashed our team really badly, and I felt really angry because I wanted to win,” Hui Chun said. “But my team didn’t give a crap about winning. So, I needed a more dedicated team.”

After seeking for alternative solutions, she entered the most famous female team in Singapore, Asterisk*, which was soon crowned champions of Season Five of the Female Esports League.

Despite their championship, cracks were showing in the team. They would lose to male teams when joining qualifiers, and other female teams such as TNC Amazons.

At that point, Hui Chun was one of the lower ranked individuals within the team and felt that she was being unfairly blamed for many of the team’s problems.

“I didn’t feel happy playing with them, so I decided to leave and grind on my own.”

Hui Chun quickly achieved leaderboard status within a year, and with the solo experience came opportunities. Hui Chun built a rapport with a Filipino player that she met online.

Recognising Hui Chun’s talent, the Filipino player brought her into a team and they started looking for sponsors. They formed under the team ArkAngel, a prominent multi-esports organisation in the Philippines.

“It has a big building to cater to these players, and they will have rooms dedicated to each team. There’s even a cafeteria for the players to eat!” Hui Chun beamed.

She then revealed that she had to sneak out to the competition without letting her parents know.

“Why are you going overseas for some gaming competition?” Hui Chun put on her best parental impression. “I didn’t tell her, but I already predicted what she was going to say.”

The Flipside of the Coin

Honestly, what she was describing was  foreign world to me. I am an avid DOTA 2 player, but I have never fathomed travelling overseas for a tournament. I told her that, and she chuckled.

Sure, it was an experience not many players would have, but it wasn’t all glamour either. In the end, female-only tournaments came with their own set of problems.

Apparently, “piloting” is a massive issue within the female esports community. Piloting is when another player – usually a more skilled one – takes another’s place, pretending to be the original person in the cockpit.

Of course, this would be a problem regardless of gender, but it is taken to pervasive heights in female competitions.

On one side of the coin, anti-piloting measures such as filming oneself while playing the qualifiers and requiring said videos to be submitted are in place.

On the flip side, the constant scrutiny of a female player is fundamentally intrusive. There is also the underlying doubt which appears when one plays well – can somebody this good be a woman?

Admittedly, Hui Chun acknowledges that a male friend taking over a female has occurred before, even to her own team.

“[One of our teammates’] boyfriend actually messaged us saying that it wasn’t her playing, but a 7k* player taking over for her,” Hui Chun lamented. “That’s why it’s required for [organisers] to have anti-piloting stuff.”

*A 7k player would rank around the top 500 players in a region.

However, she constantly runs into discrimination while playing games still, whether in a competitive or casual setting.

“I only use my mic when winning. Some idiots when they hear my voice, they will ask ‘can you talk again’ and they won’t be focused on the game, and we will lose.” Hui Chun said with a note of irritation.

“Or they will say ‘hey, you’re a girl, stop asking your boyfriend to boost your account’. It’s just the same few remarks.”

She sighs, resigned to her fate, mentioning how she has become immune to them. Despite the constant obstacles, she remains impassioned about her potential career choice.

As fate would have it, her zeal for video games extended to technology, which led her to take up a scholarship at NUS.

“At the end of the day, even if I don’t have a career in esports, I already have a backup plan, which is my main role as a software engineer.” Hui Chun explained. “But of course, when the time comes and I have opportunities to compete abroad, why not? I feel really satisfied and happy when I play.”

Most wouldn’t think of a stable, potentially high paying job in the tech sector as a backup plan, but Hui Chun sees it alternatively. Historically, an esports player career starts in the late teens and rarely extends beyond the age of 30. There really is no time like now.

Hui Chun adds, “It’s kind of ironic to say that DOTA motivates me to study. I know my future’s important, but at the same time, I know I want to be one of the best players.”

Hui Chun reveals that her goal is to enter the male-dominated world of esports. At present, the highest level of competitive esports, no matter the game, men reign supreme.

Despite her career beginning in female-only leagues, she believes that gender segregation only serves to widen the gap.

“Right now, there is no successful female player who has joined a male team, and that’s one of my goals. I want to be one of the top players.”