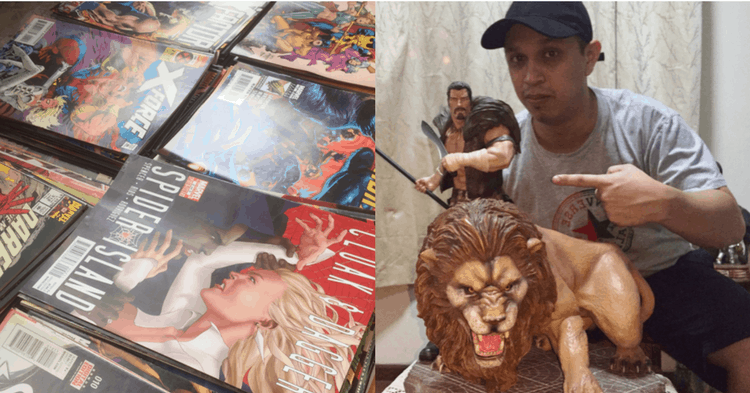 Bruce Boudeville is no humdrum man. His emoji-laced Instagram biography describes him to be a “Geek, husband .. a boy trapped in his own body .. who just loves to EAT”.

Behind his genial self-description, Bruce is a man with hardy perseverance, hoping to pilot the joy of passion into the hearts of Singaporeans. This, despite the fact that the subject of his ardour is a medium that is often wrongly perceived to be juvenile: comic books.

33-year-old, recently married Bruce is a fan of all things competitive – comics, soccer and board games – which of those he prefers the most is evident. He’s father to Reactor Comics, a comic book portal where fans can purchase comics with the promise of a transaction that’s personal like no other, something that the medium of comic books expedites.

This is his second attempt at a comic book business, his previous attempt, Atom Comics being one that was justly successful, till a bout of misfortune and bad public relations put a dampener on business. Reactor Comics makes a killer comeback; it’s bigger, badder and most cardinally, wiser.

The comic book world is a highly commercial one, with products angled toward collectors and readers of all ages. Reactor Comics caters to the market, offering a range of comics, from collector-loving cover Variants, to two-dollar comics for the interested layman, or the student.

At the moment, Bruce is looking for a location to set up a physical shop, though Reactor Comics has a strong presence online, amongst the comic book community, even holding auctions.

For Bruce, it all began with a “gigantic poster of the X-Men”, his first addition to his collection with Atom Comics. Not only did he love the X-Men, he also thought that the poster would have a “wow factor” to entice customers walking by.

Bruce’s previous comic book endeavour dwelled in the mall POMO, within a shop called Atomic Candy. Bruce was the comic book dealer of the shop, alongside a business partner who dealt with toys and collectibles. Photographs on Bruce’s social media accounts showcase the numerous exclusive comics that Bruce retailed, as well as customers engaging in geeky interactions together.

It’s hard to miss the occasional sour comment, complaining of late toy orders. A supporting customer or two retort to say that toy orders were managed by a different person entirely – things that weren’t within Bruce’s control.

“Work with something you love and (you’ll) never work a day in your life.”

A cliche that Bruce quotes, but I suppose, applicably so. Comics were a medium that saw Bruce through childhood, adolescence and adulthood. Through it all, he’d always hoped for a chance to be a part of the industry. When the opportunity finally struck, he took it without hesitation.

I’m genuinely curious about how doubtless his choice was, given the fact that he was dealing with a niche medium, with minimal production from local talent nonetheless. Piquing a general interest was bound to prove a challenge, especially with competition from 4 other shops, one of which was Comics World.

The legendary Comics World stands to date, run by Mr. Bill Teoh local celebrity and comic book connoisseur who has been around since the 70s.

The only comic book chain Singapore has seen in recent times was by Absolute Comics, which had been reduced to a single stall. Competition was minimal, but rife because of a reduced playing field.

Confidence is visibly Bruce’s strong suit, saying he “really didn’t think of it as being competitive or difficult”. And so he declared an ‘all-in,’ wanting “to be in this industry through the ups and downs in Singapore”.

What Makes You, You?

Ultimately, the real reason for his conviction was in his yearning to share his passion.

In times spurred by social media, individuality doesn’t ever really feel lonely. If anything, an uncommon passion simulates a sense of belonging or popularity within a community. Many feel the need to keep the tropes of their individuality from becoming mainstream.

With Bruce, it’s quite the contrary.

He started shop “so that everyone would know that comics are fun, easy, and the stories are good”. For all of his simplicity, he still makes the medium sound almost like a reverie.

“I feel like it’s an escape from the world sometimes. Read about a superhero, and you’ll end up doing the same – helping others.”

The New Age of Brick and Mortar Comics

Implementing his experience from Atom Comics, Bruce tells me that Reactor Comics is using the opportunity to place an increased reliance on social media, online platforms and pop-up stores. “Atom Comics was a comic shop, whereas Reactor Comics is a comic business,” he says.

Reactor Comics is a little bit of an experiment, primarily to test whether not having a brick and mortar stall can still bring the same amount of joy that picking a comic off a shelf would bring. This is likely the reason why Bruce makes it a point to meet every single customer, to maintain some level of a physical presence.

Atom evidently touched the hearts of its customers – daily game sessions at the shop were a frequent occurrence. It’s likely this will serve a branding point to Reactor Comics too, with Bruce’s secret of “talk, talk, talk, talk!”
There’s nothing a customer wants more than to not feel like a customer, and it’s a desire that Bruce’s character satisfies. He makes it a point to speak with customers, sharing his thoughts and “truly treating them with respect and understanding them”.

This way, he gains valuable insights on their likes and dislikes, and also allows customers to trust their product retailer. Trust is especially important in the industry, where brands and product originality are crucial, and a fresh market Variant can cost you anywhere from seven dollars to hundreds of dollars.

“They are your friends .. like-minded geeks like you and me .. a way to build the community again,” Bruce says, jovially. He’s got a valid point, everyone’s somewhat geeky about something, whether you’re a movie geek, a perfume geek or an arcade geek.

Bruce is a Marvel fan, so he prefers to describe his community as “The Avengers”. There’s no particular demographic that frequents his shop, and no majority either. It’s clear the medium of his product doesn’t require a particular interest.

Not into superheroes? Pick something else up, like a “Walking Dead” comic instead, or “Starboy,” a Marvel comic based on hit R&B singer, The Weeknd. Even if you aren’t much of a reader, comics possess some of the most diverse storytelling methods.

“That’s the good thing about comics, it doesn’t matter who you are, but there will always be a Batman, X-Men or Spider-Man story to talk about and share!”

In actuality, the people that frequent Reactor Comics are luckier versions of you and I. They’re like-minded people who have found a comfortable community to engage in healthy debates with, something that not all of us have the liberty of doing.

More than anything, Bruce wishes to impart knowledge and creativity to younger generations to come. “Rather than mixing around with bad company, comics allow (youth) to get interested in stories and healthy reading.”

Though business may have once been reliant on a niche crowd, comics are gradually on their way to world dominance, spurred by a slew of superhero movies inciting the interest of a mass audience. Bruce explains that “the movies have helped many businesses, not just the comic shops.”

Through the course of my conversation with Bruce, it’s clear that preconceived notions and judgment on comic book readers are outdated and hasty. Ultimately, the genre is one that will strike you differently at whatever phase you are in your life.

More than just pictures and words, it is the amalgamation of the two that gives for groundbreaking storytelling, with no compromises on quality or maturity of writing.

“It’s very worthwhile, even if it’s a bunch of two-dollar comics… One of those stories will hit you on a personal note”.

Bruce’s passion is both understandable, and admirable in his willingness to share. If you ever meet Bruce or another comic book reader, understand that they’re more than just “geeks”, husbands, or wives who love to eat, or in this instance – read.

If you ever decide step into their world, open your mind to the world ethereal storytelling and possibly even hope for humanity, enough to make for fictional characters as worthy role models.

“Pick up a comic now or later, but when you do, it’s a life-changing hobby…. I swear it.”