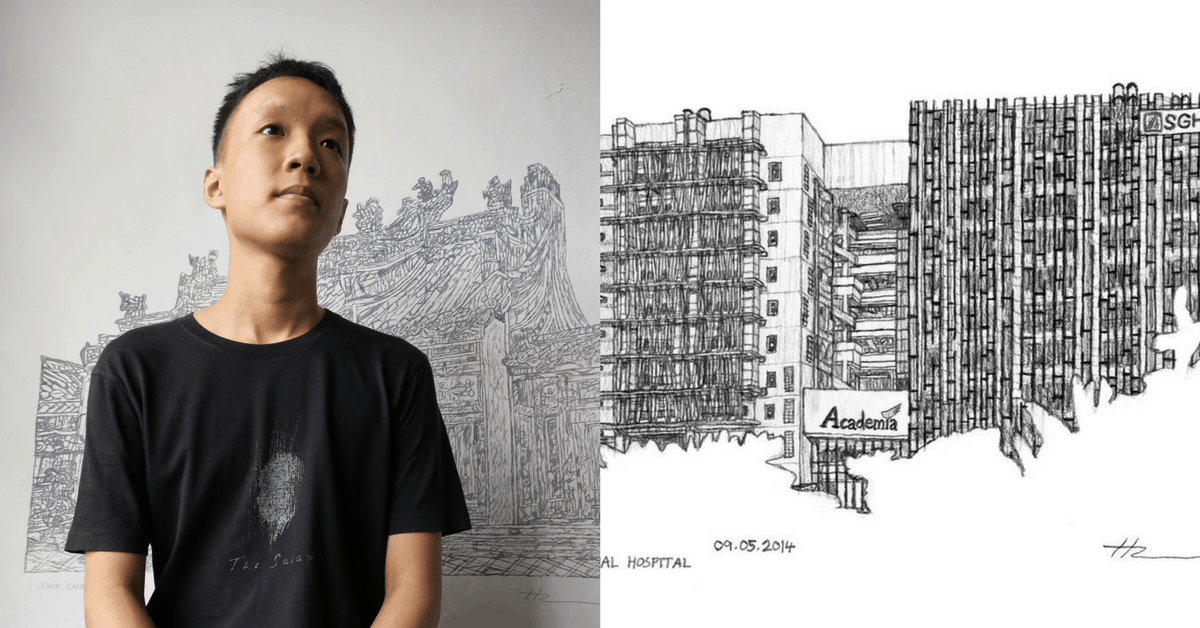 We’re all familiar with superheroes with exceptional abilities – they can fly, possess extraordinary strength and shoot webs. Yet, the human equivalent of these superheroes exist too.

Known as savants, these humans have capabilities far beyond the average person.

Perhaps one of the most iconic movies featuring savants is Rain Man in 1988, where Dustin Hoffman plays the main character – an autistic savant. In one scene, he’s counts the number of toothpicks spilled onto the floor almost instantaneously.

According to Big Think, there are approximately only 70 people in the world who have been identified with savant syndrome thus far.  It occurs either through an injury which causes brain damage or through a disorder, such as autism.

One such autistic savant is Daniel Tammet from Britain.

Tammet can recite pi to the 22,514th place and is able to converse in 10 different languages, two of which he made up himself. He can also mentally calculate complicated mathematical questions instantaneously.

Other than his savant skills, Tammet is also a synthete – he experiences numbers not only visually, but also as colours and geometric figures.

Closer to our little red dot, we also have individuals that display savant-like abilities. One of them is Hanzhen, who resides in Malaysia.

Hanzhen was diagnosed with Autistic Spectrum Disorder at the age of 2. Just like most parents, Hanzhen’s parents immediately immersed themselves into a frantic mission to “rescue” him, being unaware of his savant skills until much later.

Nevertheless, his mother says that they were intrigued by Hanzhen’s memory since he was young.

“I remember he could spell the word “Giraffe” after reading it from a book just once and he was only 2.5 years old – he could not even talk then. He spelled the word out with his soft-foam alphabets!”

According to his parents, Hanzhen’s growth development was so uneven, they knew that he could be special. He was slow when it came to various social skills, and yet he could outshine most of the kids in his age group in other aspects.

“He would be so obsessed with redrawing the whole story book of “Sesame Street” that he would be on it for hours without food or rest till he finishes. That was at an age where a normal kid could not even draw a straight line.”

It was only when the couple stumbled upon some articles about savants skills – especially on Stephen Wiltshire – did they realise that there’s one right in their home. Stephen Wiltshire is a British savant who can draw panoramic cityscapes from memory perfectly.

According to Hanzhen, his other skills include playing the piano and mathematics.

“I remember maps and calendar dates.”

His mother says that his piano skills are derived from a good memory rather than from hearing. It’s the same for drawing – Hanzhen’s drawings are so detailed as he can remember what he sees. He captures more from one look at a picture or scene than most of us.

Growing Up With Autism 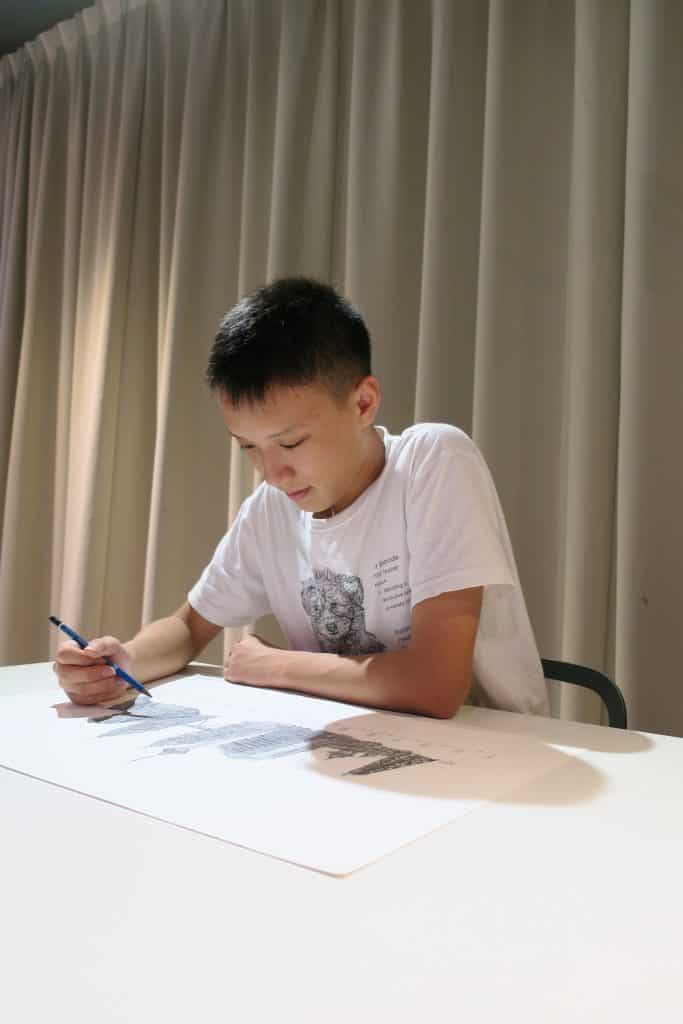 Hanzhen’s mother says that he falls into the category of what one would describe as classic autistic spectrum disorder – there’s no cure, and only a negative prognosis.

“We still struggle till now, with all the autistic traits on a daily basis. It is not easy. But what we have been able to achieve with Hanzhen is beyond words – it overshadows all the autistic disabilities that he has.”

Hanzhen did not speak recognisable words till he was three-and-a-half years old. His first word was not “mama” or “dada”. It was “nat too tui”, which meant “one two three”.

This happened while he was playing a game with his father and brother, throwing and catching many small coloured balls.

“He loved the colours and the quantity of the balls – the repetition of colours and sameness of shapes excited him. So excited was he that the words came pouring out!”

From then on, Hanzhen’s parents used his liking for repetition as a tool to help him – rather than a disadvantage, they view it as an advantage that he has.

Hanzhen’s art is an extension of the same concept, as this repetition is turned to an advantage.

He sees the minute details of the objects, remembers them and enjoys sketching each and every detail of the objects. He catalogues all his sketches in a systematic order, via running numbers.

He is also able to recall when he drew each of the sketches and how long he took to draw for each one.

The Start Of His Career

Hanzhen’s first drawing is what he calls “The Butterfly”. 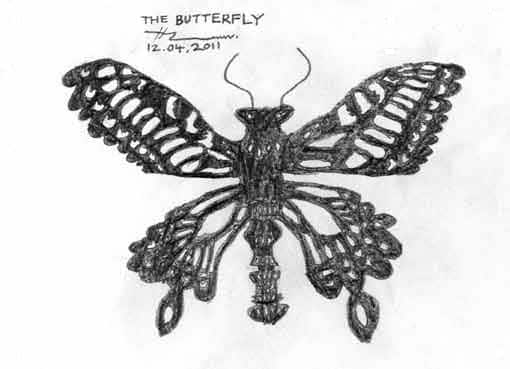 His mother says that this is his first professional drawing, which also signifies the beginning of his artistic career.

“Of course, he has always been drawing since he could hold a pencil. He drew on school textbooks and scribbled all over the walls!”

She recalls how he “decorated” the school library books, filling them up with sketches. She had to painstakingly search for and purchase those books to replace them.

When I ask about Hanzhen’s favourite drawing to date, he states that it’s Endangered Animals. His mother seems surprised at his answer.

“It’s interesting that he could pin it down to one drawing, as he has drawn 1141 drawings to-date. I’m not estimating – Hanzhen knows for sure that is the number of drawings he has drawn.”

On average, Hanzhen takes about one week to finish drawings of a building, although it depends. For drawings of animals, it’s a lot faster.

Since then Hanzhen has published five sketch books in a series called “Sketches By Hanzhen”, which is currently available in MPH and all leading bookstores in Malaysia and Singapore.

Other than that, he has also held various exhibitions globally.

Come 2018, there will also be the release of an art film – a story about the life of three autistic artists from different countries in Asia – where Hanzhen is featured as one of the main actors.

He says that his biggest achievements thus far are his art commissions for Shell Malaysia (for their 125th anniversary), Doubletree Hilton Hotel in Johor Bahru, and the Singapore High Commission in Kuala Lumpur.

Hanzhen’s mother adds that leading two public walks to raise awareness for autism, one of which involved reading aloud a speech on stage, were also amongst the events which gave him the most gratification.

Among all the exhibitions he’s had so far, Hanzhen’s favourites include his Tokyo and Kuching exhibition.

The Tokyo experience holds a special place in his heart as it was the first time that he participated in an international competition, where he won a prize too.

His sketch of the historical Cheng Hoon Teng Temple in Melaka was one of the winning entries in the Asia ParaArt Tokyo 2013 competition, which earned him a spot in a travelling exhibition to various airport locations in Japan together with other Asian artists.

Besides drawing, Hanzhen also spends time to develop his talent in music  – he recently obtained his Associated Board of the Royal Schools of Music (ABRSM) Grade 8 in piano.

He also received the Excellence Performance Award with The Cornerstone at the AnAn International Musical Talent Gala held in Hong Kong.

When I ask Hanzhen about his future aspirations, he says that he wants to be an artist and a musician. Having achieved this much at his age, I’m sure that he’s capable of attaining his dreams soon.

While many would say that Hanzhen’s abilities are a “god-given gift”, Hanzhen’s parents beg to differ.

They say that Hanzhen has worked very hard to get to where he is. In fact, his autistic behavioural trait is his driving force – he practices often and will not stop till he gets it right.

They add that because of a highly routined characteristic, autistic individuals almost always excel in any pastime that they enjoy doing.

“Hanzhen sketches and plays the piano every day without fail. How can he not excel?”