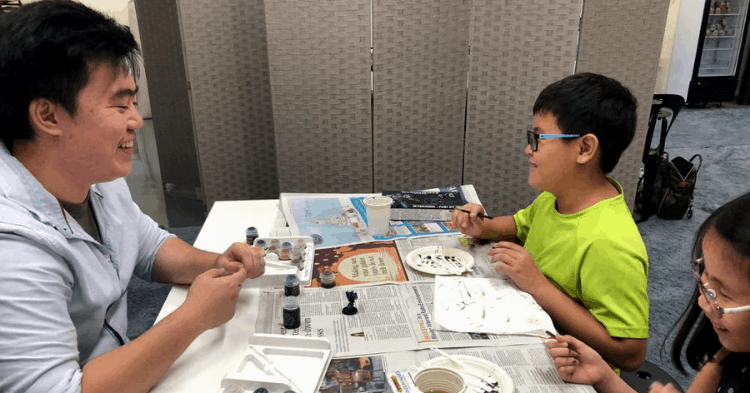 “I’m a natural gamer, I have been gaming since I was three years old.” Shaun said with a hearty chuckle.

This confession might come as a surprise to individuals who only knew Shaun for his role as an educational therapist. However, gaming was not an unfamiliar term to the students and parents he regularly interacted with—in fact, games are an indispensable part of the lessons taught in Swords & Stationery.

Back in 2015, Swords & Stationery was an interest blog that discussed the benefits of using games in education.

Within just a few years’ time, Shaun built it up and provided it with a real, physical life of its own. By April 2017, Swords & Stationery was the world’s first specialist tuition programme that incorporates gaming into education and helps children with specific learning difficulties, or special needs.

Swords & Stationery was inspired by the teaching Shaun had done when he was working at the Dyslexia Association of Singapore (DAS).

“Gamification itself is not a new concept, and it has risen in popularity recently especially in the last 4 to 5 years,” Shaun explained.

However, the success stories seen in overseas case studies, such as the achievements of psychologist Dr. Megan Connell, were more focused on the social, behavioural and emotional aspects of individuals. Shawn wanted to figure out if games could improve not just these aspects of a child’s well-being, but also his or her academic achievements.

This was especially so as he realized that many dyslexics were “very visual learners”.

Dyslexia, according to the DAS, is characterized by an individual’s difficulty in “language learning and cognition”. While it involves mainly difficulties in language-related skills, one might also have problems in physical coordination and mental concentration.

Thus, children who are diagnosed with dyslexia may have a hard time understanding and learning how to read and write, especially in classroom settings where they are made to focus for hours at a time. The usage of games, with their interactive storylines, could thus appeal to them rather than merely using words on paper.

It was a unique move that had never been attempted at DAS before, but when Shaun tried it out among his dyslexic students, it was a resounding success.

“It piqued the interest of a lot of students, many of them whom couldn’t even focus in class and took 10 minutes just to write their name. They would actually start to write more on their own after gaming,” Shaun said.

He had also witnessed evidence of character and moral development, just like the ones seen in therapy sessions overseas. For example, one of his students decided not to fight when faced with a verbal confrontation with other youths. He had remembered the messages that Shaun had taught the children through gaming, one of which was that “violence is not the answer to everything”.

Later, Shaun took a bold risk. He left his job at DAS, and started Swords & Stationery not just for dyslexics, but also children with other learning difficulties such as attention deficit hyperactivity disorder (ADHD) and autism.

Swords & Stationery was a combination of Shaun’s interest in gaming and his professional career as an educational therapist. Nevertheless, his entrepreneurial journey was as tough as anyone else’s.

Shaun admitted that there was a risky period of time when things didn’t go as planned financially, and there was the need to create a delicate balance between several factors. While he planned to reach out to as many children as possible, Shaun had to ensure that this was balanced with the resources he had. Coupled with this was his challenge of hiring suitable staff members.

As a result, he often had to spend large amounts of time conceptualizing lesson plans and teaching methods on his own. Most of his students were taught in groups, but even then, each student’s learning ability was different. Shaun ensured that his teaching methods were personalized and specifically catered to every student’s needs.

Most of all, Shaun had the tricky task of ensuring that his teaching was not just aligned with the latest school syllabuses, but also had games incorporated into them. To elaborate on how he has achieved this, he introduced me to the world of role-playing games such as Dungeons & Dragons.

“One thing about role-playing games is that they follow the Shakespearean structure of drama, the five act structure, which follows the Story Mountain framework that’s taught in schools when you think about it.”

Due to these similarities, Shaun would often create an entirely new story arc for a game, and involve the students as the main characters. As the students experienced the game through their characters’ points of view, they would, in turn, learn how to structure a story well. The stories from these role-playing games would be typed out in simplified terms, and the students would then write it again in their own words.

Often, Shaun would also use these games to teach the students vocabulary. These were the same things that teachers would have taught in school based on the latest syllabuses from the Ministry of Education.

Other than incorporating games, Shaun also created his own comprehension passages and cloze passages for students. These passages were carefully written with changes in style, paragraphing and vocabulary used depending on the student’s abilities.

Swords & Stationery places a significant emphasis on academics, but Shaun believes that academic results and a child’s holistic development should always go hand in hand.

“I do the best job I can and closely communicate with the parents…not just about the academics but also the child’s behaviour and the way the child acts in school, and offer guidance and solutions,” he explained.

When he was invited to the Scholastic Family Literacy Day this year, Shaun was given the chance to showcase one of his students’ artistic talents, and he gladly did so. He developed a simple role-playing game, Venture & Vanquish, for children and parents who attended the event, and his student illustrated the game for him.

Shaun is also a strong advocate of creating awareness about bullying. The effects of bullying are traumatic for the child, and this is unfortunately a widespread problem that children with specific learning difficulties had to face.

He reasoned that by creating awareness, individuals within a community would be able to realize “what it means to be different from one another”. To do so, a safe environment should be created for the children to interact, and guidance should be offered to them to practice empathy and self-regulation.

The Fun Things In Life

While Shaun admitted that this is often easier said than done, his future plans for Swords & Stationery were in fact the epitome of his ideals. Other than growing the branding of the company locally and abroad, he also wanted to create “a healthy gaming community” where children would be able to play and learn without being ostracized. To do so, Swords & Stationery also hosts occasional gaming events that are open to the public.

Other than games, Shaun has also incorporated other activities to create more fun in learning for his students. One of such was the Mentorship Programme, where he hoped to bring students on free excursion trips to expose them to the world. He had also tried miniature model painting and has witnessed its positive effects on his students.

Most of them were able to concentrate and paint for consecutive periods of time, even those whom were often more distracted in class. Aiming to pursue a master’s degree in Applied Psychology soon, Shaun hopes that he could write a paper about this someday.

Overall, Shaun’s plans and goals could be encapsulated by one key message. As he said so himself, he hoped to develop Swords & Stationery “not just for the sake of it, but to make a point in a competitive, meritocratic society like Singapore that you can actually learn, and be an achiever, without losing your interest in the fun things in life”.

To find out more about Swords & Stationery, visit their website here.