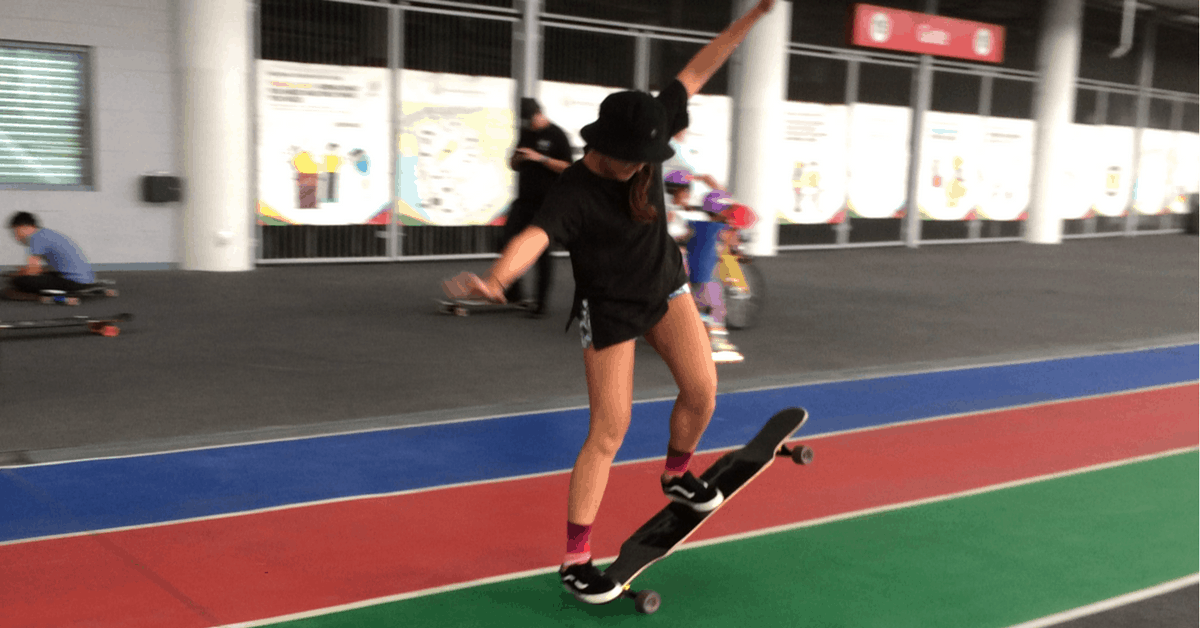 The Longboard – the skateboard’s more chilled out, indie older brother. He’s wider and almost double in length of his little bro the skateboard; a design specifically made for smoother cruising at high speeds over long distances.

He loves long cruises on the beach, is great at slow dances, is physically and more emotionally stable than his little bro and is bound to pick up a wispy haired surfer when the waves are low – something they call, ‘riding the concrete waves maaan.’

He can certainly teach you how to be a pro in some areas of his expertise such as free ride, downhill, freestyle, and did I mention – dancing? Just to name a few. 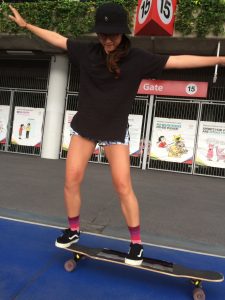 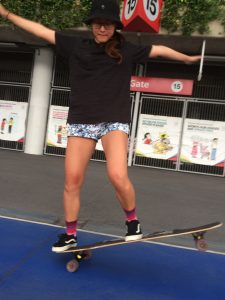 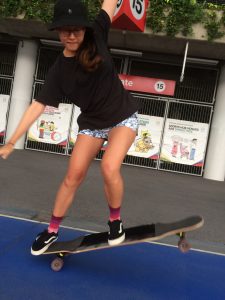 We spoke to Tabitha and Natalie from the Longboard Girls Crew Singapore (LGC SG) to find out more about sharing the ‘stoke’ of longboarding and becoming a badass on the board.

What is ‘stoke’? For those like myself, who have no wider skater vocabulary apart from the stereotypocal terms familiar to us from 80’s surfer movies like ‘knarly’, or ‘radical’ and every sentence ending with a dragged out ‘maaaaan’, I assumed that stoke meant the ‘coolness’ or ‘attraction’ of the sport.

I was clearly not ‘down with the kids’ and so Tabitha and Natalie spared me a thought and explained to me that stoke means, “ the addiction, the passion, the adrenaline. The thrill of skating!” 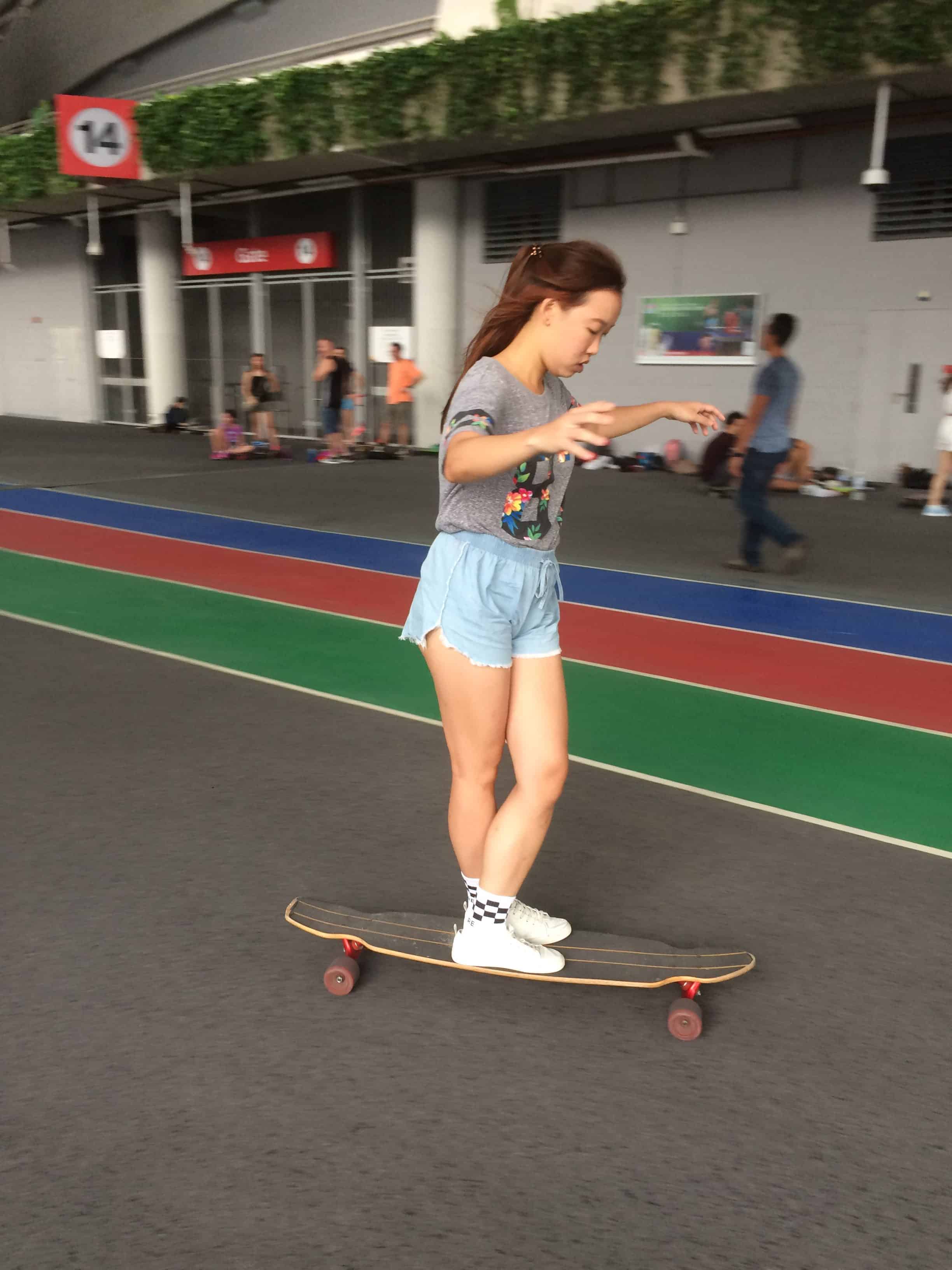 Since joining LGC SG, Tabitha and Natalie revelled in having a group of girls to share and spread that stoke with. During their early days longboarding, both girls mentioned that seeing another girl on the board was a rare sight.

It is a man’s world, with them often being the only girls to show up at a skate park.

They lost that euphoric free feeling that they sought out of skating – it was awkward; they felt like all eyes were scrutinising their every move and that they were being judged harder than anyone else in the park.

The LGC SG movement brought skate girls all around Singapore together, letting them know that there are other sisters out there who want to band together and skate. The girls empower each other to come out of their shells, push their boundaries and not be afraid to do so in a male dominated sport.

“Our role is to give the girl community a face, so that girls who are interested in the sport or are new to the sport and are unsure of how to start, can reach out to us for support.”

“We answer their questions, give advice and invite them out to crew sessions.” 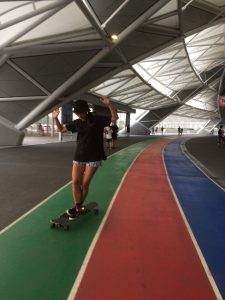 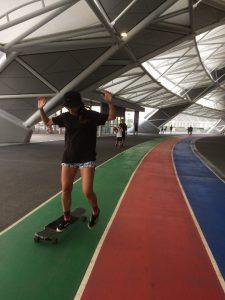 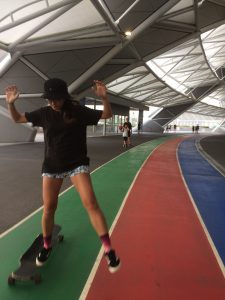 A “positive feedback” as Natalie terms it. “When you are part of a crew you are more willing to push yourself and become better and better at the sport”. And she does it for no one but herself.

She’s a badass girl on the board; strong and fearless got because she’s got the backing of her crew. She commands respect from herself and others around her too.

“If guys see an independent girl they respect that. I get random hollers from guys saying “wow that girl can skate”.”

Just in case you were wondering, the girls spare no thought to have to prove themselves to the guys just because they occupy a larger population of the sport. Frankly, they don’t care about that either.

“I don’t really care what people think, everyone has a different skating style. I push my own boundaries and I push myself to go further, I don’t think about having to prove myself to them” Natalie says. 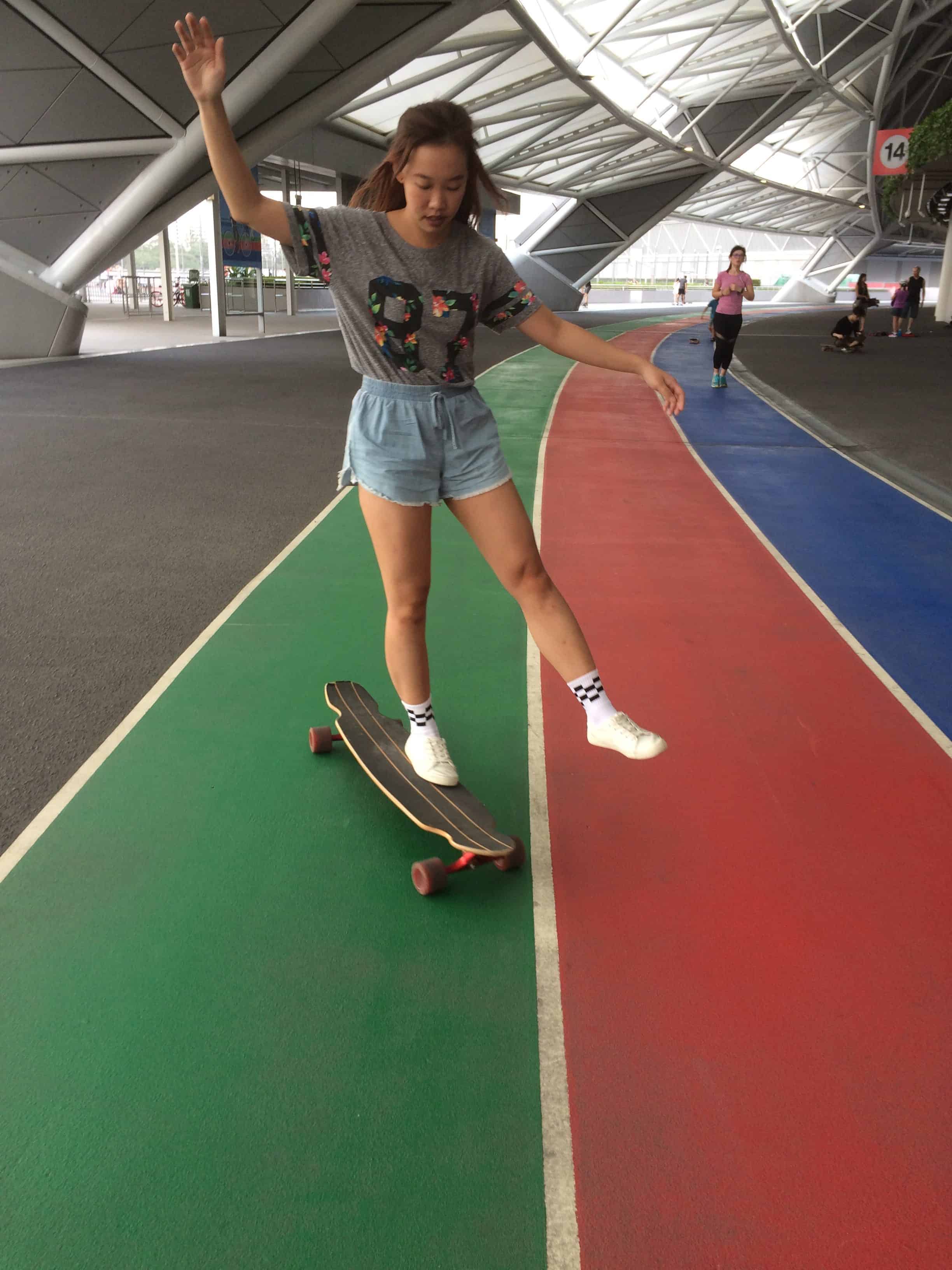 However, as with any male dominated activity, the idea of females gaining a presence and shifting the balances of power for (the testosterone overdosed) some is just – weird.

After speaking to some skater boys and cutting through a layer of political politeness like “ ummm….yea, sure. I guess it’s possible?” or “ughh….why not ?” and “I don’t know, I guess we’ll see?”, where their confidence in women was clearly…questionable, I learnt that they were just not used to seeing a girl take up the sport seriously.

It’s an unspoken thing but it’s certainly not an unnoticed thing. The lack of a female presence has engendered a mentality amongst most guys that, “girls are not so good or that girls are clumsier than guys”, or that they need to be taken care of.

Tabitha gives an example: “When we push ourselves to do more dangerous tricks, the guys will usually tell us to ‘be careful’ and not push us like they would other guys”.

In other words, they doubt that she will be able to complete the task or do it well. 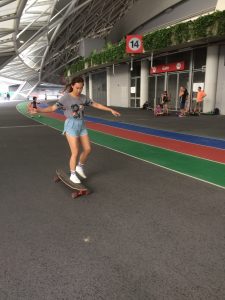 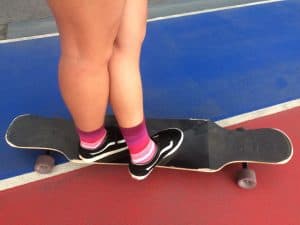 And so the girls aim to bring more women into the spotlight of skating. Both Tabitha and Natalie believe that, “the more women are being seen skating, the more it will change the lay man’s perspective that women are able to do these kinds of things. It influences them to change their perception of women in sports and of women in general”.

The girls mention Emily Pross, 2017’s Women’s World Champion Downhill skater, and 9th place contestant in the World’s Downhill Open Competition, making her the most decorated female in the sport and the highest-ranking female in the world for downhill.

“This is a remarkable achievement for the women’s community. Men are always perceived to be the best in downhill because it’s one of the most dangerous practices of the sport”, but women are quickly rising up the ranks and challenging that stereotype. 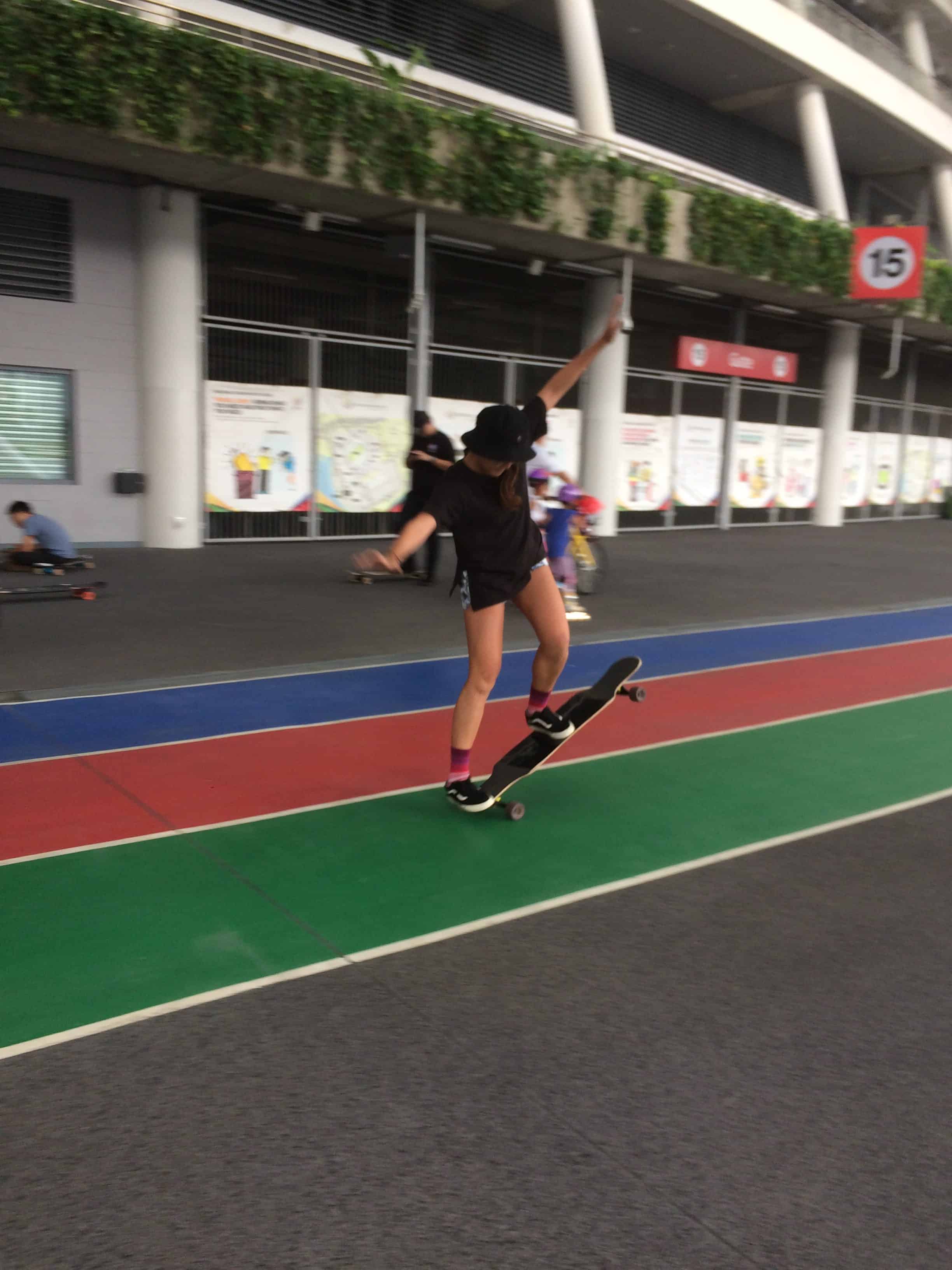 To sprinkle on the finishing touches to that cake – no stress and don’t mess with the girls, Tabitha and Natalie.

They aren’t afraid to prove you wrong with their abilities and can be sure to school you hard on the art of gracefully dancing on the longboard.

“If I can do something the guys cant then that’s definitely a bonus. Girl power!”

This sisterhood of the travelling longboard is about more than just sport, its about female empowerment, female athleticism, strength and unity against suppressive cultural norms.

You can follow the LGC SG on their Facebook page, and find out more about upcoming events and crew updates.