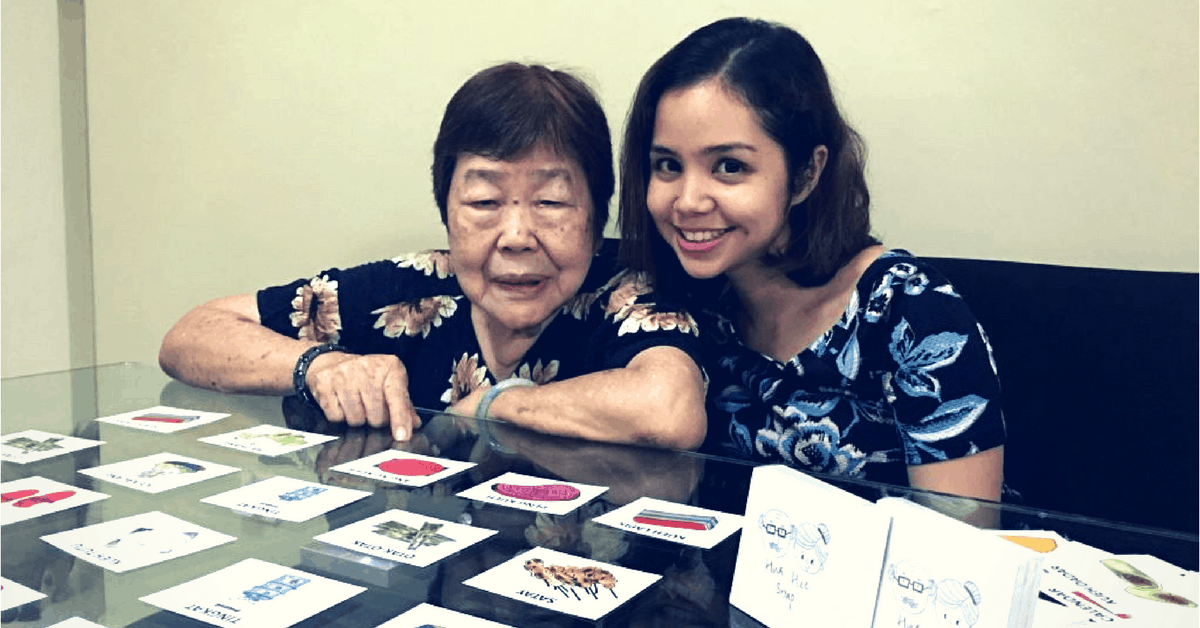 When dementia struck her grandfather, 27-year-old Christel Goh did not know what to do to help the situation. But since her grandfather’s passing, she’s set forth on a journey to make sure that the same disease doesn’t affect her grandmother and others alike.

Her solution? A simple, yet effective card game named Hua Hee. For the uninitiated, Hua Hee means “happy” in Hokkien – a sentiment she wants the elderly to have.

Playing the game is straightforward enough. Pocket-sized cards are designed with hand drawn motifs of symbols and pictures known best by the elderly, such as tingkats (tiffin carrier), kueh lapis, and otah otah.

The game is played in pairs or in groups.

We speak to Hua Hee’s creator Christel to find out the card games progress thus far, the benefits its shown, and what’s next in her quest to support Singapore’s silver generation. 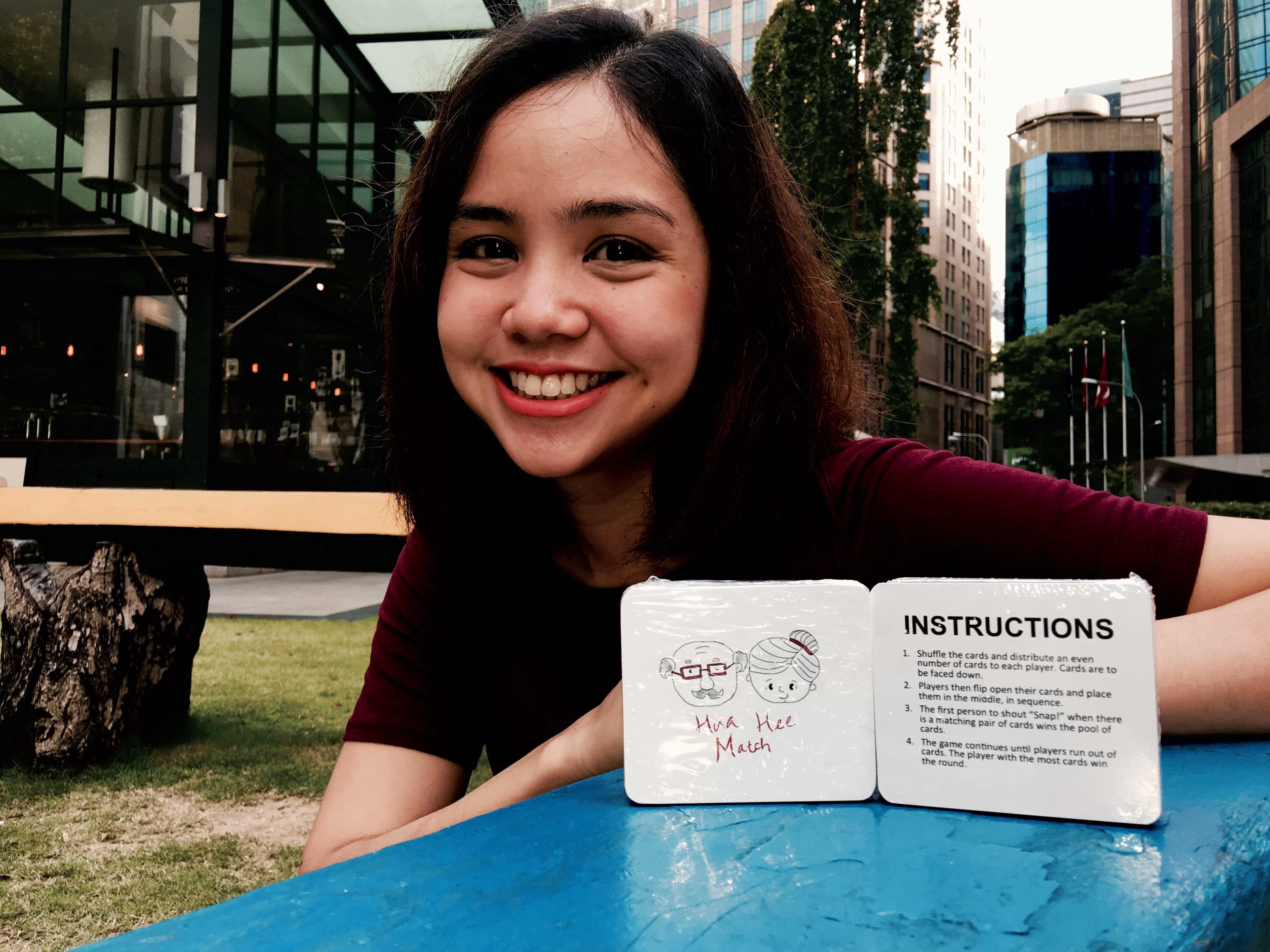 After first congratulating Christel on getting Hua Hee off the ground, I had to ask just exactly how the game prevents the effects of dementia for the elderly, considering that there’s no certified cure for the unwanted disease.

“Mainly, it’s played like a game of Snap! or matching cards, and by letting the elderly guess the order of which the cards were revealed, it helps train their memory. The card game also emphasizes family time so that the elderly won’t feel so left out at home, since this simple game is suited for all ages”.

“Many don’t really know what to do when their relatives or loved ones contract this illness and I hope Hua Hee is a start towards something, at least.”

So far, the game has proven effective to a large extent. By bringing the card games to community centres and old folks’ homes, Christel engaged curious participants in Hua Hee, much to their delight.

“Some of them respond quite fast and positively which is nice. But it’s a bit more challenging for those who suffer from severe dementia as their vision isn’t as strong and they can’t make out the drawings on the card. 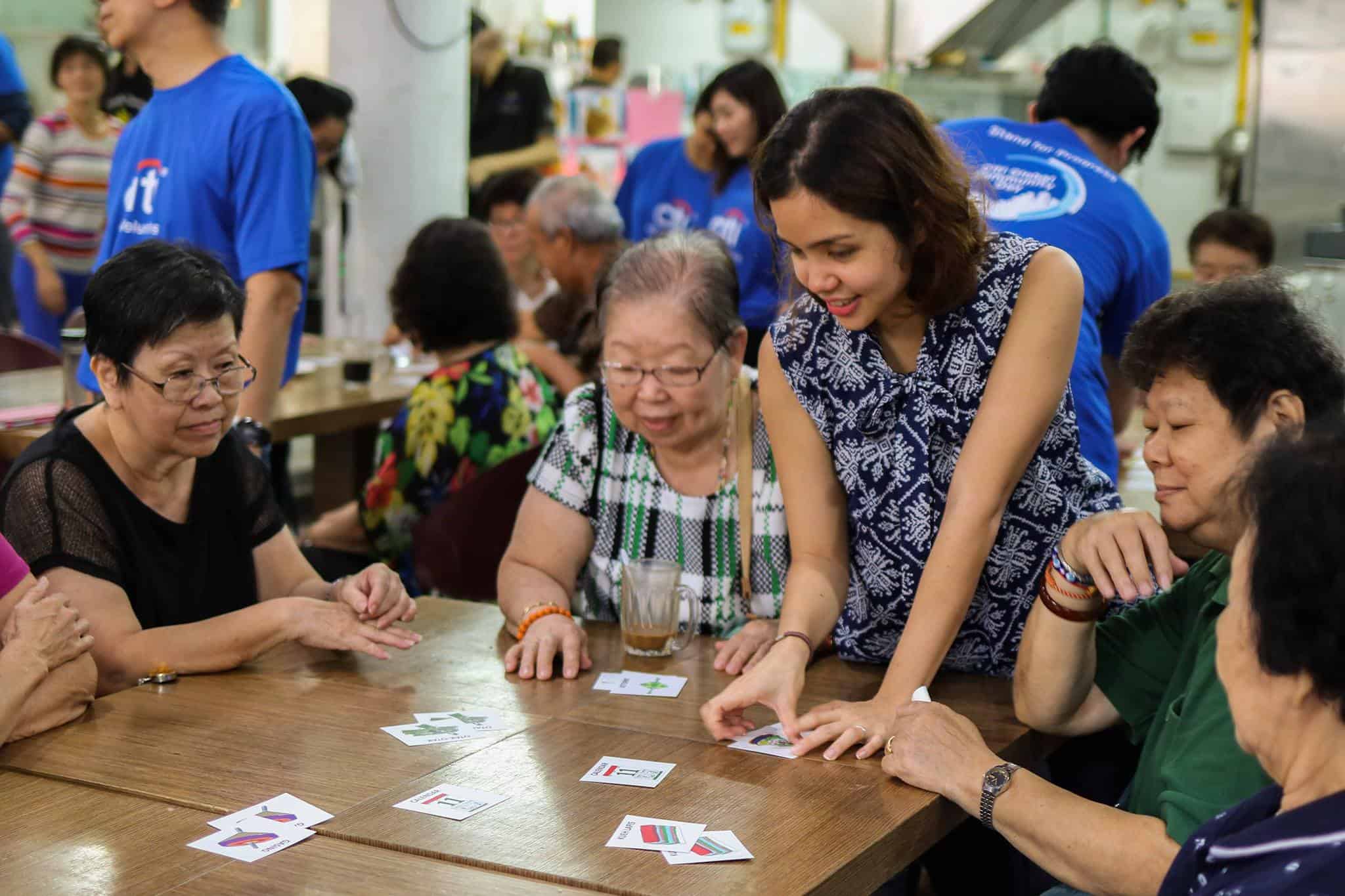 But the card game hasn’t only been received well by the older generation. Youths have also lent their support to her initiative.

A campaign on crowdfunding website IndieGogo for Hua Hee was met with an outpour of support from both Christel’s peers and the general public.

Even though it ultimately didn’t reach its target, she still went ahead with production for the card games on the strength of sheer faith that it could make a difference.

Local retailer Naiise has since stocked the product in their stores.

Speaking on her strategy of listing Hua Hee on IndieGogo, she says “I didn’t want to sell it by word-of-mouth or Carousell as the impact wouldn’t be as ideal. By building a campaign around it, it could reach the masses better and send its important message stronger.”

“Personally, I’ve seen how early intervention has improved my grandma’s memory, and I hope the same can be said for others!”

“I think people actually do see a need of these initiatives for the elderly, and while it’s not a 100% proven way to cure it, people are slowly seeing the positive effects”. 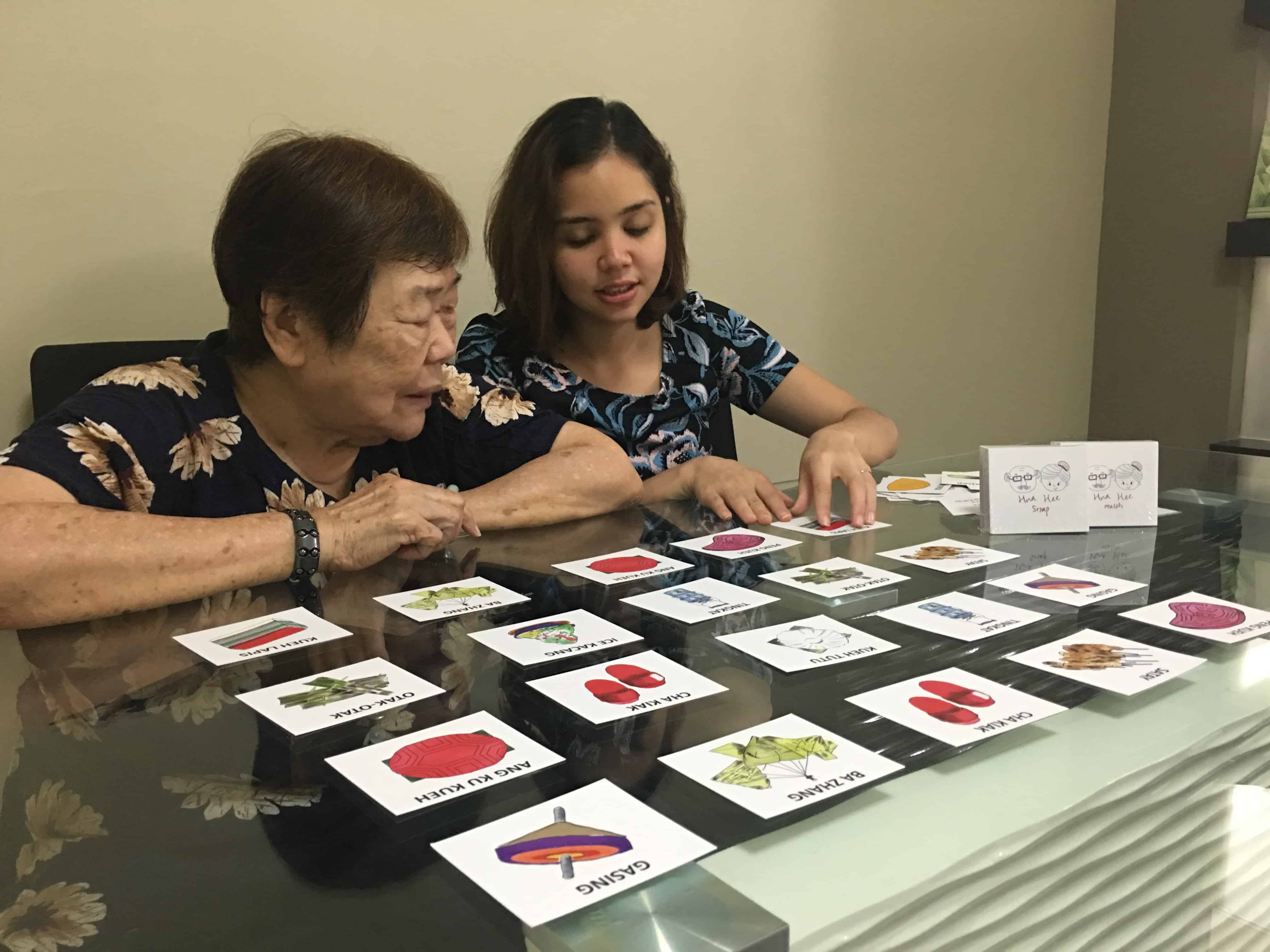 While Christel has seen progress in her grandmother, she notes that other factors have parts to play as well.

“We made a startling discovery during last Christmas. I treated my grandma to some popcorn as a one-off treat since it was the festive season. But I realised she finished the entire bag the next day, and started showing serious signs of memory loss and got angry and upset over misplacing her items”.

“I can’t say for sure that it was due to sugar. But seeing the effect almost instantly after her sugar intake was a cause for concern. Thankfully she’s back to normal now and we continuously try to find new ways to engage her to keep her mind active.”

Hua Hee And Beyond 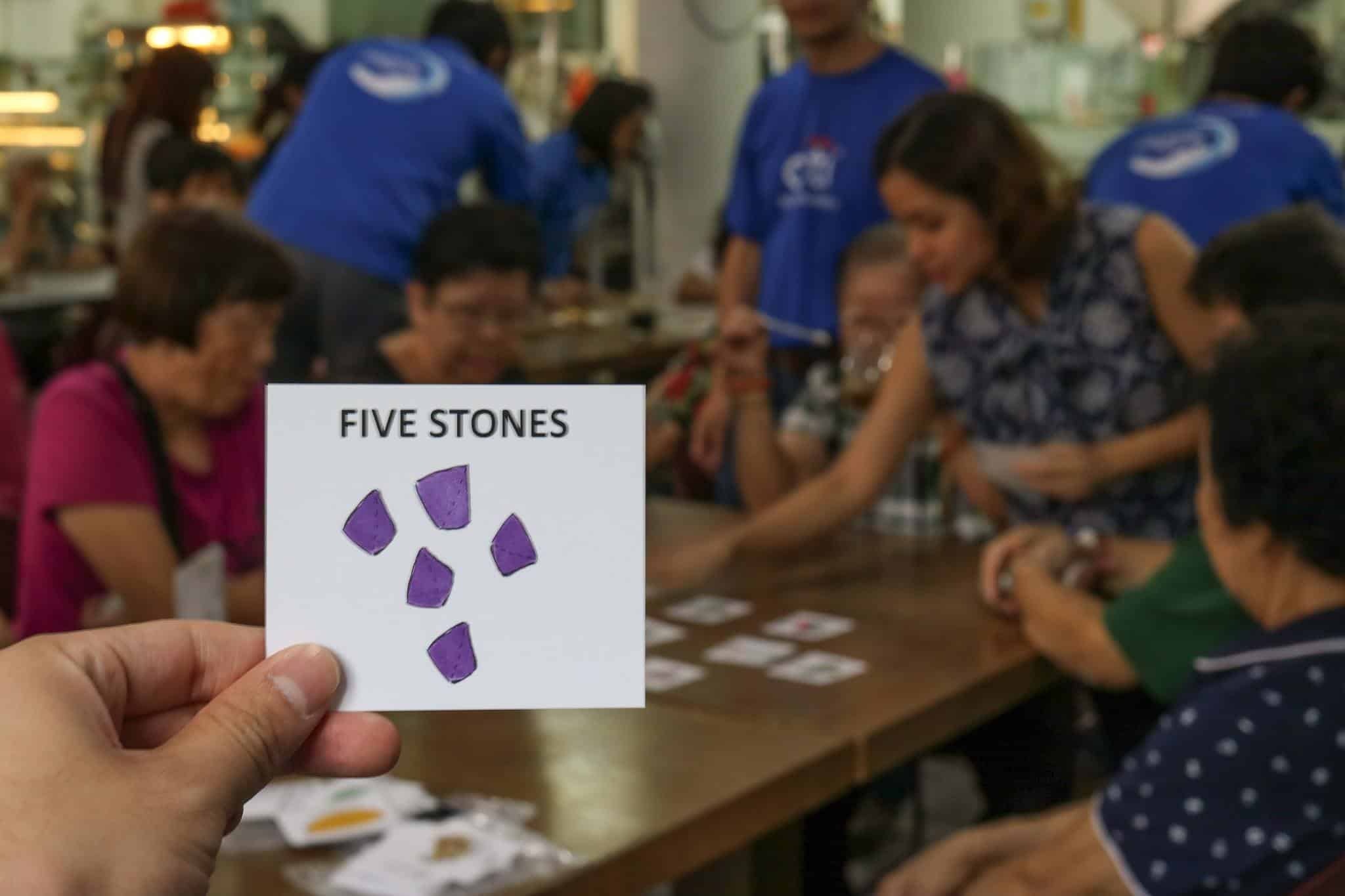 Things for Christel and Hua Hee are also looking up. She recently launched her website for Hua Hee which also includes a blog with her personal experiences on dealing with dementia in her family.

For 2018, she’s also looking at other financing models for Hua Hee to keep it sustainable. To start, she’s crafting out a version 2.0 of her card game, one that allows the cards to also be played as a game of Pictionary or Taboo.

She opines, “The elderly also have given feedback that they get bored over simply matching the cards. The challenge is finding new ways to evolve and keep them excited. I’m hopeful that we’ll achieve it this year”.

Christel ends off our conversation by providing some serious food for thought.

“Ultimately, it starts simply by just spending time with your grandparents. Hua Hee is just a tool to help you find something in common with them and put a smile on their faces. It’s the least that it can do.”

Learn more about Hua Hee at its website. You can also purchase Hua Hee from Naiise here.