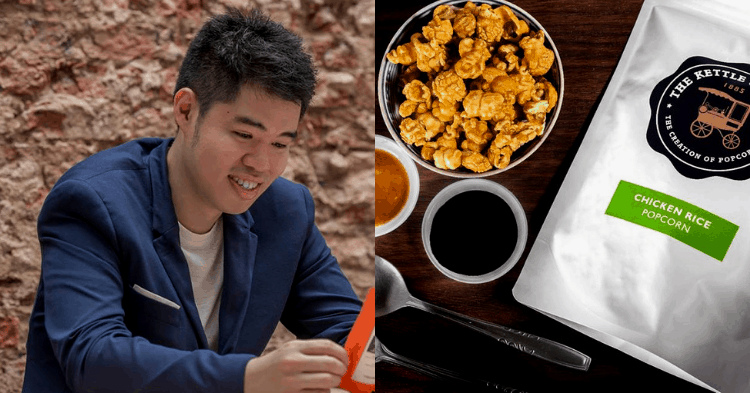 Which university graduate would plan to be known as “The Popcorn Guy”? A company that sells flavoured popcorn seems like an unconventional idea for aspiring entrepreneurs.

This was exactly the case with Zac Chua, the 27-year-old Founder and CEO of The Kettle Gourmet – Singapore’s thriving flavoured popcorn business.

When Zac first started, everyone thought that he was just fooling around. The general opinion was why would anyone “waste” their Singapore Management University (SMU) degree on a popcorn business.

“If you think about it, no one ever dreams of becoming a popcorn seller. I jumped straight in without a business plan.”

During his time as a Business Management student at SMU, Zac had lucrative offers from several investment banks but eventually he realized that he could never work for someone else. Last year in the month of July, he started The Kettle Gourmet by sheer accident.

A 7 dollar Sale & An Accidental Startup

“The Kettle Gourmet is an accidental startup that took off. We validated the idea at an event where we gave out free popcorn and created a single landing page for people to purchase,” explains Zac. He recalls the very first sale, which was an innocent online order worth only $7.

“When I saw the PayPal email notification I was shocked and thought wow I’m definitely on to something. I had no idea how this person heard of us but she’s one of the reasons why our company exists. Amazing how $7 can make or break a dream,” he beams.

After this, orders gradually started flowing in and before you know – The Kettle Gourmet was delivering to corporate pantries on a regular basis.

Zac shares that his biggest inspiration in his life thus far has been his late father.

“I had an awesome up-bringing where grades never mattered, and I had the autonomy to do and experiment with whatever I want,” he fondly remembers. The biggest lesson he learnt from his dad was the value of money and how hard they had to work just to make $1 back then.

“Till now it sticks to me and maybe that’s why I’m a prudent person who constantly watches my personal and business cash flow,” he adds.

Did Zac have any idea that he would be in the food business some day?

“Think ADHD meets gaming nerd. I was hyperactive and had a short attention span in class,” he confesses.

Zac tells me that he was never very interested in studies and loved playing computer games. While he may not have known that he would be a foodpreneur one day, he always knew that he had a lot more gamble in his blood than his peers.

“I took far greater risks and was never afraid of trying. However, if you told everyone around me then that this weird kid would become the CEO of a company everyone (including me) would laugh,” he says candidly.

His favorite snack growing up is the “Super ring snack”.  Almost every day after school, he would walk to the nearest mamashop to purchase one bag to devour in a few minutes.

Surprisingly, he wasn’t a fan of popcorn initially. “I only ate popcorn back then in cinemas – though I would finish the entire box before the movie started!”

For Zac, the past year has been a life changer. He has already collaborated with big brands though he prefers not to name them.

“We work with big brands because they help bring recognition and credibility to our brand when we first started. But we are not a fan of name throwing so we usually don’t use their names as marketing.”

As humble and sorted as he is, I still wonder how he handles all this success. “Honestly, a part of me still can’t believe that I’m the CEO and sole owner of this company. No one expected us to take off at this insane speed. I consider it a blessing but I’m only 1% done,” he says.

When it comes to the challenges that he has faced in his journey so far Zac explains them using three Ps – People, Product and Process.

“Hiring the right people and the high costs of labour is always a challenge. Also, when dealing with perishables, how much to produce is always an issue. I had no F&B background when I first started. We basically survived on a lot of common sense and slowly learnt the ropes as we grew,” he explains.

Currently, the Kettle Gourmet has no plans to move to a brick and mortar shop.

“At the rate our website is handling transactions, we’re as good as a brick and mortar shop with a short queue. We do however, have our popcorn available with partnering stores and cafes, and once in a while we have pop-up booths around Singapore,” he adds.

The Kettle Gourmet recently launched the Chicken Rice Popcorn, which – to my surprise – smells and tastes just like the dish. Along with the Teh Tarik popcorn, the Chicken Rice popcorn falls into the list of Zac’s favourite flavours.

He tells me that the original inspiration for Singapore flavours came to him when he was in the cinema and he saw a lady smuggling in nasi lemak into the cinema to eat.

“While I was eating my popcorn, I was thinking wow it smells good, but how convenient it would be if she could eat it like the way I eat my popcorn – why not infuse nasi lemak into popcorn? And the rest was history.”

How His CCA Led Him To Play For The National Team: Vignesa Pasupathy

Here’s Why You Should Care About Waterproofing In Singapore And How...

How His CCA Led Him To Play For The National Team:...

The Ultimate Guide To The 25 Best Halal Japanese And Korean...

After Retiring From Corporate Life, She Runs One Of The Most...