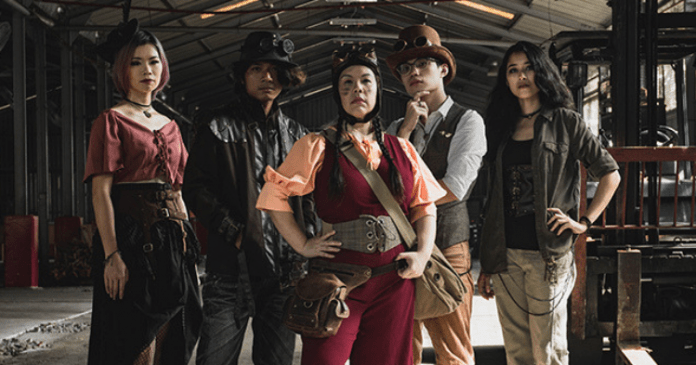 2018 was a sensational year for local music. With a larger audience that’s increasingly open to local musicians, brands are devouring the opportunity at a ‘fresh’ way to reach out to their consumers.

2018 was the year an NDP song featured a range of young local musicians and their spin on the classic ‘We Are Singapore’.

Singapore’s musicians are diversifying fast, and the need to keep their brands relevant is now as real for them as it is for businesses.

I like music, and I like comic books – so when I hear a metal band in Singapore has just self-produced a graphic novel to accompany their album with, my mind races with the building intensity of a riff that’s about to knock your socks off.

Bloody Cool or What?

Sangriento, which means ‘bloody’ in Spanish, is a band that’s been around for close to ten years now. Previously noted for their work covering metal gods X-Japan, the band now presents a one-year-old five-piece lineup that plays symphonic metal featuring operatic vocals over synthesized textures.

To better put it, they play “an epic, huge, looming thundercloud with a silver lining.”

After seeing them perform at the launch of their EP, Blood Pact, I’d say epic without a sliver of doubt.

The new lineup was handpicked specifically for the musical and thematic direction that their frontman Han wanted, boasting prior experience in music and songwriting, as well as a background in theatre.

They all have day jobs, and four of them are teachers.

Following their last tour in Japan, the band decided to peg more meaning to their song structure, which they’d been told by audiences were like stories.

“Comics seemed to be the most practical way to achieve that, so we went with that, but in my head it was more of an animated short series or something,” Rayne says.

As someone who markets, and who’s got a library of comic books in my office, I can tell you that making comic books is no mean feat.

When I see Sangriento’s product (comic and album), I’m legitimately astounded at how they’ve pulled this off just between themselves.

The comic book, titled ‘Blood Pact’ was illustrated entirely by drummer Christal, featuring a story by Guitarist Han. It integrates seamlessly with the album which was written by everyone but Christal, who joined the lineup only afterward.

It’s the type of product that would make the annoying layman go,”this is from Singapore!?”

Each chapter is titled after a song. They’re all of varying genres and are meant to have the album function as more of a soundtrack than a compilation of songs.

A product of a bleeding love, the magic that is Blood Pact lies in intricate time-management between rehearsals and day-jobs. Seeing how much the band puts their souls into their music, it’s safe to say a good bulk of pay-off was present for members before the release of the product itself.

As Candice, Sangriento’s punch-packing vocalist lovingly puts it, “a band is like a marriage…we all have our own lives and our own work and familial and social commitments, but we still have to have regular “date nights” once a week to keep the relationship healthy.”

If Christal’s bright purple hair and role in the band say anything about her personality, it’s that she’s a fiery spark who’s not to be messed with. The pseudo manga artstyle in Blood Pact’s comic is testament to her tirelessness, achieved within a very short time frame after an initial artist pulled out.

“I took to carrying a sketchbook around to work on storyboards while travelling .. and somehow got used to constantly thinking about the script .. when I had some mental space free.”

This isn’t to say the rest of the band wasn’t just as busy; members were shouldering weight that others couldn’t in preparation for Baybeats 2018. Not to mention, the band was only at a strength of three members when the project was initially conceptualised and developed.

Through each member portraying a different character during performances, and having a choir narrate the comic book panels during the musical launch of Blood Pact, it’s clear Sangriento’s out for blood, and whether it’s intentional or not, they’re definitely making a statement.

Rayne tells me they’re nothing more than a bunch of wardrobe raiders, “raiding our grandparents’ houses.. Eventually we even ventured into making our own accessories and selling them at gigs.”

Upon meeting Sangriento and being able to take a step into their little world of burning passion, it’s evident that this bunch of enthusiasts isn’t doing things just to be different.

They’re fans before they are creators, and to me, that’s the most important type of perspective that any creator needs to have.

I left Sangriento’s album launch bursting with pride that what was quite possibly the coolest concert I’d attended was that of a band from Singapore, in Singapore.

In a time and climate where most local audiences are either for or averse to locally created content, Sangriento is a big, proud, mad-talented foot forward.

Despite not wanting to go full-time, the band treats their art form with utmost respect, making the investments they need to and treating their audiences to as much of a multi-levelled experience as possible. It’s everything a potentially niche band needs to not be restricted by their genre.

Some would say that other Singaporean bands should follow suit, and while I agree, I think the same extends to all bands, no matter the location. However, it’s a sad fact that the band’s upcoming tour to Bangkok will do much more for it in the way of ‘credibility’ amongst a majority of local viewers than many of their other efforts.

While some of the band agrees that the arts scene in Singapore is plagued by a general need to lurk within a ‘safe’ zone, they all think there’s one thing that’s not up to mark within the local scene, and it sticks out like a sore thumb.

“If all radio stations stopped playing one of Ed Sheeran’s songs and replaced it with a lesser known local band song, that would probably do way more than any band could do.”