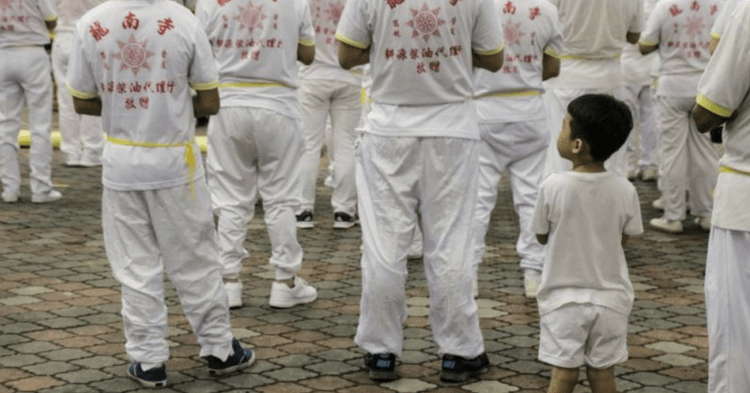 “I, Tammy Chew, live in Lakeside, and my family and I welcome all stars to come, to return to Long Nan Si, my brothers and sisters, do what should be required.”

Holding the joss sticks in between my palms, I bowed and announced my identity in hopes to receive blessings from the gods. It was the night of the receiving, also known as qing shui, and we were all dressed in white, seated by the bank of Kranji reservoir to welcome the nine sons of Dou Mu, the Queen of Heaven.

It was not an event that was easily understood and anyone who knew little about the festival would probably be skeptical seeing a group of people by the river chanting in the middle of the night.

In fact, I still remember being lost in the crowd as the chants grew longer and louder. I looked over to my friend, who was holding onto the camera to capture the process. At that moment, I wondered why people would continue devoting their time to the festival.

What exactly was so enticing about it? As a millennial who began with little knowledge about the celebrated event, it was often a question that I had in mind but that night, on the 16th of October, I was immersed in the moment of spirituality as we invited the heirs of heaven, the patrons of prosperity, wealth and good health.

My curiosity was piqued since about such a ritual of spirit mediumship.

Against a backdrop of cricketing, Master Chen and his devotees continued chanting as I observed the ceremonial layout and wondered about its significance. I scanned across what was before me: there were scriptures, lighters, and instruments all arranged according to what seemed like a sacramental order.

Later that night I found out that each item of the offerings, which included an urn, fortune cakes, and fruits was actually placed 2cm apart, which symbolically represented the five cosmic elements of wood, fire, metal, water, and earth.

Master Chen sank deeper into the chants as he invited and invoked the spirits to come into the urn with the burning benzoin. When asked about their arrival, one of the devotees mentioned that it was a common belief to symbolise the vigorous burning of the ashes as a divine sign that the spirits had entered the flame.

Over the next few days before the ‘send off’, I visited the tentage. Two uncles that I talked to shared the same sentiments about their purpose of participating in the festival. Other than the fact that they were doing it in hopes of striking the lottery, the uncles were also involved because the temple lacked manpower.

One of them was previously a temple cook – he lamented the plight of Long Nan Si and its space constraints as a result of government policies. Temples had to continuously renovate due to changes in regulations and there were many shifts in Long Nan Si over the years which had caused the temple to lose some of its followers.

However, the few dedicated devotees worked hard to advance forward despite facing such setbacks and the preparations soon gained momentum.

Long Nan Si, like every other temple which celebrates the Nine Emperor Gods festival, has their own unique bridge. They say one should learn how to leave one’s problems like water under the bridge.

It was rather exciting to cross over to the other side – it was as though I was venturing into a new life. I watched as a few members of the public did the same with smiles on their faces.

I could tell they were hesitant but eager, skeptical but audacious. And so was I.

One of the devotees mentioned that “crossing the bridge’ was significant in overcoming evil. As a man continued his journey of purification, the lady explained that “it was necessary to have seven lamps beneath the bridge and a bowl of water” because it represented the Big Dipper stars and the Yin element respectively.

Together, these would absorb all the bad energy of those passing above. The man completed his ‘cleansing procession’ and shot me a satisfied grin, as though he was sure he had received blessings from the deities.

The bridge, carefully assembled with wooden truss and planks was a stage for a brief spiritual moment with the gods. Master Chen told us about paranormal encounters four days before the ‘send off’.

“Water spirits are one of the most vicious spirits,” he said, with a look of warning in his eyes.

He explained that there were various types of spirits with different levels of strength and power, but Dou Mu, the heavenly Queen of Heaven and mother of the Nine Emperor Gods yielded exceptional power as a strong Water Spirit and therefore was given authority over the seas.

It was no wonder the gods had to be fetched and sent off from their place of origin – a river or sea.

The day has come for the gods to leave and we arrived at 7PM. Devotees and worshippers eagerly waited for the ceremony to begin. I made a beeline to the cooking area to get myself a plate of vegetarian bee hoon with deep fried beancurd, which was something that I had been having since the past month as part of the ritual. 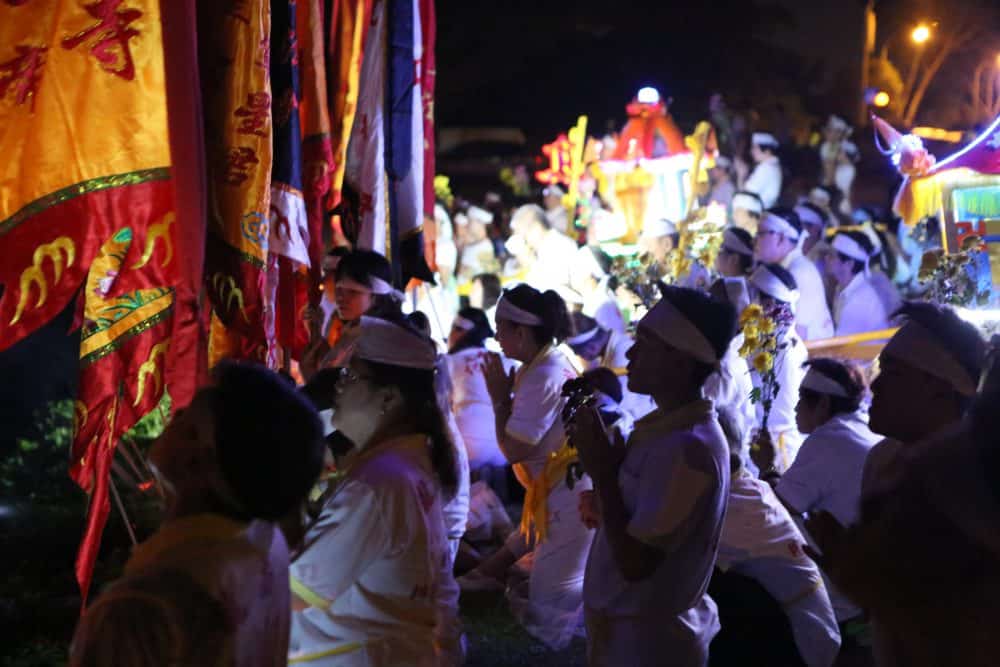 I was, unfortunately, not allowed into the inner compound of the Dou Mu Gong as compared to the others who were dutiful to their vegetarian diet. Nevertheless, I savoured every spoonful of the vegetarian delicacy that evening.

Dusk was approaching and the procession to entertain the gods began as the night continued to fall.

“In order to receive blessings, the gods must be entertained”, said one of the devotees.

Lighted candles, coloured banners, and red lanterns lighted up the dull atmosphere of an HDB’s concourse, but nothing could add vibrancy to such a picturesque quite as successfully as the illustrious tribute of the lion dance troupe.

The performers arrived and took centre stage, dancing to the beat of the drums as the crowd circled around them to watch the show. When the two lion dance performers peeled oranges and laid out an auspicious number on the ground, the crowd was visibly excited, fishing out their phones to capture the auspicious number. 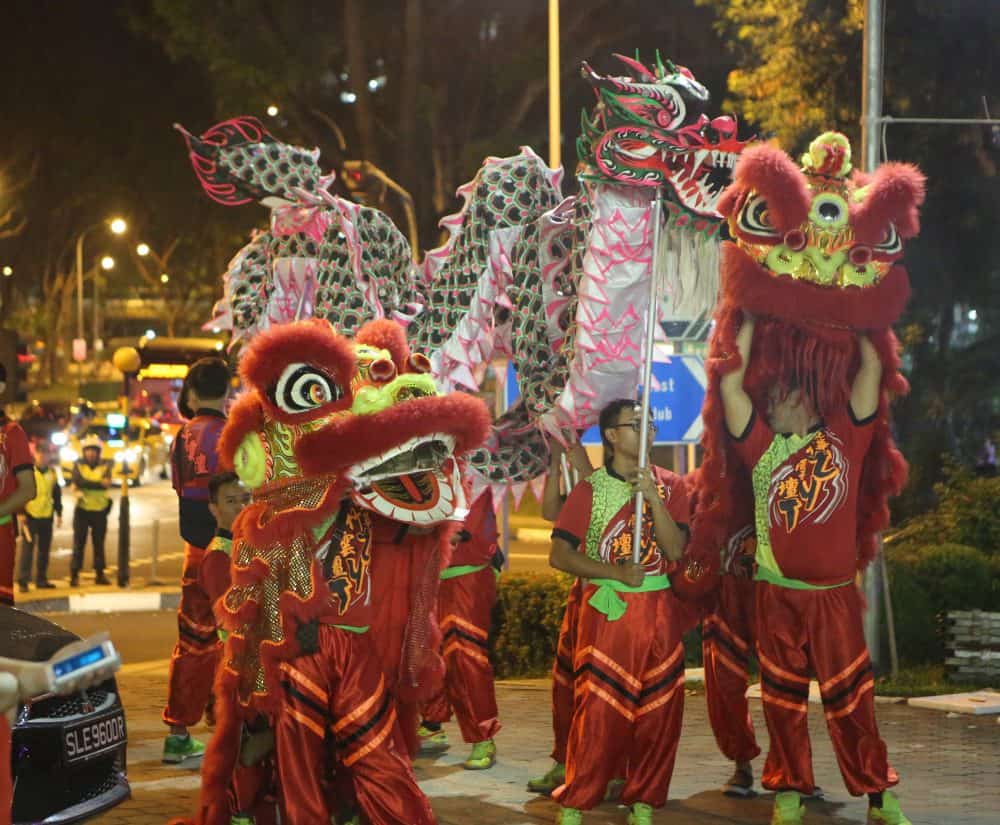 After entertaining the gods, the ceremony proceeded to an hour-long recitation of chants where the males and females stood in a formation. Uncertain about the chants, I squeezed through the ladies to see the verses that were written on a piece of large yellow cloth propped up like a scroll.

After the chants were over, I scrambled to a corner to capture the devotees who were carrying the Nine Emperor Gods flags as they led the rest to circle the tentage, concurrently repeating the verses that Master Chen was blaring through his loudhailer.

After two rounds, the motion came to a stop and the more experienced helpers invited the urn into the “Dou Mu Gong” to be placed in the sedan chairs. 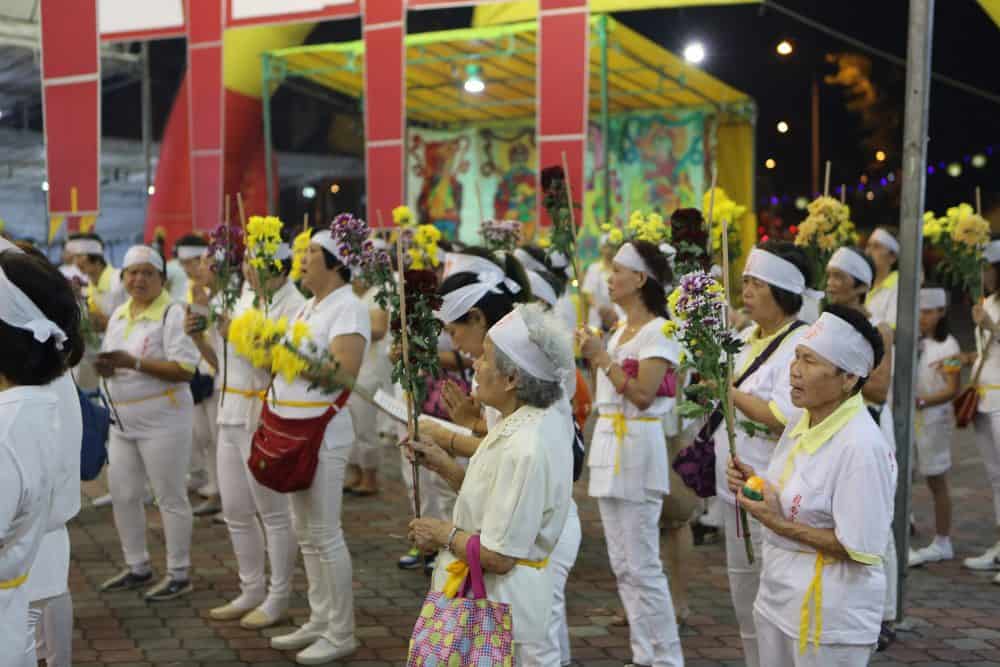 As I was told, these sedan chairs were believed to be possessed by the Nine Emperor Gods on their annual birthday sojourns to Earth and it was used to deliver the spirits to and from their destinations.

“Tian Gong Wan Sui! Tian Gong Wan Sui!” The worshippers shouted as the sedan chairs were each lifted by four stronger devotees who were usually men. What seemed like a normal activity soon turned into something supernatural.

Bewilderment filled the air as the sedan chairs began to jerk and rock aimlessly. 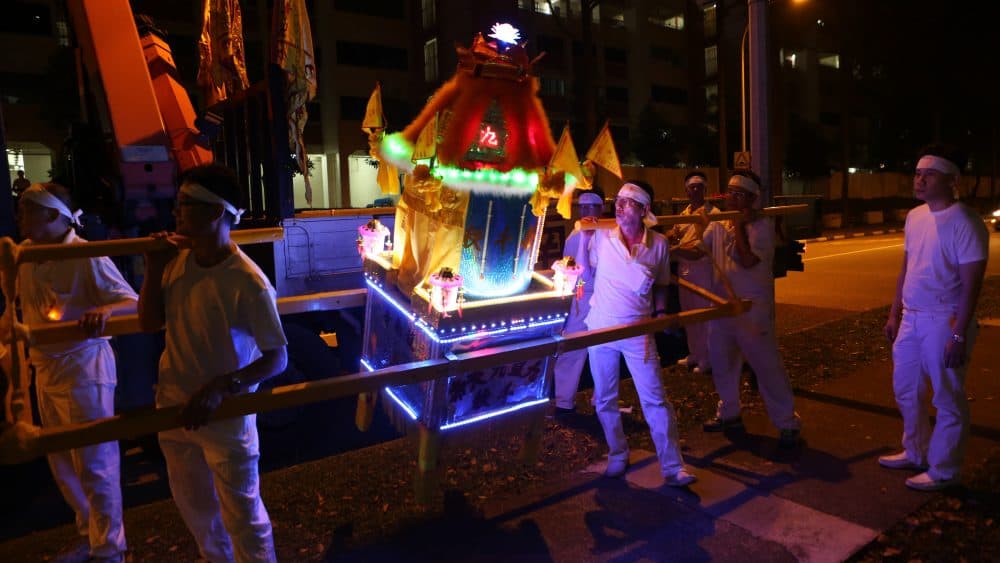 We embarked on the last trip towards Kranji reservoir to complete the final procession. The lion dance troupe paraded the streets with their loud instruments, replacing the solemn mood of the night with a festive treat.

At the reservoir, the nine flags representing the Nine Emperor Gods were raised by the flag carriers who sat at the front of the waters. 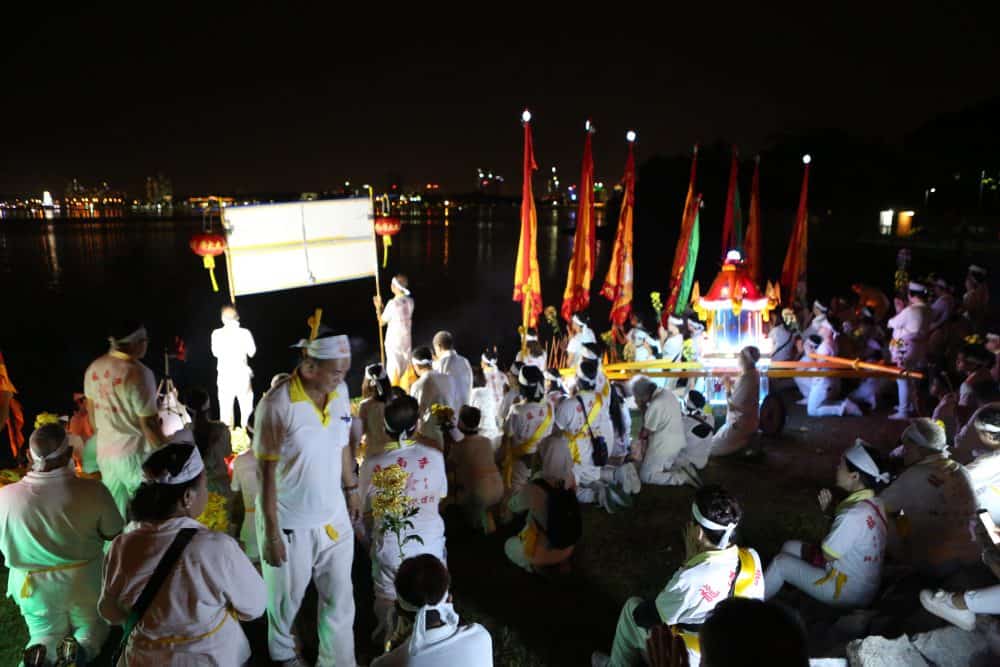 Sitting on the grassy banks of the reservoir, I had come to notice that the ceremonial layout was similar to that night of receiving – the offerings and the urn were rightfully placed and the devotees were once again seated according to their gender.

The chanting took about half an hour to complete and the Nine Emperor Gods had made their return. The ceremony ended with the burning of the dragon boat, which had pink slips of paper that indicated the devotees’ particulars.

We witnessed the boat drift away into an endless trail as the fire consumed its paper shell.

This signified the end of the annual nine-day celebration of the gods’ visit to Earth.

Just like the ardent flames, the Nine Emperor Gods festival has brought ebullience to the shores of Singapore and all devotees of the festival will continue to venerate, in all its rituals, the gods’ and their sojourns to the human world.

All photos are provided by the research team of Long Nan Si 2017.