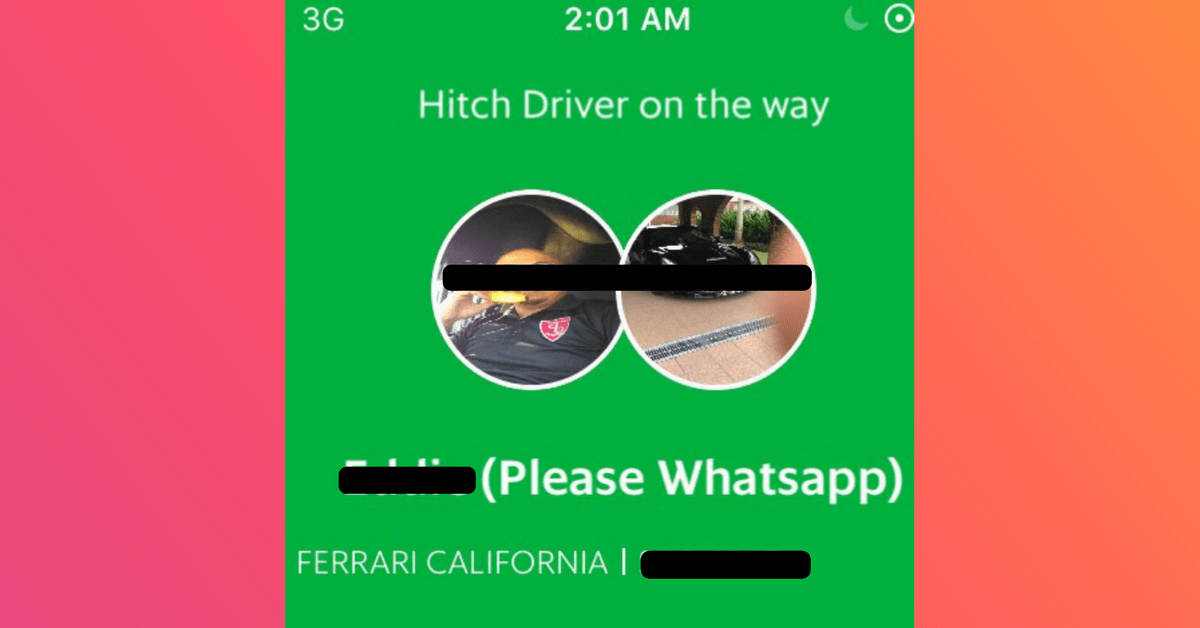 For the uninitiated, “GrabHitch is a social carpooling platform powered by every day, non-commercial drivers giving you a lift along the way to cover petrol costs.”

There has been a long-standing debate about GrabHitch being the new platform for picking up girls (not just in a car).  I’ve been using GrabHitch since October 2016 and take a hitch to work on a daily basis.

My morning routine consists of waking up, booking a hitch and heading to shower. By the time I come back, 95% of the time I usually get a hitch confirmed – that’s within 10 to 30minutes.

I believe that most ladies would agree with me that females get a ride much faster than your male companions. It might be your display picture or Grab drivers specifically filtering out female-only passengers.

After speaking to some of the GrabHitch drivers, you’ll be surprised that most of them choose to pick up female passengers only. Once a driver taps and filters out ‘female only’ passengers – guys you’re out of the game.

Which probably explains why you don’t get a hitch most of the time.

Patrick, one of my GrabHitch drivers had a realisation of sorts after chatting with him about this topic. He never got a Hitch and I told him to try it out and get his wife to try booking a GrabHitch instead.

Based on my experience, however, here are a few drivers that you may encounter while hitching a ride:

Encountering flashy rides like Mercedes E Class, Jaguar etc. is possible. Some might wonder why are they even doing GrabHitch when they can afford such luxury cars. Well, in my experience not all of them are out to pick up ladies. 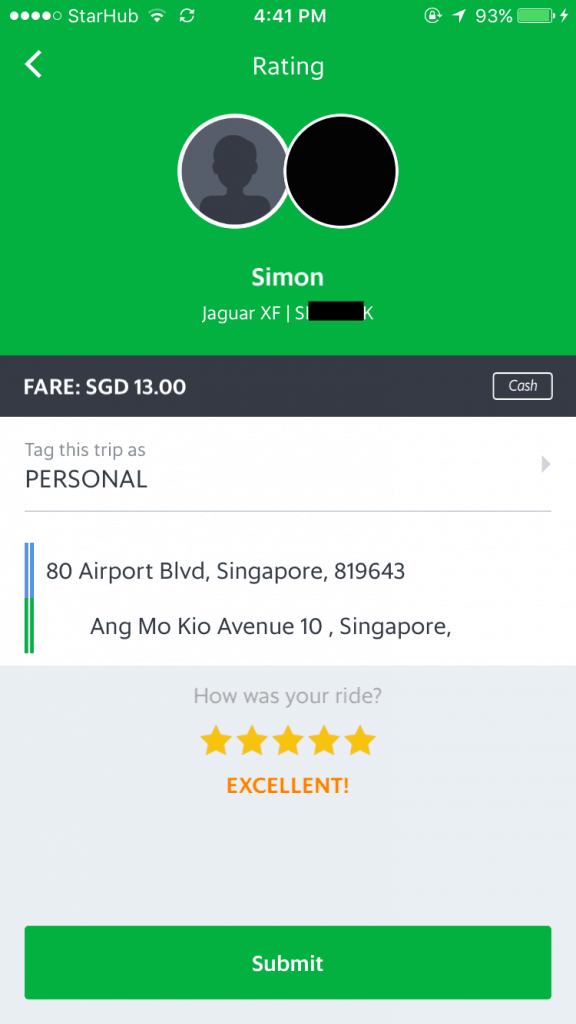 Some of them are genuinely hitching you because it’s on the way to their end destination. So maybe we should take a step back and not judge these group of drivers before we actually get to know them.

Insistent drivers on the other hand.. get to me a little. We all understand that GrabHitch is about social carpooling, and it means being sociable. We are encouraged to take the front seat and make a new friend along the way.

However, when drivers insist that you take the front seat it’s usually for 2 reasons.

Again, there are drivers who are not tactful about wanting you to take the front seat and there are those who are friendly and polite. 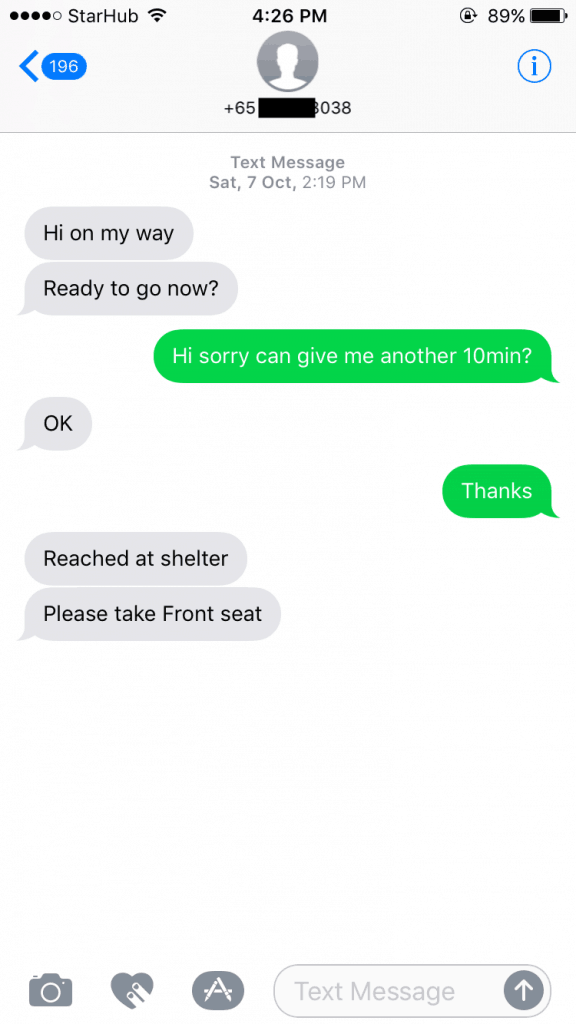 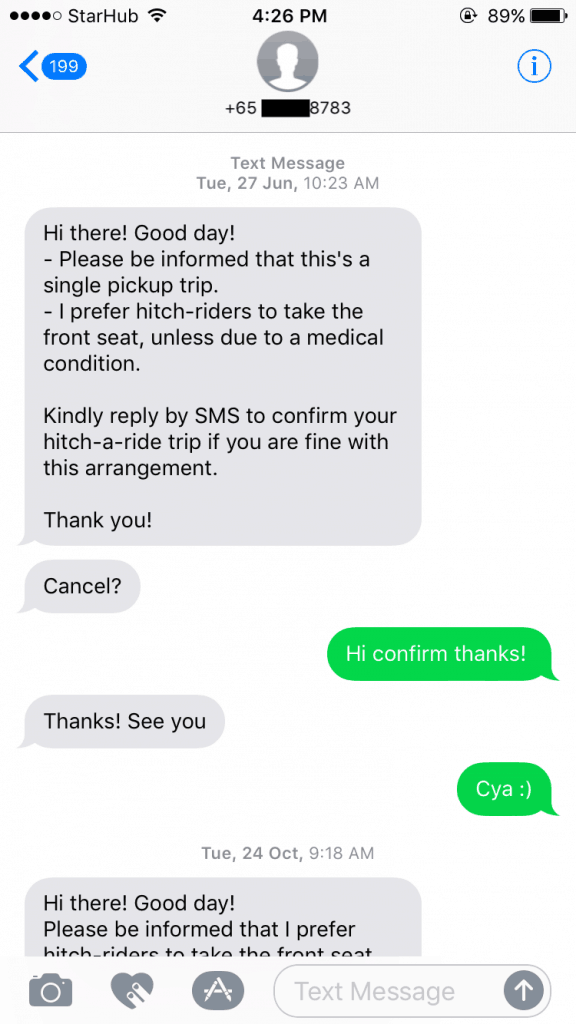 I’m sure there’s many of you who may agree or disagree with me. Yes, there might be genuine reasons to which the driver may want you to take the front seat. Eg. The backseats are dirty, cluttered and so on.

But at the end of the day, we are paying customers who paid for the ride. Is it alright for drivers to insist that we sit in the front seat? 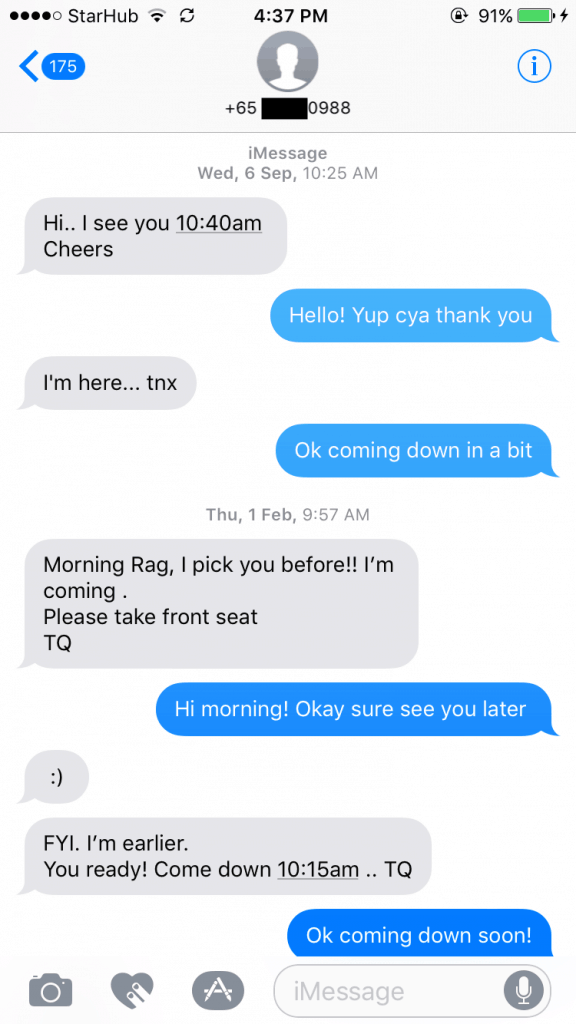 I personally encountered a driver who made me uncomfortable. He was a regular GrabHitch driver that would pick me up twice a week around 10pm – 11pm.

Everything was cool and friendly until he started slipping in comments like, ‘You look sexy tonight’ and ‘Text me anytime you need a hitch’. His steady seedy gaze did not help the situation.

This brings me to my next point.

Things Get A Little Creepy As Night Falls

As night falls, it’s usually harder to get a hitch in the wee hours of the morning. Even if you do, chances are that you’ll get a driver who is out ‘hunting’ to pick up ladies or just trying their luck.

One of my female friends experienced this before and she said that they usually park their cars at Clarke Quay area waiting for a potential hitch rider in the wee hours of the morning.

After confirming the booking, they might come up with excuses to not take your ride and use it as a way to get your number.

Here’s what transpired between my friend and the mentioned hitch driver: 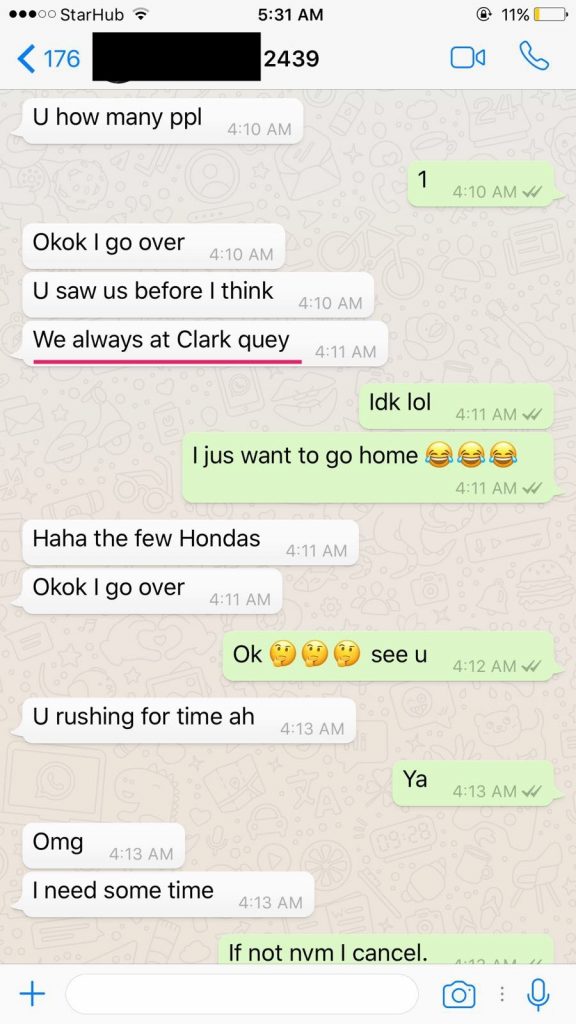 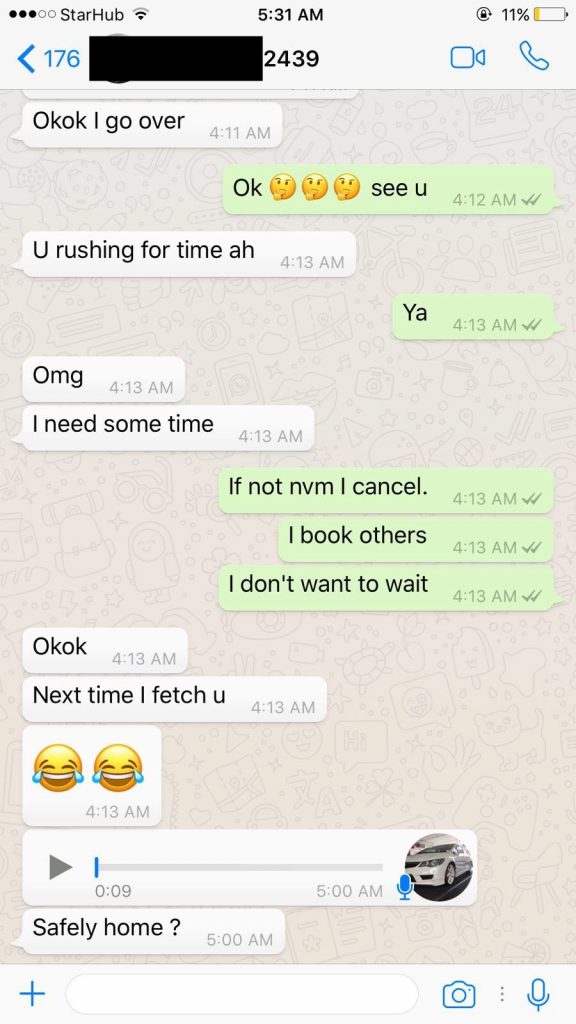 According to Grab, your driver can only get your phone number upon accepting your booking.

That then begs the question: Did they accept your ride because they wanted your number? Or are they genuinely not able to make it in time for your booking?

However, there are late night drivers who are genuinely concerned if you’ve reached home safely. 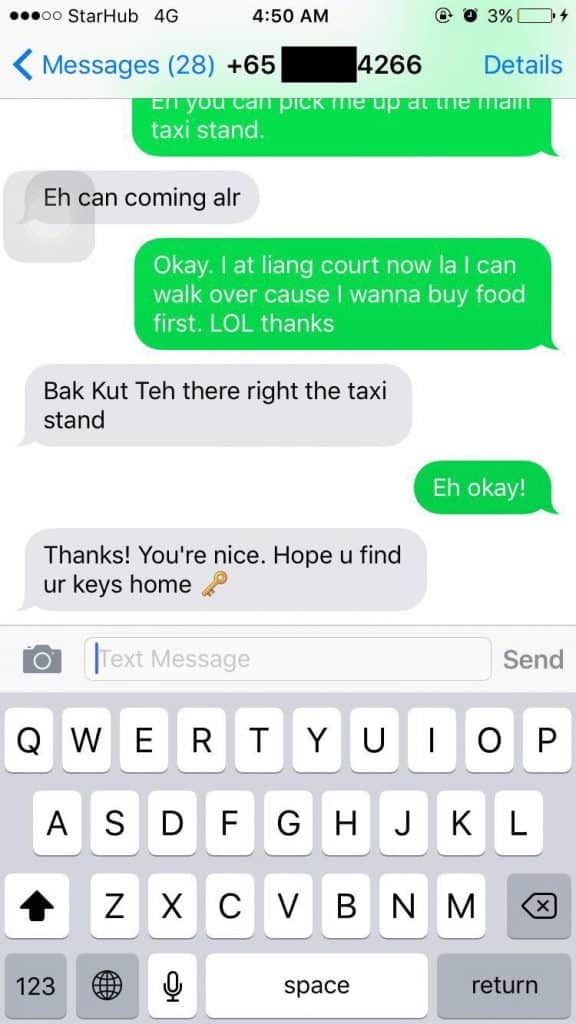 Some drivers even go out of their way to pick you up again. 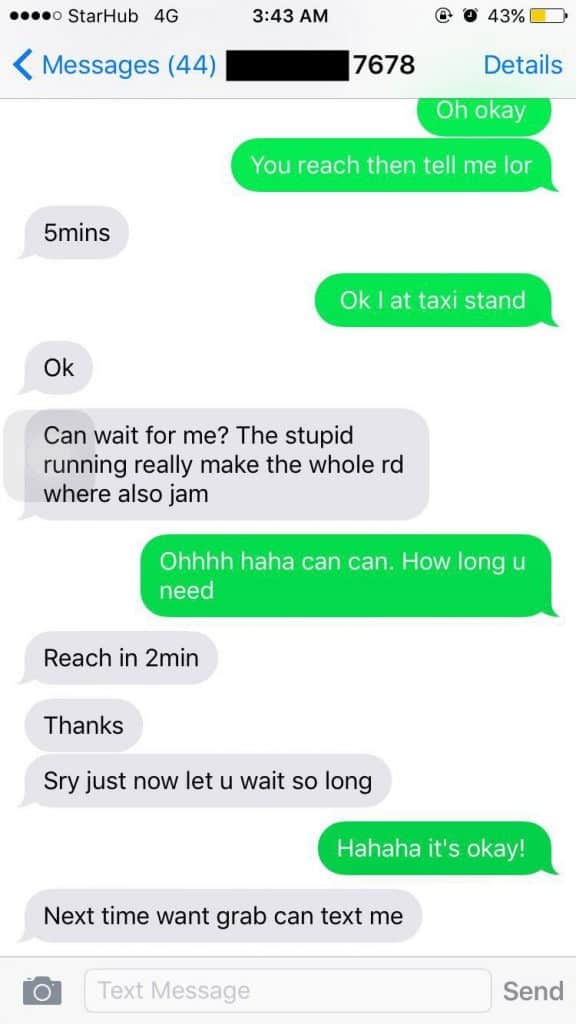 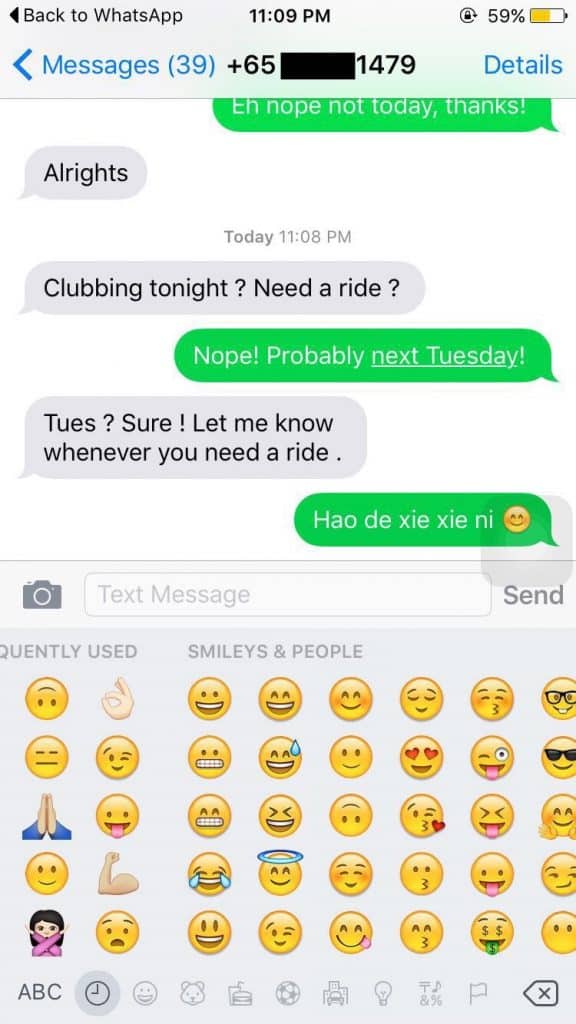 In the earlier years, the number of GrabHitch drivers is significantly lesser as is hasn’t been long since Grab doled out this new carpooling system.

Getting a ride was much harder as compared to now, and I personally feel that most drivers who first joined this program were indeed looking for something more than just a ride.

However, the number of genuine hitch drivers now is much higher. They are indeed, genuine drivers who are out there making some extra cash on their way to work. Not just to pick up ladies.

Thank your GrabHitch driver the next time for providing a cheaper, alternative way of travelling in comfort to your desired destination. Who knows, you might meet your match on the ride!