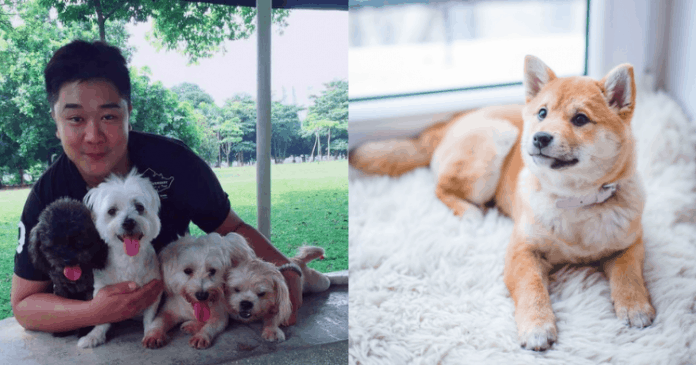 Ezekiel Ong works with dogs and other animals on a daily basis, but he is not Singapore’s own version of Cesar Millan.

Rather than training and disciplining dogs, Ezekiel’s profession is of a calmer sort – he is one of the few expert animal communicators in Singapore, an individual who claims to be able to connect and talk to our furry friends using just a single photo of the animal.

Over the course of six years, Ezekiel has helped a variety of pet owners understand their dogs, cats, and even hamsters and rabbits better. Due to his abilities in animal communication, he has also helped owners find lost pets and helped dying pets “cross over” to the other world in a peaceful manner.

As a dog owner myself, I was eager to engage Ezekiel to understand my dog better, but my enthusiasm was interlaced with skepticism; talking to animals seems like an uncanny ability that is out of this world. To satisfy my curiosity, I met up with Ezekiel and cleared up some of my doubts about his profession and the world of animal communication.

Animals Have Free Will Too

The process of communicating with an animal is simple: the client provides Ezekiel with brief information about his or her pet, some photos of the pet, and a list of fifteen questions he or she might want to ask the animal.

Upon fixing a date and time with the client, Ezekiel will then communicate with the pet for thirty minutes, before doing a thirty-minute phone consultation with the client to explain to him or her in detail what their pet has to say.

While this might sound simple, Ezekiel explained that animal communication is more complicated than what it seems to be. Animal communicators do not just talk to pets and gain completely accurate answers.

“Pets have free will too,” Ezekiel stated, and animal communicators might sometimes have difficulties with animals who are not willing to talk or speak the truth. Certain dogs, such as puppies, might have short attention spans and thus be unable to answer all fifteen questions, or only give unclear or brief one-word replies.

Furthermore, it is also important for the owner to self-reflect when he or she refuses to believe the words of an animal communicator. “Sometimes, the dog might really like fish but did not get a chance to taste it because you have always been feeding it chicken,” Ezekiel explained with a laugh.

Due to all these complications, Ezekiel believed that the job of an animal communicator like himself is not to give “a hundred percent accurate reading” of the animal as there will always be some inaccuracies. Rather, his purpose as an animal communicator is to provide the pet with an opportunity to gain a voice and explain themselves.

“In a nutshell, animal communication is about speaking on behalf of the pet.” Ezekiel concluded.

Most of the time, Ezekiel will only communicate with the animal using a photo. However, he makes exceptions for animals who are dying and in need of assistance to pass away peacefully – or in other words, to “cross over to the rainbow bridge”.

Often, Ezekiel will visit the client’s house and ensures that the environment is comfortable enough for the dying pet by conducting some energy healing sessions. “If the place is a bit too dark and negative, I will help cleanse the space for the dog to go in a more cheerful manner,” He explained.

Ezekiel claimed that this is his personal soft spot, as the death of his first dog was exactly what got him inspired to learn about animal communication in the first place.

His first dog was a female Maltese who stayed at his grandmother’s house for the long term. At that time, Ezekiel had co-founded a pet shop and was keen about bringing his dog to the shop to enjoy its pet spa facilities.

However upon calling his relatives up, he was met with the news that his dog had suddenly passed away, and had already been sent for mass cremation.

“I did not get to say a final goodbye, and was left very upset with a lot of questions and doubts,” Ezekiel said.

As a result, he decided to find out more about dogs dying, and realised that some individuals believe in the existence of a “rainbow bridge”, an after-death heaven for pets.

The only way to access the rainbow bridge and to communicate with dead pets is to pick up skills in animal communication.

Despite feeling skeptical, Ezekiel signed up for a training course under the guidance of Ms Rosina Arquati, an internationally famous animal communicator. He was determined to learn, and after understanding how to meditate to get into the right state of mind, Ezekiel successfully communicated with his Maltese and gained closure for himself.

Soon after the end of the course, he decided to obtain permission from the pet owners whom he saw at his pet shop and practiced communicating with their dogs. By practicing on different dogs everyday, Ezekiel was able to build up the foundation in his skills. It was only after a year that he decided to start charging his clients.

Other than animal communication, Ezekiel has also obtained other skills that might be relevant to his career.

One of which is reiki healing, or the channeling of universal healing energy, that he will often use on dying pets. Ezekiel explained that both reiki healing and animal communication belong to New Age, a new belief system that has its fair share of believers all over the world.

Furthermore, Ezekiel is also a certified Emotional Freedom Technique Practitioner and has obtained a Masters’ Degree in Neurolinguistic Programming. These might sound confusing but they are in fact relevant skills to his career as an animal communicator.

Despite so, Ezekiel emphasised that he does not go around strongly advocating and forcing people to believe in animal communication and other New Age beliefs. “People are free to choose whether they want to believe it or not,” Ezekiel claims.

However, he strongly agrees that it is important for potential clients to be open and receptive to these beliefs rather than consulting animal communicators with ulterior motives, such as intentionally “testing” or “tricking” them.

Most of the times, Ezekiel is able to change the minds of many skeptics through his readings, and he shares with me some of his most memorable experiences in animal communication.

He recounted a recent incident in which a dying toy poodle told him that she will pass away only by May next year. Unfortunately, the toy poodle succumbed to her illness by next week, and Ezekiel was disheartened that his reading had been inaccurate.

However soon after, the dog owner revealed to Ezekiel that she just found out that she was pregnant, and her children were due for labour in May. The toy poodle had expressed her wishes to meet her new family members, but was unable to do so.

To hone his own skills and share them with more passionate animal lovers, Ezekiel has also obtained training certificates in pedagogy, such as the WSQ Advanced Certificate in Training and Assessment (ACTA), and has since opened up a few workshops teaching students how to communicate with their own pets and other animals.

He is also currently clocking his coaching practicum hours by being part of the Mind Transformations’ Coaching Certification program.

He is also currently making plans to conduct more workshops, and to collaborate with experts in other fields such as magnetic therapy and crystal healing.

When asked about what should someone do to become an animal communicator, Ezekiel emphasised that money should not be the main driving force of one’s career. Instead, Ezekiel believes that the most satisfying aspects of his career are his abilities to help animals find a voice and improve relationships between pets and their owners.

It is also important to be slightly “thick-skinned” and ignore others’ criticisms and snide remarks, as there are bound to be skeptics who do not believe in what you do.

Communicating With My Dog

At the last part of the interview, I shared with Ezekiel my experiences as a fellow pet owner and Ezekiel decided to do a free communication session for myself and Taffy, my three year old maltipoo.

It might seem peculiar to see him staring at Taffy’s photos and telling me his observations, but I was admittedly quite surprised by the results. Some of his remarks about Taffy were shockingly accurate and they were things he could not have known about.

For example, Ezekiel chuckled and remarked that Taffy did not like people rubbing her belly as we had often told her that she was slightly chubbier on the stomach. She would prefer us to praise her shining coat instead, which is also something we did on a regular basis.

Overall, animal communication still seemed like an enigma to me. Just like fortune-telling or psychic abilities, it isn’t something that is easy to understand and perhaps never will be.

However, I believe that Ezekiel’s dedication to his job serves as an inspiration for many animal lovers out there in the world, as he tries his best to improve the lives of as many pets and pet owners as possible throughout his career.