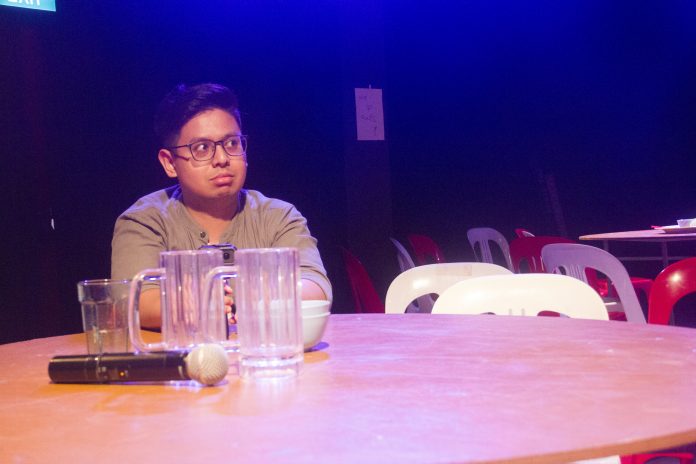 Adeeb Fazah’s love for drama dates back to primary school when he was cast as King Neptune in his school’s version of The Little Mermaid for their annual year-end production.

Today, he is a theatre director and co-founder of The Second Breakfast Company, a not-for-profit theatre company.

Adeeb got his first gig in this play because his teachers thought it would be funny for the king to be played by the smallest person available.

“I remember one funny moment where we decided the royal guards would have to lift me off the ground so I could place the crown on my daughter’s head. My daughter was being played by a primary six student. Fun times,” he adds.

Adeeb studied Theatre Studies and Drama at the A-Levels and pursued a minor in Drama and Performance at Nanyang Technological University where he majored in Communication Studies.

He shares that he enjoyed the learning process at university much more primarily because he felt he had ownership over what he was learning and liberation, unlike the A-Levels.

He got to choose the modules he wanted to take and craft his own learning journey, decide when he wanted to do what and at what pace. He found that the things he was doing and the things that he was learning had many overlaps.

When it came to communication studies modules, Adeeb saw the opportunity to apply things he’d learned from drama like directing a scene, making a speech and telling a story.

On the other hand, when it came to drama modules (and his drama work inside and outside of school), he could definitely apply the knowledge and skills he gained from communication studies like identifying the main messaging and target audience among other things.

When the time came to choose an area of exploration for his final year project, Adeeb, along with three of his friends embarked on a communication campaign to promote theatre to university students, marrying both of his key interest areas.

Adeeb’s journey towards creating The Second Breakfast Company started at Yellow Chair Productions based out of Tampines Central Community Club where he was acting, directing, and sometimes writing.

“We were going at an exciting pace, producing four main season productions at the Drama Centre Black Box per year, alongside off-season shows on a smaller scale,” he shares.

One day, Yellow Chair went on a hiatus and the Artistic Director Mohamad Shaifulbahri brought some of the team members together to see if they wanted to form a new collective.

It was a group of five with different backgrounds: two creatives, two producers, one technical and production expert. They spent a year discussing, writing and rewriting their mission statements, and had small scale projects as a kind of “year zero”.

By the end, they were ready with a mission and vision, and The Second Breakfast Company was born.

“We wanted to create work with young people, for young people, and we were interested in exploring older Singaporean plays as well as new plays by young people. We started off with just one main season show in the year 2016, which was Family, written 20 years prior by Leow Puay Tin. Today, the team is 4-persons strong. Kristine and Denise are our producers, Dominic is our dramaturg, and I am the artistic director.”

The Second Breakfast Company’s last project culminated in November 2019 where a new playwright by the name of Aslam Shah came together with emerging theatre-makers Tan Hui Er and Lynn Chia with a cast of young actors to create The Hawker.

The Hawker was designed so that an audience would come into a hawker centre (with plates of food), with characters and scenes unfolding around the audience members.

They also explore older plays from the Singapore canon of theatre. “It’s been a tremendous honour to have been working closely with local literature pioneer Robert Yeo, who turns 80 this year. We are staging his work The Singapore Trilogythis October in a new version that (for the first time ever) combines the three plays into one,” Adeeb shares.

These three plays were groundbreaking in their own rights, portraying Singaporean characters and Singaporean politics.

With each project, Adeeb learns a lot about himself as a creative and a human being: what he likes, what he dislikes, what keeps him going, and what makes him angry. Theatre is more like a self-exploration pursuit for him.

“If I were to choose one highlight, I would say that being able to fly the Singapore flag at the Edinburgh Fringe in 2017-one of the world’s largest arts festival, was quite a big milestone. I directed a monologue written and performed by Mohamad Shaifulbahri who by then had formed Bhumi Collective. Each day I would get out in the morning, we would do our show at noon, have lunch, and the rest of the day we were going in and out of theatres across town watching maybe 5 shows till it was time for bed. I got to see the theatre from all parts of the world, and that gave me so much energy and inspiration to push myself to create more interesting things.”

Amongst the entire process, he enjoys meeting young people the most. “We hold open auditions for most of our shows as we feel a need to be welcoming to new talent, young ones, emerging ones, some coming back from a break, some fresh from graduation.”

This helps them gauge what the talent pool is like at that point in time, make new friends and get to know young people with similar interests.

They also get the advantage of discovering and working with up-and-comers, which is very exciting to then watch where they go next, and what other work they create.

Is Theater A Viable Source Of Income?

I ask Adeeb if theatre can be a viable source of income for artists in Singapore — do we have a good (financial) support system (grants, fellowships etc)?

“Great question! I’m still trying to determine the answer. If you’re going into theatre in Singapore, you’re probably going to start as a freelancer. And that is a very scary start to your career. You will face times of uncertainty – will I get a paycheque next month? Will I go hungry? You will have to navigate contracts and rates and invoices.”

Adeeb explains that gigs can be tough to find, so artists generally for other means of sustenance – television, teaching, singing, dancing, corporate gigs and so on.

In a nutshell, you must really want to be in the theatre scene because then only, will you find a way.

When I ask Adeeb about his thoughts on the local theatre scene, he says, “If you are asking for a complete diagnosis on the scene, I will have to pass. There are parts of the scene I don’t know, people I have never spoken to, companies I have never heard of. But from my limited knowledge and experience, it’s a scene that is bursting with energy.”

However, in his opinion, one thing needs to be worked on — the audience. “We need to expand the audience pool beyond the converted. How can we keep creating, producing and hiring, if we don’t have an audience that grows alongside the scene’s expansion? It’s quite simply a matter of demand and supply.”

Learn more about Adeeb here and find out more about The Second Breakfast Company here.