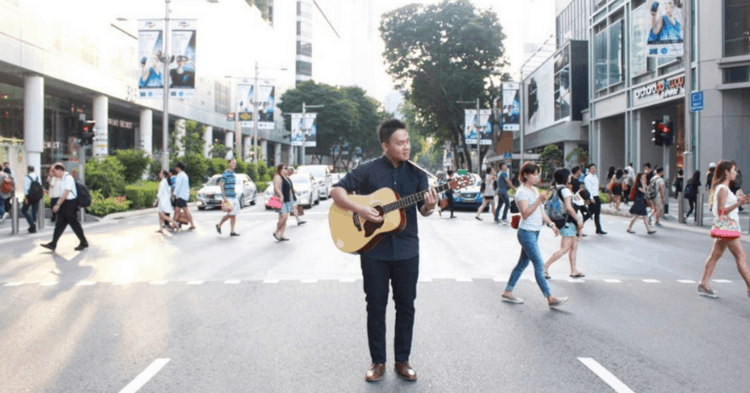 When we graduate from school and enter the workforce, we often begin by scouting job portals to begin the search for our first job.

However, Lai Zi Jie, also known by his moniker The Pudgy Busker, is not like most of us.

Having just graduated from NTU last year with a major in history, Zi Jie started busking in order to get more exposure – his aim was to play for weddings and events.

Nonetheless, he also shares that it had always been his dream to do music full-time, knowing studies and good grades had not been his forte – “since primary school”, he says.

He explains his foray into busking: “I saw busking as a stepping stone (to pursue music full-time) – and little did I know, I fell in love with it.”

A Love For Busking

While he has since been able to achieve his goal by the end of his first year, he also discovered two main reasons behind his love for it –

“Firstly, (the experience of busking) is different every day! I get to meet people from all walks of life every day and strike up conversations with many of them. That’s when (I realise) the saying that music is a universal language (is) indeed very true.”

“Secondly, I realized that the act in busking itself served as (a) motivation and inspiration to many – a way which encouraged them to pursue their dreams despite the fears they have.”

Zi Jie also shares that throughout his years of busking, he has “had the privilege of receiving countless thank you notes and emails (from listeners) to let (him) know how busking had inspired them.”

I explain to Zi Jie that I see nothing wrong in busking in and of itself – I’ve met some really talented buskers in, for example, weekend markets abroad – but it seems to me that busking undeniably has a better reputation overseas than in Singapore. The reputation of buskers in Singapore, in my opinion, seems to be less favourable compared to those overseas.

Yet, on this perspective, Zi Jie firmly begs to differ.

“The connotation attached to busking ten years ago was a negative one, where buskers (were) seen as street peddlers. However, today I am extremely proud to happy to say that that’s a thing of the past.”

“Walk down the streets of Orchard Road on the weekend (and) you will see many buskers, nicely dressed, taking pride in their art and performing their hearts out.”

“These buskers put hours and hours into their work, and Singaporeans are starting to see that.”

As he shares this, I am reminded of the buskers I saw recently – one at the open space next to The Cathay, and the other outside Punggol MRT station, towards the entrance of the nearby mall.

While I didn’t approach the buskers to chat with them, the first thing which caught my attention was that both sets of buskers had large cardboard placards, publicising their various social media channels.

While I am still a tad cynical on this, I acknowledge that maybe things are gradually starting to change.

Despite the renewed connotations attached to street buskers, Zi Jie admits his family and friends were “definitely sceptical” at the start, when realising he wanted to busk as a full-time pursuit.

“However, upon seeing the doors which busking had opened and the traction I had gained over the years, these sceptics are transformed to supporters, and I am thankful for that!” he shares.

When I try to sift out misconceptions the public has about buskers, Zi Jie’s answer catches me by surprise –

“(It is a misconception that) we don’t need food! But to be fair, I enjoy receiving delicious treats from the
public – such as Krispy Kreme Donuts!”

While I’m left wondering if he meant this half-in-jest, the realist in me can’t help affirming the tidbit of truth in it – I would love it if I was offered a Krispy Kreme donut by a stranger too!

So now we know – instead of feeling obligated to drop some loose change into the busking tin as a sign of support, buying Krispy Kreme donuts is an equally appreciated alternative too – Nutella-filled Krispy Kremes for your favourite buskers, anyone?

Shifting out from a moment’s jest, Zi Jie shares on a more thoughtful note,

“To any misconceptions that the public (has) about us – yes, I am speaking on behalf of every busker – we love what we do and we put our hearts and souls into it. Take a minute to see the light in what we are doing!”

Zi Jie acknowledges the financial instability being a full-time busker can bring, but remains encouraged to persevere amidst discouragement.

“Yes, it can definitely be discouraging at times. (But) I think a simple thought that tomorrow will be a better day always pushes me on. (Despite) having a bad day at busking, you never know who walked past you and what opportunities await you,” he says.

As he shares this, it is clear to me that these are words he truly means, not mere feel-good babble.

After all, while Zi Jie also takes on event packages and wedding gigs – which he is thankful for, and also help him secure a more stable income – he shares that “90% of the events and weddings (he) play(s) for were doors that were opened when people saw (him) busking.”

Zi Jie shares some of the highlights in his journey – in terms of corporate collaborations, this includes being featured on the April 2017 edition of Scoot’s in-flight magazine, in an article titled “How to be a busker in Singapore.”

In addition, he has also had the opportunity to work with Metropolitan Productions’ Alvin Tan, who co-directed The LKY Musical. The duo was working on a project of recording Home, the much beloved local national song – the cover version can be viewed here.

As a busker, he recounts an incident when an audience member dropped him a message after a busking session – he shared how he used to be suicidal, but seeing Zi Jie busk motivated him to keep going.

“This may have been three years ago, but it still manages to touch and encourage me up till today,” says Zi Jie.

Zi Jie, who is also a worship leader in church, is currently working on a Christian album – which he would love to share with as many people as he can.

“Keep on pushing (forwards in the journey) – Singaporeans appreciate talent, they are just not very expressive in the way which they do! Don’t ever pit yourself against other people – the biggest obstacle is yourself.

Stay true to yourself, stay humble, and always be willing to embrace constructive criticisms!”