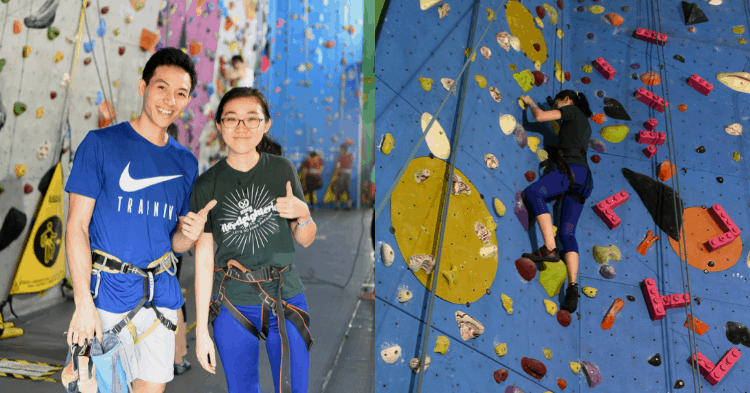 Trying a new sport can be fun. But it can also be nerve-racking going in for the first time, especially if the sport is a physically demanding one like rock climbing. Not to mention – I’m not the best when it comes to heights.

Stepping into the climbing gym for my first-ever climbing session, I was feeling anxious. I quickly realised, though, that I had little reason to feel so. I had an excellent trainer guiding me – Nicholas Lee, a professional climber with 11 years of experience.

Now at 28, he hasn’t stopped climbing, traveling far and wide to take part in multiple international competitions and train with some of the top climbers in the world.

I strapped on my climbing shoes and harness and hoped for the best.

One Step At A Time 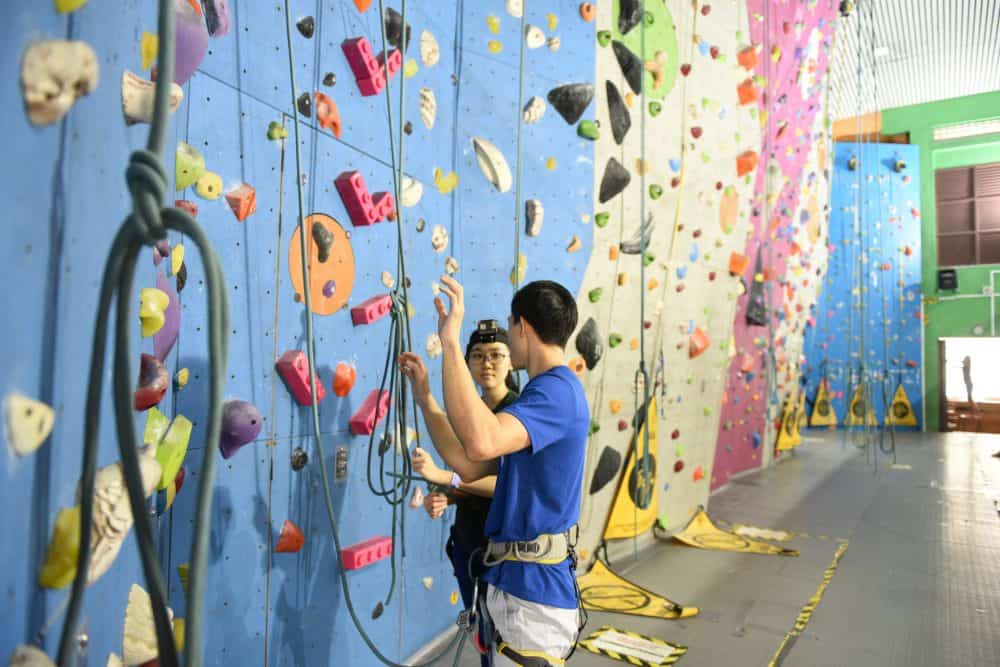 Nicholas explained to me that the colourful odd-shaped steps on the walls are called holds, and each colour code charts different routes that range from easy to hard grades. Needless to say, I’d be starting off with the easiest route.

All strapped up, I tried to imagine myself up there, hanging onto that highest red hold like a spider monkey. Yeah, I thought, that could happen – in the jungle of my dreams.

My eyes travelled halfway down the wall to the third panel. I’d be thrilled if I could get there by the end of the day.

I got onto the starting holds for my hands and feet. Then, grabbing the next hold with my left hand, I eyed a good one for my right foot and pulled myself up to reach it. 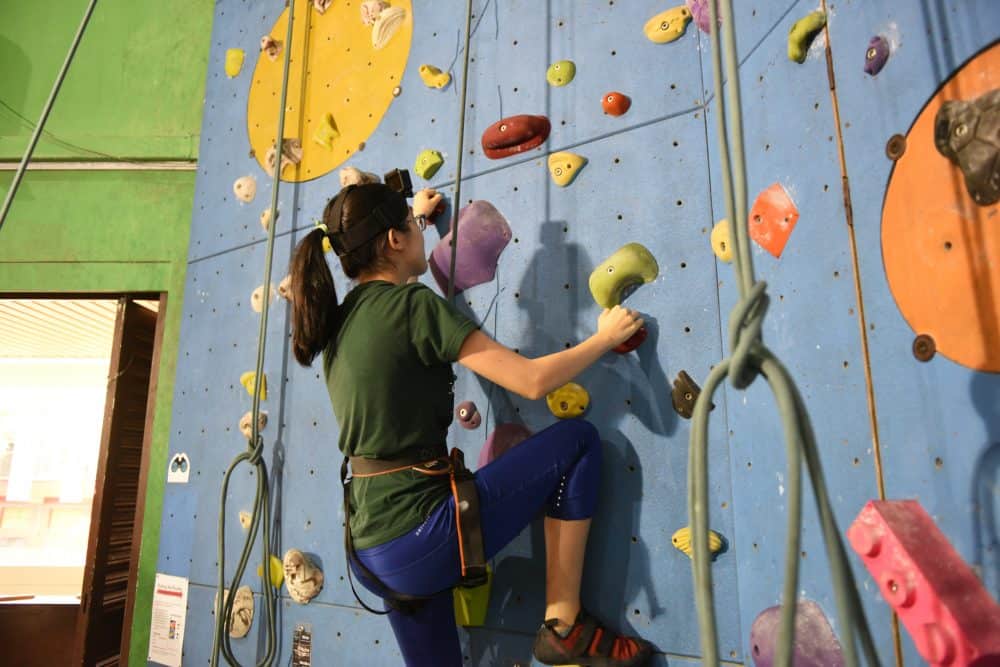 From down where he was belaying, Nicholas was calling out where I should go. Looking down was enough to make me nervous, but the next few spots were far and at odd angles. I hesitated before going for them. After a few more shaky moves, Nicholas said that I should let go now.

I stared at the rope in front of me. I was supposed to let go completely and hold on to this? Unfortunately, Nicholas meant it.

Taking a deep breath, I released the grip of my hands and clutched the rope.

As much as I was afraid, the small buzz of triumph that my body didn’t totally fail me gave me courage to try again. Ironically, the fear of falling from such a height pushed me to trust my body.

There’s Always Gonna Be Another Mountain 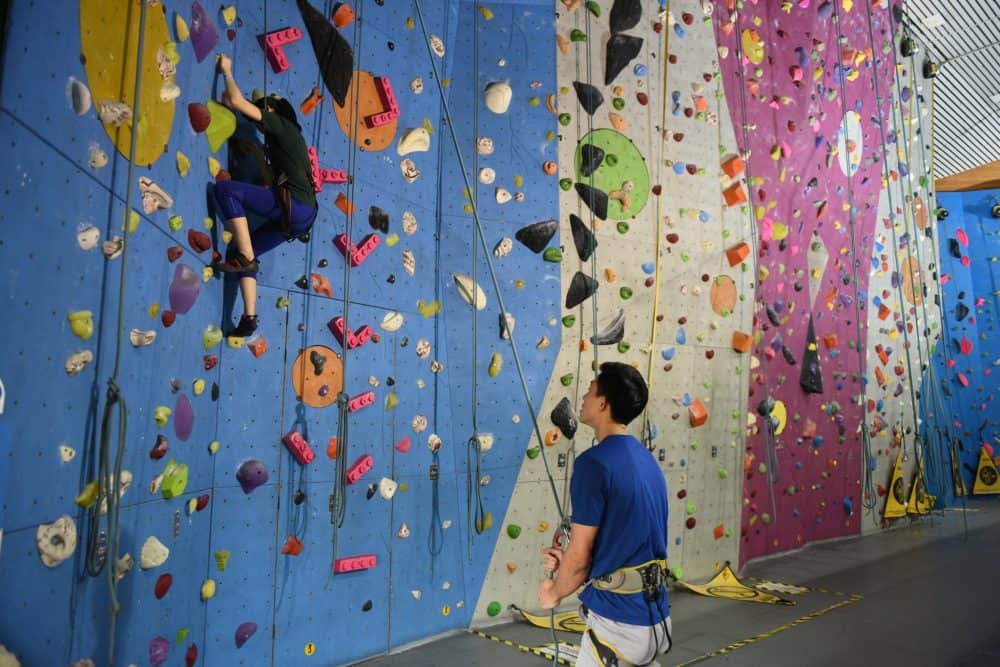 Exploring possibilities with both your mind and body is what Nicholas suggests to first-time climbers. “Let climbing teach you how to move,” he says. “I feel that we’re all born to climb – it’s just a matter of good climbers or bad climbers, but we all can climb.”

Even people with a fear of heights? The idea of free-falling the three metres of a bouldering wall onto foam pads, or letting go on an even higher climbing wall, sets off alarm bells in my head.

But Nicholas believes that climbing is actually a good practice to conquer a fear of heights. He’s seen it in other climbers.

“The more they practice, the more they realise that their fear is a mental barrier they put for themselves.”

In climbing, the toughest wall you need to overcome is the one you build for yourself. 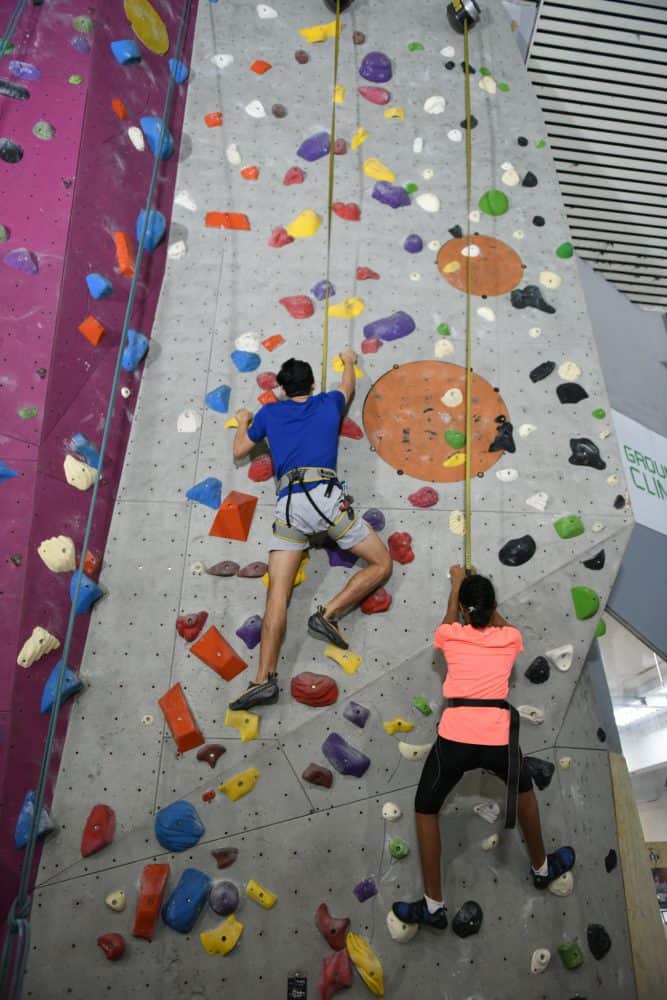 If you need a bigger push, look around at the other climbers. There were kids around us who looked no more than eight climbing up to the very top, swift and confident.

Suddenly I wondered if the other climbers and trainers there were watching me climb, thinking why on earth this able-bodied young woman was so weak. But I couldn’t be further from the truth.

No One Climbs Alone

Looking around the gym, it’s clear that judgement has no place in climbing. Although the actual climbing is often performed solo, climbing is a social sport fuelled by a strong support system. Everyone here had a friend or trainer with them, watching over them and prompting them on the next hold they should take.

It’s this camaraderie that Nicholas is most eager to share about with me. 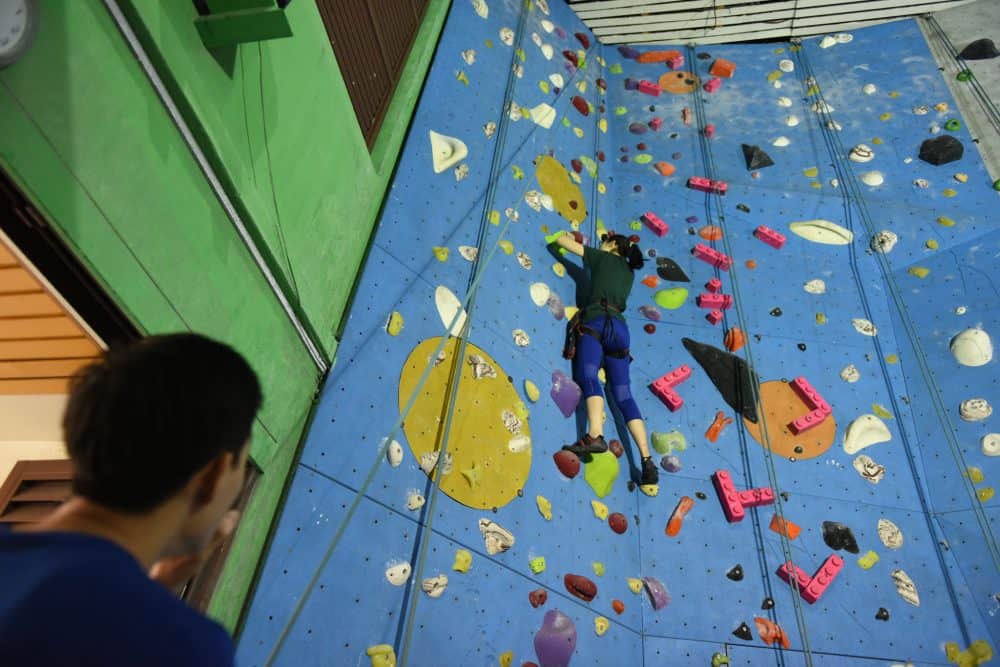 “What attracted me to climbing was the people,” he says. “When I got to know climbing, people were all very supportive and friendly.”

It was a big contrast to the more aggressive basketball he had played previously. Can’t figure out how to complete a route? The climbers around are always willing to help.

“Everyone is climbing at their own standard,” Nicholas adds. “They’re not fighting against anyone.” 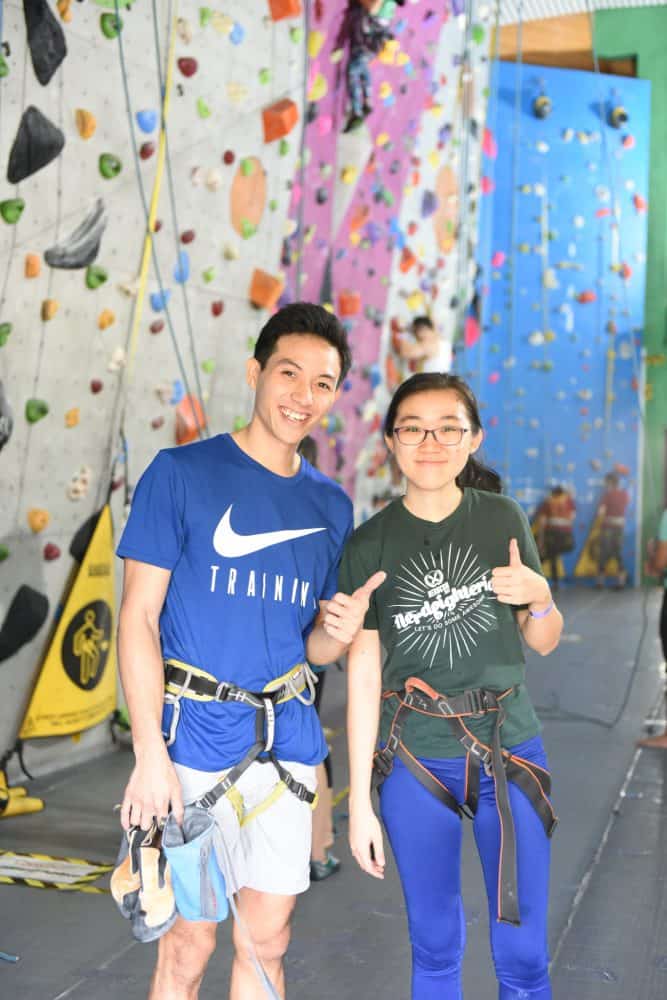 Competitions turn up the intensity and pressure, but Nicholas believes it’s a common misconception that climbing is very intense and tough.

The graded climbing routes allow one to adapt their body to the wall, before starting to advance at their own pace. That’s why climbing attracts kids as young as four, to people in their 70s.

“If you can climb a ladder, you can do rock climbing,” he says with certainty. “It’s all about putting your feet at the right places.”

I must admit – I had my own doubts. But it turns out that before he got this smooth in climbing, he had a rocky start too.

Started From The Bottom 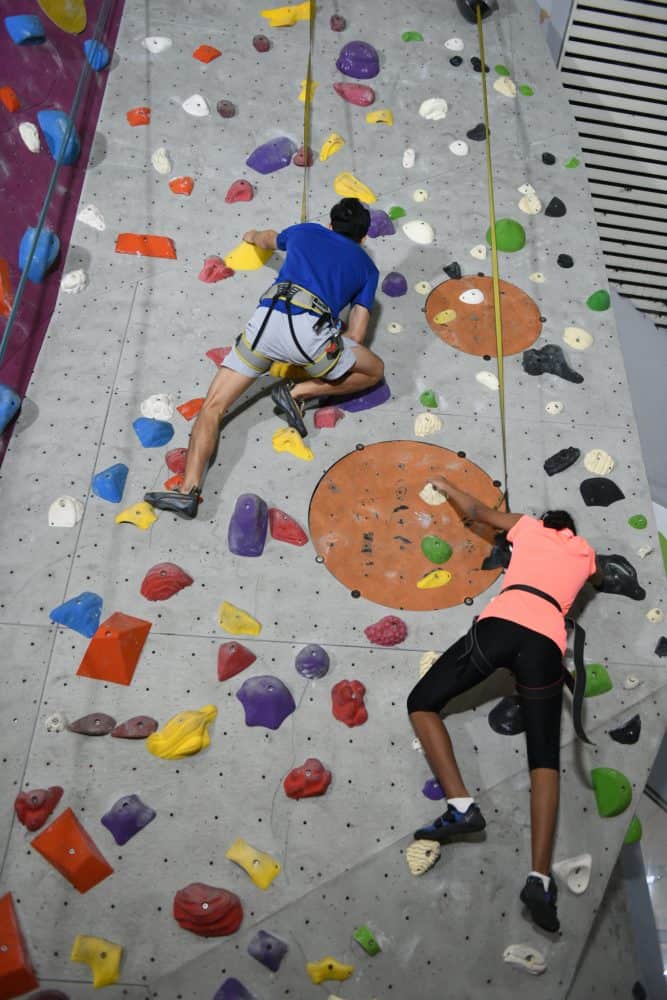 His fingers hurt; he also struggled to trust his feet, and he felt tired very quickly.

I tested this theory myself by getting back onto the wall again.

The next few climbs, I put the comments Nicholas gave me into practice. I tried to push myself up with my legs and take wider steps to help me get into a more comfortable balance. Most of all, I tried to envision myself climbing higher and higher each time. 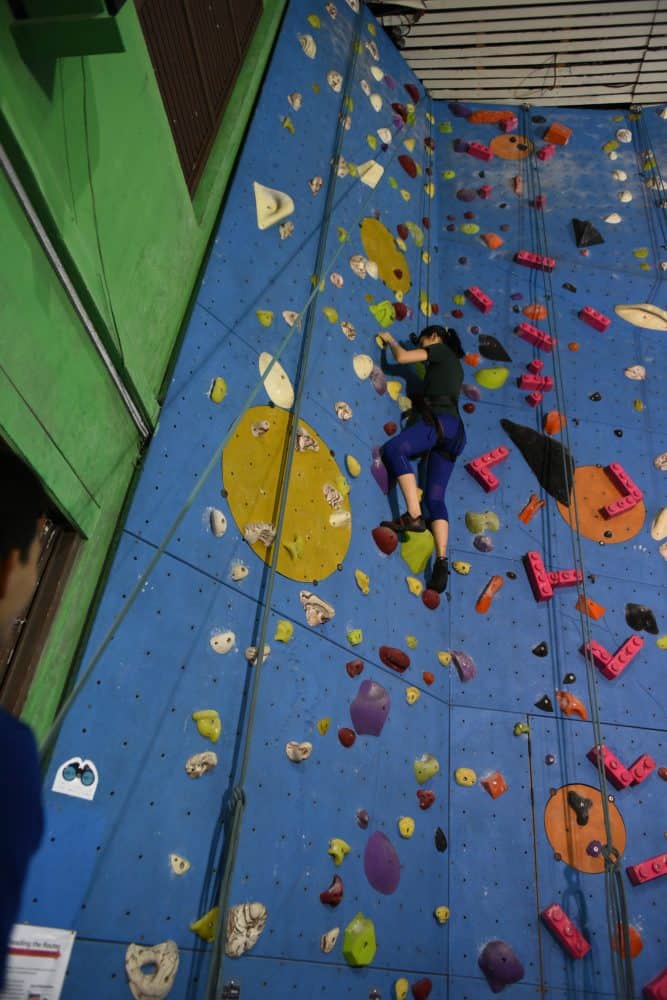 For Nicholas, at the heart of climbing is trying to solve the puzzle to reach the top. That mind-body training makes climbing a more fun and dynamic workout, compared to running or weightlifting.

“It tests your flexibility – whether you can bring your feet high enough or wide enough – it tests your coordination, your reflexes and problem-solving.”

These skills are perhaps most targeted in bouldering. Without the restriction of a harness and rope, you have more freedom to get creative as you figure out how to complete a route, much like dancing. 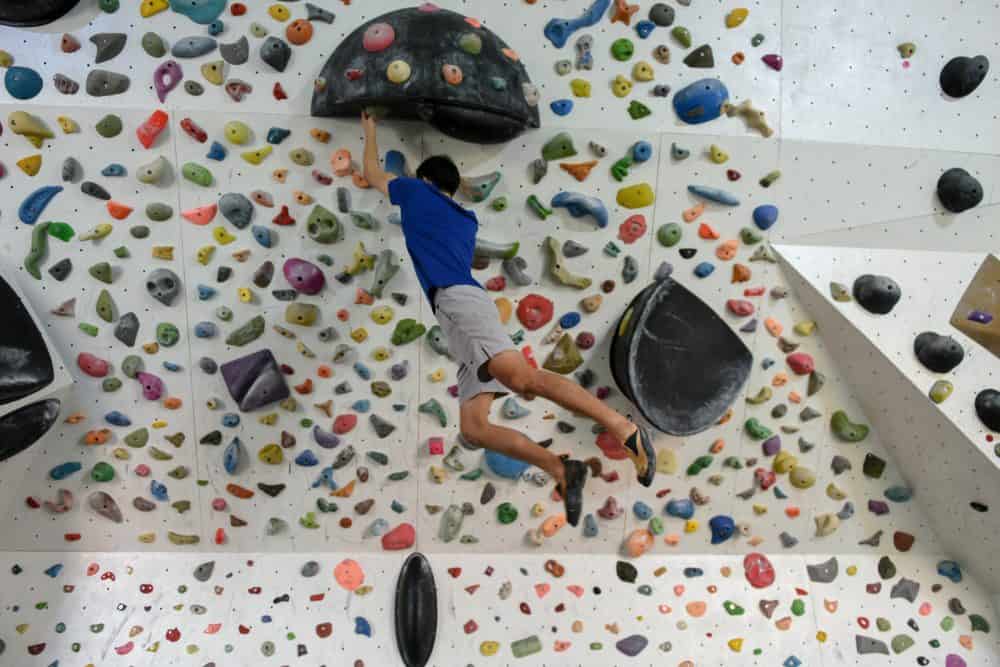 That also means, though, that falling is much more a part of bouldering than roped climbing. Yet, falling shouldn’t be a dispiriting experience; in fact, it’s what Nicholas cherishes the most about the sport.

“Climbing taught me a lot of important life lessons, especially in bouldering,” he shares. “Most of the time you fall, and you fall more than you finish the route. But that’s just like life, right?”

Climbing instils this tenacious mindset so deep in his character and spirit, he transfers it to his perseverance in his multiple business ventures as an entrepreneur. 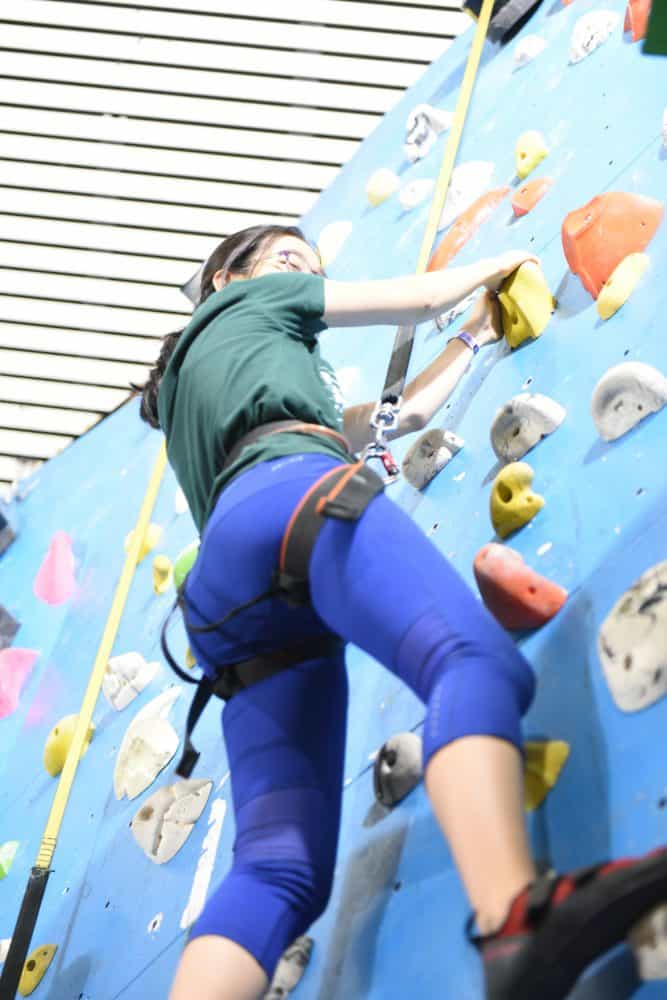 Nicholas’s optimism was rubbing off on me. Despite my fears, I was climbing a panel higher each time at the auto-belay wall. Suddenly, he told me the next climb is when I would reach the top. He has the coach’s sense, he said.

Immediately, I dismissed the idea.

My arms were aching, and the climb felt like ages. When Nicholas yelled up that I had one last hold left, I took a deep breath and lunged for it, eager to get it over with.

But it wasn’t over yet; now I had to let go and drop a long way down. Taking a leap of faith, I let go and held onto the rope for dear life – until I landed sprawled out on my back.

Staring up at the top where I’d actually reached, I felt a sense of accomplishment. I can certainly see why Nicholas and other climbers get a thrill out of the sport.

I probably did the simplest route, but right then and there, I felt like I could take on the world. And if I told the other climbers, I know they would cheer me on.