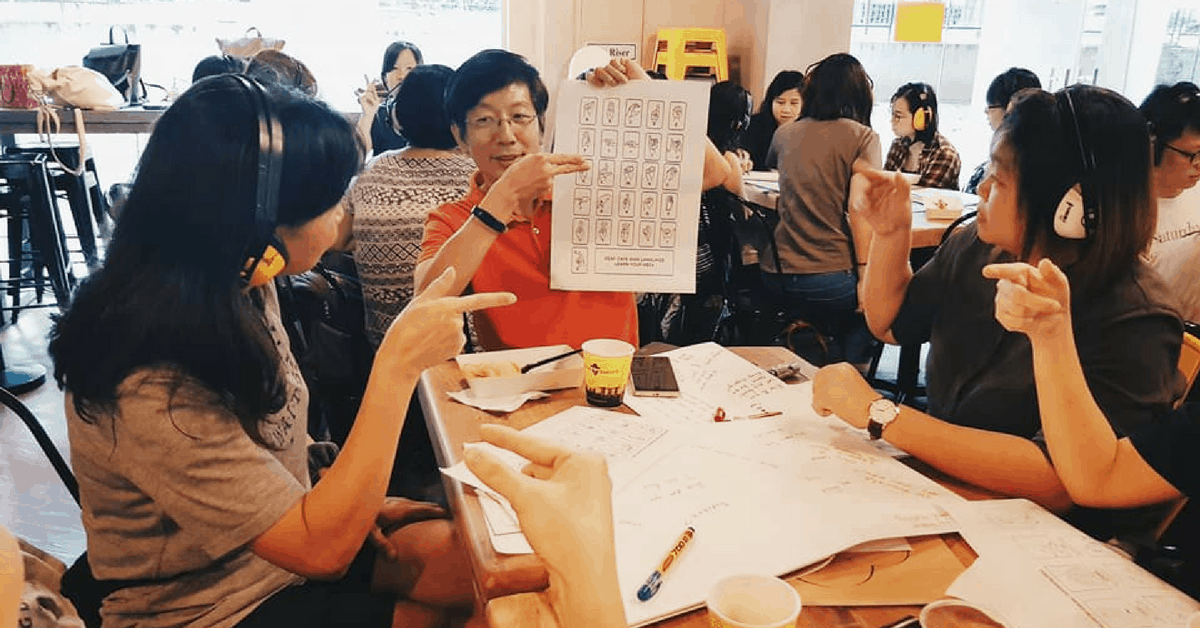 I came to know about Etch Empathy by chance after seeing a Facebook post publicising their Deaf Café event held at Coffee Bandits.

After traipsing the web, I realised that this wasn’t a one-off event – Etch Empathy is a non-profit social enterprise whose founding was fostered out of a desire for society to understand vulnerable communities.

Other than the Deaf Café, they have held similar events to allow Singaporeans to put themselves in the shoes of various communities – these include the poor, elderly, and blind.

I decided to reach out to Mr Aaron Yeoh, the CEO and co-founder of Etch Empathy, to find out more.

Trained in engineering, Mr Aaron Yeoh had no prior career experience in the social work sector prior to setting up Etch Empathy.However, since 2009, he has been involved in pro bono community and youth work during his spare time.

In the previous financial crisis, he considered a career switch, but the opportunity to switch to a career related to his pro bono work experience arose only in 2013 – when Etch Empathy was born.

This aims to help them build empathy towards the marginalised, so that there can be less prejudice. In this way, better service and empowerment can be given to the marginalised communities to move up the social ladder.

Mr Yeoh adds that the fulfilment he finds in his work comes from the opportunity to work alongside marginalised individuals, and the joint advocacy work done with them through the simulation exercises Etch Empathy conducts.

Though cynics may be critical of simulation experiences, Mr Yeoh tells me that he has yet to face backlash or criticism. This is because the main partners of his work are the people who value and benefit from the work that is done.

On browsing their website, I realise that Etch Empathy’s mission is “cultivating empathy for poverty eradication” – my attention is immediately drawn to the completeness denoted in the phrase.

A cynic at heart, I ask Mr Yeoh if he thinks this is realistically possible – he tells me that he believes poverty eradication is possible, if the mindset of all stakeholders involved are correct.

Yet, he also acknowledges that our world is not designed to cultivate empathy. He quotes former US President Barack Obama to illustrate this point:

“We live in a culture that discourages empathy. A culture that too often tells us our principle goal in life is to be rich, thin, young, famous, safe, and entertained.”

He evokes a strong idealism towards the cultivation of empathy – I am heartened at his passion for his work; yet I can’t help wondering if he is a tad too idealistic.

In turn, society  has to be ready to provide for the individual’s needs, while also equipping him with knowledge on how to provide for himself at the same time.

He explains that having empathy for others encompasses seeing life through their perspectives – feeling for and listening to them. In this light, he notes the difficulty in having empathy for someone else without experiencing what they go through.

However, he also shares his belief that human beings are born to have empathy – the reason we do not prioritise showing empathy is the result of getting lost in the demands of work, lifestyle, culture or societal expectations.

His most memorable overseas experience to date is the Laos Project, where three teams of volunteers from Youth Corps Singapore collaborated with Etch Empathy to go over to Laos on three different occasions. They spent ten days of community service in a school for the blind.

In this collaboration, they introduced blind futsal after noting that some of the kids had an interest in kicking balls around, even though school’s compound was uneven.

They first laid new grounds to even the grounds out then introduced futsal, teaching the children some basic rules and game play.

Our journey of serving the visually impair kids in Vientiane, Laos 🙂

The teams provided the children with special balls which had bells in them, so that the children could use their hearing to chase for the ball.

On their most recent trip, the teams made the children a portable goal post so that they would know where to shoot, even though the children might not be able to see clearly.

Most recently, they were informed that four children from the blind school had been selected to play regularly with the adults in the Laos National Blind Futsal Team.

This was very memorable for Mr Yeoh, for whom recognises that the seemingly insignificant things that the teams gave the children, has helped to spark passion and ignite talent in the visually impaired children.

After enquiring with existing culinary schools, he realised that none were able to take the visually impaired in as trainees.

This spurred Etch Empathy to start a pilot with resources which they could find online. The pilot project caught the attention of funders, and they are currently in the final stage of securing more funding and collaboration to scale up the project.

My last question for him expresses the cynicism that these simulation activities are insufficient to illustrate the full extent of experiencing the simulated conditions. To that, he agrees that simulations should serve only as a starting point.

Simulations, to him, serve only to plant the seed of empathy – as a trigger on an individual’s curiosity to find out more about the situation.

He hopes these activities would trigger the compassionate side of Singaporeans, mobilising more hands on deck to collectively build the aspirations and desires for and with the respective vulnerable communities.