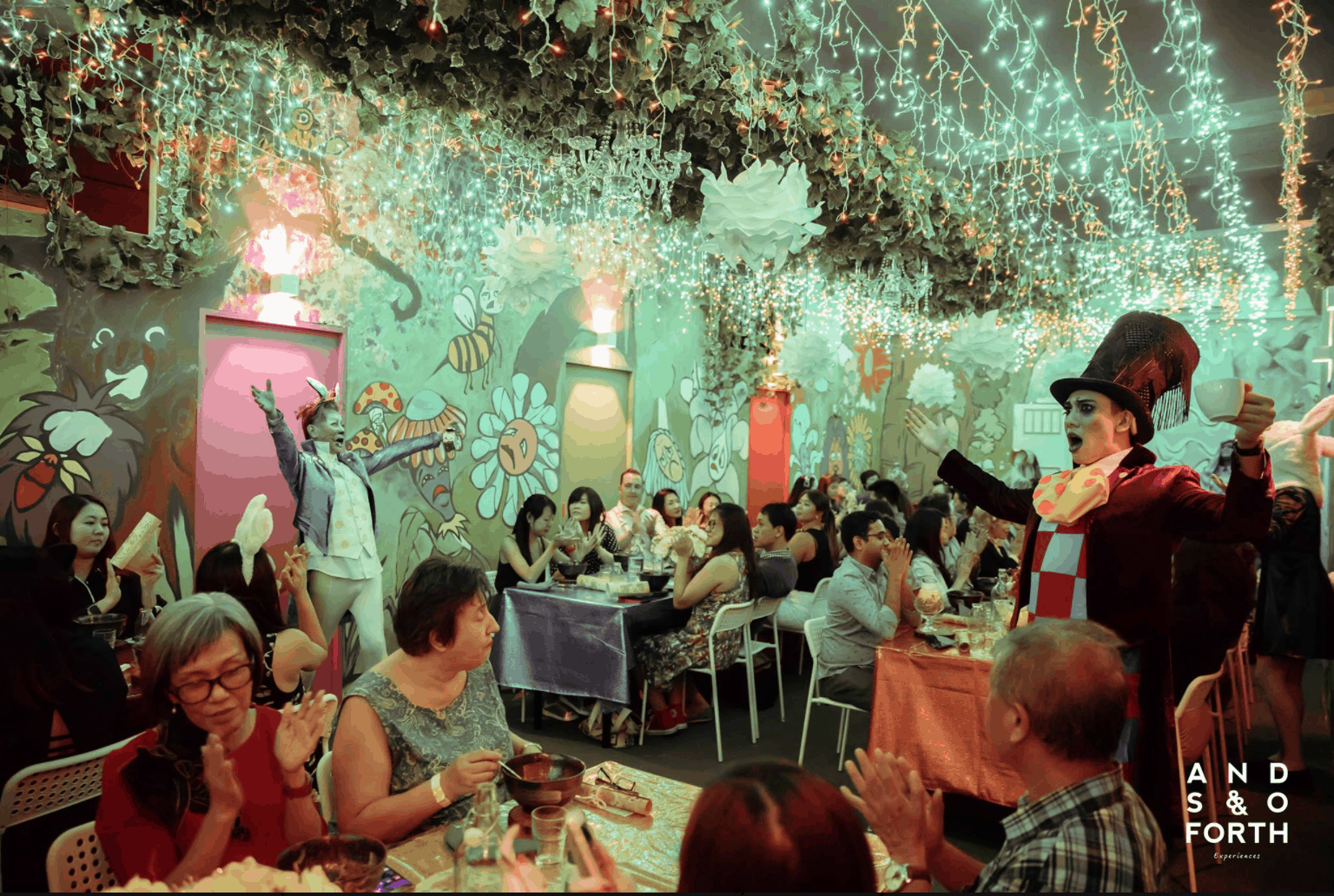 Think jaded fairy tale princesses, brusque fairies popping in to serve you grub and potions; ball pits doubling as underwater realms. But this incredibly immersive experience is actually 17 tried and tested concepts in the making.

I speak to one of the masterminds behind ANDSOFORTH, co-founder Emily Png on what sparked the idea of a nomadic restaurant, and what the future holds for this trail-blazing crew:

To put it plainly, ANDSOFORTH was born out of boredom with the local dating scene. As co-founders Emily and Stuart discovered: “One year into our relationship and we had run out of things to do while dating.”

The couple first discovered the underground F&B scene during their visit to London in 2013. Emily recalls witnessing their favourite organiser Gingerline, in action.

“They incorporated immersive set designs, actors, and dining and it was brilliant.”

“After discovering dinner theatre, we did some research and were like, ‘Hey, we can do this. We need to make Singapore more interesting, plus it’ll give couples like us unconventional fun stuff to do.’”

One year of sold-out shows later, they realised what they had to offer resonated with local audiences.

Stuart quit his job as an engineer and manager at Beep studios and Emily left her position as a fashion merchandiser at Prada to focus on refining the brand.

Now they’ve hit a comfortable stride. Stuart invents the concepts and pens their scripts, and Emily takes care of the financial matters, occasionally giving Stuart feedback on his ideas. If you ask around, you could even spot one or both of the co-founders in the height of the action each night, whipping up magic potions behind the bar.

The Mayhem Behind The Magic

That’s not to say the process has become simple. “We create a mood board, a script, set design, sound design, music, lighting, casting, actors, rehearsal, directing, food, menu planning, cocktails, operations, costume design and lots more. But this is essentially what needs to happen before the execution of a concept.”

I asked if they found the unique challenges of being a pop-up restaurant an issue, but Emily seemed unfazed. “Yes, set designers, chefs, illustrators etc. are hard to come by, but we’ve got a pretty reliable team as of now and they are amazing.”

On the fear of them running low on ideas and inspiration she quipped:

“I think stories need to be told and retold. If there were no more stories in the world then yes, we would run out of themes.”

Thankfully, there’s always Netflix. “[Netflix is] our point of reference into the relevant trending topics being discussed in the world. We spot trends. For example, The Imaginarium of Disco David was about a man (David) who was trying to save disco from the new hip-hop and breakdancing trends that were taking over.”

“Throughout the 5 rooms you meet his crew, and they get you to learn disco moves etc. What some people might realise, is that the people serving the food are wearing gowns. They are in fact nurses and yes, you are most definitely in a psych ward where Disco David and his crew are patients.”

This concept was crafted “during the period where Netflix released shows like The Get Down and Glow—70s, retro-influenced shows.” Whether this could spell a Stranger Things-inspired journey to the upside-down in future is something we’ll keep an eye out for.

In the meantime, they’ve set their sights on taking the ANDSOFORTH experience beyond local shores.

The dream is to “do it on a larger scale, in a bigger location… to reach a critical mass market demand in Singapore and South East Asia and to elevate the arts and entertainment here.”

Emily’s advice for other entrepreneurs looking to break the mould and make it in the local scene?

“Go big or go home. If you fail and feel like giving up, don’t. Learn, improve, adapt, and keep at it.”

Here’s hoping they achieve their goals, live happily ever after, and so forth.