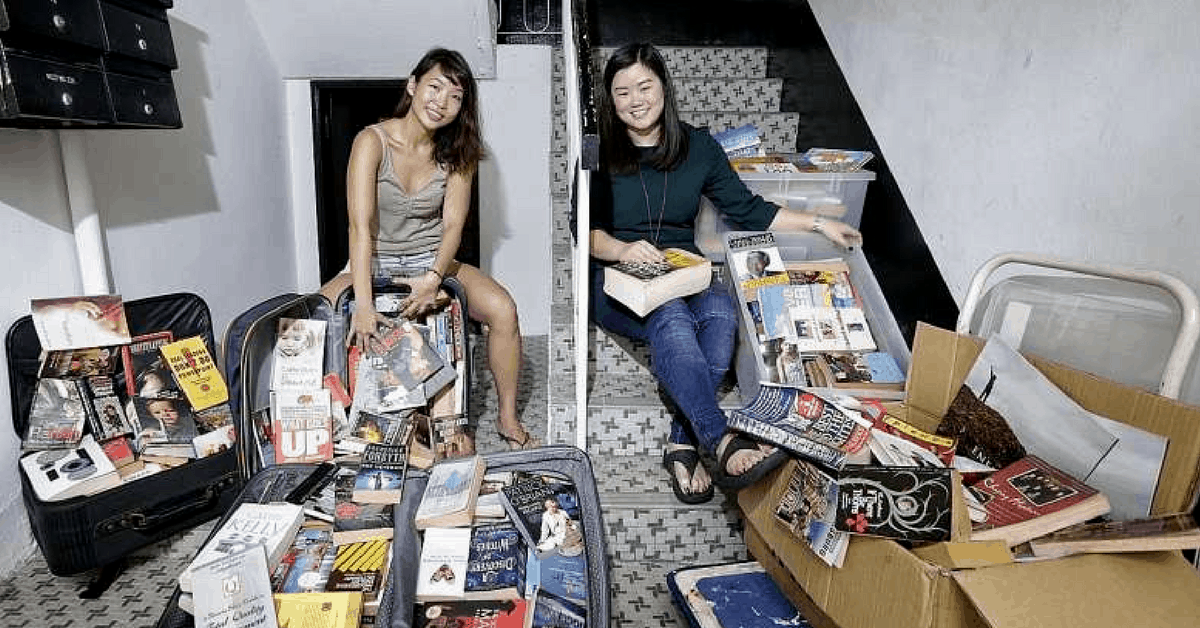 Established in 2011, Books & Beer is the passion project of Melissa Low and Eileen Lee – the duo first met while volunteering with the local environmental scene back in 2009.

It all started when Melissa, currently a Research Fellow doing climate change research at the National University of Singapore, had organised a book swap at her home for friends to refresh their reading list – this was in January 2011. She offered a crate of beer as an incentive for the uninterested – hence, “Books & Beer”.

Eileen, who currently does market development work for emerging markets was then at the cusp of graduating from university. She realised that it was increasingly difficult to meet new, like-minded friends.

Thus, “Books & Beer” in a public setting seemed like a good potential solution. The first session was organised at the now defunct Post-Museum and attended by some twenty pax – consisting of a mix of friends and their friends.

The session was well-received, which motivated the duo to organize subsequent sessions – in fact, Books & Beer turns seven this June!

Explaining the rationale behind the book swap, they tell me:

“Everyone’s free to come and go as they please, but we always encourage attendees to linger – the books on the shelves get cycled this way – a second or third walk through the shelves may turn up a book that catches one’s fancy.” 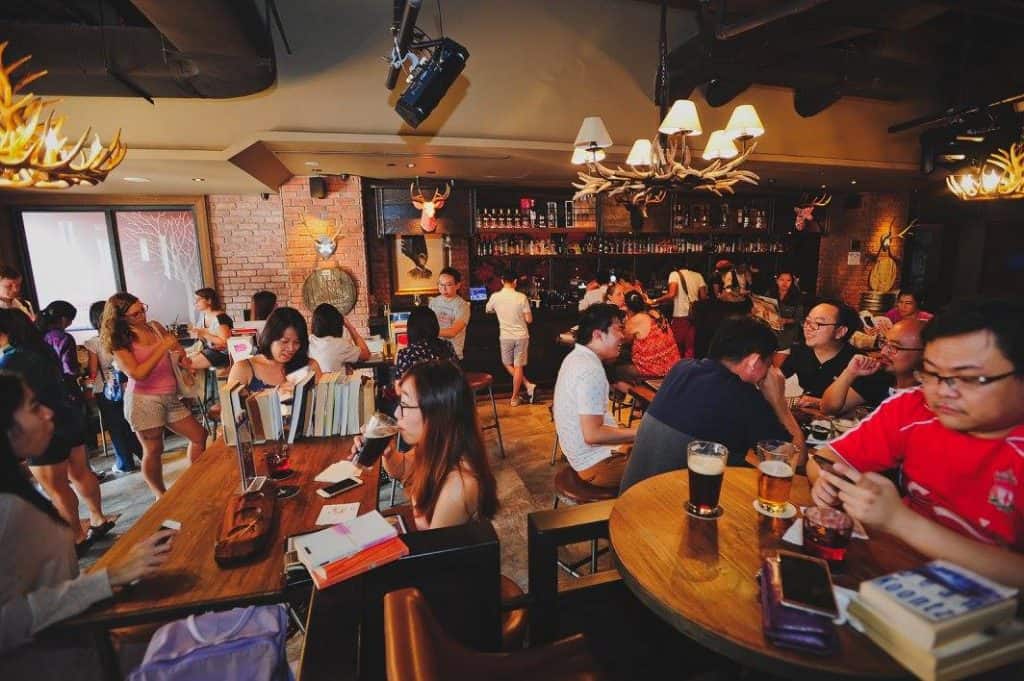 When I ask them what a typical book swap event is like, they explain,

“Books & Beer is essentially a not-for-profit travelling book swap, with an ice-cold twist! It is organised once every two months, and typically takes place over three hours during a weekend, at a centrally-located F&B venue.”

“We cater to a rolling crowd of around 60 – 80 pax per session, who are largely young working adults between the ages of 25 – 40, but also receive a handful of younger and older attendees. Attendees can bring up to ten books for swapping.”

“Despite our Books & Beer moniker, it has not worked against us – we receive plenty of Muslim friends, and the bulk of attendees prefer to go with non-alcoholic beverages.” 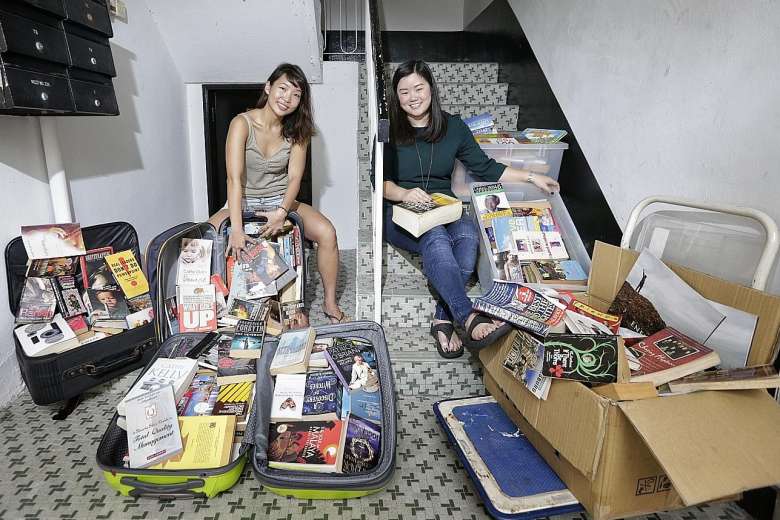 I mention to the ladies that while I see the merits of a book swap – I love reading when I can – it might seem counterintuitive to organize a book swap.

After all, in this era of social media, the majority of people spend more time on Facebook, Instagram, and other modes of social media – compared to the good old hardcopy novel.

In fact, they have had people suggest they use apps to facilitate the swaps instead. This way, users can instantly pick out books they would like to swap – and meet up at their personal convenience to do so.

Yet, for the duo, this is why the physicality of Books & Beer matters “more than ever.”

They put it this way –

“We are not just a platform for a book to exchange hands; we are part of a process that creates opportunities for face-to-face human interaction, for new genres and books to be considered, and alternative venues to be sampled.” 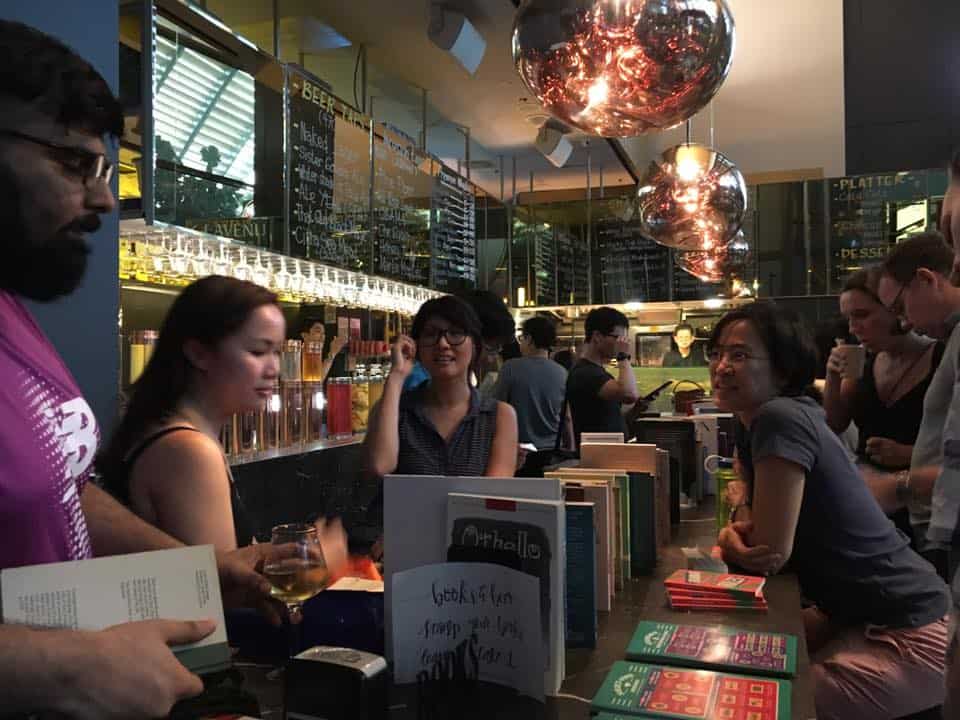 Having been on a seven-year journey, which Eileen describes as “literally got a primary school kid on our hands”, surely the duo have memorable encounters of their own to share?

For Melissa, this is the sense of community in the atmosphere at a Books & Beer session.

“Because we’re always moving around to new locations and bars, it’s heartening when we see familiar faces and regulars attending our events.”

“It goes to show that it’s not the place that makes the event, but the people and the experience they receive by attending this type of book swap event with others who are like-minded”, she says.

In addition, she feels that seeing others run their own swaps and witnessing how the book swap landscape has flourished in Singapore over the last few years “is also heartening,” and names Books & Treats as an example of an event she is heartened by.

Lastly, Melissa treasures the moments when “people reach out to (them) to offer their time and creative talent” – Books & Beer was able to redesign their logo with the generosity of the folks at Brandtative, and launched their new logo this January – Melissa describes this as “a bittersweet moment” for Books & Beer.

On the other hand, for Eileen “watching some of (their) regulars get married, have babies, and still find time to come by Books & Beer once in awhile” makes the journey memorable.

In addition, “witnessing newly-acquainted friends head off for dinner together after Books & Beer” is also part of the Books & Beer experience that she treasures.

Joys And Accomplishments On The Journey 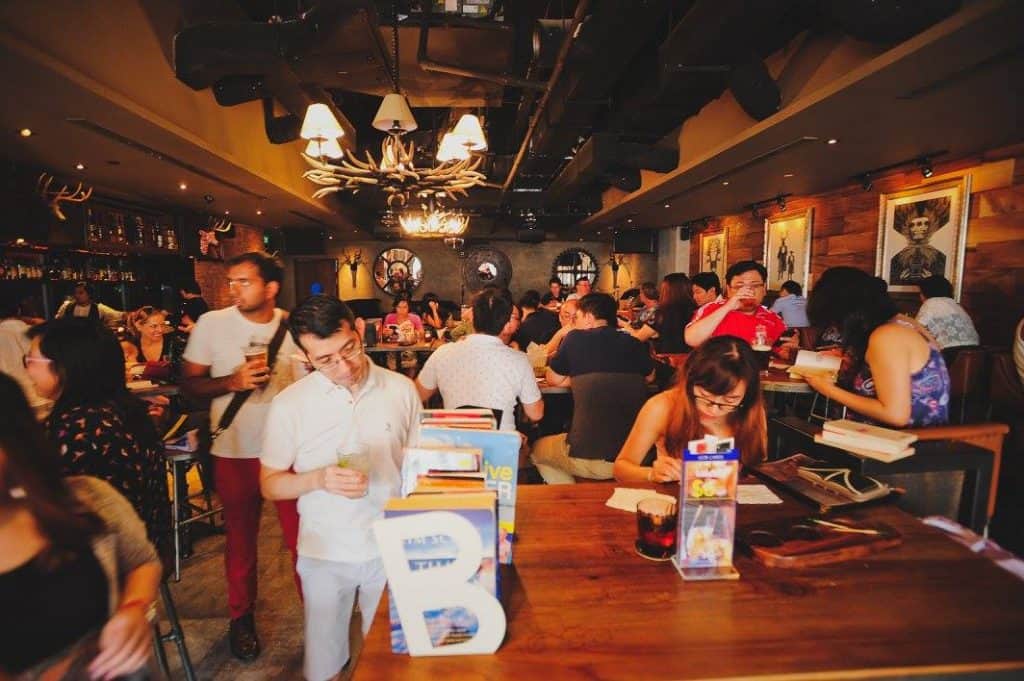 Back in 2016, Books & Beer was invited to speak on a panel at the 7th Leaders in Urban Governance Programme (LUGP) organized by the Ministry of National Development on “The Emergence of the Sharing Economy and Implications on Singapore” alongside Zero Waste SG, the Sharing Economy Association of Singapore, Airbnb, and Uber.

“To be considered alongside these heavyweights in the sharing economy in Singapore was a great honour!”

For Eileen, she remains amazed “how Books & Beer was conceived out of sheer environment-friendliness and boy-craziness, (but has now become) an amazing community of over 5,000 (who) has come together and grown with (them) on this journey.

“(This) support has kept us going. That’s really our biggest achievement I think – this sustained engagement and community building we’ve managed to pull off.”

The Impact Of A Book 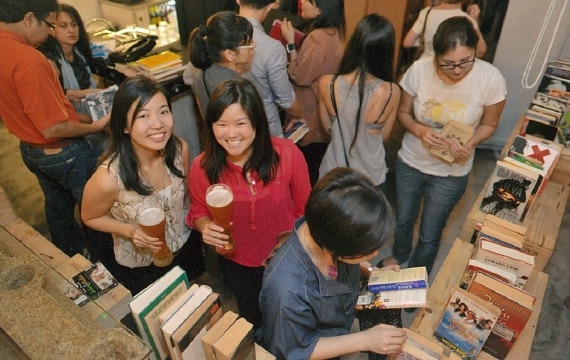 The duo name Arthur Golden’s Memoirs of a Geisha and V.C Andrew’s Flowers in the Attic as books that have changed their lives – the former for Melissa, the latter for Eileen.

Melissa says, “(Memoirs of a Geisha) was the first book I remember finding in my dad’s bookshelf. It was given to him by an old friend and had a note written into the pages. It was not so much the content of the book itself but the gesture of giving books as gifts, which I still do today.”

Eileen was ten when she thumbed through her English teacher’s copy of Flowers in the Attic.

Putting this into context, Eileen says, “I was reading voraciously then, and well beyond my age, so I think she didn’t think much of it when I asked to borrow it. She soon had a whole class of ten-year-old girls swapping the series, which carried themes of sexuality and incest, and this obviously didn’t go down too well. There was a small uproar.”

Yet, this also led Eileen to realise, for the first time in her life, how a book can make an impact – the characters and story of a book live beyond its pages.

Not Worth The Hype?

Both Melissa and Eileen tell me they would readily pick the hardcopy version of their titles of choice.  Says Melissa, “My friends bought me a Kindle a few years back, and I use it when I travel sometimes but nothing beats the materiality of a real book!”

Eileen concurs – “Call me old-school, but I’ll pick a physical book any day. I like the heft of a book and the feel of paper between my fingers, that crackle with each turn of the page, figuring out the best angle to read at without creasing its spine. (I like even) the smell of (their) yellowed pages! It makes reading all that more real – if it’s on an electronic device, I’m just browsing.”

Knowing I have two bookish interviewees on hand, I figure it is also worth asking them for their opinions on books that are highly-raved about, but which they feel are not worth the hype.

Admitting that she had to check her Goodreads account for reviews to answer this question, Melissa tells me that her choice would be Ajax Penumbra 1969 – the sequel to Mr Penumbra’s 24-Hour Bookstore.

“The story was really thin. Plus, I enjoyed the first book so much I’d been so excited about this book. Totally anti-climactic,” she says.

For Eileen, this would be Paulo Coelho’s The Alchemist.

Yet, she puts a caveat –

“I enjoy Coelho’s books and writing in general, and I’m a staunch believer in The Secret. But I’m a little disappointed by how simplistic and one-dimensional The Alchemist is and felt there was too much preach. It’s not trashy for sure, but there are too many who swear this is their new-age Bible and tote dog-eared, coffee-coffee stained copies around.”

Having read The Alchemist once about a decade ago, it almost makes me want to re-read the book again, to confirm if I concur with the sentiment!

Books & Beer share that they have submitted a seed grant proposal to the National Arts Council earlier this year – they hope to secure funding for a full-time staff and a small budget.

In addition, they want to further grow their reach, contributing to building and strengthening a reading culture in Singapore – they aim to do so by running more regular swaps and bringing Books & Beer to the heartlands and corporates.

The duo also have plans to organise more book-related activities such as book-themed beer brewing classes, and screenings of book-to-film adaptations – these will create opportunities for increased exposure to books and reading via peripheral activities, and also encourage wider participation across various audiences.

Despite their ambitious dreams, they remain hopeful but realistic.

“While it is all very exciting, Books & Beer is a two-women team, and both of us hold full-time jobs on the side which require a fair bit of travel. We’ve also been funding a lot of what we do out of our own pockets, and will need to achieve greater financial sustainability to do more,” they say.

To end, I ask the ladies to pick between books or beer, just to throw in a fun-fact question. They unanimously choose books over beer.

For Eileen, this is because she describes herself to be “more of a whisky and gin person.”

Yet, for Melissa, although she enjoys beer, she chooses books because “it’s the essence of the swap, and books have been a constant in (her) life for as long as (she) can remember.”