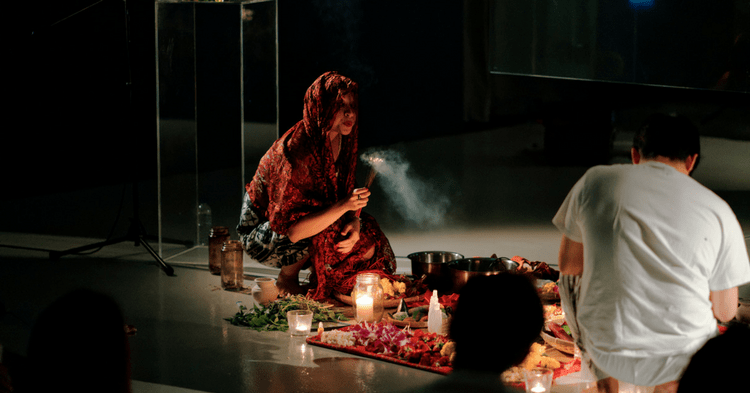 When thinking about witchcraft, one’s mind usually drifts to spells, cauldrons, broomsticks, crooked noses, and pointy hats. Informed by an anglo-centric and westernised world of popular culture and media, the image of witchcraft and magic would probably be associated with what they’ve seen on television or read in books growing up.

I know I have.

Which is why when I met Zarina Muhammad at one of her shows, I began to grow interested in the history of witchcraft and magic within my home of Singapore and Southeast Asia.

Apart from the over-stigmatised spiritual caricatures like the bomoh(witch doctor) with coconuts, the Pontianak, or other similar figures and spirits, how many of us have ever wondered about the history of witchcraft and magic within this island? Or even had the opportunity to think about it?

The history and the cultures that intersect with witchcraft and magic in this country seem to have been systematically erased. And if not, largely forgotten by the inhabitants of what was once considered a spiritual land.

Zarina, or Za, is an artist, a writer and researcher on the histories of magic, myth and mysticism in Southeast Asia. She is also a lecturer at Lasalle College of the Arts.

Her work involves combining her knowledge of magic and witchcraft with art in intricate lecture-performance pieces. Her intention is not only to showcase the rich Southeast Asian/Malayan history and culture of Singapore, but to also highlight the complexities that outline and undermine them.

Being an audience member in the space of her performance feels like what I can only describe simply as a conscious awakening and collision of my spiritual self with my curious being.

It is emotional, informational, interactive, documentative, and spiritually invasive; all at once overpowering, but in the most illuminating of ways.

There were questions that arose upon meeting her, and my inquisitive mind was determined to get them answered. Following a brief chat, Zarina said yes to talking to me again, only with the agreement that the individuals that have shared and spread knowledge through her, otherworldly or not, be honoured. I hereby promise to do so.

So, What Exactly Is Witchcraft And Magic?

Zarina takes her work incredibly seriously, and understandably so. The subject matter she chooses to address is at times harrowing, but can, for the most part, be extremely frustrating.

She explains that there are so many misrepresentations of what the spiritual realm is, what it comprises of, and how it is being translated for consumption and knowledge. She works with various artists in a variety of mediums to try to expand the definition of what witchcraft and magic can be in the context of Singapore.

“[A]rt is but just one of the ways to talk back to, retort, and engage in a dialogue with history […] In my work, I’m also interested in the possibilities and potential to engage with, shed light, and create conversation on the layers of histories and narratives related to any site or space.”

Even the language itself attributed to the very realm of which she studies remains to be questioned.

It is common for people to align themselves with the words “witchcraft” and “magic” as signifiers of the spiritual. But according to Za, these words do not possess translatability across cultures, therefore creating a disconnect in the way we interpret the mystical and spiritual in Southeast Asia.

There is also a generally misguided narrative that nothing of great importance took place on Singaporean soil before Stamford Raffles arrived in 1819. And of course, if one thinks in one-dimensional circumstances, then yes.

“[But] I would like to dispel that myth, and hopefully enable a remembering of all who have come before us, and recall some of the fascinating figures from early modern, pre-colonial Southeast Asia.”

Zarina continues to work to dispel the illusion of language as an ultimate and the myth of the “fishing village”, amongst others, through her artistic interactions with witchcraft, magic, and connecting with the many spiritual sites and literal land that exist around us.

Girls and Ghosts in Trees

She is currently working on an ongoing project titled “Girls and Ghosts in Trees”, which is the product of researching key figures such as Nyai Roro Kidul, Rangda, Ken Dedes, Prajnaparamita to name a few, and includes fieldwork to the sites and places associated with these figures/stories.

During her performance, offerings are made to the female spirits from the Nusantara. The intention of which is set to tackle the unresolved through sharing stories and revisiting historical texts and sites, all with an artistic touch.

With the use of audience participation, interventions, and disruptions from collaborators, she wants to open up a space for a more nuanced interaction between our bodies and what we know to be absolute truth.

Or perhaps what we initially held as an outlet for truth as opposed to say, a spiritual connection with the history of a land that has been rewritten.

This way, members of the audience are forced to think about all the terms and ideas that are mentioned and how they might have perceived witchcraft/magic and witches before; how there are terrible misrepresentations within those terms in relation to history, geography, and culture.

Zarina explains that the one thing she wishes audience members and viewers take away from her piece is that it may be a spark, or an entry point for discussing the many versions of history that have been withheld, the various instances of tradition, and the forgotten memories in the context of contemporary Singapore and the many communities that still live here.

“My work is as much about inviting speculation and open-ended interpretation as it is about considering the counterpoints, extended potentialities and possible antidotes to dangerous and limiting stereotypes, as well as single stories.”