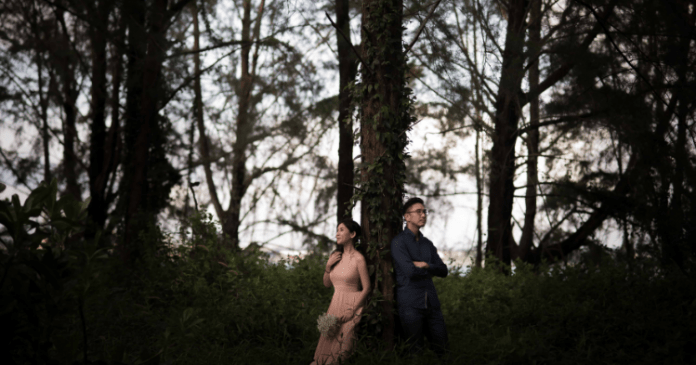 For most couples, planning a wedding is a tedious affair.

Adding to that conundrum would be the many wedding photography studios available in our little red dot. Yet, Leon Huang and Petrina Ng of A Merry Moment differ from the rest.

Although the studio was only established in June 2016, the couple has garnered a steady stream of clients, already having a packed schedule for the rest of the year.

Petrina fondly remembers being engaged by an entire group of friends for their respective weddings, one couple after the next. The secret behind their success might just be their chemistry as a couple, having been in a relationship for close to ten years now.

“When we meet other couples, they feel our synergy and like the fact that we’re in sync. As a couple ourselves, we understand where they’re coming from,” Petrina says.

She goes on to highlight that Leon and her have similar visual styles and are consistent in the service they provide, giving them an edge over their competitors. 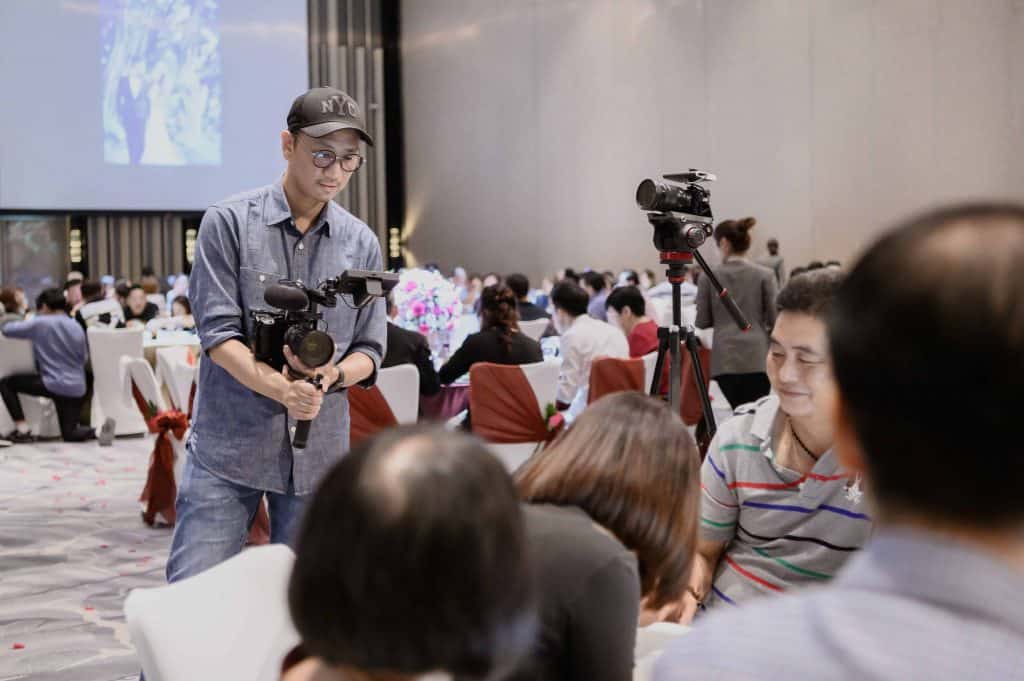 Not content with just photography and videography, the duo had to double up as wedding planners on occasion, especially when couples who engage them do not hire one.

On the flip side, Leon and Petrina had to temper the expectations of overzealous clients, advising them regarding wedding customs and traditions or even for trivial matters such as the type of confetti used.

The amount of preparation required is largely overlooked by the general public and the couple agreed that things are more challenging before the wedding rather than on the actual day itself.

Leon says, “we prepare so much because it benefits everyone if the actual day runs smoothly.”

The challenges faced are mostly technical and logistical rather than clients being demanding or unreasonable. Leon cited a situation where the wedding highlights video failed to transfer to the hotel ballroom’s laptop due to a faulty USB port.

By the time the problem was resolved, it was ten minutes past schedule. “This is one of the challenges we face. You never know what to expect,” Petrina chimed in.

Another challenge the pair face regularly would be lighting, be it at the wedding banquet’s venue or in the couple’s respective homes. “Sometimes it’s a bit dark, sometimes the colour is orange-y or green-ish,” Leon says.

This dilemma was more than apparent for a wedding held at the S.E.A Aquarium in Resorts World Sentosa.

Petrina was awed by the beauty of the venue but lamented that it was dark and made everything look blue. “In order for the photos to be nice, a lot of work had to be done to make sure everybody’s skin tone looked decent and not blue-ish”, she says.

Even though the venue was tricky for her as a photographer, she was glad that the couple enjoyed themselves and said that the atmosphere was great as well. 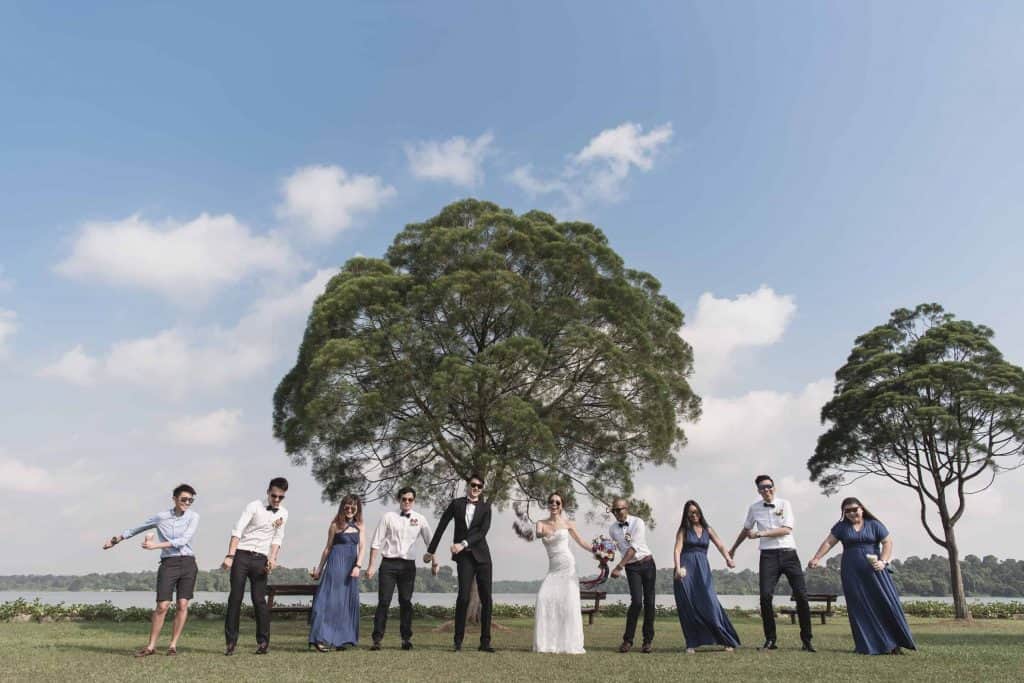 Other venues that regularly prove to be a hassle for Leon and Petrina would be older establishments due to the shoddy lighting present. The poor sound systems in these venues are bugbears for the duo as well, provided they have one in the first place.

“Sometimes, there won’t be a proper audio guy,” Leon says.

The topic of venues was frequently brought up and a memorable assignment that Leon and Petrina had a year ago took them to Bali.

Lady Luck was the MVP for that assignment, from miraculously granting Leon and Petrina clear skies for the photographs and videos despite Mount Agung’s eruption, to the couple’s family and friends having the foresight to take a vacation in the Indonesian province a week before the wedding.

Petrina added that the couple was fated to meet, saying: “They’re from China, got to know each other in Canada, ended up in Singapore together because they’re studying here and had their wedding in Bali.”

The many challenges and weddings that Leon and Petrina have experienced during the past three years establishing A Merry Moment have reinforced how much they enjoy this line of work.

They highlight that the social aspect of wedding photography keeps them going week in and week out. “I find weddings fun and happy so generally that’s the reason why – everyone’s happy 99 percent of the time”, Leon says.

Petrina gleefully said that she would beam with pride whenever a bride or groom changes their social media profile pictures to either a photograph or wedding video screenshot taken by A Merry Moment. “It’s little things like that make us feel appreciated for our efforts. It’s like a pat on the back”, Petrina says.

By this point, you’d be forgiven for thinking that these wedding gurus have tied the knot a long time ago, but they’re choosing to take things slow instead. They got to know each other in a more millennial-esque fashion a decade ago, with Petrina constantly providing feedback to Leon regarding a foodie website that he was an administrator of, be it a bug or a malfunctioning hyperlink.

“We were kinda online…but not Tinder!” Petrina warns.

Their chemistry is obvious to even the most jaded individual and it’s no surprise that so many couples have engaged them despite how new they are to the scene. 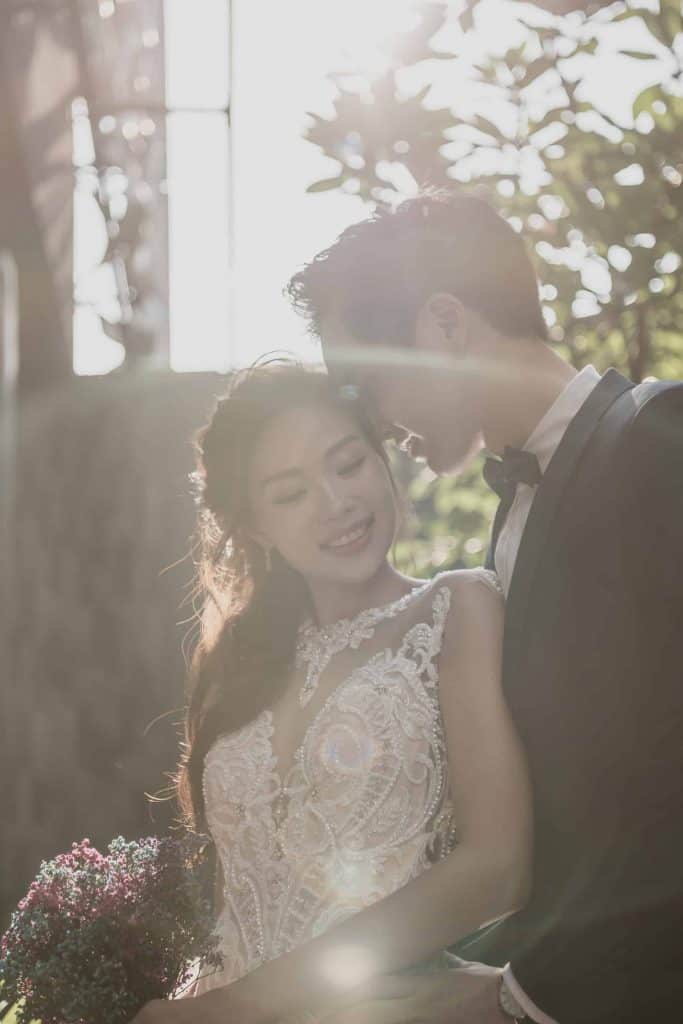 As a word of caution, Leon and Petrina mentioned that budding wedding photographers should love weddings more than photography if they wanted to succeed, given how competitive the industry is.

According to Petrina, “You have to connect with the couple and take into consideration the people that are present. It can’t just be you trying to create art and forgetting about them”. Leon summed it up, saying that “You must like people”.

Perhaps that’s why this duo has created more than just a few merry moments for the couples who have engaged them through the years.

Are The HIP And EASE Programs By HDB As Good As They Sound?